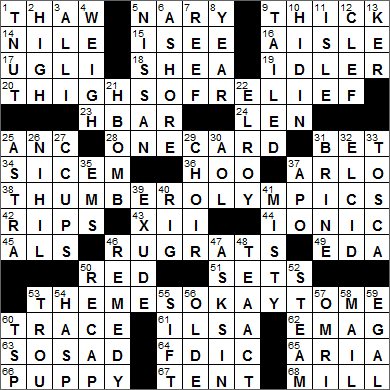 CROSSWORD SETTER: Ned White
THEME: Th-sound from S … each of today’s themed answers are common phrases starting with a word beginning with S, but that S-word has been changed to similar sounding TH-word:

1A. With 68-Across, release philosopher John Stuart from cryonic suspension? : THAW
68A. See 1-Across : MILL (from “saw mill”)

20A. Turkey servings for the famished? : THIGHS OF RELIEF (from “sighs of relief”)
38A. Quadrennial competition for hitchhikers? : THUMBER OLYMPICS (from “Summer Olympics”)
53A. TV critic’s approval of a show’s opening tune? : THEME’S OKAY TO ME (from “seems okay to me”)

Today’s Wiki-est, Amazonian Googlies
Across
1. With 68-Across, release philosopher John Stuart from cryonic suspension? : THAW
(68A. See 1-Across : MILL)
John Stuart Mill was a philosopher from Britain who is particularly remembered for defining liberty as the freedom of the individual.

14. Abu Simbel’s waterway : NILE
Abu Simbel is a location in southern Egypt, the site of two temples carved out of a mountainside. The two rock temples had to be relocated to Abu Simbel in 1968 to save them from being submerged in the water above the Aswan High Dam that was being built across the Nile River.

17. Hybrid fruit : UGLI
The ugli fruit is a hybrid of an orange and a tangerine, first discovered growing wild in Jamaica where most ugli fruit comes from today. “UGLI” is a trademark name that is a variant of “ugly”, a nod to the fruits unsightly wrinkled rind.

18. ___ butter (moisturizer) : SHEA
“Shea butter” is a common moisturizer or lotion used as a cosmetic. It is a fat that is extracted from the nut of the African shea tree. There is evidence that shea butter was used back in Cleopatra’s Egypt.

25. Mandela’s org. : ANC
As a young man, Nelson Mandela led the armed wing of the African National Congress (ANC). Mandela was eventually arrested and admitted to charges of sabotage and was sentenced to life in prison in 1964. He remained behind bars for 27 years, mainly in the infamous prison on Robben Island. As the years progressed, Mandela became a symbol of the fight against apartheid. He was released in 1990, and immediately declared his commitment to peace and reconciliation with South Africa’s white minority population. Mandela was elected president of the Republic of South Africa (RSA) in 1994, an office that he held until 1999. Nelson Mandela passed away on December 5, 2013.

34. Order to attack : SIC ‘EM
“Sic ’em” is an attack order given to a dog, instructing the animal to growl, bark or even bite. The term dates back to the 1830s, with “sic” being a variation of “seek”.

44. Classical column style : IONIC
The Ionic was one of the three classical orders of architecture, the others being the Doric and the Corinthian. An Ionic column is relatively ornate. It usually has grooves running up and down its length and at the top there is a “scroll” design called a “volute”. The scroll motif makes Ionic columns popular for the design of academic buildings. The term “Ionic” means “pertaining to Ionia”, with Ionia being an ancient territory that is located in modern-day Turkey.

45. Sharpton and Roker : ALS
The Reverend Al Sharpton is a high-profile Baptist minister and civil rights activist, with his own radio talk show. Sharpton preached his first sermon when he was only 4-years-old.

Al Roker is best known as the meteorologist on the “Today” show on NBC. He has successfully branched out from that platform though, and even co-wrote a novel called “The Morning Show Murders”, about a celebrity chef and TV host who get entangled in mystery. Topical stuff …

49. Author LeShan : EDA
Eda LeShan wrote “When Your Child Drives You Crazy”, and was host of the PBS television show “How Do Your Children Grow?”

51. Court units : SETS
There might be three or five sets in a tennis match.

61. “Casablanca” heroine : ILSA
Ilsa Lund was played by Ingrid Bergman in the 1942 movie “Casablanca”. I love the words of one critic describing the chemistry between Bogart and Bergman in this film: “she paints his face with her eyes”. Wow …

64. Bank-protecting agcy. : FDIC
During the Great Depression, President Franklin D. Roosevelt signed into law the Banking Act of 1933. The legislation established the Federal Deposit Insurance Corporation (FDIC), intended to be a temporary government corporation that provided insurance on deposits made by customers of qualified financial institutions. The first accounts to be covered, in 1934, had an insurance limit of $2,500. Since the financial crisis of 2008, that limit is $250,000.

“The Tender Land” is an Aaron Copland opera that premiered in 1954 in New York. “The Tender Land” is set in the American Midwest during the 1930s. Copland was inspired to compose the opera after reading “Let Us Now Praise Famous Men” by James Agee, which includes Depression-Era photographs taken by Walker Evans.

Down
5. Yokohama auto giant : NISSAN
Nissan is the second largest car manufacturer in its home market of Japan, surpassing even Honda in 2011, but still behind Toyota. Nissan used to sell under the brand name “Datsun”. Nissan’s luxury brand is Infiniti.

Yokohama is the second-most populous city in Japan. Yokohama lies on Tokyo Bay and is just a 40-minute drive from the nation’s capital.

11. Capri, e.g. : ISLE
The island of Capri off the coast of Southern Italy has been a tourist resort since the days of ancient Rome. Capri is home to the famous Blue Grotto, a sea cave that is illuminated with sunlight that’s colored blue as it passes through the seawater into the cave. Natives of Capri are known as Capriotes.

12. G ___ : CLEF
Clef is the French word for “key”. In music, a clef is used to indicate the pitch of the notes written on the stave. Usually, a G clef is used for high parts, a C clef for middle parts and an F clef for low parts.

21. Eniwetok blaster, informally : H-BOMB
There are two classes of nuclear weapons, both of which get the energy for the explosion from nuclear reactions. The first nuclear bombs developed, called atomic bombs (A-bombs), use fission reactions. Uranium nuclei are split into smaller nuclei with the release of an awful lot of energy in the process. The second class of nuclear weapons are fusion bombs. These devices are called thermonuclear weapons or hydrogen bombs (H-bombs). In a fusion reaction, the nuclei of hydrogen isotopes are fused together to form bigger nuclei, with the release of even greater amounts of energy than a fission reaction.

Enewetak Atoll is an atoll consisting of 40 islands in the Marshall Islands in the northern Pacific Ocean. Enewetak Atoll was the site of 43 nuclear test by the US from 1946 to 1958, including the test of the first ever hydrogen bomb. That H-bomb test in 1952 completely vaporized one of the islets in the atoll.

22. The Jetsons’ son : ELROY
“The Jetsons” is an animated show from Hanna-Barbera that had its first run in 1962-1963, and then was recreated in 1985-1987. When it was debuted in 1963 by ABC, “The Jetsons” was the network’s first ever color broadcast. “The Jetsons” are like a space-age version of “The Flintstones”. The four Jetson family members are George and Jane, the parents, and children Judy and Elroy. Residing with the family are Rosie the household robot, and Astro the pet dog.

26. Zero, to Nero : NIHIL
“Nihil” is the Latin word for “nothing, and is a term we’ve absorbed into English. “Nihil” is also the root from which we get our term “nil”.

The Roman emperor Nero had quite the family life. When Nero was just 16-years-old he married his stepsister, Claudia Octavia. He also had his mother and step-brother executed.

32. Charlton Heston title role : EL CID
“El Cid” is an epic film released in 1961 that tells the story of the Castilian knight who was known as El Cid. The two big names at the top of the cast were Charlton Heston and Sophia Loren, but just who was the biggest star? When Loren discovered that a huge billboard promoting the movie in Times Square showed that her name was below Heston’s, she sued the movie’s producers.

33. Opera that premiered in Rome in 1900 : TOSCA
Unlike so many operas, “Tosca” was a big hit right from day one, when it was first performed in 1900 at the Teatro Costanzi in Rome. “Tosca” is currently the eighth-most performed opera in America, although I’ve only seen it once myself.

46. Aspirin, for a headache : REMEDY
Aspirin was a brand name for the drug acetylsalicylic acid. Aspirin was introduced by the German drug company Bayer AG in the late 1800s. As part of the war reparations paid by Germany after WWI, Bayer AG lost the use of the trademark “Aspirin” (as well as the trademark Heroin!) and it became a generic term.

48. Cause of a 1773 “party” : TEA ACT
The famous destruction of tea in Boston Harbor to protest against the Tea Act took place on December 16, 1773. The action was referred to as the “destruction of the tea” for decades, and it wasn’t until 1834 that the term “Boston Tea Party” first appeared in print.

52. Cook, as dim sum : STEAM
Dim sum is a Chinese cuisine made up of small portions of various dishes. The tradition of serving dim sum is associated with the serving of tea, when small delicacies were offered to travelers and guests along with tea as a refreshment. The name “dim sum” translates as “touch the heart” implying that dim sum is not a main meal, just a snack “that touches the heart”.

The first recorded mooning incident took place in 66 AD, during the First Roman-Jewish War. Roman soldiers decided to moon Jewish pilgrims as they traveled to the Jewish Temple in Jerusalem.

57. Father of King Ahab : OMRI
Omri was the sixth king of Israel, and was succeeded by his son Ahab.

59. Even, to Yvonne : EGAL
“Égal” is the French word for “equal, alike”, and a word we sometimes use in English. The national motto of France is “Liberté, égalité, fraternité”, meaning “Liberty, equality, fraternity (brotherhood).