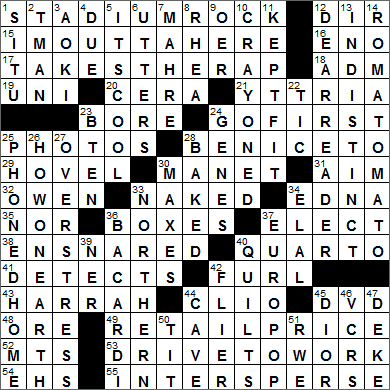 Today’s Wiki-est, Amazonian Googlies
Across
1.: Queen’s music: STADIUM ROCK
Queen is an English rock band that was formed back in 1970. With the help of lead singer Freddie Mercury (now deceased), Queen has a long list of great hits, including “Bohemian Rhapsody”, “We Will Rock You” and “We Are the Champions”. “Bohemian Rhapsody” spent a total of nine weeks at number one in the UK.

16.: Musician with the 2012 album “Lux”: ENO
Brian Eno started out his musical career with Roxy Music. However, Eno’s most oft-played composition (by far!) is Microsoft’s “start-up jingle”, the 6-second sound you hear when the Windows operating system is booting up. Eno might have annoyed the Microsoft folks when he stated on a BBC radio show:
I wrote it on a Mac. I’ve never used a PC in my life; I don’t like them.

19.: Oxford, e.g., to its students: UNI
In Australia (Down Under) and in the British Isles the term “Uni” is routinely used for “university”.

23.: “A person who talks when you wish him to listen,” per Ambrose Bierce: BORE
Ambrose Bierce was, among other things, an American satirist. He wrote a satirical lexicon called “The Devil’s Dictionary” published in 1911. The book is still popular today, with an updated version released in 2009. It includes “new” definitions from Bierce that were not included in his original work. Roy Morris, Jr. wrote a biography about Bierce called “Ambrose Bierce: Alone in Bad Company”.

30.: Artistic friend of Zola: MANET
Édouard Manet was a French painter whose works are mainly classified as Realist. Manet was friends with Impressionists masters like Edgar Degas, Claude Monet and Pierre-Auguste Renoir and greatly influenced the Impressionist movement. The list of Manet’s marvelous paintings includes “Le Déjeuner sur l’Herbe”, “Le Repose” and “A Bar at the Folies-Bergère”.

32.: Poet Wilfred ___: OWEN
Wilfred Owen was an English soldier and noted poet, famous for writing realistic poetry about the tragedies of trench warfare during WWI. Owen was killed in action only one week before the war ended, so most of his work was published posthumously.

34.: Buchanan in a bookstore: EDNA
Edna Buchanan is an author mainly of crime mystery novels. Buchanan also worked as a crime journalist for “The Miami Herald”.

40.: Certain book, sizewise: QUARTO
Some common book formats/sizes are folio, octavo and quarto. For a quarto book, eight pages of text are printed, four pages on each side of a “full-size” piece of paper. The pages are formed by folding the sheet of paper two times in half, giving a group of eight pages printed on four leaves (after separation). The size of the resulting pages of course depends on the size of the original sheet, but each page is one quarter the size of that original (hence the name quarto). Nowadays the quarto size refers to books that are about twelve inches tall.

43.: Pioneer in the Nevada gaming industry: HARRAH
Like me, some of you may have visited the William F. Harrah Automobile Museum in Reno, Nevada. When Harrah was just a lad, his father bought him his first car, but it was stolen and stripped down for parts. When that happened he apparently swore to his sister that he would earn enough money to own a duplicate of every car his family ever earned. I think he came through with that one …

44.: One of its categories is Agency of the Year: CLIO
The Clio Awards are the Oscars of the advertising world and are named after Clio, the Greek Muse of History. Clio was also the recorder of great deeds, the proclaimer and celebrator of great accomplishments and a source of inspiration and genius. The Clio Awards were first presented in 1959.

52.: Washington and McKinley: Abbr.: MTS
Mount Washington in New Hampshire is the highest peak in the northeast of the country. It is located in the state’s White Mountains, in the Presidential Range. The Presidential Range comprises the highest peaks in the White Mountains, most of which are named for US Presidents including: Washington, Eisenhower, Monroe, Jefferson, Adams, Quincy Adams and Madison.

Denali means “the high one” in the native Athabaskan language, and is now the name used for Mount McKinley. I was surprised to learn that there is a Denali State Park, as well as the Denali National Park. The two are located adjacent to each other (which makes sense!). The State Park is undeveloped for all practical purposes, with just a few campgrounds and trailheads.

Down
1.: Archaeologists often find what they’re looking for in this: SITU
“In situ” is a Latin phrase meaning “in the place”, and we use the term to mean “in the original position”.

2.: Counterfeiter fighter, informally: T-MAN
A T-man is a law-enforcement agent of the US Treasury (the “T” stands for Treasury).

3.: Isao of golf: AOKI
Isao Aoki is one of Japan’s greatest golfers, now playing on the senior circuit. Aoki’s best finish in a major tournament was runner-up to Jack Nicklaus in the 1980 US Open.

7.: Skiing twins’ surname: MAHRE
Phil Mahre is one of the great alpine ski racers, a native of Yakima, Washington. Phil’s twin brother Steve was also a skier on the World Cup circuit.

8.: Sister of Phoebe, in myth: RHEA
In Greek mythology Rhea was one of the Titans. She was the sister and husband of Cronus, and together they had six children, the last of which was Zeus. Cronus swallowed all of his children as soon as they were born, except for Zeus, who Rhea managed to hide from her husband.

Phoebe was one of the original Titans of Greek mythology i.e. one of the children of Uranus and Gaia. Phoebe married her brother Coeus, and together they had two daughters, Leto and Asteria.

9.: “Or softly lightens ___ her face”: Byron: O’ER
George Gordon Byron, known simply as “Lord Byron”, was an English poet active in the early 1800s. Byron was equally as famous for his poetry as he was for the wild excesses in his personal life. Byron lived much of that life outside of England, and fought for revolutionaries in both Italy and Greece. He died from a fever contracted while fighting for the Greeks against the Ottomans.

“Or softly lightens o’er her face” is a line from the 1814 poem “She Walks in Beauty” by Lord Byron.

“She Walks in Beauty” is one of the most famous poems written by Lord Byron. The poem is very descriptive of an elegant and beautiful woman. He wrote it the day after seeing his cousin, who was in mourning, walking by in a black dress set with spangles. The opening lines are:
She walks in beauty, like the night
Of cloudless climes and starry skies

14.: Option for a marinara base: ROMA TOMATO
The Roma tomato isn’t considered to be an heirloom variety, but it is very popular with home gardeners, especially those gardeners that don’t have a lot of space. It is a bush type (as opposed to vine type) and needs very little room to provide a lot of tomatoes.

Italians use the term “marinara” not for a sauce, but in the name of a recipe. For example, “spaghetti alla marinara” would be a spaghetti dish. The literal translation of the name of this dish would be “mariner’s spaghetti”. The sauce that we call “marinara” is called “salsa di pomodoro” in Italy.

23.: Old bomber: B-TEN
The Martin B-10 bomber entered service in 1934. It was the first bomber to have retractable landing gear, an internal bomb bay and a powered gun turret. It was built for speed and was 50% faster than its predecessor biplane bombers, and at the time of its introduction, the B-10 was so fast it could outpace any fighter in the air.

24.: A lot of what makes you you: GENES
A gene is a section of a chromosome that is responsible for a particular characteristic in an organism. For example, one gene may determine eye color and another balding pattern. We have two copies of each gene, one from each of our parents, with each copy known as an allele.

34.: Hebrew for “to the skies”: EL AL
El Al Israel Airlines is the flag carrier of Israel. The term “el al” translates from Hebrew as “to the skies” or “skyward”.

36.: Rival of Captain Morgan: BACARDI
The Bacardi company is still family-owned and operated, and is based in Hamilton, Bermuda. The company was founded in Santiago de Cuba and became successful by selling a refined form of rum, something new to a market that was used to a crude dark rum. The Bacardi family opposed the Castro regime as it came to power, so the company had to relocate to Bermuda.

The Captain Morgan brand of rum comes from Jamaica in the West Indies. It is named after the privateer from Wales, Sir Henry Morgan, who plied his trade in the Caribbean in the 17th century.

37.: Abba’s music: EUROPOP
Europop is a genre of pop music that is mainly associated with Sweden, but also applies to several other European countries. The most famous group associated with the genre is ABBA.

39.: ___ Tamid (ever-burning synagogue lamp): NER
“Ner tamid” is the Hebrew term for a sanctuary lamp, although it is often referred to in English as “eternal flame”.

47.: Rink fooler: DEKE
A deke, also known as a dangle, is a technique used to get past an opponent in ice hockey. “Deke” is a colloquial shortening of the word “decoy”.

51.: Inits. of Thoreau’s mentor: RWE
Ralph Waldo Emerson was an essayist and poet who was active in the mid-1800s. Most of the essays that Emerson wrote were composed originally as lectures and then revised for print.