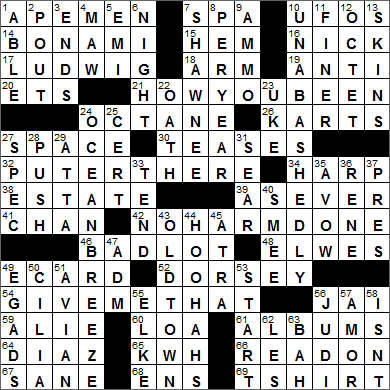 CROSSWORD SETTER: Jim Peredo
THEME: T-Shirt Message … we get a message that we might read on a T-SHIRT by using the last word in each of today’s themed answers i.e. BEEN THERE! DONE THAT!

Today’s Wiki-est, Amazonian Googlies
Across
1. Missing links APE-MEN
The term “missing link” is usually applied to the concept that there existed some form of animal that is a hybrid between apes and humans. The idea that there was some “ape-man” is discounted these days by the scientific community, which now favors the theory of evolution.

14. Cleanser brand that “hasn’t scratched yet” BON AMI
Bon Ami cleanser was introduced just a few years after Bon Ami soap went to market in 1886. The cleanser was marketed by emphasising its “non-scratch” properties. The label showed a chick coming out of an egg, the idea being that a newly hatched chick hasn’t yet scratched the ground looking for worms and insects.

16. Styptic pencil target NICK
Alum is common name for the chemical potassium aluminium sulfate. Styptic pencils can contain alum as the active ingredient that stems bleeding from a small cut. The alum acts as an astringent, a compound that shrinks some body tissues.

17. Architect ___ Mies van der Rohe LUDWIG
Ludwig Mies van der Rohe was a German architect who was routinely referred to simply as “Mies”. I am a philistine, I know, but Mies’ buildings look very plain to me. However, he did come up with two far-from-plain sayings: “less is more” and “God is in the details”.

18. Half an exorbitant fee? ARM
Something very expensive is said to cost “an arm and a leg”.

19. Prefix with matter ANTI-
In the world of particle physics, antimatter is made up of particles that have the same mass as particles of ordinary matter, but with the opposite charge and quantum spin. Mixing matter and antimatter causes the annihilation of both, with a release of energy equal to the mass of the particles according to Einstein’s equation E=mc2.

20. Riders in 10-Across ETS
Extraterrestrial (ET)

24. Fuel rating OCTANE
The difference between a premium and regular gasoline is its octane rating. The octane rating is measure of the resistance of the gasoline to auto-ignition i.e. it’s resistance to ignition just by virtue of being compressed in the cylinder. This auto-ignition is undesirable as multiple-cylinder engines are designed so that ignition within each cylinder takes place precisely when the plug sparks, and not before. If ignition occurs before the spark is created, the resulting phenomenon is called “knocking”.

30. Coquettish sorts TEASES
A “coquet” is a male flirt, with “coquette” being the name for a female flirt. The word comes from French, and is the diminutive of “coq”, the word for a cock. A cock might well be accused of “strutting his stuff” around the chicken run.

41. Actor Jackie who’s his own stuntman CHAN
Jackie Chan is an actor from Hong Kong who is noted for his action and martial arts films. When Chan was 17-years-old he featured as a stunt actor in Bruce Lee movies. He also starred in the 1982 Hong Kong action film “Dragon Lord” which includes a fight scene that required an amazing 2900 takes, a record in the movie industry.

52. Sinatra’s big band leader DORSEY
Tommy Dorsey was a jazz trombonist and bandleader in the Big Band era, and the younger brother of bandleader Jimmy Dorsey. One of Tommy’s singers was Frank Sinatra, whom he hired from bandleader Harry James in 1940. Sinatra claimed that he learned breath control from watching Tommy Dorsey play the trombone.

56. ___ alai JAI
Even though jai alai is often said to be the fastest sport in the world because of the speed of the ball, in fact golf balls usually get going at a greater clip. Although, as a blog reader once pointed out to me, you don’t have to catch a golf ball …

64. Cameron of “Bad Teacher” DIAZ
The Hollywood actress Cameron Diaz started out her professional life as a model. Diaz’s first acting role was in the 1994 film “The Mask”, starring alongside Jim Carrey.

“Bad Teacher” is a 2011 comedy starring Cameron Diaz as a middle school teacher trying to skate by in her teaching job while she earns enough money for breast enlargement surgery.

65. Electric bill abbr. KWH
The kilowatt hour (kWh) is a unit of energy, made up of the product of power (kilowatts – kW) and time (hour – h). We see “kWh” all the time, on our electric bills.

68. Recent U.S.N.A. graduate: Abbr. ENS
Ensign is (usually) the most junior rank of commissioned officer in the armed forces. The name comes from the tradition that the junior officer would be given the task of carrying the ensign flag.

6. Like all World Series games, now NIGHT
The first World Series game schedule to be played at night was in 1971, at Three River Stadium in Pittsburgh. Night games are now the norm, a choice driven by the size of the television audience. The last day game was Game 6 of the 1987 World Series.

9. Bandoleer filler AMMO
A “bandolier” (also “bandoleer”) is a belt with small pockets that hold ammunition. A bandolier is usually worn over the shoulders, rather than around the waist. The term derives from the Spanish “banda” meaning “scarf, sash”.

12. The black pawns, e.g. OCTET
In the game of chess, the pawns are the weakest pieces on the board. A pawn that can make it to the opposite of the board can be “promoted” to a piece of choice, usually a queen. Using promotion of pawns, it is possible for a player to have two or more queens on the board at one time. However, standard chess sets come with only one queen per side, so a captured rook is often used as the second queen by placing it on the board upside down.

13. Washington pro team, informally SKINS
The Washington Redskins NFL team were founded as the Boston Braves in 1932. The following year, the team moved to Fenway Park and the franchise name was changed to the Boston Redskins. The Redskins relocated to Washington in 1937.

23. “Aloha Oe” instrument, for short UKE
“Aloha ‘Oe” is a song of Hawaii composed by Liliuokalani, the last monarch of Hawaii and her only queen. The title translates as “Farewell to Thee”.

25. Part of C.D.: Abbr. CERT
A certificate of deposit (CD) is like a less-flexible and higher-paying savings account. Instead of depositing money into a savings account and earning interest periodically, one can open a CD. With a CD one deposits a minimum amount of money but must leave it there for a specified length of time. In return for committing the funds for a fixed period, one is given a higher interest rate than a savings account and can redeem that interest and the initial deposit when the term has expired. CDs are relatively low-risk investments as they are FDIC insured, just like savings accounts.

36. Tennis great Lacoste RENE
René Lacoste was a French tennis player who went into the clothing business, and came up with a more comfortable shirt that players could use. This became known as a “tennis shirt”. When it was adopted for use in the sport of polo, the shirts also became known as “polo shirts”. And then the “golf shirt” is basically the same thing.

37. Secret Service’s charge: Abbr. PRES
The Secret Service was created by President Abraham Lincoln in 1865, with the mission of fighting currency counterfeiters. The additional task of protecting the US President was added by Congress in 1902 following the assassination of President William McKinley in the prior year. Only one Secret Service agent has given his life in the course of an assassination attempt. That was Private Leslie Coffelt, who was killed when two Puerto Rican nationalists tried to assassinate President Harry S. Truman in 1950 while he was residing in Blair House.

40. Jolly Roger crewman SMEE
In J. M. Barrie’s play and novel about Peter Pan, Smee is one of Captain Hook’s pirates and is Hook’s right-hand man. Smee is described by Barrie as being “Irish” and “a man who stabbed without offence”. Nice guy! Captain Hook and Smee sail on the pirate ship called the Jolly Roger.

45. Gillette brand ATRA
Fortunately for crossword setters, the Atra razor was introduced by Gillette in 1977. The Atra was sold as the Contour in some markets and its derivative products are still around today.

47. Halsey or Nimitz: Abbr. ADM
Vice Admiral William Halsey’s flagship was the USS Enterprise, the ship he was on board in the Pacific when the Japanese attacked Pearl Harbor. Apparently right after the attack, he remarked, “Before we’re through with ’em, the Japanese language will only be spoken in hell.”

Fleet Admiral Chester Nimitz is perhaps best remembered as the commander of fleet operations in the Pacific in WWII. Above and beyond the many honors formally awarded to Admiral Nimitz, he was chosen in 1945 to sign the Japanese Instrument of Surrender on the decks of the Missouri, as the official representative of his country.

50. Eyelashes, anatomically CILIA
“Cilia” is the Latin for “eyelash”.

51. For the birds? AVIAN
“Avis” is the Latin word for a bird, giving rise to our adjective “avian” meaning “relating to birds”.

55. Sommer of “A Shot in the Dark” ELKE
Elke Sommer is a German-born actress who was at the height of her success on the silver screen in the sixties. Sommer won a Golden Globe as Most Promising Newcomer Actress for her role opposite Paul Newman in 1964’s “The Prize”. She also sings and has released several albums. Now Sommer focuses on painting, producing artwork that is strongly influenced by the work of Marc Chagall.

“A Shot in the Dark” is the second of “The Pink Panther”series, released in 1964. The main character is Inspector Jacques Clouseau, played brilliantly by Peter Sellers. This one is a lot of fun …

56. Oscar winner Dench JUDI
Dame Judi Dench is an outstanding English actress, known for decades in her home country mainly as a stage and television actress. Dench’s film career took off in the nineties with a relatively trivial role as “M” in the James Bond series of films. Since then she has played leading roles in several excellent movies including “Shakespeare in Love”, “Mrs. Brown” and “Notes on a Scandal”.

62. WKRP’s Nessman LES
Les Nessman is a character in the sitcom “WKRP in Cincinatti”. Nessman is the shy balding guy who always wears a bow tie.