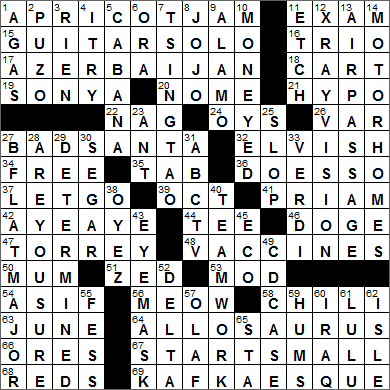 Today’s Wiki-est, Amazonian Googlies
Across
16. The Rice Krispies mascots, e.g. : TRIO
Snap, Crackle and Pop are three elves employed as the mascots for Kellogg’s Rice Krispies. The trio first appeared in an ad campaign in 1933, although the phrase “snap, crackle and pop” had been used for the cereal for some time in radio ads. By the way, the elves are selling “Rice Bubbles” in Australia, and the elves have different names in other parts of the world (like “Cric!, Crac! and Croc! in Quebec).

17. Georgia neighbor : AZERBAIJAN
Azerbaijan is a former Soviet Republic lying on the Caspian Sea just northeast of Iran. The Azerbaijan Democratic Republic established in 1918 became the Muslim world’s first democratic and secular state. It didn’t last long though, as two years later it was absorbed into the Soviet Union.

20. City whose name is pronounced like the natives’ word for “Where is …?” : NOME
Nome, Alaska has over 3,500 residents, the majority of whom are Native American. The next largest ethnic group in Nome is the white population. The origin of the name “Nome” isn’t well understood, it seems. One theory is that was a misunderstanding of the local Inupiaq word for the phrase “Where at?”

21. Something an aichmophobe fears, briefly : HYPO
Aichmophobia is a morbid fear of sharp or pointed objects, like perhaps a needle. Some aichmophobes can even fear a pointed finger. “Aichme” is Greek for “point”

27. 2003 Billy Bob Thornton crime film : BAD SANTA
“Bad Santa” is a black comedy, not one I really enjoyed, starring Billy Bob Thornton as the not-so-nice Santa Claus. If you want to see an unrated version of the film, you can just buy the DVD and watch the special feature called “Badder Santa”.

I’ve always thought that the actor Billy Bob Thornton really knows how to give an understated performance, and he does it really well. Thornton came to the public eye as actor and screenwriter for the 1996 movie “Slingblade”. He won an Academy Award for screenwriting for that film. Thornton has been married five times in all, most famously to the actress Angelina Jolie.

32. Language of Middle-earth : ELVISH
Middle-earth is the setting for J. R. R. Tolkien’s fantasy novels “The Hobbit” and “The Lord of the Rings” series.

34. Craigslist section : FREE
Craigslist is an online network of communities that features classified advertisements organized geographically. Craigslist was started by Craig Newmark in 1995, originally as an email distribution list for his friends who lived and worked in the San Francisco Bay Area.

35. It’s usually closed before leaving : TAB
When we “run a tab” at a bar say, we are “running a tabulation”, a listing of what we owe. Such a use of “tab” is American slang that originated in the 1880s.

39. Presidential debate mo. : OCT
The first presidential election debate is considered to be the famous 1960 event in which Senator John F. Kennedy faced off against Vice President Richard Nixon. There were other debates that are considered precursors to the 1960 exchange, dating back to the time of Abraham Lincoln, but these debates weren’t between candidates from opposing parties for the office of president.

41. Father of Paris : PRIAM
Priam was king of Troy during the Trojan War. Reputedly, Priam was father to fifty sons and many daughters with his many wives. His eldest son and heir to the throne was Hector. Paris was another of Priam’s sons, the man who caused the Trojan War by eloping with Helen, Queen of Sparta.

46. Ruler with a palace near St. Mark’s : DOGE
Doges were the elected chief magistrates of the former republics of Venice and Genoa.

47. San Diego’s ___ Pines, site of the 2008 U.S. Open : TORREY
Torrey Pines Golf Course sits on the Pacific Coast in La Jolla in Southern California. The course takes its name from a rare tree found in the area called the Torrey Pine.

50. On the q.t. : MUM
The phrase “mum’s the word” has been around since the early 1700s. “Mum” has been used to mean “silent” for centuries, the idea being that “mum” is the sound made when the lips are tightly sealed.

54. Valley girl’s “no” : AS IF
The original “valley girls” were the young, middle-class females living in San Fernando Valley in Southern California.

58. Kung Pao chicken ingredient : CHILI
Sichuan (also Szechuan) is a province in southwest China. Sichuan is noted for its cuisine, which is hot and spicy as it uses plenty of garlic, chili peppers and the Sichuan peppercorn. A famous Szechuan dish in the US is Kung Pao chicken.

64. Literally, “different lizard” : ALLOSAURUS
The most popular dinosaurs depicted in the movies, especially the older ones, are the Tyrannosaurs and the Allosauruses. They look very similar, with the former being the really big guy.

68. Midwest squad : REDS
The Red Scare (i.e. anti-communist sentiment) following WWII had such an effect on the populace that it even caused the Cincinnati baseball team to change its name from the Reds. The team was called the Cincinnati Redlegs from 1953-1958, as the management was fearful of losing money due to public distrust of any association with “Reds”.

69. Bizarre and alienating : KAFKAESQUE
Franz Kafka was born in 1883 in Prague, then part of Bohemia and today the capital of the Czech Republic. Kafka is known as one of the greatest novelists who worked in the German language, and even has an adjective named after him. Something that is “kafkaesque” is senseless, disorienting and may have menacing complexity. As it was for many great artists, Kafka’s fame came after his death when much of his work was published.

Down
2. Two-time Oscar-winning screenwriter : PUZO
The novelist and screenwriter Mario Puzo, was best known for his book “The Godfather”, which he also co-adapted for the big screen. His name is less associated with some very famous screenplays that he wrote, including “Earthquake”, “Superman” and “Superman II”.

3. Love at the French Open, essentially : RIEN
“Rien” is French for “nothing”.

5. Changing place : CABANA
Our word “cabana” comes from the Spanish “cabaña”, the word for a small hut or a cabin.

6. Start of an “Ave Maria” line : ORA
“Ave Maria” (“Hail Mary” in English) is the prayer at the core of the Roman Catholic Rosary, which itself is a set of prayers asking for the assistance of the Virgin Mary. Much of the text of the “Hail Mary” comes from the Gospel of Luke. The words in Latin are:

7. Beer named for a port on the Yellow Sea : TSINGTAO
I think that Tsingtao is the first Chinese beer that comes to mind to most Westerners. Tsingtao Brewery was founded in 1903 by German settlers. The name “Tsingtao” is a European name for Qingdao, the port city where the brewery is headquartered in Shandong province.

Jojo was a man who thought he was a loner
But he knew it wouldn’t last.
Jojo left his home in Tucson, Arizona
For some California grass.

9. 1960 historical film written and directed by John Wayne, with “The” : ALAMO
“The Alamo” is a 1960 film, and very much a personal project for John Wayne. Wayne directed the movie, and put one and half million dollars of his own money into it (which he lost). Wayne wanted to play a small role in the film, so that he could focus on directing, as the film marked his directorial debut. But, other investors insisted on Wayne play the lead role of Davy Crockett as they felt they would have a better chance of recouping their money using the box office draw of the Wayne name.

23. Argentine ___ : ANT
The Argentine ant is native to Argentina and surrounding countries, although human travel has introduced it as an invasive species right across the world. Argentine ants rank amongst the world’s most destructive animal invaders.

30. “Popeye” cartoonist Elzie : SEGAR
Elzie Segar was a cartoonist who went by the name E. C. Segar. Segar was the man who created the strip “Thimble Theater”, home of the character Popeye.

31. Part of the Disney family, so to speak : ABC TV
The American Broadcasting Company (ABC) is the world’s largest broadcaster in terms of revenues. ABC was formed in 1943, created out of the former NBC Blue radio network.

33. “Falstaff” composer : VERDI
“Falstaff” is an opera by Giuseppe Verdi that draws on the character Falstaff from William Shakespeare’s “The Merry Wives of Windsor”. “Falstaff” was the maestro’s last opera, written while Verdi was in his 80s.

38. Attention-getter, in some rooms : OYEZ!
Town criers make public announcements on the streets, usually shouting “Oyez! Oyez! Oyez!” to attract attention. The term “oyez” derives from the Anglo-Norman word for “listen” and is used in this instance to mean “Hear ye!” “Oyez!” might also beused in a courtroom as the court’s proceedings are opened.

49. Obsolescent media holder : CD CASE
That means I must be obsolescent too …

52. It’s around the mouth : DELTA
A river delta is found at its mouth.

55. Own (up) : FESS
The term “fess” is most often seen as part of the phrasal verb “to fess up” meaning “to admit to something”. “Fess” is simply a shortened form of “confess”.

57. Dedicatee of a famous Tallinn church : OLAF
St. Olaf’s Church in Tallinn, the second largest city in Estonia, was originally built in the 12th century by Scandinavian settlers.

60. Setting for “Three Kings,” 1999 : IRAQ
“Three Kings” is a 1999 war movie set during the end of the Persian Gulf War in Iraq. The title characters are played by George Clooney, Mark Wahlberg and Ice Cube. I didn’t think much of this one …

61. Beaut : LULU
We call a remarkable thing or a person a “lulu”. The term is used in honor of Lulu Hurst, the Georgia Wonder, who was a stage magician active in the 1880s.