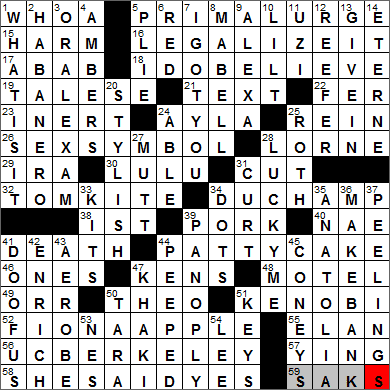 Today’s Wiki-est, Amazonian Googlies
Across
16. Debut Peter Tosh album, and a rallying cry for pot smokers : LEGALIZE IT
Peter Tosh was a musician from Jamaica, a member of the Wailers reggae band. Sadly, Tosh was murdered in a home invasion and extortion attempt in 1987.

17. Scheme for the start of a sonnet : ABAB
A sonnet is a short poem with varying rhyming schemes but always with 14 lines. The sonnet form has been around at least since the 13th century. The Shakespearean sonnet is composed of three quatrains (4 lines) and a final couplet (2 lines).

19. Pioneer of New Journalism : TALESE
Gay Talese is an American author, famous as a journalist in the sixties at “The New York Times”. His 1981 book “Thy Neighbor’s Wife” is a study of sexuality in America in the early fifties. Apparently, as research for the book, Talese had sexual relations with his own neighbor’s wife for several months at a sexuality resort in Southern California called Sandstone Retreat.

“New Journalism” was a style of news writing in the sixties and seventies that was pioneered by Tom Wolfe, and exemplified by the work of writers such as Truman Capote and Gay Talese. Authors writing in the New Journalism style tended to immerse themselves in a subject for several months and then reported in voices that were distinctly their own. The articles featured characters that were well developed and placed in vivid scenes. Such articles tended to appear in magazines rather than newspapers.

24. Cro-Magnon orphan of literature : AYLA
Ayla is a little Cro-Magnon girl who is orphaned and then adopted by a Neanderthal tribe, as told in “The Clan of the Cave Bear”, the first of a series of novels written by Jean Auel that set in prehistoric times. I haven’t read any of Auel’s books myself, but they are on my reading to-do list as my wife recommends them. They sound interesting …

26. Rihanna or Sharon Stone : SEX SYMBOL
The singer Rihanna was born and grew up on the island of Barbados and moved to the US when she was 16-years-old to pursue a singing career. “Rihanna” is her stage name, as she was born Robyn Rihanna Fenty. The name “Rihanna” is derived from the Welsh name “Rhiannon”.

28. Big name in late-night TV : LORNE
Lorne Michaels is a television producer, best known as the creator of “Saturday Night Live”. We can get some insight into Michaels’ character and demeanor by watching the show “30 Rock”. The character played by Alec Baldwin is inspired by Michaels.

30. Dandy : LULU
We call a remarkable thing or a person a “lulu”. The term is used in honor of Lulu Hurst, the Georgia Wonder, who was a stage magician active in the 1880s.

32. U.S. Open champion whose last name is a toy : TOM KITE
Tom Kite is a professional golfer from McKinney, Texas. Kite was a consistent money winner on the PGA circuit, and was the first to reach $6 million in winnings, as well as 7, 8 and 9 million dollars.

34. Artist and chess player who said “While all artists are not chess players, all chess players are artists” : DUCHAMP
Marcel Duchamp was a French artist whose works are associated with the Dadaist and Surrealist movements. One of his most celebrated “works” is simply what he called “readymade” art, a urinal which he titled “Fountain”. Even though this work is considered to be “a major landmark in 20th century art”, the original that was submitted for exhibition was never actually displayed and had been lost forever. Replicas were commissioned by Duchamp, and are on display in many museums around the world (enough said about that!). When in his early thirties, Duchamp effectively gave up practicing art and instead studied and played chess, almost to the exclusion of other activities.

38. The end? : -IST
Broadly speaking, “theism” is the belief that there is at least one god. The term is also used describe the belief in just one god, what is perhaps more accurately referred to as “monotheism”. As such, followers of Christianity, Judaism and Islam would be classified as theists.

40. McDonald’s denial : NAE
“Nae” is the Scottish vernacular for “no”.

44. It involves hand-to-hand coordination : PATTYCAKE
“Pattycake” or “Pat-a-Cake” is an old English nursery rhyme that is often accompanied by hand-clapping between two people:

47. Wish-Bone alternative : KEN’S
The food manufacturing company called Ken’s Foods is known for its salad dressings. As well as selling its own products, it is Ken’s Foods that manufactures the Newman’s Own brand under contract.

48. Lodging portmanteau : MOTEL
The term “motel” is a portmanteau of “motor” and “hotel”.

49. 1967 Calder Trophy winner at age 18 : ORR
Bobby Orr is regarded as one of the greatest hockey players of all time. By the time he retired in 1978 he had undergone over a dozen knee surgeries. At 31 years of age, he concluded that he just couldn’t skate anymore. Reportedly, he was even having trouble walking …

The Calder Memorial Trophy has been awarded annually since 1937 to most proficient player that year in the NHL. The trophy is named for former President of the NHL Frank Calder.

50. ___ Epstein, baseball V.I.P. known as “Boy Wonder” : THEO
Theo Epstein was hired as General Manager in 2002 by the Boston Red Sox. Epstein was only 28 years at the time, making him the youngest GM in the history of Major League Baseball.

52. Singer with the 1996 triple-platinum album “Tidal” : FIONA APPLE
Fiona Apple is a singer-songwriter and pianist from New York City.

55. Panache : ELAN
Our word “élan” was imported from French, in which language the word has a similar meaning to ours i.e “style” or “flair”.

56. Where Jason Kidd played college hoops : UC BERKELEY
Jason Kidd was a point guard playing in the NBA. He finished his career with the New York Knicks, and is now the head coach with the Brooklyn Nets.

Down
2. Certain chili : HABANERO
The habanero chili has a very intense flavor. Interestingly, the correct spelling of the chili’s name is “habanero”, although in English we often try to be clever and add a tilde making it “habañero”, which isn’t right at all …

3. Third degree for a third degree? : ORAL EXAM
“Third degree” is used to describe a particularly rough interrogation. We seem to be unsure where the expression originates, but there are theories. One is that it refers the third degree level of Freemasonry, which requires rigor and dedication to attain. Another theory is that it comes from Richard Sylvester who was Chief of Police for Washington, D.C. in the early 1900s. Sylvester saw the first degree of police procedure as arrest, the second degree as transportation to jail, and the third degree as interrogation.

4. One may prefer them to blondes : AMBERS
Blondes and ambers are styles of beer.

5. Bit of ballet instruction : PLIE
The French word for “bent” is “plié”. In the ballet move known as a plié, the knees are bent.

6. Like Tickle Me Elmo : RED
Tickle Me Elmo was a sensational fad in the late nineties, with stores raising prices dramatically above the recommended retail price to take advantage of demand. Reportedly, prices as high as $1500 were paid at the height of the craze. The toy’s manufacturer, Tyco, originally planned to market the “tickle” toy as Tickle Me Tasmanian Devil (after the “Looney Tunes” character), but then went with “Elmo” after they bought the rights to use “Sesame Street” names.

8. Parent company? : MA BELL
The term “Ma Bell” was of course used to describe the monopoly led by the American Bell Telephone Company and AT&T, that controlled telephone service right across the country. The name “Bell” is after Alexander Graham Bell, the inventor of the first practical telephone.

9. Internet traffic statistics company : ALEXA
Alexa Internet is a company focused on collecting and reporting on browsing behavior, primarily the browsing behavior of those Internet users who have the Alexa toolbar installed.

11. Strong arm : UZI
The first Uzi submachine gun was designed in the late 1940s by Major Uziel Gal of the Israel Defense Forces who gave his name to the gun.

12. Joint : REEFER
Marijuana cigarettes have been known as “reefers” since the twenties. It is thought that the term comes from either the Mexican Spanish for a drug addict (“grifo”), or from its resemblance to a rolled sail i.e. a sail that has been “reefed”.

The term “joint” has a long history in the drug world. The word originally came from French in which it is the past participle of the word for “to join”. It became an Anglo-Irish term for a side-room “joined” onto a main room in the early 1800s. Towards the end of the 19th century it was US slang for a small, shady establishment, such as an opium den. By the 1930s a joint was a hypodermic needle used to inject heroin, and soon after became the term for a marijuana cigarette.

25. With 29-Across, nest egg choice : ROTH
(29A. See 25-Down : IRA)
Roth Individual Retirement Accounts (Roth IRAs) were introduced in 1997 under a bill sponsored by Senator William Roth of Delaware, hence the name.

35. It was home to two Wonders of the Ancient World : ANATOLIA
Asia Minor is also known as Anatolia. It is the geographic part of Asia that protrudes out into the west, towards Europe, and is roughly equivalent to modern-day Turkey. Anatolia was home to two of the Seven Wonders of the Ancient World, namely the Temple of Artemis at Ephesus, and the Mausoleum at Halicarnassus.

39. Impressive range : PANOPLY
“Panoply” originally described the complete set of armor of a warrior, with the term coming from the Greek “pan-”meaning “all” and “hopla” meaning “arms”. We’ve been using “panoply” to mean “any splendid array” since the 1820s.

41. Tool : DOOFUS
“Doofus” (also “dufus”) is student slang that has been around since the sixties. Apparently the word is a variant of the equally unattractive term “doo-doo”.

“Tool” is one of those slang terms that I dislike immensely, even though it has been used since the 1600s. “Tool” is used to describe a socially inept person and is a reference to the male reproductive organ.

43. Oxygen user : AEROBE
An aerobe is an organism that lives in an environment rich in oxygen. An anaerobe on the other hand does not require oxygen for survival.

47. Yellow-brown shade : KHAKI
“Khaki” is an Urdu word, translating literally as “dusty”. The word was adopted for its current use as the name of a fabric by the British cavalry in India in the mid-1800s.

50. Fictional home five miles from Jonesboro : TARA
Rhett Butler hung out with Scarlett O’Hara at the Tara plantation in Margaret Mitchell’s “Gone with the Wind”. Tara was founded not far from the Georgia city of Jonesboro by Scarlett’s father, Irish immigrant Gerald O’Hara. Gerald named his new abode after the Hill of Tara back in his home country, the ancient seat of the High King of Ireland.

54. Historical figure a.k.a. Marse Robert : LEE
Robert E. Lee is of course renowned as a southern officer in the Civil War. Lee was a somewhat reluctant participant in the war in that he opposed the secession of his home state of Virginia from the Union. At the beginning of the war, President Lincoln invited Lee to take command of the whole Union Army but he declined, choosing instead to stay loyal to his home state. During the Civil War, Lee’s men referred to him affectionately as “Marse Robert”, with “marse” being slang for “master”.