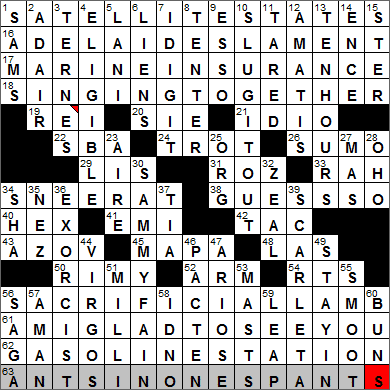 Today’s Wiki-est, Amazonian Googlies
Across
1. Romania and Bulgaria, once : SATELLITE STATES
Romania sits just east of Hungary and north of Bulgaria in Europe. Romania was formed from the union of two principalities in 1859, Moldavia and Wallachia. The Kingdom of Romania grew larger in size after WWI with the addition of three new regions, including the “vampirish” Transylvania.

Bulgaria is a country in Southeastern Europe lying on the west coast of the Black Sea. Bulgaria’s capital city is Sofia.

“Guys and Dolls” is a musical with music and lyrics by Frank Loesser. It was first produced on Broadway, in 1950, and ran for 1200 performances. The show was based on a book written by Jo Swerling and Abe Burrows. “Guys and Dolls” was chosen as winner of a Pulitzer in 1951, but the award was cancelled as Abe Burrows was having problems with the House Un-American Activities Committee at the time.

19. Sporting goods chain with the slogan “Get outside yourself” : REI
REI is acronym used by the sporting goods store called Recreational Equipment Inc. REI was founded in Seattle by Lloyd and Mary Anderson in 1938 as a cooperative that supplies quality climbing gear to outdoor enthusiasts. The first full-time employee hired by the Andersons was Jim Whittaker, who was the American to climb Mount Everest.

Potsdam is a city in Germany that lies just on the outskirts of the nation’s capital of Berlin. Famously, Potsdam was the site of a conference between Stalin, Churchill and Truman after the end of WWII in Europe.

21. Peculiar: Prefix : IDIO-
The prefix “idio-” indicates something peculiar, as in “idiosyncrasy”, a peculiarity exhibited by an individual or a group.

22. Start-up helper: Abbr. : SBA
The Small Business Administration (SBA) is a government agency with the mission of assisting small businesses. The SBA doesn’t give loans itself, but it does act as a guarantor under the right circumstances. The SBA was set up in 1953, and isn’t a favorite with fiscal conservatives.

26. Shoving matches? : SUMO
Sumo is a sport that is practiced professionally only in Japan, the country of its origin. There is an international federation of sumo wrestling now, and one of the organization’s aims is to have the sport accepted as an Olympic event.

29. Relative of une tulipe : LIS
“Lys” (also “lis”) is the French word for “lily”, as in “fleur-de-lys”, the heraldic symbol often associated with the French monarchy.

31. “Frasier” role : ROZ
Roz Doyle is a character in the wonderful sitcom “Frasier”. Roz is played, very ably, by the actress Peri Gilpin.

40. Mojo : HEX
“Hexen” is a German word meaning “to practice witchcraft”. The use of the word “hex” in English started with the Pennsylvania Dutch in the early 1800s.

The word “mojo”, meaning magical charm or magnetism, is probably of Creole origin.

41. Sister co. of Virgin : EMI
EMI was a British music company, with the acronym originally standing for Electric and Musical Industries.

Virgin Group is a huge multinational company that operates in the arenas of travel, entertainment and lifestyle. The company was started by Richard Branson and a partner as a record shop in 1970. The founders chose the name “Virgin” as they considered themselves “virgins” in the business world.

42. Middle square, maybe : TAC
When I was growing up in Ireland we played “noughts and crosses” … our name for the game tic-tac-toe.

43. Sea of ___ (view from Crimea’s eastern coast) : AZOV
The Sea of Azov lies east of the Crimean Peninsula and is linked to the larger Black Sea via the narrow Strait of Kerch. The Sea of Azov is the shallowest sea in the world, with the depth never going above forty-six feet.

45. Chart, in Cádiz : MAPA
Cádiz is a port city in southwestern Spain, in the autonomous community of Andalusia. Cádiz is a remarkable city geographically, in that it sits on a thin spit of land that juts out into the sea.

50. Frost-covered : RIMY
Rime is that beautiful coating of ice that forms on surfaces like roofs, trees and grass, when cold water freezes instantly under the right conditions.

Down
1. Some defensive weapons, in brief : SAMS
Surface-to-air missile (SAM)

2. “Love and Death on Long Island” novelist Gilbert : ADAIR
Gilbert Adair is a Scottish author. He wrote a translation of the book “La Disparition” by the French author Georges Perec, an interesting work in that it contains no instances of the letter “e”. Adair’s translation is called “A Void”, and in it the author also managed to avoid using the letter “e”. Remarkable …

3. Lead-tin alloys : TERNES
Terne is a lead-tin alloy that is used as a rust-protecting coat for steel.

6. Some claims : LIENS
A lien is the right that one has to retain or secure someone’s property until a debt is paid.

9. 62-Across option north of the border : ESSO
The brand name Esso has its roots in the old Standard Oil company as it uses the initial letters of “Standard” and “Oil” (ESS-O). The Esso brand was replaced by Exxon in the US, but ESSO is still used in many other countries.

11. Preweighed, in a way : TARED
“Tare” is the weight of a container that is deducted from the gross weight to determine the net weight, the weight of the container’s contents.

12. Very rarely heard instruments : AMATIS
The first of the Amati family to make violins was Andrea Amati, who lived in the 14th century. He was succeeded by his sons, Antonio and Girolamo. In turn, they were succeeded by Girolamo’s son, Nicolo. Nicolo had a few students who achieved fame making musical instruments as well. One was his own son, Girolamo, and another was the famed Antonio Stradivari.

25. Alternative to .net : .ORG
The .org domain was one of the six original generic top-level domains specified. The complete original list is:

30. Songwriters Hall of Fame member who wrote “April Love” : SAMMY FAIN
Sammy Fain was a composer of popular music from New York City. Fain mainly collaborated with lyricist Irving Kahal. Two of Fain’s more famous compositions are “Secret Love” (a favorite of mine) from “Calamity Jane” and the title song from the movie “Love Is a Many-Splendored Thing”.

34. Doo-wop syllable : SHA
Doo-wop developed in the 1940s and can be described as a vocal-based R&B music. Even though the style has been around since the forties, the name doo-wop wasn’t introduced until the early sixties.

36. One getting rid of possessions? : EXORCIST
An exorcist is a religious figure who is believed to be able to cast out demons that have possessed a person or perhaps a building.

“Third Watch” is a crime drama series about teams of police officers, firefighters and paramedics who worked the same 3pm – 11pm shift in a New York precinct. “Third Watch” originally aired from 1999 to 2005.

39. Hester Prynne wore one : SCARLET A
Hester Prynne is the main character in Nathaniel Hawthorne’s novel “The Scarlet Letter”. When Hester is convicted by her puritanical neighbors of the crime of adultery, she is forced to wear a scarlet “A” (for “adultery”) on her clothing for the rest of her life, hence the novel’s title, “The Scarlet Letter”.

44. Labor Day arrivals, e.g. : VIRGOS
The astrological sign of Virgo is associated with the constellation of the same name. The Virgo constellation is related to maidens (virgins), purity and fertility.

46. Conf. whose membership increased by two in 2011 : PAC-TEN
Pac-12 an abbreviation for the Pacific-12 Conference, a college athletic conference in the western US. The Pac-12 has won more NCAA National Team Championships than any other conference. The Pac-12 was founded in 1915 as the Pacific Coast Conference (PCC). Over time as it grew, the conference went by the names Big Five, Big Six, Pacific-8, Pacific-10 and became the Pacific-12 in 2011.

47. Melodic : ARIOSE
A tune that is “ariose” is song-like, characterized by melody as opposed to harmony.

53. Sticks in the brig? : MASTS
A brig, short for brigantine, is a type of ship. It was the use of brigantines as prison ships that led to use of “brig” as the word for a jail or prison cell on a seagoing vessel.

55. Utah senator who co-sponsored a tariff act : SMOOT
The Smoot-Hawley Tariff Act of 1930 was sponsored by Senator Reed Smoot and Representative Willis C. Hawley. The act raised tariffs on imported goods to record levels, the second highest in US history. The strategy appeared to work at first, protecting US jobs in the early days of the depression. But as many anticipated, tariffs were raised in retaliation by other countries and US exports plummeted. Many economists blame the 1930 Tariff Act for the depth of the Great Depression.

The American author Tom Wolfe started out his career as a journalist, and was very much at the center of the New Journalism literary movement of the sixties and seventies. His first book of note was “The Electric Kool-Aid Acid Test” that tells the story of Ken Kesey and his Merry Pranksters. Wolfe also wrote “The Right Stuff” about the post-war test pilots and the Project Mercury astronauts.