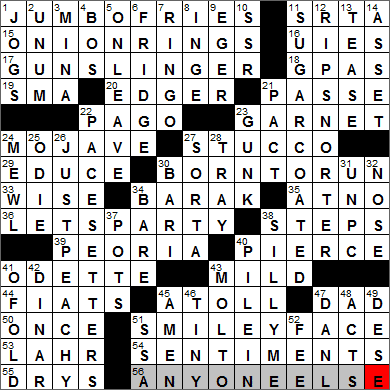 The Scottish Lowlands are that part of the country that is not classified as the Highlands. The Lowlands make up the south and east of Scotland.

22. Vino de ___ (Spanish wine designation) : PAGO
“Vino de Pago” is a classification of Spanish wine that has been in use since 2003. The term translates as “Vineyard Wine”, and is used by only the great wine growing estates in Spain. As of 2013, there are only 13 different Vino de Pagos.

23. Red shade : GARNET
Garnets are silicate minerals that comes in many colors. However, the color that we call “garnet” is a dark red.

24. Santa Ana wind source : MOJAVE
The Mojave Desert in the southwest is named for the Native American Mohave tribe. Famous locations within the boundaries of the desert, are Death Valley, Las Vegas, Nevada and the ghost town of Calico, California.

27. It may be up against the wall : STUCCO
Stucco is a decorative coating that is applied to walls and ceilings. “Stucco” is the Italian name for the material, and a word that we imported into English.

29. Bring out : EDUCE
“To educe” is to draw out, although the term can also have a similar meaning to deduce.

30. 1975 hit song about “tramps like us” : BORN TO RUN
“Born to Run” is a 1975 album released by Bruce Springsteen, the third of his career. “Born to Run” was to be Springsteen’s “breakout” album and really established him as popular artist.

33. Like Athena : WISE
The Greek goddess Athena is often associated with wisdom (among other attributes). In many representations. Athena is depicted with an owl sitting on her head. It is this linkage of the owl with the goddess of wisdom that led to today’s perception of the owl as being “wise”.

34. Sharon’s predecessor : BARAK
Ehud Barak served as Prime Minister of Israel from 1999 to 2001. Barak left office after he called a special election for Prime Minister and lost the vote to Ariel Sharon. Barak resigned from the Knesset and took an advisory job with the US company Electronic Data Systems (EDS), and did some security-related work with a private equity company. In 2007, Barak took over leadership of Israel’s Labor Party and is now the country’s Minister of Defense.

Ariel Sharon is a former Prime Minister of Israel. While still in office in 2005, Sharon suffered two debilitating strokes that left him in a permanent vegetative state from early 2006, a condition which persists to this day.

35. Fig. for I, O or U, but not A or E : AT NO
The atomic number of an element is also called the proton number, and is the number of protons found in the nucleus of each atom of the element.

Examples of elements in the Periodic Table are iodine (I), oxygen (O) and uranium (U).

36. It may be said while wearing a toga : LET’S PARTY
In Ancient Rome the classical attire known as a toga (plural “togae”) was usually worn over a tunic. The tunic was made from linen, and the toga itself was a piece of cloth about twenty feet long made from wool. The toga could only be worn by men, and only if those men were Roman citizens. The female equivalent of the toga was called a “stola”.

39. Phoenix suburb larger than the Midwest city it’s named for : PEORIA
Peoria is the oldest European settlement in the state of Illinois, having been settled by the French in 1680. The city is famous for being cited as “the average American city”. The phrase, “Will it play in Peoria?” is used to mean, “Will it appeal to the mainstream?” It is believed the expression originated as a corruption of, “We shall play in Peoria”, a line used by some actors in the 1890 novel “Five Hundred Dollars” by Horatio Alger, Jr.

The city of Peoria in Arizona is a suburb of Phoenix, and was named for the Illinois city of the same name. The Peoria name came about when the Arizona Canal Company hired former Army officer William John Murphy to build a 41 mile-long canal in the area. Murphy was from Peoria, Illinois and he recruited people from his hometown to settle the area when the canal was completed. There are now more people living in Peoria, Arizona than there are in Peoria, Illinois.

41. Princess of ballet : ODETTE
“Swan Lake” is such a delightfully light and enjoyable ballet by Pyotr Ilyich Tchaikovsky. “Swan Lake” tells the story of Odette, a princess turned into a swan by a sorcerer. The ballet also features Odile, Odette’s “evil twin”. Odile is disguised to look like Odette with the goal of tricking the prince to fall in love with her. In the ballet, the roles of Odette and Odile are played by the same ballerina.

45. Key ring? : ATOLL
An atoll is a coral island that is shaped in a ring and enclosing a lagoon. There is still some debate as to how an atoll forms, but a theory proposed by Charles Darwin while on his famous voyage aboard HMS Beagle still holds sway. Basically an atoll was once a volcanic island that had subsided and fallen into the sea. The coastline of the island is home to coral growth which persists even as the island continues to subside internal to the circling coral reef.

A “key” (also “cay”) is a low island offshore, as in the Florida Keys. Our term in English comes from the Spanish “cayo” meaning “shoal, reef”.

51. It’s not drawn due to gravity : SMILEY FACE
One wouldn’t draw a smiley face to represent gravity, solemnity.

53. Co-star in the U.S. premiere of “Waiting for Godot,” 1956 : LAHR
Bert Lahr’s most famous role was that of the cowardly lion in “The Wizard of Oz”. Lahr had a long career in burlesque, vaudeville and on Broadway. Lahr also starred in the first US production of Samuel Beckett’s play “Waiting for Godot”, alongside Tom Ewell.

4. A.L. East team, on sports tickers : BOS
The Boston Red Sox is one of the most successful Major League Baseball teams and so commands a large attendance, but only when on the road. The relatively small capacity of Boston’s Fenway Park, the team’s home since 1912, has dictated that every game the Red Sox has played there has been a sell out since May of 2003.

7. #1 spoken-word hit of 1964 : RINGO
“Ringo” was a song that topped the Easy Listening charts soon after it was released in 1964. The song was “sung” (actually spoken) by the actor Lorne Greene. Greene tells the story of a gunfighter named Ringo. Interestingly, the B-side of “Ringo” is the theme music from “Bonanza”, the TV show on which Lorne Greene starred. That version of the theme music came complete with lyrics that were never used on television.

Playwright William Inge had a run of success on Broadway in the early fifties. Inge’s most celebrated work of that time was the play “Picnic”, for which he was awarded a Pulitzer Prize. The original 1953 cast of “Picnic” included a young male actor making his debut on Broadway. His name was Paul Newman.

9. Castle of ___ (Hungarian tourist draw) : EGER
The Castle of Eger is located in the Hungarian city of Eger. The castle was instrumental in repelling Turkish forces during the Siege of Eger in 1552.

Eger is a city in the northeast of Hungary that is noted for its thermal baths and for its wine production. Back in Ireland, I used to drink a fair amount of “Bull’s Blood”, Hungary’s most famous red wine, which comes from the Eger wine region.

10. Old map abbr. : SSR
The former Soviet Union (USSR) was created in 1922, not long after the Russian Revolution of 1917 that overthrew the Tsar. Geographically, the new Soviet Union was roughly equivalent to the old Russian Empire, and was comprised of fifteen Soviet Socialist Republics (SSRs).

12. Dilly : RIPSNORTER
“Ripsnorter” is a slang term for a person or thing noted for strength or excellence, a “lulu”.

A “dilly” is something or someone that is excellent.

23. Engine buildup : GUNK
“Gunk” is a thick greasy substance. The original “Gunk” was a brand of thick liquid soap that was patented in 1932.

24. Sound like a baby : MEWL
To mewl is to cry weakly, like a baby, with the word being somewhat imitative.

26. Hunky-dory : JUST PEACHY
Surprisingly (to me), the term “hunky-dory” has been around a long time, and is documented back in the mid-1800s. No one is really sure of its origin, but some say it is an Anglicization of Honcho dori, that back in the day was a street of ill repute in Yokohama, Japan.

30. Port on the Adriatic : BARI
Bari is a major port city on the Adriatic coast of Italy. Bari has the unfortunate distinction of being the only city in Europe to experience chemical warfare during WWII. Allied stores of mustard gas were released during a German bombing raid on Bari in 1943. Fatalities caused by the chemical agent were reported as 69, although other reports list the number as maybe a thousand military personnel and a thousand civilians.

31. Like Bill Maher, notably : UN-PC
To be “un-PC” is to be politically incorrect.

Bill Maher is a stand-up comedian and political commentator. Maher has an HBO television show called “Real Time with Bill Maher” which is essentially a follow-on from the very successful “Politically Incorrect” that started out on Comedy Central.

42. Tunisian money : DINAR
The denarius (plural “denarii”) is a small silver coin that was used in Ancient Rome. Derived from the Latin “deni” meaning “containing ten”, a denarius had the value of ten asses. Today’s “dinar” is a common coin in the Arab world and is named for the old Roman coin. The dinar name was chosen in the days when Arabs were conquering large swathes of the old Roman Empire.

45. Devotional period? : AMEN
The word “amen” is translated as “so be it”. “Amen” is said to be of Hebrew origin, but it is likely to be also influenced by Aramaic and Arabic.

47. Twain’s “celebrated jumping frog” : DAN’L
“The Celebrated Jumping Frog of Calaveras County” is a short story by Mark Twain, first published in 1865. It was this publication that launched Twain’s career as a writer as it brought him national attention. The title character is a frog that’s given the name “Dan’l Webster”.