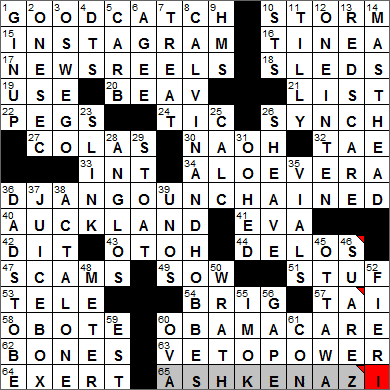 17. Things employed to show the passage of time à la “Citizen Kane” : NEWSREELS
A central plot line in the 1941 movie “Citizen Kane” is a newsreel reporter’s quest to find the meaning of the dying word spoken by the title character: “Rosebud”. Spoiler Alert … it is revealed at the end of the movie that “Rosebud” is the name of the sled used by Kane in his childhood, the only period in which he was really happy.

20. ’50s-’60s sitcom nickname : BEAV
Ward Cleaver and his wife June were the parents of Wally Cleaver and his younger brother “The Beaver”. The four family members appeared in the fifties sitcom “Leave It to Beaver”.

27. Brown refreshers : COLAS
The first cola drink to become a commercial success was Coca-Cola, soon after it was invented by a druggist in 1886. That first Coca-Cola was flavored mainly with kola nuts and vanilla. The formulation was based on an alcoholic drink called Coca Wine that had been on sale for over twenty years. The original alcoholic version actually contained a small concentration of cocaine.

34. So-called “potted physician” : ALOE VERA
Aloe vera has a number of alternate names that are descriptive of its efficacy as a medicine. These include the First Aid plant, Wand of Heaven, Silent Healer and Miracle Plant.

40. Home of Sky Tower, the tallest free-standing structure in the Southern Hemisphere : AUCKLAND
Auckland on the North Island of New Zealand is the most populous city in the country. Auckland is so large that it has two ports, one on the Tasman Sea to the west and one on the Pacific Ocean to the east.

Sky Tower in Auckland, New Zealand is the tallest free-standing structure in the Southern Hemisphere. The tower is part of a casino complex called SKYCITY Auckland that was originally built for Harrah’s Entertainment.

42. Morse bit : DIT
Dahs and dits are the sound equivalents of dashes and dots of Morse Code. Samuel Morse didn’t invent Morse code, but it took his name because it was created for use on the electric telegraph, which was invented by him.

43. Contrarian’s abbreviation : OTOH
“OTOH” is short for “on the other hand” in text-speak.

44. Island where Artemis was born : DELOS
Delos is a Greek island in the Cyclades archipelago. Delos played an important part in Greek mythology as the birthplace of Apollo and Artemis.

The Temple of Artemis, also known as the Temple of Diana, was a Greek temple located at Ephesus, now in modern Turkey. Artemis was a Greek goddess, the twin of Apollo, and she was depicted as a virginal huntress.

47. Phishing lures : SCAMS
Phishing is the name given to the online practice of stealing usernames, passwords and credit card details by creating a site that deceptively looks reliable and trustworthy. Phishers often send out safe-looking emails or instant messages that direct someone to an equally safe-looking website where the person might inadvertently enter sensitive information. “Phishing” is a variant of the word “fishing”, as in “fishing for passwords, PIN numbers etc.”

51. Double ___ Oreo : STUF
Double Stuf Oreo was introduced in 1975, and it has twice the normal amount of white cream filling as the original cookie.

54. Two-master : BRIG
A brig, short for brigantine, is a type of ship. It was the use of brigantines as prison ships that led to use of “brig” as the word for a jail or prison cell on a seagoing vessel.

58. Leader of Uganda’s independence movement : OBOTE
Milton Obote was the political leader who led Uganda to independence from British colonial rule in 1962. Oboto served as Prime Minister and then President of the country, until he was overthrown by Idi Amin in 1971.

60. Subject of a landmark 2012 Supreme Court decision : OBAMACARE
The correct name for what has been dubbed “Obamacare” is the “Patient Protection and Affordable Care Act”.

62. Dice : BONES
Dice were originally made from “knucklebones”, bones found in the ankles of a sheep. As a result, dice are often referred to as “bones”.

63. Final say : VETO POWER
“Veto” comes directly from Latin and means “I forbid”. The word was used by tribunes of Ancient Rome to indicate that they opposed measures passed by the Senate.

65. Like Albert Einstein, ethnically : ASHKENAZI
Ashkenazi Jews” are an ethnic division that originated in the Holy Roman Empire and who settled in eastern France, Germany and Eastern Europe. In the 11th century, Ashkenazis made up only three percent of the world’s Jewish population. Today, that number stands at over 70%. Ashkenaz is a figure in the Bible, the eldest son of Gomer and a descendent of Japheth, one of Noah’s three sons.

Down
1. Add zip to : GIN UP
“To gin up” is a slang term meaning “to enliven, excite”. The term probably derives from the older “to ginger up”. Gingering up was the rather nasty practice of putting ginger up inside a horse to make it lively and move with a high tail.

3. Port on Lake Ontario : OSWEGO
Oswego is a port city in New York State that lies on Lake Ontario. Oswego bills its as “The Port City of Central New York”.

4. Result of drying out, maybe : DTS
The episodes of delirium that can accompany withdrawal from alcohol are called Delirium Tremens (the DTs). The literal translation of this Latin phrase is “trembling madness”.

The excellent 1951 movie “The African Queen” is a screen adaptation of a novel with the same name by C. S. Forester. The stars of course were Katharine Hepburn and Humphrey Bogart, and the film won Bogie his only Oscar. Some scenes were shot on location in Uganda and the Congo, where conditions were far from ideal for making a film. Most of the cast fell ill at various times, although Bogart remained hale and hearty. He claimed that was because he stuck to his own supply of whiskey rather than drinking the local water!

9. Bounty letters : HMS
Charles Nordhoff and James Norman Hall wrote “Mutiny on the ‘Bounty'”, based on a true story about a mutiny on the ship HMS Bounty. They followed up their successful novel with two more works, creating what is now called the “Bounty Trilogy”. The three books are:

10. E, F and G in D.C. : STS
Famously, the layout of the streets in Washington was designed by French-born American architect Pierre Charles L’Enfant. The L’Enfant Plan called for a grid of east-west and north-south streets. This grid was criss-crossed with diagonal avenues. The avenues and streets met at circles and rectangular plazas. Later, the diagonal avenues were named for states of the union.

11. Jennifer of “Bound” : TILLY
Both Meg Tilly and her sister Jennifer are actresses. Meg has been unlucky in her career in some respects. She started out as a dancer, but had to give it up due to a serious accident. As an actress she was cast in the plum role of Constanze Mozart in “Amadeus”, but had to drop out from the role when she hurt her leg playing soccer with some local children during shooting of the film. Meg Tilly has given up acting, in favor of writing books.

“Bound” is a crime film released in 1996 starring Jennifer Tilly and Gina Gershon as two women who scheme together to steal money from the mob. I saw this film not too long ago, and it had some pretty steamy scenes.

13. Cause for some blacklisting : RED SCARE
After WWII the United States went through what was called the “Second Red Scare”, the fear of communist infiltration in American society and government. Senator Joseph McCarthy became a lightning rod for this movement when he chaired Senate hearings in the fifties designed to root out communist infiltrators.

25. Class graded on a curve? : CALC
The Latin word “calculus” was originally used for a reckoning or an account, and originally applied to a pebble that was used to maintain a count. The Latin word came from the Greek for a pebble, “khalix”.

26. Gather at harvest : SHEAVE
To sheave is to collect into a sheaf, a bundle.

29. Brown coat : STOAT
Ermine is another name for the stoat. The stoat has dark brown fur in the summer, and white fur in the winter. Sometimes the term “ermine” is reserved for the animal during the winter when the fur is white. Ermine skins have long been prized by royalty and are often used for white trim on ceremonial robes.

36. Some Lamaze assistants : DADS-TO-BE
The Lamaze technique for childbirth was developed by a French obstetrician called Fernand Lamaze. He introduced the technique in the west after observing similar practices in the Soviet Union in a visit there in 1951.

39. Some, in Salamanca : UNOS
Salamanca is a city and province in the commune of Castile and León in northwestern Spain. The University of Salamanca is the oldest university in the country, having been founded in 1218.

45. Parliamentary home : OTTAWA
Ottawa is the second largest city in the Province of Ontario (after Toronto) and is the capital city of Canada. The name “Ottawa” comes from an Algonquin word “adawe” which means “to trade”.

46. Newsman Ray : SUAREZ
Ray Suarez is a broadcast journalist who worked for many years with the PBS television network, as well NPR radio. Suarez now hosts the program called “Inside Story” on Al Jazeera America.

48. What stress may be good for : METER
The meter of a poem is the arrangement of words to produce a particular rhythm.

50. “Roasted in ___ and fire”: Hamlet : WRATH
“Hamlet” is William Shakespeare’s longest play, and was also one of most popular of the playwright’s works during his own lifetime.

52. Guy with a cooking show : FIERI
Guy Fieri is a restaurant owner and television personality. Fieri is known as “the face of the Food Network” as his television series on that channel is very popular.

61. Bilk : CON
The word “bilk”, meaning “to defraud”, comes from the card game of cribbage.