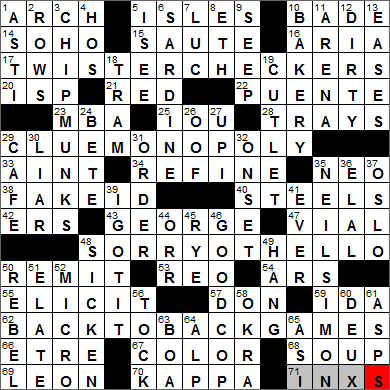 17A. Tornado monitors? : TWISTER CHECKERS
29A. What the only detective on a case has? : CLUE MONOPOLY
48A. What a remorseful Iago might have said? : SORRY, OTHELLO

Today’s Wiki-est, Amazonian Googlies
Across
1. Keystone place : ARCH
The keystone of an arch is the last piece put in position, the placement of which allows the arch to bear weight. The keystone sits right at the apex.

14. Carnaby Street’s locale : SOHO
Carnaby Street is in Soho in London, and is a famous for its fashion boutiques. Carnaby Street gained a reputation for leading the mod and hippie styles of dress in the late fifties and sixties. Mary Quant, who introduced the world to the miniskirt, had her boutique in Carnaby Street, and bands like the Rolling Stones and the Who worked and socialized in the area in the Swinging Sixties.

15. Brown, in a way : SAUTE
“Sauté” is of course a French word. The literal translation from the French is “jumped” or “bounced”, a reference to the tossing of food while cooking it in a frying pan.

16. Gershwin’s “Summertime” is one : ARIA
“Porgy and Bess” is an opera with music by George Gershwin, lyrics by Ira Gershwin, and libretto by DuBose Heyward. The storyline of the opera is based on the novel “Porgy” written by DuBose Heyward and and wife Dorothy. “Porgy and Bess” was first performed in 1935, in New York City, but really wasn’t accepted as legitimate opera until 1976 after a landmark production by the Houston Grand Opera. The most famous song from the piece is probably the wonderful aria “Summertime”.

17. Tornado monitors? : TWISTER CHECKERS
Eva Gabor was the youngest of the Gabor sisters, all three of whom were celebrated Hollywood actresses and socialites (her siblings were Zsa-Zsa and Magda). The Gabor sisters were born in Budapest and immigrated to the United States separately, with Eva being the first to arrive. Eva broke into movies, but her most famous role was on the TV sitcom “Green Acres” in which she played the lovely character Lisa Douglas opposite Eddie Albert. One of Eva’s claims to fame is the unwitting promotion of the game called “Twister”, the sales of which were languishing in 1996. In an appearance on “The Tonight Show” she got on all fours and played the game with Johnny Carson. Sales took off immediately, and Twister became a huge hit.

“Checkers” is yet another word that I had to learn moving across the Atlantic. In Ireland the game is called draughts.

21. Like Mao’s “little” book : RED
During China’s Cultural Revolution, the Communist Party published a book of statements and writings from Chairman Mao Zedong. Here in the West the publication is usually referred to as “The Little Red Book”.

22. Tito, the King of Latin Music : PUENTE
After serving in the navy in WWII for three years, the musician Tito Puente studied at Juilliard, where he got a great grounding in conducting, orchestration and theory. Puente parlayed this education into a career in Latin Jazz and Mambo. He was known as “El Rey” as well as “The King of Latin Music”.

29. What the only detective on a case has? : CLUE MONOPOLY
Clue is another board game that we knew under a different name growing up in Ireland. Outside of North America, Clue is marketed as “Cluedo”. Cluedo was the original name of the game, introduced in 1949 by the famous British board game manufacturer Waddingtons. There are cute differences between the US and UK versions. For example, the man who is murdered is called Dr. Black (Mr. Boddy in the US), one of the suspects is the Reverend Green (Mr. Green in the US), and the suspect weapons include a dagger (a knife in the US), a lead pipe (lead piping in the US) and a spanner (a wrench in the US). I think it’s a fabulous game, a must during the holidays …

There are eight tokens included in the game of Monopoly as of 2013. These are the wheelbarrow, battleship, racecar, thimble, boot, Scottie dog, top hat and cat. The latest to be introduced was the cat in 2013, replacing the iron. The battleship and the cannon (aka howitzer, now retired) had been added to the Monopoly game as part of a recycling exercise. The pieces were intended for the game “Conflict” released in 1940, but when Parker Bros. pulled “Conflict” off the market due to poor sales, they added their excess battleships and cannons to Monopoly.

48. What a remorseful Iago might have said? : SORRY, OTHELLO
Iago is the schemer in Shakespeare’s “Othello”. Iago is a soldier who fought alongside Othello and feels hard done by, missing out on promotion. He hatches a plot designed to discredit his rival Cassio by insinuating that Cassio is having an affair with Desdemona, Othello’s wife. By the end of the play it’s Iago himself who is discredited and Othello (before committing suicide) apologizes to Cassio for having believed Iago’s lies. Heavy stuff …

53. Classic car whose name is a monogram : REO
The REO Motor Company was founded by Ransom E. Olds (hence the name REO). The company made cars, trucks and buses, and was in business from 1905 to 1975 in Lansing, Michigan. Among the company’s most famous models were the REO Royale and the REO Flying Cloud.

59. Wash. neighbor : IDA
Idaho has the nickname the Gem State, mainly because almost every known type of gemstone has been found there.

68. Primordial ___ : SOUP
“Primordial soup” is an expression that was coined in 1924 to describe a liquid that is rich in the compounds necessary, and in the conditions that are necessary, for the emergence and growth of the first life forms.

69. Spanish province or its capital : LEON
León is a province in the autonomous community of Castile and León in the northwest of Spain. The province’s capital is the city of León, which was founded as Roman military encampment around 29 BC.

70. Fraternity letter : KAPPA
Kappa is the 10th letter of the Greek alphabet, the equivalent of our letter K.

71. Band with the 1987 hit “Need You Tonight” : INXS
INXS (pronounced “in excess”) was a rock band from Australia. The band formed in 1977 in Sydney as the Farriss Brothers, as three of the original lineups were indeed brothers.

Down
1. Sparkling Italian export : ASTI
Asti is a sparkling white wine from the Piedmont region of Italy, and is named for the town of Asti around which the wine is produced. The wine used to be called Asti Spumante, and it had a very bad reputation as a “poor man’s champagne”. The “Spumante” was dropped in a marketing attempt at rebranding associated with a reduction in the amount of residual sugar in the wine.

2. Toils on a trireme : ROWS
Triremes were galleys used in the Mediterranean by a number of cultures, including the Ancient Greeks and Romans. The trireme was so called because there were three rows of oars on each side of the vessel. The term “trireme” comes from the Latin “tres remi” meaning “three-oar”. There was also a less ambitious version of the trireme that had only two banks of oars, and that was known as a bireme.

3. High-pitched group with a 1958 #1 hit, with “the” : CHIPMUNKS
Alvin and the Chipmunks is a cartoon musical group that was created for the recording of a novelty song in 1958 called “The Chipmunk Song (Christmas Don’t Be Late)”. The three Chipmunks (Alvin, Simon and Theodore) were all voiced by singer Ross Bagdasarian, Sr. but with a speedy playback to create high-pitched voices.

4. Yuletide interjections : HOS
“Yule” celebrations coincide with Christmas, and the words “Christmas” and “Yule” have become synonymous in much of the world. However, Yule was originally a pagan festival celebrated by Germanic peoples. The name “Yule” comes from the Old Norse word “jol” that was used to describe the festival.

18. Disneyland vehicle : TRAM
Walt Disney came up with the idea of building Disneyland after visiting other theme parks with his daughters in the thirties and forties. He started building the park at Anaheim, California in 1954, and the facility opened just one year and one day later. The total cost of construction was $17 million. Opening day did not go smoothly, largely because over 28,000 people visited the park compared to the 11,000 people expected at the invitation-only event. The opening day went so badly that for years Disney executives referred to it as “Black Sunday”.

24. ___ noire : BETE
“Bête noire” translates from French as “the black beast” and is used in English for something or someone that is disliked.

27. Reuters alternative : UPI
Founded in 1958, United Press International (UPI) was one of the biggest news agencies in the world, sending out news by wire to the major newspapers. UPI ran into trouble with the change in media formats at the end of the twentieth century and lost many of its clients as the afternoon newspapers shut down due to the advent of television news. UPI, which once employed thousands, still exists today but with just a handful of employees.

36. Airline that doesn’t fly on the Sabbath : EL AL
El Al Israel Airlines is the flag carrier of Israel. The term “el al” translates from Hebrew as “to the skies”.

37. Kon-Tiki Museum city : OSLO
The Kon-Tiki was a raft used by Thor Heyerdahl in 1947 to cross the Pacific Ocean from South America to the Polynesian islands. The original raft used in the voyage is on display in the Kon-Tiki Museum in Oslo, Norway (Heyerdahl was a native of Norway).

41. In perpetuum : EVER
“In perpetuum” is a Latin phrase meaning “for ever, in perpetuity”.

44. Legendary Boston Garden skater : ORR
Bobby Orr is regarded as one of the greatest hockey players of all time. By the time he retired in 1978 he had undergone over a dozen knee surgeries. At 31 years of age, he concluded that he just couldn’t skate anymore. Reportedly, he was even having trouble walking …

45. Part of a Reuben : RYE
There are conflicting stories about the origin of the Reuben sandwich. One is that it was invented around 1914 by Arnold Reuben, an immigrant from Germany who owned Reuben’s Deli in New York.

58. Gumbo need : OKRA
Gumbo is a type of stew or soup that originated in Louisiana. The primary ingredient can be meat or fish, but to be true gumbo it must include the “holy trinity” of vegetables, namely celery, bell peppers and onion. Okra used to be a requirement but this is no longer the case. Okra gave the dish its name as the vernacular word for the African vegetable is “okingumbo”, from the Bantu language spoken by many of the slaves brought to America.

61. Deadly snakes : ASPS
The asp is a venomous snake found in the Nile region of Africa. It is so venomous that the asp was used in ancient Egypt and Greece as a means of execution. Cleopatra observed such executions noting that the venom brought on sleepiness without any painful spasms. When the great queen opted to commit suicide, the asp was therefore her chosen method.

63. Deadly snake : BOA
Boa constrictors are members of the Boidae family of snakes, all of which are non-venomous. Interestingly, the female boa is always larger than the male.