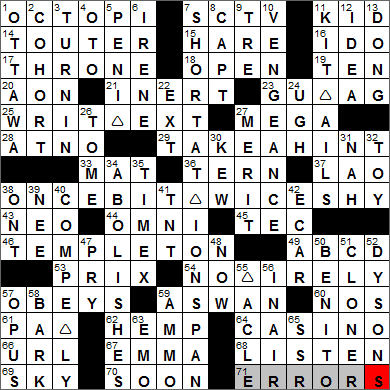 CROSSWORD SETTER: Paul Hunsberger
THEME: Tenting … we have a rebus puzzle today, so the word letters TENT go together in several squares in the grid. I’ve marked the TENT squares with a tent-like triangle:

23A. German greeting : GUTEN TAG
25A. Transcription, e.g. : WRITTEN TEXT
38A. Adage regarding skittishness : ONCE BITTEN TWICE SHY
54A. A little less than 100% : NOT ENTIRELY
61A. Inventor’s award : PATENT
5D. Atoner : PENITENT
7D. What a constant channel-surfer may have : SHORT ATTENTION SPAN
11D. Plant with fluffy flower spikes : KITTENTAILS
40D. With skill : COMPETENTLY
55D. Arm of the sea? : TENTACLE

Today’s Wiki-est, Amazonian Googlies
Across
1. Highly intelligent invertebrates : OCTOPI
The name “octopus” comes from the Greek for “eight-footed”. The most common plural used is “octopuses”, although the Greek plural form “octopodes” is also quite correct. The plural “octopi” isn’t really correct as the inference is that “octopus” is like a second-declension Latin noun, which it isn’t. That said, dictionaries are now citing “octopi” as an acceptable plural.

19. Second-highest pinochle card : TEN
Pinochle is a card game that was developed from the 19th-century French game called bezique.

27. ___ Millions (multistate lottery) : MEGA
The Mega Millions lottery game is available in most states of the US, as is its major rival called Powerball.

28. 47, for Ag : AT NO
The atomic number of an element is also called the proton number, and is the number of protons found in the nucleus of each atom of the element.

36. Arctic ___ (migrating bird) : TERN
Terns are seabirds that are found all over the world. The Arctic Tern makes a very long-distance migration. One Arctic Tern that was tagged as a chick in Great Britain in the summer of 1982, was spotted in Melbourne, Australia just three months later. The bird had traveled over 14,000 miles in over those three months, an average of about 150 miles a day. Remarkable …

37. Vientiane native : LAO
Vientiane is the capital city of Laos, situated on the famous Mekong River. The city was originally called the “city of sandalwood” by Buddhist monks, naming after the valued trees that grew in the area. The French took the Pali words for “city of sandalwood” and rewrote it as the French-sounding “Vientiane”.

43. Prefix with cortex : NEO-
The neocortex is part of the brain, the part of the cerebral cortex that is especially large in higher animals.

44. Luxury hotel name : OMNI
Omni Hotels & Resorts is headquartered in Irvine, California and has properties in the US, Canada and Mexico.

46. “Charlotte’s Web” rat : TEMPLETON
“Charlotte’s Web” is a children’s novel by author E. B. White. Charlotte is a barn spider, who manages to save the life of a pig named Wilbur. Wilbur is a pet pig, owned by the farmer’s daughter, Fern Arable. The story also includes a gluttonous rat called Templeton who provides some light and comical moments.

53. ___ fixe : PRIX
On a restaurant menu, items that are “à la carte” are priced and ordered separately. A menu marked “table d’hôte” (also called “prix fixe”) is a fixed-price menu with limited choice.

59. Egyptian dam site : ASWAN
From ancient times right up to 1970, the annual flooding of the Nile was a significant event in Egypt. The flooding allowed the deposition of fertile silt far beyond the banks of the river, helping the region’s agriculture. However, the flooding was unpredictable. So the Aswan Dam was built in the sixties and from 1970 the flooding was brought under control.

62. Fiber-yielding plant : HEMP
Hemp is a hardy, fast-growing plant that has many uses mainly due to the strength of the fibers in the plant’s stalks. Hemp is used to make rope, paper and textiles. There is of course a variety of hemp that is grown to make drugs, most famously cannabis.

64. Croupier’s workplace : CASINO
The term “casino” originated in the 1700s, when it described a public room for music or dancing. The name “casino” is a diminutive of “casa” meaning “house”. The term started to be used for an aristocratic gambling house in the early 1800s.

“Etail” is the term used these days for online shopping. Etail is often compared to regular shopping in the “real world” by juxtaposing it with a “brick and mortar” store.

67. Watson who played Hermione Granger : EMMA
Emma Watson is the English actress famous for playing Hermione Granger in the “Harry Potter” series of movies. Watson continued her education while pursuing her acting career and studied at Brown University in Providence, Rhode Island.

69. “That inverted Bowl,” per Edward FitzGerald : SKY
Omar Khayyam was a Persian with many talents. He was a poet as well as an important mathematician, astronomer and physician. A selection of his poems were translated by one Edward Fitzgerald in a collection called “Rubaiyat of Omar Khayyam”. Here are some lines from “Rubaiyat” …

And that inverted Bowl we call The Sky,
Whereunder crawling coop’t we live and die,
Lift not thy hands to It for help–for it
Rolls impotently on as Thou or I.

Down
1. Home of the Senators : OTTAWA
The Senators are the NHL hockey team in Ottawa, Canada. The current team, founded in the 1992-93 season, is the second NHL team in the city to use the name “Senators”. The original team was founded in 1917 and had a very successful run until the league expanded into the US in the late twenties. The cost of operating in what became the smallest NHL city eventually drove the Senators to St. Louis where they played for a year as the Eagles before finally folding.

6. Memorable hurricane of 2011 : IRENE
Hurricane Irene caused extensive flooding in 2011 as it travelled through the Caribbean, up the East Coast of the United States and into the Atlantic seaboard of Canada. The hurricane was unusual in that it came so far up north. Fifty-five deaths were attributed to Irene.

10. “Ben-Hur” theme : VENGEANCE
The celebrated Charlton Heston movie “Ben-Hur” is a dramatization of a book published in 1880 by Lew Wallace titled “Ben-Hur: A Tale of Christ”. The 1959 epic film won a record 11 Academy Awards, a feat that has been equaled since then but has never been beaten. The other winners of 11 Oscars are “Titanic” and “The Lord of the Rings: The Return of the Rings”.

26. Heavy reading? : TOME
“Tome” first came into English from the Latin “tomus” which means “section of a book”. The original usage in English was for a single volume in a multi-volume work. By the late 16th century “tome” had come to mean “a large book”.

30. London’s ___ Gardens : KEW
Kew Gardens is a beautiful location in southwest London that was formerly known as the Royal Botanic Gardens. Kew Gardens has the world’s largest collection of living plants.

32. Buzz Lightyear, for one : TOY
1995’s “Toy Story” was the world’s first feature-length computer-animated movie. “Toy Story” was also the studio Pixar’s first production. The main roles in the film are Woody and Buzz, voiced by Tom Hanks and Tim Allen respectively. Hanks was the first choice to voice Woody, Allen was asked to voice Buzz after Billy Crystal turned down the role.

35. “Takes a licking …” brand : TIMEX
The Timex Group, the manufacturer of watches, evolved from the Waterbury Clock Company that was founded in 1854 in Waterbury, Connecticut. The company achieved tremendous success in the early sixties largely due to an innovative marketing campaign. Advertisements featured the memorable tagline “Timex – Takes a licking and keeps on ticking”. In 1962, one out of every three watches sold in the US was a Timex.

38. Prov. on Hudson Bay : ONT
Hudson Bay in northern Canada is the second largest bay in the world, after the Bay of Bengal. Hudson Bay was named by English explorers after Henry Hudson who explored the area in 1610 on his ship “Discovery”. Hudson’s crew mutinied during that voyage and set Hudson and his officers adrift in a small boat. It is presumed that the castaways didn’t survive for very long.

41. Block buster? : TNT
TNT is an abbreviation for trinitrotoluene. Trinitrotoluene was first produced in 1863 by the German chemist Joseph Wilbrand, who developed it for use as a yellow dye. TNT is relatively difficult to detonate so it was on the market as a dye for some years before its more explosive properties were discovered.

50. Mexican hero Juárez : BENITO
Benito Juárez served five times as President of Mexico, taking office for the first time in 1858, and leaving office for the last time in 1872. A number of locations across the country, and beyond, have been named in his honor, including the city of Ciudad Juárez that sits just across the US-Mexico border from El Paso.

52. Some vacuum cleaners : DYSONS
Dyson vacuum cleaners do not use a bag to collect dust. James Dyson invented the first vacuum cleaner to use cyclonic separation in 1979, frustrated at the poor performance of his regular vacuum cleaner. As Dyson cleaners do not use bags, they don’t have to deal with collection bags that are blocked with fine dust particles, even after emptying. Cyclonic separation uses high speed spinning of the dust-containing air so that the dust particles are thrown out of the airflow into a collection bin. We have a Dyson, and should have bought it years ago …

And the rocket’s red glare, the bombs bursting in air,
Gave proof through the night that our flag was still there

are lines from “The Star-Spangled Banner”.

63. Punk rock subgenre : EMO
The musical genre of “emo” originated in Washington D.C. in the 80s, and takes its name from “emotional hardcore”. Not my cup of tea …

65. Belarus, until 1991: Abbr. : SSR
The Republic of Belarus is a landlocked country in Eastern Europe, located east of Poland and north of Ukraine. Belarus didn’t exist as an entity until the Russian Revolution when it was created as one of the Soviet Socialist Republics (SSRs) that made up the USSR. The Republic of Belarus was formed soon after the USSR dissolved in 1990, but unlike many of the former Soviet Republics, Belarus has largely retained the old Soviet policies. Alexander Lukashenko is the country’s president and he believes in state ownership of the economy. Belarus and Russia have formal agreements in place that pledge cooperation.