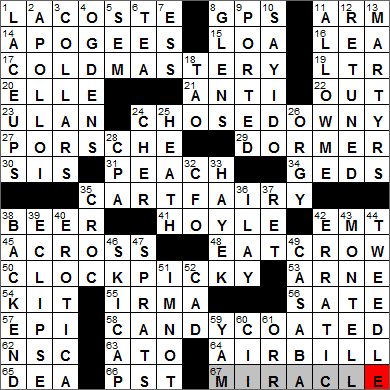 Today’s Wiki-est, Amazonian Googlies
Across
1. Sports star who lent his name to a clothing line : LACOSTE
René Lacoste was a French tennis player known for being very tenacious on court. This tenacity earned him the nickname “the Crocodile”. When he went into the clothing business, specializing in tennis apparel, his Lacoste brand became famous for its green crocodile logo.

14. Culminations : APOGEES
In the celestial world, an apsis is a point in an orbit when the orbiting body is at its greatest, or least, distance from it’s center of orbit. The farthest and closest points of orbit are known as the apogee and perigee, when talking about bodies orbiting the Earth. The farthest and closest points for bodies orbiting the sun are known as the aphelion and perihelion.

15. Mauna ___ : LOA
Mauna Loa on the “big island” of Hawaii is the largest volcano on the planet (in terms of volume). The name “Mauna Loa” is Hawaiian for “Long Mountain”.

16. Bucolic setting : LEA
The word “bucolic”, meaning rustic or rural, comes to us from the Greek word “boukolos” meaning “cowherd”.

19. Copier page size: Abbr. : LTR
Like so many things it seems, our paper sizes here in North America don’t conform with the standards in the rest of the world. ISO standard sizes used elsewhere have some logic behind them in that the ratio of width to length is usually one to the square root of two. This mathematical relationship means that when you cut a piece of paper in two each half preserves the aspect ratio of the original, which can be useful in making reduced or enlarged copies of documents. Our standard size of “letter” (8.5 x 11 inches) was determined in 1980 by the Reagan administration to be the official paper size for the US government. Prior to this, the “legal” size (8.5 x 14 inches) had been the standard, since 1921.

23. ___ Bator : ULAN
The name “Ulan Bator” translates from Mongolian as “the Red Hero”, and is Mongolia’s capital city. The “Red Hero” name was chosen in honor of the country’s national hero, Damdin Sükhbaatar. Sükhbaatar fought alongside the Soviet Red Army in the fight for liberation from Chinese occupation.

27. 911 maker : PORSCHE
Porsche was founded in 1931 in Stuttgart, Germany by Professor Ferdinand Porsche. The company didn’t produce cars at first, but worked on design and development. The first big job awarded to the company was from the German government, to design a car for the people. The result was the Volkswagen Beetle. Yep, the Beetle is a Porsche design.

29. Roof window : DORMER
A “dormer window” is a window in a dormer! A dormer is a roofed structure that protrudes from the slope of the main roof, and not the window itself.

34. Tests that consist of five subjects, for short : GEDS
The General Educational Development (GED) tests are a battery of five tests designed to demonstartate that a student has the academic skills of someone who has graduated from an American or Canadian high school.

41. Posthumous inductee into the Poker Hall of Fame, 1979 : HOYLE
Edmond Hoyle was a writer, most famous for documenting the rules and play of card games. In particular, Hoyle first wrote a book on the game of whist that was very popular. Such was the success of Hoyle’s treatises that we use the phrase “according to Hoyle” to mean “according to some respected authority”. When the Poker Hall of Fame was founded in 1979, Edmund Hoyle was one of the first inductees, even though the game of power was invented after he died.

48. Lose face : EAT CROW
The phrase “eat crow”, an alternative to “eat humble pie” perhaps refers to the fact that cooked crow may be edible, but is not a great food choice.

53. English composer Thomas : ARNE
Thomas Arne was an English composer from London. Arne wrote some iconic compositions including “Rule, Britannia!” He also wrote a version of “God Save the King” that became the British national anthem.

58. Like M&M’s … or four words to describe 17-, 24-, 35- and 50-Across? : CANDY COATED (or “C and Y coated”)
Forrest Mars, Sr. was the founder of the Mars Company. Forrest invented the Mars Bar while living over in England and then developed M&M’s when he returned to the US. Mars came up with the idea for M&M’s when he saw soldiers in the Spanish Civil War eating chocolate pellets. Those pellets had a hard shell of tempered chocolate on the outside to prevent them from melting. Mars got some of the funding to develop the M&M from William Murrie, the son of the president of Hershey’s Chocolate. It is the “M” and “M” from “Mars” and “Murrie” that give the name to the candy.

62. Grp. advising the president : NSC
The National Security Council (NSC) was created by President Harry S. Truman in 1947. The NSC is chaired by the sitting president and meets in the White House Situation Room.

63. “From ___ Zinc” (vitamin slogan) : A TO
The vitamin brand called Centrum uses the slogan “Complete from A to Zinc”.

64. FedEx form : AIRBILL
FedEx began operations in 1973 as Federal Express, but now operates very successfully under it’s more catchy abbreviated name. Headquartered in Memphis with its “SuperHub” at Memphis International Airport, FedEx is the world’s largest airline in terms of tons of freight flown. And due to the presence of FedEx, Memphis Airport has the largest-volume cargo operation of any airport worldwide.

67. Basis of the Hanukkah story : MIRACLE
The term “Hanukkah” derives from the Hebrew for “to dedicate”. Hanukkah is a holiday lasting eight days that commemorates the rededication of the Holy Temple of Jerusalem after successful Jewish revolt against the Seleucids in the 2nd-century BCE. The story of Hanukkah includes the miracle of the one-day supply of oil actually kept the menorah alight for eight days.

Down
2. Ill-fated mission of 1967 : APOLLO I
Apollo 1 was planned to be the first manned mission in NASA’s lunar landing program. Sadly, the three crew members perished in a tragic cabin fire that took place in a launch pad test. The astronauts who died were Gus Grissom (the second American to fly in space), Edward White (the first American to walk in space) and Roger Chaffee (the pilot for the planned Apollo 1 mission).

5. You might get credit for this period of work: Abbr. : SEM
“Semester” is a German word from the Latin “semestris”, an adjective meaning “of six months”. We of course use “semester” in a system that divides an academic year into two roughly equal parts. A trimester system has three parts, and a quarter system has four.

6. ___ rose : TEA
The first tea roses were so called because they had a fragrance reminiscent of Chinese black tea.

7. Series opener? : ESS
The letter S (ess) is the first letter in the word “series”.

9. Modified, as software for a different platform : PORTED
In the software world, “porting” is the process of adapting a computer program designed for one environment so that it works in another.

12. Like pianos, periodically : RETUNED
What was remarkable about the piano when it was invented, compared to other keyboard instruments, was that notes could be played with varying degrees of loudness. This is accomplished by pressing the keys lightly or firmly. Because of this quality, the new instrument was called a “pianoforte”, with “piano” and “forte” meaning “soft” and “loud” in Italian. We tend to shorten the name these days to just “piano”.

18. Way of the East : TAO
The Chinese character “tao” translates as “path”, but the concept of Tao signifies the true nature of the world.

24. Lead role in “Clueless” : CHER
Cher’s real name is Cherilyn Sarkisian, born in 1946. In her acting career, Cher was nominated for the Best Supporting Actress Oscar of 1984 for her performance in “Silkwood”. She went further in 1998 and won the Best Actress Oscar for playing Loretta Castorini in “Moonstruck”.

The 1995 movie “Clueless” is apparently based on Jane Austen’s “Emma”, which is a favorite novel of mine. As a result, I am going to have to check out the film. That said, “Clueless” is set at a Beverly Hills high school, so I probably should prepare myself to be disappointed …

25. Toffee bar brand : HEATH
The Heath candy bar is the invention of brothers Bayard and Everett Heath in the 1920s.

33. Salma of “Frida” : HAYEK
Salma Hayek is a Mexican actress. Hayek was the first Mexican national to be nominated for a Best Actress Oscar, for her portrayal of painter Frida Kahlo in the 2002 movie “Frida”.

36. Bedtime prayer words after “Now” : I LAY
One of the prayers that I was taught as a child goes:

38. Caboose : BACK-END
The word “caboose” originally came from Middle Dutch and was the word for a ship’s galley. When the last car in a train in North America was given a stove for the comfort of the crew, it took on the name “caboose”.

43. R&B singer Jordan : MONTELL
Montell Jordan is an R&B singer-songwriter from LA. Jordan left the music business in 2010 to become a Worship Minister for the Victory World Church in Norcross, Georgia.

44. Entice with music : TWEEDLE
“To tweedle” is to coax, allure. Originally “to tweedle” meant “to sing, whistle”, so today the term can often mean “to coax with music”.

46. Winter Olympics wear : SKI CAP
The first Winter Olympic Games was held in 1924, in Chamonix, France. The Winter and Summer Games were held in the same year until 1992, after which they were staggered so that we have an Olympic Games every two years.

47. Nursery rhyme couple : SPRATS
Jack Sprat was a nickname given in the 16th century to people of small stature. Jack featured in a proverb of the day:

49. Certain melon : CASABA
A casaba is type of honeydew melon. The casaba takes its name from the Turkish city of Kasaba, from where the fruit was imported into America in the late 1800s.

51. “___ Rappaport” (1986 Tony winner for Best Play) : I’M NOT
“I’m Not Rappaport” is a 1996 movie centered on two aging men played by Walter Matthau and Ossie Davis. The phrase “I’m not Rappaport” comes from an old vaudeville routine that the pair run through during the film.

61. Hockey’s Bobby : ORR
Bobby Orr is regarded as one of the greatest hockey players of all time. By the time he retired in 1978 he had undergone over a dozen knee surgeries. At 31 years of age, he concluded that he just couldn’t skate anymore. Reportedly, he was even having trouble walking …