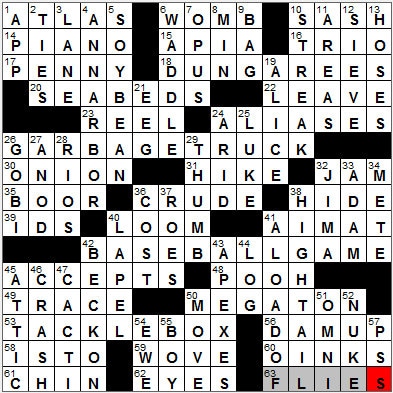 CROSSWORD SETTER: Dave Sarpola
THEME: FLIES … each of the theme answers is something that contains FLIES:

18A. Casual pants : DUNGAREES
26A. Vehicle with a compactor : GARBAGE TRUCK
42A. Where one might witness a hit and run? : BASEBALL GAME
53A. Fishing gear holder : TACKLE BOX

Today’s Wiki-est, Amazonian Googlies
Across
1. Rand McNally publication : ATLAS
Rand McNally is a company long associated with the city of Chicago. Its roots go back to 1856 when William Rand opened a printing shop in the city. Two years later he hired an Irish immigrant called Andrew McNally and the pair turned to printing tickets and timetables for the railroad industry. They diversified into “railroad guides” in 1870, a precursor of what was to be their big success, the road atlas. When automobile travel started to become significant, Rand and McNally turned their attention to roads and they published their first road map, of New York City in 1904. Rand and McNally really popularized the use of highway numbers, and indeed erected many roadside highway signs themselves, long before the state and federal authorities adopted the idea.

10. What says “Miss America” on Miss America : SASH
The Miss America Pageant started out as a beauty contest in 1921. The event was held in Atlantic City, New Jersey and was an attempt to retain tourists following the Labor Day weekend.

14. “Grand” instrument : PIANO
What was remarkable about the piano when it was invented, compared to other keyboard instruments, was that notes could be played with varying degrees of loudness. This is accomplished by pressing the keys lightly or firmly. Because of this quality, the new instrument was called a “pianoforte”, with “piano” and “forte” meaning “soft” and “loud” in Italian. We tend to shorten the name these days to just “piano”.

15. Samoan capital : APIA
Apia is the capital city, in fact the only city, of the Pacific island-nation of Samoa. The harbor of Apia is famous for a very foolish incident in 1889 involving seven ships from Germany, the US and Britain. A typhoon was approaching so the safest thing to do was to head for open water away from land, but no nation would move its ships for fear of losing face in front of the others. Six of the vessels were lost in the typhoon as a result and 200 American and German sailors perished. The British cruiser HMS Calliope barely managed to escape from the harbor and rode out the storm safely.

18. Casual pants : DUNGAREES
“Dungarees” is an alternative name for overalls. “Dungaree” was a cheap and poorly woven fabric used by the lower classes .Dungaree originated in a locale called “Dongari Killa” in Bombay, India, hence the name.

24. Names like Billy the Kid : ALIASES
I’m guessing that Billy the Kid was of Irish stock as his family name was McCarty. Another indication of an Irish connection is that he also used the aliases, William Antrim, Henry Antrim, and Kid Antrim. “Antrim” is one of the six counties of Northern Ireland.

39. Items checked by T.S.A. agents : IDS
The Transportation Security Administration (TSA) was of course created in 2001, soon after the 9/11 attacks.

50. Atomic bomb unit : MEGATON
The energy of an explosion can be measured using the TNT equivalent method. A one-megaton explosion is the amount of energy released in exploding one million metric tons of TNT.

61. Spot for a goatee : CHIN
A goatee is a beard formed just by the hair on a man’s chin. The name probably comes from the tuft of hair seen on an adult goat.

Down
4. University of Michigan’s home : ANN ARBOR
Ann Arbor, Michigan was founded in 1824 by John Allen and Elisha Rumsey. Supposed they used the name “Annarbour” in recognition of stands of bur oak that were on the land they had purchased (“arbor”), and in recognition of their wives, both of whom were called “Ann”.

7. Magnum ___ : OPUS
“Magnum opus” is a Latin term meaning “great work”. The magnum opus of a writer or composer perhaps, is his or her greatest work.

19. Wonderland girl : ALICE
Lewis Carroll wrote “Alice’s Adventures in Wonderland” in 1865, and the sequel called “Through the Looking-Glass, and What Alice Found There” in 1871. Because in the second adventure Alice went through a looking glass, the themes were deliberately chosen to be mirror images of the themes in “Wonderland”. Whereas “Wonderland” begins indoors, is set in summer, and uses playing card imagery, “Looking Glass” begins out of doors, is set in winter and uses images from the game of chess.

21. Neural activity measure, for short : EEG
An electroencephalogram (EEG) is a record of electrical activity caused by the firing of neurons within the brain. The EEG might be used to diagnose epilepsy, or perhaps to determine if a patient is “brain dead”.

25. Book between Mark and John : LUKE
The Gospel According to Luke is the longest of the four Gospels in the Bible. Some well-known stories are unique to Luke, and do not appear in the Gospels of Matthew, Mark nor John. A couple of examples would be “The Prodigal Son” and “The Good Samaritan”. It is believed that the author of the Gospel of Luke was the same person who wrote “Acts of the Apostles”.

26. Asian desert : GOBI
The large desert in Asia called the Gobi lies in northern China and southern Mongolia. The Gobi desert is growing at an alarming rate, particularly towards the south. This “desertification” is caused by increased human activity, and the Chinese government is trying to halt the desert’s progress by planting great swaths of new forest, the so called “Green Wall of China”.

27. “And giving ___, up the chimney he rose” : A NOD
The poem “A Visit from St. Nicholas” was published anonymously in 1823, and is better known today by its first line “‘Twas the night before Christmas”. Most scholars believe that the poem was written by Clement Clark Moore, a theologian from New York City. Others say that it was written by Henry Livingston, Jr. a poet from Upstate New York.

32. Iwo ___ : JIMA
Iwo Jima today is an uninhabited volcanic island located south of Tokyo. There were about a thousand Japanese civilians living on the island prior to WWII. In 1944, there was a massive influx of Japanese military personnel in anticipation of the inevitable US invasion. As the Japanese military moved in, the civilians were forced out and no one has lived there ever since.

44. Item resting on andirons : LOG
Andirons are those horizontal bars on which you rest logs to burn in an open fireplace. They usually come in pairs, and can be quite decorative and are often made out of wrought iron.

57. Letter add-ons, for short : PSS
One adds a PS (postscriptum, or simply “postscript”) at the end of a letter. A second postscript is a post postscriptum, a PPS.