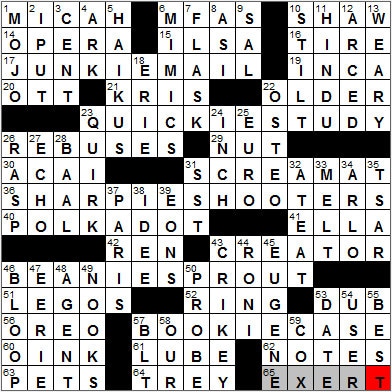 CROSSWORD SETTER: Zoe Wheeler & Aimee Lucido
THEME: i.e. Added … each of the theme answers is a well-known, two-part expression with “-IE” added onto the end of the first part:


Today’s Wiki-est, Amazonian Googlies
1. Child prodigy of “Heroes” : MICAH
The name “Micah” translates into English from Hebrew as “Who is like God?”

“Heroes” is a television show that ran on NBC from 2006 to 2010. It’s all about ordinary folk developing superhuman powers, sort of like many comic book characters.

10. “Pygmalion” playwright : SHAW
George Bernard Shaw’s play “Pygmalion” was of course adapted by Lerner and Loewe to become the Broadway musical “My Fair Lady”. The musical spun off the wonderful 1964 film of the same name, starring Audrey Hepburn and Rex Harrison.

George Bernard Shaw was a very successful Irish playwright. He is the only person to have been awarded both a Nobel Prize for Literature, and an Oscar. Shaw won his Oscar for adapting his own play “Pygmalion” for the 1938 film of the same name starring Leslie Howard and Wendy Hiller. Most people are more likely to have seen the musical adaption of “Pygmalion” that went by the title “My Fair Lady”.

14. “Falstaff” or “Fidelio” : OPERA
“Falstaff” is an opera by Giuseppe Verdi that draws on the character Falstaff from William Shakespeare’s “The Merry Wives of Windsor”. “Falstaff” was the maestro’s last opera, written while Verdi was in his 80s.

“Fidelio” is Ludwig van Beethoven’s one and only opera, and a work that he really struggled with. “Fidelio” tells of a woman who disguises herself as a prison guard in order get her condemned husband out of prison.

15. “Play it, Sam” speaker : ILSA
Ilsa Lund was of course played by Ingrid Bergman in the 1942 movie “Casablanca”. I love the words of one critic describing the chemistry between Bogart and Bergman in this film: “she paints his face with her eyes”. Wow …

16. Bridgestone product : TIRE
Bridgestone tires are manufactured around the world by the Shajiro Ishibashi company which is headquartered in Fukuoka, Japan. The company name “Ishibashi” means “stone bridge”, giving rise to the brand name “Bridgestone”.

19. Ancient Andean : INCA
Spanish conquistador Francisco Pizarro discovered the Incas in 1526, marking the beginning of the end for the ancient civilization that was to be ravaged by the brutal Spanish colonists and by imported smallpox. The last leader of the Incas was Atahualpa. Pizarro staged a mock trial and then condemned Atahualpa to execution by burning. A Spanish friar intervened on behalf of the condemned man, as Atahualpa believed that if he was burned his soul would not move on to the afterlife. Pizarro was kind enough to have Atahualpa garroted instead.

21. Kardashian matriarch : KRIS
Kris Kardashian is the matriarch of the Kardashian clan. She was married to the lawyer Robert Kardashian who was one of O. J. Simpson’s lawyers in his 1995 murder trial. The couple divorced in 1990 and Kris is now married to the famed decathlete from the 1976 Olympic Games, Bruce Jenner.

26. Picture puzzles : REBUSES
You’ll see rebus crosswords in the New York Times quite often. A rebus puzzle is one in which some squares are replaced with a symbol or picture (although we often use multiple letters when solving).

30. Berry for the health-conscious : ACAI
Açaí is a palm tree native to Central and South America. The fruit has become very popular in recent years and its juice is a very fashionable addition to juice mixes and smoothies.

41. “___ Enchanted” (2004 film) : ELLA
“Ella Enchanted” is the title of a fantasy novel written by Gail Carson Levine, published in 1997. The novel is a retelling of the story of Cinderella, with lots of mythical creatures added. A film adaptation was released in 2004, starring Anne Hathaway in the title role.

51. Building blocks : LEGOS
Lego is manufactured by Lego Group, a privately held company headquartered in Billund, Denmark. The company was founded by a carpenter called Ole Kirk Christiansen in 1934 and the now-famous plastic interlocking blocks were introduced in 1949. The blocks were originally sold under the name “Automatic Binding Bricks” but I think “Lego” is easier to remember! The name “Lego” comes from the Danish term “leg godt” meaning “play well”.

56. Cookie celebrating its centennial in 2012 : OREO
The Oreo was the biggest selling cookie in the 20th century, and almost 500 billion of them have been produced since they were introduced in 1912 by Nabisco. In those early days the creme filling was made with pork fat, but today vegetable oils are used instead. If you take a bite out of an Oreo sold outside of America you might notice a difference from the homegrown cookie, as coconut oil is added to give a different taste.

61. Jiffy ___ : LUBE
The first Jiffy Lube service center was opened in Ogden, Utah in the early seventies by one Ed Washburn. Washburn grew the business through franchises and sold it in 1979. Jiffy Lube has been owned by Shell Oil since 2002.

64. “South Park” writer Parker : TREY
Trey Parker is one of the co-creators of “South Park” the animated television show, along with Matt Stone.

Down
1. It’s stolen in an Austin Powers movie : MOJO
The word “mojo”, meaning magical charm or magnetism, is probably of Creole origin.

The character of Austin Powers was created by the actor who plays him, Mike Myers. Apparently Myers came up with the idea for Powers while listening to the Burt Bacharach song “The Look of Love”.

2. “___ a Spell on You” : I PUT
“I Put a Spell on You” is a song written and recorded by Screamin’ Jay Hawkins, first released in 1956. A cover version of the song was released in 2010 by Shane MacGowan and Friends, a record that was sold to help Concern Worldwide’s work in Haiti after the 2010 earthquake that killed so many. Included in the list of “friends” was Johnny Depp, playing the guitar.

5. 17-syllable poems : HAIKUS
A haiku is a very elegant form of Japanese verse. When writing a haiku in English we tend to impose the rule that the verse must contain 17 syllables. This restriction comes from the rule in Japanese that the verse must contain 17 sound units called “moras”, but moras and syllables aren’t the same thing. What the difference is though, is not so clear to me …

9. “My gal” of song : SAL
“My Gal Sal” is a song written by composer Paul Dresser. “My Gal Sal” is also the name of the movie recounting Dresser’s life made in 1942. It stars Victor Mature as Dresser, and Rita Hayworth as Sally “Sal” Elliott.

11. Bangalore believer, maybe : HINDU
Bangalore is the third most-populous city in India, and is located in the south of the country. Today Bangalore is known as the Silicon Valley of India because it is a center of excellence for all things related to the semiconductor and information technology industries. I had the privilege of spending a very enjoyable few days working in Bangalore when I was in that line of work.

18. ___ Lackawanna Railroad : ERIE
The Erie Lackawanna Railway operated between New Jersey and Chicago, and ran from 1960 to 1976. Although some of the routes are still in service today, the original company went bankrupt in the seventies, partly due to the completion of Interstate 80.

25. Multinational currency : EURO
The European Union today stands at a membership of 27 states. The Euro is the official currency of only 16 of the 27. The list of states not using the Euro includes the UK, Denmark, Sweden and Norway.

28. False deity : BA’AL
Ba’al can actually refer to any god, and sometimes even human officials as it can also be used as an honorific title. Ba’al can also be known as Hada, a god of rain, thunder, agriculture and fertility.

31. Fast jet, for short : SST
The most famous Supersonic Transport (SST) was the Concorde, a plane that’s no longer flying. Concorde had that famous “droop nose”. The nose was moved to the horizontal position during flight to create the optimum aerodynamic shape thereby reducing drag. It was lowered during taxi, takeoff and landing, so that the pilot had better visibility. The need for the droop nose was driven largely by the delta-shaped wings. The delta wing necessitates a higher angle of attack at takeoff and landing than conventional wing designs, so the pilot needed the nose lowered so that he or she could see the ground.

34. Singer Guthrie : ARLO
Arlo Guthrie is the son of Woody Guthrie. Both father and son are renowned for their singing of protest songs about social injustice. Arlo is most famous for his epic “Alice’s Restaurant Massacree”, a song that lasts a full 18m 34s. In the song Guthrie tells how, after being drafted, he was rejected for service in the Vietnam War based on his criminal record. He had only one incident on his public record, a Thanksgiving Day arrest for littering and being a public nuisance when he was 18-years-old.

35. Romanov ruler : TSAR
The last ruler of Imperial Russia was Tsar Nicholas II (of the House of Romanov). Famously, the Tsar and his family were murdered in 1918 in the basement of a house in Yekaterinburg, Russia by members of the Bolshevik secret police. The Tsar’s youngest daughter was 16-year-old Anastasia and rumors of her escape have persisted for years. The rumors grew with the help of numerous women who claimed to be Anastasia, but DNA testing has proven that all claims were false. In 2009, DNA testing finally proved that the remains of all of the Tsar’s immediate family, including Anastasia, have been found and identified.

44. Rice-A-___ : -RONI
Rice-a-Roni was introduced in 1958 by the Golden Grain Macaroni Company of San Francisco. The company was run by an Italian immigrant and his four sons. The wife of one of the sons served a pilaf dish at a family diner that was a big hit, so her brother-in-law created a commercial version by blending dry chicken soup mix with rice and macaroni. Sounds like “a San Francisco treat” to me …

45. Oregon city : EUGENE
Eugene is the second largest city in the state of Oregon. Eugene takes its name from the city’s founder, Eugene Franklin Skinner. Skinner put up the first cabin in the area in 1846, and the location became known as Skinner’s Mudhole. Four years later Skinner’s cabin was registered as a post office, and Skinner founded the city of Eugene in 1862.

57. Sandwich usually served with mayo : BLT
The BLT (bacon, lettuce and tomato) is the second most popular sandwich in the US, after the plain old ham sandwich.

59. Actress Courteney : COX
Courteney Cox played Monica Geller on the incredibly successful sitcom “Friends”. Before “Friends” she played the girlfriend of Michael J. Fox’s character on “Family Ties” for a couple of years in the late eighties. Her role in “Friends” was her biggest success, no question, when she and her fellow female costars became the highest paid TV actresses ever, earning a million dollars per episode.