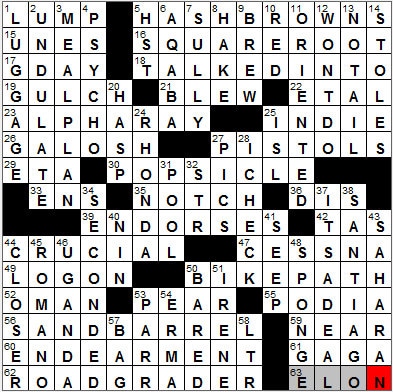 
Today’s Wiki-est, Amazonian Googlies
5. They often come with eggs : HASH BROWNS
“Hash”, meaning a dish of beef and vegetables mashed together, is a very American term and one that really surprised me when I first came across it. “Hash” just seems like such an unappetizing item, but I soon found out how delicious it was. The name “hash” in this context comes from the French “hacher” meaning “to chop”. Back in the early 1900s the dish called “hashed browned potatoes” was developed, which quickly morphed into “hashbrowns”. From there the likes of corned beef hash was introduced.

15. Catalan article : UNES
Catalonia is an autonomous community in the very northeast of Spain. The capital of Catalonia is the city of Barcelona. Sandwiched between Catalonia and France to the north, is the lovely Principality of Andorra, nestled in the Pyrenees.

16. What cuts power in half? : SQUARE ROOT
Taking the square root of a number with an exponent, cuts that exponent in half.

“Sheila” is a slang term used in Australia for a young woman.

19. Coulee : GULCH
In the western US a coulee is a deep gulch or ravine (as in the Grand Coulee Dam).

23. Product of some decay : ALPHA RAY
There are many types of radiation. Alpha rays are streams of alpha particles. There are basically helium nuclei, two protons and two neutrons bound together. Alpha particles are emitted by many different types of radioactive elements in the process known as alpha decay.

33. Five in the ninth inning? : ENS
There are five letters N (ens) in the term “ninth inning”.

47. Silverwing flier : CESSNA
The Cessna Aircraft manufacturing company was founded in 1911 by Clyde Cessna, a farmer from Kansas. Cessna is headquartered in Wichita and today has over 8,000 employees.

52. The toe of a boot? : OMAN
The Arabian Peninsula is shaped like a boot, with the Sultanate of Oman occupying the toe of that boot.

Oman lies on the southeast coast of the Arabian Peninsula and is neighbored by the OAE, Saudi Arabia and Yemen. The capital city of Muscat has a strategic location on the Gulf of Oman and has a history of invasion and unrest. Centuries of occupation by the Persians ended in 1507 when the Portuguese took the city in a bloody attack. The Portuguese held Muscat for much of the next one hundred years until finally ousted by local Omani forces in 1648. A Yemeni tribe invaded the area in 1741 and set up a monarchy that has been in place ever since.

53. Schnapps choice : PEAR
“Schnapps” isn’t actually a German word, but is our English spelling of the German “Schnaps” (note the “pp” versus “p”). Germans use the word Schnaps to describe any strong alcoholic drink. We tend to use Schnapps to mean a liqueur, usually a sweet beverage flavored with fruit. “Schnaps” is a Low German noun meaning “swallow”.

Down
5. One of the subjects of the best-selling ’02 book “The Conquerors” : HST
Harry Truman wanted to go to West Point having served with the Missouri Army National Guard on active duty in WWI, but he couldn’t get in because of his poor eyesight. He didn’t have the money to pay for college anywhere else. He did manage to study for two years towards a law degree at the Kansas City Law School in the twenties, but he never finished his schooling. So, Harry S. Truman was the last US President (out of a list of ten) who did not have a college degree.

“The Conquerors: Roosevelt, Truman and the Destruction of Hitler’s Germany, 1941-1945” is a book by Michael Beschloss, published in 2002.

6. King Hussein Airport locale : AQABA
The coastal city of Aqaba is the only seaport in the country of Jordan. The city lies at the very northern tip of the Gulf of Aqaba, which is off the Red Sea.

10. Like the Phillies’ caps : RED
I am proud to say that I made it to Philadelphia’s historic Veteran’s Stadium for a baseball game on a road trip a few years ago. The Phillies played their first game there in April 1971, and their last in September 2003. The stadium was demolished in 2004.

13. Manx trait : NO TAIL
I’ve seen Manx cats by the dozen on their native island. They’re found all over the Isle of Man, located in the middle of the Irish Sea (and hence the name “Manx”). Manx cats have no tails, they really don’t.

14. Some ermines : STOLES
A stole is a lady’s accessory, a narrow shawl. It can be made of quite light decorative material, or it can be heavier especially if made of fur.

Ermine is another name for the stoat. The stoat has dark brown fur in the summer, and white fur in the winter. Sometimes the term “ermine” is reserved for the animal during the winter when the fur is white. Ermine skins have long been prized by royalty and are often used for white trim on ceremonial robes.

20. Securing device : HASP
The “hasp” of a lock might refer to more than one thing. The u-shape loop protruding from a padlock is often called a “lock hasp”, for example.

38. Universidad de las Américas site : SANTIAGO
Santiago de Chile is the capital city of Chile. Even though it is the capital, the National congress doesn’t meet there and instead convenes in the port city of Valparaíso just under 150 km away.

Universidad de las Américas is a private school in the motropolitan area of Santiago in Chile. It was founded in 1988.

40. “Children of the Albatross” novelist : NIN
Anaïs Nin was a French author, famous for the journals that she wrote for over sixty years from the age of 11 right up to her death. She also wrote highly regarded erotica, citing D. H. Lawrence as someone from whom she drew inspiration.

41. Osmose : SEEP
Osmosis is the movement of a solvent (often just water) across a semi-permeable membrane. In the process of osmosis, the solvent tends to flow from an area of less concentration to an area of higher concentration.

43. Like much of Niger : SAHARAN
The Republic of Niger is a landlocked country in Western Africa that gets its name from the Niger River. 80% of the country lies within the bounds of the Sahara Desert.

45. Swiss alternative : ROMANO
“Romano” is actually an American term, and is used for a selection of hard and salty cheeses that are typically grated. One of these cheeses is the Italian Pecorino Romano, from which we get the name “Romano”.

46. Big coffee exporter : UGANDA
Uganda is a landlocked county in East Africa lying just to the west of Kenya. Uganda was ruled by the British as a protectorate from 1894 and gained independence in 1962. Uganda is very much associated with the tyrannical rule of Idi Amin in the 1970s.

51. Daughter of Zeus and Themis : IRENE
Eirene (also “Irene”) was the Greek goddess of peace, with “eirene” being the Greek word for “peace”. The Roman equivalent to Eirene was the goddess Pax.

53. “The Incredibles” family name : PARR
“The Incredibles” is a 2004 animated feature from Pixar, and is not a great movie if you ask me. But asking me probably isn’t a good idea, as the film won two Oscars …

54. Aretha’s Grammy-nominated sister : ERMA
Erma Franklin was an R&B and gospel singer. She was the elder sister of Aretha Franklin. Erma toured with Aretha for a while, and even recorded backup vocals on her sister’s big hit “Respect”.

58. Photocopier abbr. : LTR
Like so many things it seems, our paper sizes here in North America don’t conform with the standards in the rest of the world. ISO standard sizes used elsewhere have some logic behind them in that the ratio of width to length is usually one to the square root of two. This mathematical relationship means that when you cut a piece of paper in two each half preserves the aspect ratio of the original, which can be useful in making reduced or enlarged copies of documents. Our standard size of “letter” (8.5 x 11 inches) was determined in 1980 by the Reagan administration to be the official paper size for the US government. Prior to this, the “legal” size (8.5 x 14 inches) had been the standard, since 1921.