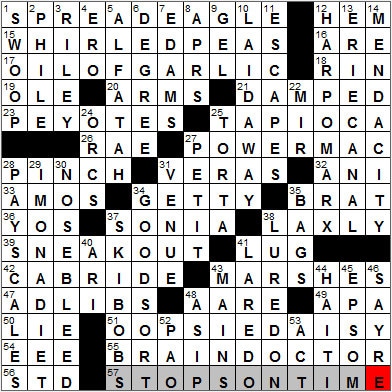 
Today’s Wiki-est, Amazonian Googlies
15. What may be visualized via a bumper sticker? : WHIRLED PEAS
Apparently there is a famous bumper sticker that says “Visualize Whirled Peas”, a play on “visualise world peace”, I guess.

The singer Prince was born in Minneapolis, and he lives there to this day. He took his stage name from his father, a jazz musician who used the name Prince Rogers when performing.

19. Motivator for Manolete : OLE
Manolete (real name Manuel Sanchez) was a famous bullfighter in Spain. A bull got his own back one day in 1947 when Manolete was just 30-years-old. After the bullfighter killed four bulls one day, the fifth managed to defend himself and fatally gored his tormentor.

23. Mexican cacti : PEYOTES
The peyote is a small spineless cactus that is native to southwestern Texas and Mexico. When ingested, the peyote is known to have a psychoactive effect. One of the psychoactive alkaloids in peyote is mescaline, a drug of choice for the likes Aldous Huxley and Pablo Picasso.

25. Dessert served in a bowl : TAPIOCA
The cassava plant is a woody shrub native to South America grown largely for its carbohydrate-rich tubers. In fact, the cassava is the third largest food source of carbohydrates (for humans) in the world. Ordinarily, the carbohydrate is extracted from the plant and dried as flour, and called tapioca.

26. 2006 Newbery winner Lynne ___ Perkins : RAE
Lynne Rae Perkins is an author and illustrator of children’s books. In 2006 she won the Newbery Medal for her novel “Criss Cross”.

27. It replaced Apple’s Quadra line : POWER MAC
Apple made a line of workstation personal computers called Power Macintosh (and then simply Power Mac). The line was introduced in 1994 and last produced in 2006.

31. Tennis’s Zvonareva and others : VERAS
Vera Zvonareva is a Russian tennis player who made it to the number-two world ranking in 2000.

33. Old Testament shepherd : AMOS
Amos is one of the twelve minor prophets in the Hebrew Bible. Before becoming a prophet, Amos was sheep herder and a fig farmer.

34. Magnate who wrote “How to Be Rich” : GETTY
Jean Paul Getty was famous as an industrialist, but also as a grandfather who had a grandson kidnapped for ransom. John Paul Getty III was 16 years old when he was taken in Rome in 1973. The ransom demand to his father was for $17 million, a sum that he had to ask from the child’s grandfather, as he was the one with all the money. Jean Paul Getty refused to pay and 4 months later an envelope was delivered to the family containing a lock of hair and an ear. The grandfather then entered into negotiation with the kidnappers, beat them down to $2 million, and the boy was released. Getty’s grandson never really recovered. He got into drugs and an overdose left him speechless, blind and paralyzed. Sad story …

37. Mrs. Rajiv Gandhi : SONIA
Sonia Gandhi is the president of one of the major political parties in India, the Indian National Congress. She is the widow of the former Prime Minister of the country, Rajiv Gandhi, who was assassinated in 1991.

43. Where rails come together : MARSHES
Rails are birds of the family Rallidae (hence their name). Outside of America, the name “rail” tends to be reserved for long-billed species, the term “crake” is used for short-billed species.

47. Many stand-up lines : AD LIBS
“Ad libitum” is a Latin phrase meaning “at one’s pleasure”. In common usage the phrase is usually shortened to “ad lib”. On the stage the concept of an “ad lib” is very familiar. For example, an actor who substitutes his own words for forgotten lines uses an ad lib, or a director may instruct an actor to use his or her own words at a particular point in a performance to promote a sense of spontaneity.

48. Drainer of most of Switzerland : AARE
The Aar (also called the Aare in German) is the longest river entirely in Switzerland. A famous spot along the river is the Reichenbach Falls in the center of the country, actually a series of waterfalls near the city of Meiringen. The falls are celebrated in the world of literature as it was here that Sherlock Holmes fell to his supposed doom with his nemesis Professor Moriarty (in “The Adventure of the Final Problem”).

The type of slip-on shoe called a “loafer” dates back to 1939. “Loafer” was originally a brand name introduced by the store Fortnum and Mason’s in London.

56. Not automatic: Abbr. : STD
A car that doesn’t have an automatic transmission is probably a standard shift.

Down
2. Follower of Franco? : -PHILE
A Francophile (also a Gallophile) is someone who loves France and all things French.

3. “My Philosofy” poet : RILEY
James Whitcomb Riley spent most of his life in Indianapolis, and earned for himself the moniker “The Hoosier Poet”.

4. Ranch extension? : -ERO
A ranchero is one employed on a ranch, a word with Spanish roots.

5. Palestinian group : AL FATAH
Fatah is actually an acronym, formed from the initials (in reverse) of “Palestinian National Liberation Movement”. It is the largest political party in the Palestine Liberation Organization.

7. Some Dutch wheels : EDAMS
One cheese that is recognized by its coating is Edam. Edam cheese takes the name after the Dutch town of Edam in North Holland. It is famous for its coating of red paraffin wax, a layer of protection that helps it travel well and prevents spoiling. You might occasionally come across an Edam cheese that is coated in black wax. This means that the underlying cheese has been aged for a minimum of 17 weeks.

12. He “spoke” with horns and whistles : HARPO MARX
The five Marx Brothers were born to “Minnie” and “Frenchy” Marx in New York City. The more famous older boys were Chico, Harpo and Groucho. The youngest brother, Zeppo, appeared in the early Marx Brothers movies, but the fifth son, Gummo, he went off to pursue his own career off the stage.

13. The Seneca Chief was the first to travel its full length : ERIE CANAL
The Erie Canal runs from Albany to Buffalo in the state of New York. What the canal does is allow shipping to proceed from New York Harbor right up the Hudson River, through the canal, and into the Great Lakes. When it was opened in 1825 it had immediate impact on the economy of New York City and locations along its route. It was the first means of “cheap” transportation from a port on the Atlantic seaboard into the interior of the United States. Arguably it was the most important factor contributing to the growth of New York City over competing ports such as Baltimore and Philadelphia. It was largely because of the Erie Canal that New York became such an economic powerhouse, earning it the nickname of the Empire State.

22. Onetime Soyuz destination : MIR
Mir was a remarkably successful project, with the station still holding the record for the longest continuous manned presence in space, at just under ten years. Towards the end of its life however, the years began to take their toll. There was a dangerous fire, multiple system failures, and a collision with a resupply ship. The Russian commitment to the International Space Station drained funds for repairs, so Mir was allowed to reenter the Earth’s atmosphere in 2001.

24. Foes of Frodo : ORCS
According to Tolkien, Orcs are small humanoids that live in his fantasy world of Middle-earth. They are very ugly and dirty and are fond of eating human flesh.

Frodo Baggins is a principal character in J. R. R. Tolkien’s “The Lord of the Rings”. Frodo is a hobbit, and was charged with the quest of destroying Sauron’s Ring in the fires of Mount Doom.

25. Cake, in Cali : TORTA
In terms of population, Cali is the third largest city in Colombia. Santiago de Cali (the full name for the city) lies in western Columbia. Apparently, it is a destination for “medical tourists”. Surgeons in Cali have a reputation as being expert in cosmetic surgery and so folks looking for a “cheap” nose job are apparently heading there.

27. Little, in Lille : PETIT
Lille is a large city in very north of France sitting right on the border with Belgium. The name “Lille” is a derivation of the term “l’isle” meaning “the island”.

30. Common sock damage : NOSE BLEED
If someone gets a sock on the nose, it might result in a nose bleed.

34. Mensch : GOOD SORT
Mensch is yet another word that comes to us via Yiddish, ultimately derived from the German “mensch” meaning “human being”. We use the term to mean someone of integrity and honor.

37. Winter sport vehicles : SKIBOBS
A skibob is a winter vehicle with a bicycle-type frame attached to skis rather than wheels.

40. Cal-Nev-___ : ARI
Cal-Nev-Ari is a town in Nevada, the very south of the state. It is located near to the borders of California and Arizona, hence the name.

41. Annual Jalapeño Festival site : LAREDO
Laredo is a border city in Texas, situated on the banks of the Rio Grande across the border from Nuevo Laredo in Mexico.

44. Modern-day locale of the place where the Santa Maria ran aground in 1492 : HAITI
The Caribbean island of Hispaniola was a target for European settlers and ended up being a disputed territory between France and Spain. The two countries divided the island with the French taking control of the western third, which they named Saint-Domingue. Saint-Domingue was later to become the independent, and French-speaking, Republic of Haiti.

When Columbus made his famous voyage of discovery, the largest of his three ships was the Santa Maria. The Santa Maria ran aground on the coast of Hispaniola on Christmas Day in 1492, and was lost. 39 of Columbus’s men were left behind with the permission of the locals. These men stripped the timbers from the Santa Maria and used them to build a settlement they called La Navidad (Spanish for “Christmas”). La Navidad is now the modern town of Môle-Saint-Nicolas in the Republic of Haiti.

45. Oaks Stakes setting : EPSOM
The Surrey town of Epsom in England is most famous for its racecourse, at which is run the Epsom Derby every year, one of the three races that make up the English Triple Crown. You might also have heard of Epsom salt. Epsom salt is magnesium sulfate, originally prepared by boiling down mineral waters. Epsom was indeed a spa town at one time.

46. ___ fire (destructive 2008 blaze in Los Angeles) : SAYRE
The Sayre Fire of 2008 was a wildfire that caused more loss of property than any other fire in the history of Los Angeles. 489 residences were destroyed, although thankfully there were no fatalities.

52. Kung ___ chicken : PAO
Sichuan (also Szechwan) is a province in southwest China. It is noted for its cuisine, which is hot and spicy as it uses plenty of garlic, chili peppers and the Sichuan peppercorn. A famous Szechwan dish in the US is Kung Pao chicken.