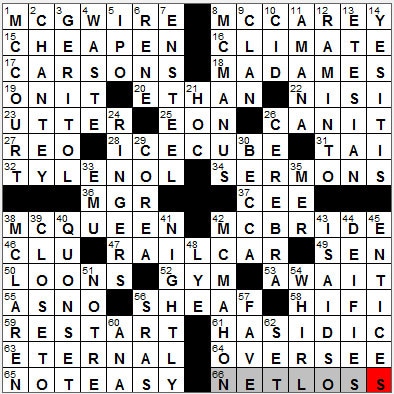 
Today’s Wiki-est, Amazonian Googlies
Across
1. Cardinal making many round trips : MCGWIRE
Baseball player Mark McGwire hit an awful lot of home runs during his playing career. He hit a home run about once every 11 times he was at bat, the best performance in baseball history. He surpassed the record of Babe Ruth who hit a homer about once ever 12 times at bat. The difference though, was that Ruth didn’t take performance-enhancing drugs during his career, which McGwire admitted to using, in 2010.

8. “Going My Way” Best Director winner : MCCAREY
Leo McCarey was a remarkably successful Hollywood director and screenwriter. Among his earlier films were “Duck Soup” (1933) starring the Marx Brothers, and “The Awful Truth” (1937) which to some extent launched the career of Cary Grant. He also directed “Going My Way” (1944) starring Bing Crosby, which was so successful that McCarey’s share in the profits gave him the highest reported income in the whole country in 1944.

17. “___ Comedy Classics” (syndicated TV series) : CARSON’S
“Carson’s Comedy Classics” was made up of highlights from the first 20 years of “The Tonight Show Starring Johnny Carson”. It was narrated by Ed McMahon.

18. Pompadour and others : MADAMES
Madame de Pompadour was the very official and well catered-to mistress of Louis XV of France. She lives on in popular culture in a number of ways, including the Pompadour hairstyle. At one time she wore her hair swept back from her forehead, but with a wave that made the front of her hair bulge forward. Her name became associated with the style, and so it remains today. The style became fashionable with so-called rockabilly artists in the later fifties, including one Elvis Presley.

20. Brand of literature : ETHAN
Nathaniel Hawthorne wrote the short story “Ethan Brand – A Chapter from an Abortive Romance”, in 1850.

22. Like some divorce decrees : NISI
A decree nisi is a court order, one that only comes into force when certain specified conditions are met. At the point where the conditions are met, it becomes a decree absolute and is binding. “Nisi” is Latin for “unless”.

27. Flying Cloud maker : REO
The REO Motor Company was founded by Ransom E. Olds (hence the name REO). The company made cars, trucks and buses, and was in business from 1905 to 1975 in Lansing, Michigan.

31. Sea bream, in a sushi bar : TAI
Tai is the Japanese name for sea bream.

Georg Bizet was a French composer active in the Romantic era. Bizet’s most famous work has to be his opera “Carmen”. “Carmen” received a lukewarm reception from the public, even though his fellow composers had nothing but praise for it. Sadly, Bizet died very young, at only 36, before he could see “Carmen’s” tremendous success.

38. The King of Cool : MCQUEEN
Apparently Steve McQueen wasn’t the easiest actor to work with, at least as far as directors were concerned. He pretty much had a free rein though, as he was so popular with the public in the seventies (he had the nickname “The King of Cool”). He was the highest paid movie star in 1974.

42. Martina with five #1 country hits : MCBRIDE
Martina McBride is a country music singer and songwriter. She is sometimes known as the “Céline Dion of Country Music”, which means nothing to me!

46. Actor Gulager : CLU
Clu Gulager is a television and film actor. He is most remembered for playing Billy the Kid in the TV show “The Tall Man” in the early sixties, and then as Emmet Ryker in “The Virginian” in the late sixties.

2. Sea air? : CHANTEY
“Chantey” is a variant spelling of “shanty”, a song that was used to accompany work on sailing vessels. “Shanty” might be derived from the word “chanter”, French for “to sing”.

3. Alternative to One A Day : GERITOL
The “Geritol” brand name was very carefully chosen at the time it was introduced, in 1950, to suggest that it is efficacious for us as we move on in years. In general, the formula has always featured iron and several B-complex vitamins. Geritol ran afoul of the Federal Trade Commission (FTC) in the early sixties due to its claims that it is effective in relieving tiredness, regardless of the cause. In 1965, the company was instructed by the FTC to make it clear in its advertising that Geritol’s formula is only effective in relieving tiredness in individuals suffering from anemia (a lack of iron).

5. Co. milestone : IPO
An Initial Public Offering (IPO) is the very first offer of stock for sale by a company on the open market. In other words it marks the first time that a company is traded on a public exchange. Companies have a IPO to raise capital to expand (usually). Anyone owning stock in the company prior to the IPO can find that after the IPO that stock is now worth something on the market (as opposed to just on paper), and can become quite wealthy overnight.

6. Lacoste of tennis : RENE
René Lacoste was a French tennis player known for being very tenacious on court. This tenacity earned him the nickname “the Crocodile”. When he went into the clothing business, specializing in tennis apparel, his Lacoste brand became famous for its green crocodile logo.

8. George ___, “Bringing Up Father” cartoonist : MCMANUS
“Bringing up Father” was a very successful comic strip created by George McManus. It ran for 87 years, from 1913. It was also known informally as “Jiggs and Maggie” after the main characters in the strip.

10. Alfonso VI exiled him, with “the” : CID
Rodrigo Diaz de Vivar was known as El Cid Campeador, which translates as “The Champion” or perhaps “The Lord, Master of Military Arts”. El Cid was a soldier who fought under the rule of King Alfonso VI of Spain (among others). However, he was sent into exile by the King in 1080, after acting beyond his authorization in battle. El Cid then offered his services to his former foes, the Moorish kings, After a number of years building a reputation with the Moors, he was recalled from exile by Alfonso. By this time El Cid was very much his own man. Nominally under the orders of Alfonso, he led a combined army of Spanish and Moorish troops and took the city of Valencia on the Mediterranean coast, making it is headquarters and home. He died there, quite peacefully in 1099.

11. Dryer option : AMANA
The Amana Corporation takes its name from the location of its original headquarters, in Middle Amana, Iowa.

13. Like some annual Mediterranean winds : ETESIAN
The etesian winds are an annual occurrence on the Mediterranean. As such, it’s no surprise that “etesian” is Greek for “annual”.

21. Post ___ : HOC
The term “post hoc” is used to describe a conclusion made about an earlier event at the time of a later event. Post hoc reasoning is basically an argument late in the day that the earlier event caused the later event, if you know what I mean!

24. Faux amateurs : RINGERS
A “ringer” was originally a fast horse that was substituted surreptitiously into a race for a slower one. The term was derived from the verb “to ring in”, meaning to substitute.

26. Think pieces? : CEREBRA
The cerebra are the two hemispheres of the brain.

29. 1978 Grammy winner for the jazz album “Friends” : COREA
Chick Corea is an American jazz pianist. He is noted for his work in the area of jazz fusion, and for his promotion of Scientology. (NB: Dick Elton, below, points out that Chick Corea actually won his Grammy in 1979, and not 1978. Thank you, Dick!)

30. Daughter on ABC’s “Life Goes On” : BECCA
“Life Goes On” is a television show that aired in the early nineties. It is noted for being the first TV series to feature a main character who had Down syndrome.

33. Noted six-foot runner : EMU
The emu has had a tough time in Australia since man settled there. There was even an “Emu War” in Western Australia in 1932 when migrating emus competed with livestock for water and food. Soldiers were sent in and used machine guns in an unsuccessful attempt to drive off the “invading force”. The emus were clever, breaking their usual formation and adopting guerrilla tactics, operating as smaller units. After 50 days of “war”, the military withdrew. Subsequent requests for military help for the farmers were ignored. The emus had emerged victorious …

The Ionian Sea is the part of the Mediterranean that lies between Greece and the southern part of Italy (under the sole of the “boot”). It is one of the most seismically active areas on the planet.

38. Formula One racing legend Bruce : MCLAREN
Bruce McClaren was a race-car driver and designer from New Zealand. He was very successful during the sixties. The race team that he founded is still active and successful today. McClaren himself died while testing a car at the Goodwood Circuit in England in 1970.

40. Old shippable shelter : QUONSET
Quonset huts are prefabricated galvanized steel structures, semicircular in cross section. The Quonset hut design is based on the British Nissen hut that was used during WWI. The hut takes its name from Quonset Point near Davisville, Rhode Island. It was there that the first Quonset huts were manufactured, in 1941.

42. “For Laughing Out Loud” memoirist : MCMAHON
Of course Ed McMahon was Johnny Carson’s sidekick on “The Tonight Show”. McMahon was trained as a fighter in WWII, but did not see action. However, he did fly 85 combat missions in Korea.

48. Burning stuff : LYE
When we purchase what is labelled as “lye” today, it is caustic soda (sodium hydroxide). To clean out drains we might buy Crystal Drano which is sodium hydroxide (lye) mixed with sodium nitrate, sodium chloride (table salt) and aluminum. The contents of Drano work in concert to clear the clog. The lye reacts with any fats creating soap which may be enough to break up the clog. Also, the finely divided aluminum reacts with water creating tremendous heat so that that mixture boils and churns, then any hair or fibers are cut by the sharp edges of the nitrate and chloride crystals. Having said all that, I find that boiling water poured down the drain almost always does the job …