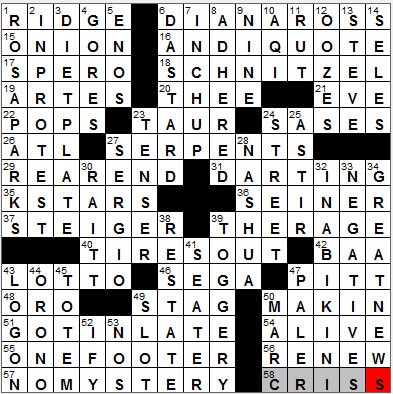 6. Billboard once named her “Female Entertainer of the Century” : DIANA ROSS
Diana Ross is one of the most prolific recording artists in history. She sang with the Supremes from 1959 to 1970 and then launched an incredibly successful solo career. Ross was listed in the 1993 edition of “The Guinness Book of World Records” as the most successful music artist ever, with eighteen #1 records.

18. Veal dish : SCHNITZEL
Schnitzel is an Austrian dish made from slices of meat that have been tenderized and thinned with a wooden mallet, and then coated in bread crumbs and fried. The variant known as Wiener Schnitzel (i.e. Viennese schnitzel) is usually made from veal, although now that veal had fallen into disfavor due to concerns about animal rights, it is often made from pork.

26. Part of A.S.T.: Abbr. : ATL
Atlantic Standard Time (AST) is four hours behind Greenwich Mean Time, and one hour ahead of Eastern Standard Time. The list of locations that use AST includes Puerto Rico and the Canadian provinces of New Brunswick and Nova Scotia.

31. Moving like hummingbirds : DARTING
Hummingbirds are the smallest of all the birds. The species known as the Bee Hummingbird is native to Cuba and weighs less than a tenth of an ounce and is about two inches in length!

35. Pollux and Aldebaran : K-STARS
Stars are usually classified based on the color of the light that they emit. These classifications are, from hottest to coolest, O, B, A, F, G, K and M. One way to remember the order of these letters is to use the mnemonic “Oh, be a fine girl, kiss me”. The colors of these stars range from blue (class O) to red (class M). Our sun is class G, a yellow star, but I think we all know that …

36. Certain fisherman : SEINER
A seine is a type of fishing net. It is long and thin, with floats along one long edge (the top) and weights along the bottom edge so that it hangs down in the water. A seine is usually paid out into the water from a boat, as the vessel moves slowly in a circle driving fish into the center of the net.

37. Capone portrayer, 1959 : STEIGER
Rod Steiger played some powerful roles on the screen, perhaps most memorably the Chief of Police in the 1967 drama “In the Heat of the Night”, for which he won a Best Actor Oscar. Steiger was married five times, including a 10-year marriage to fellow actor Claire Bloom. Together Bloom and Steiger had a daughter, the British opera singer Anna Steiger.

40. Flags : TIRES OUT
Our verb “to flag” meaning “to tire” was originally used in the sense of something flapping about lazily in the wind. From this it came to mean “to go limp, droop”, and then “to tire”.

42. Cry repeated in “The Whiffenpoof Song” : BAA
The Yale Whiffenpoofs are an a capella group based in Yale University. They are the oldest such university group in this country, established in 1909. “The Whiffenpoof Song” is the group’s traditional closing number. It was first performed back in 1909, and has been recorded by many artists including Rudy Vallee and Bing Crosby.

43. It causes many people to scratch : LOTTO
Originally “Lotto” was a type of card game, with “lotto” being the Italian for “a lot”. We’ve used “lotto” to mean a gambling game since the late 1700s.

46. Big maker of consoles : SEGA
The Genesis is a video game console sold in the US by the Japanese company Sega. In the rest of the world, the console is sold as the Mega Drive, as Sega couldn’t get the rights to the “Mega Drive: name in the United States.

47. Big East team : PITT
The Pitt Panthers are the athletic teams of the University of Pittsburgh.

48. Cortés’s quest : ORO
Hernán Cortés was the Spanish Conquistador who led the 16th-century expedition to North America that brought an end to the Aztec Empire.

50. “___ It,” 1979 top 10 hit : MAKIN’
“Makin’ It” was a 1979 hit for actor and singer David Naughton. It was the theme song for the sitcom of the same name in which Naughton starred. The song lasted longer in the Top 40 than did the show though, as the sitcom was cancelled after only eight episodes.

51. Missed curfew, say : GOT IN LATE
Our word “curfew” comes from an Old French word meaning “cover fire”. In medieval days a bell would be ring in the evenings as a signal to bank the hearths in preparation for sleeping. The intent was to prevent uncontrolled fires starting from untended fireplaces.

56. Appeal of New York, e.g.? : RENEW
The publishers of “New York” magazine would like their subscribers to renew.

“New York” magazine was founded in 1968 as a direct competitor to “The New Yorker”.

Down
1. Onetime boycott instigator : ROSA PARKS
Rosa Parks was one of a few brave women in days gone by who refused to give up her seat on a bus to a white woman. It was the stand taken by Rosa Parks on December 1, 1955 that sparked the Montgomery, Alabama Bus Boycott. President Clinton presented Ms. Parks with the Presidential Medal of Freedom in 1996. When she died in 2005, Rosa Parks became the first ever woman to have her body lie in honor in the US Capital Rotunda.

9. Start of a call for help : NINE
The first use of an emergency phone number nationally was in the UK in 1937, where the number 999 was introduced to call emergency services. If you need emergency services in the UK or Ireland to this day, you have to dial 999. It’s not really clear why 911 became the emergency number in the US. The most credible suggestion (to me) is that when it was introduced by the FCC in 1967, it was a number that “fit” with the numbers already used by AT&T for free services (211-long distance; 411-information; 611-repair service).

13. Either co-founder of Apple : STEVE
Apple Computers was founded in 1976 by Steve Jobs, Steve Wozniak and Ronald Wayne. The company incorporated the following year, but without Wayne. He sold his share of the company back to Jobs and Wozniak … for $800!

14. 1991-92 U.S. Open winner : SELES
Monica Seles has a Hungarian name as she was born to Hungarian parents in former Yugoslavia. She was the World No. 1 professional tennis player in 1991 and 1992 before being forced from the sport when she was stabbed by a German spectator at a match in 1993. She did return to the game two years later, but never achieved the same level of success.

27. ___ Valente (clothing line) : SERGIO
Sergio Valente is a clothing brand out of the Seattle area. Dear old Sergio is just a brand, and not a real person at all …

28. 1955 Belmont and Preakness winner that shared its name with a U.S. city : NASHUA
The racehorse known as Nashua retired after the 1956 season. At that point he was only the second horse to have earned more than $1 million (the first was Citation).

30. “Love Sneakin’ Up on You” singer, 1994 : RAITT
Bonnie Raitt is a blues singer, originally from Burbank, California. She has won nine Grammies for her work, but she is perhaps as well known for her political activism as she is for her music. She was no fan of President George W. Bush, and she sure did show it.

32. How some calorie counters eventually want to look good : IN A BIKINI
The origin of the name “bikini”, a type of bathing suit, seems very uncertain. My favorite story is that it is named after the Bikini Atoll, site of American A-bomb tests in the forties and fifties. The name “bikini” was chosen for the swim-wear because of the “explosive” effect it had on men who saw a woman wearing the garment!

39. Duds : TOGGERY
“Toggery” is another word for clothing, sometimes shorted to “togs”. For example, back in Ireland we call a bathing suit “swimming togs”. The term “toggery” comes from the Latin “toga”.

“Duds” is an informal word for clothing, coming from the word “dudde” used around 1300 as the name for a cloak.

45. Venerated symbol : TOTEM
Totem is the name given to any entity that watches over a group of people. As such, totems are usually the subjects of worship. Totem poles are really misnamed, as they are not intended to represent figures to be worshiped, but rather are heraldic in nature often celebrating the legends or notable events in the history of a tribe.

50. Fashion designer Jacobs : MARC
Marc Jacobs is an American fashion designer from New York City with his own line of clothing. He is also the creative director for the French design house, Louis Vuitton.