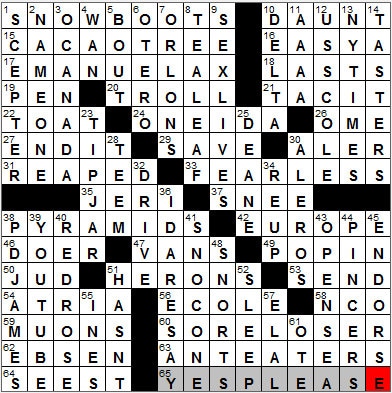 CROSSWORD SETTER: David Quarfoot
THEME: None
COMPLETION TIME: Did not finish!
ANSWERS I MISSED: Too many, all on the left side of the grid


Today’s Wiki-est, Amazonian Googlies
1. Timberlands, e.g. : SNOW BOOTS
The Timberland Company was founded in 1957 by Nathan Swartz, a shoe maker from Boston. The business’s first successful product was the waterproof boot called the Timberland. It was so successful that the company adopted Timberland for its name.

15. Chocolate source : CACAO TREE
Chocolate is made from the seeds of the Thobroma cacao tree. The seeds are very bitter, and the traditional drink make with the seed was called “xocolati” by the Aztecs, meaning “bitter water”. That’s how our “chocolate” got its name.

17. Grammy-winning pianist born in the U.S.S.R. : EMANUEL AX
The wonderful classical pianist Emmanuel Ax was born in Lviv, now in Ukraine. He arrived in New York City with his family when he was 12 years old. Ax regularly performs with the cellist Yo-Yo Ma.

20. Onetime fad doll : TROLL
Troll dolls were quite the fad when I was a young lad at school in the sixties. Everyone seemed to have a little troll doll that was fixed on the end of a pencil. They were created back in 1959 by a Danish fisherman and woodcutter called Thomas Dam. He made the first as a cheap Christmas gift for his young daughter as his family was very poor. Local children all wanted them, and sales of his “Dam Dolls” took off.

24. Big name in tableware : ONEIDA
Oneida Limited makes an awful lot of flatware, with operations all round the world. The company takes its name from Oneida, New York where the business started.

26. East End abode : ‘OME
The East End of London is home to the Cockney, and Cockneys are famous for dropping their aitches, as in “home” becoming “‘ome”.

30. O, e.g. : ALER
The Baltimore Orioles are sometimes known simply as the O’s.

The Baltimore Orioles was one of the eight charter teams of MLB’s American League, so the franchise dates back to 1901. Prior to 1901, the team has roots in the Minor League Milwaukee Brewers, and indeed entered the American League as the Brewers. In 1902 the Brewers moved to St. Louis and became the Browns. The team didn’t fare well in St. Louis, so when it finally relocated to Baltimore in the early fifties the team changed its name completely, to the Baltimore Orioles. The owners so badly wanted a fresh start that they traded 17 old Browns players with the New York Yankees. The trade didn’t help the team’s performance on the field in those early days, but it did help distance the new team from its past.

35. Ryan of “Boston Public” : JERI
Jeri Ryan’s most famous role is that of the de-assimilated Borg known as Seven of Nine, on “Star Trek: Voyager”. I haven’t seen that show, so I know Ryan from a supporting role on the legal drama “Shark”, playing opposite James Woods. She also plays Ronnie Cooke on “Boston Public”.

37. Weapon of old : SNEE
“Snick or snee” is the name given to cut and thrust while fighting with a knife. The phrase is rooted in a pair of Dutch words, and it gave its name to a “snee”, a light sword-like knife.

38. Saqqara attractions : PYRAMIDS
Saqqara is an ancient Egyptian burial ground located about 20 miles south of Cairo. The most famous tomb there is the Step Pyramid of Djoser, built way back in the 27th century BC.

42. One of a familiar septet : EUROPE
Europe is one of the seven continents.

54. Bright spots : ATRIA
In modern architecture, an atrium is a large open space, often in the center of a building and extending upwards to the roof. The original atrium was an open court in the center of an Ancient Roman house. One could access most of the enclosed rooms of the house from the atrium.

56. Nice place for studying? : ECOLE
French for school is “école”.

The city of Nice lies on the Mediterranean coast of France, not far from the Italian border. Although it is only the fifth most populous city, it has the second busiest airport in the country (after Paris), a reflection of the vast number of jet-setting tourists that flock to Nice and environs.

59. Unstable particles : MUONS
A muon is a subatomic particle similar to an electron but it is very unstable, with a mean lifetime of 2.2 microseconds.

62. “The Other Side of Oz” autobiographer : EBSEN
The actor Buddy Ebsen was best known for playing Jed Clampett in television’s “The Beverly Hillbillies”. Ebsen had been cast in the role of the Tin Man in the 1939 movie “The Wizard of Oz”, but he developed an allergy to the aluminium dust that was used in the makeup. He ended up in hospital and had to walk away from the part. Ebsen blamed “The Wizard of Oz” on persistent problems that he had with his lungs in subsequent years. But Ebsen lived 16 years longers that any of the other major cast members of the film, so maybe he got the last laugh!

63. U.C. Irvine athletes : ANTEATERS
UC Irvine is one of ten campuses in the University of California, and is located in Irvine, California just outside of Los Angeles. Irvine’s athletic teams have been called the anteaters since 1965, a name suggested by students in honor of the anteater in the Johnny Hart comic strip “B.C.”

Down
1. Symbol of power : SCEPTER
A scepter (“sceptre” in UK English) is a ceremonial staff often held by a monarch.

3. Song that ends “Protégera nos foyers et nos droits” : O CANADA
Canada’s national anthem was commissioned in 1880 by the Lieutenant Governor of Quebec, so the original words are in French. The first English translation was made in 1906. The current English lyrics have been revised a few times, but the French version remains the same as it did back in 1880.

7. Group that sang the 1962 hit “The Wah Watusi,” with “the” : ORLONS
The Orlons are an R&B group that formed back in 1960, one that is still going strong today over fifty years later.

8. Tasseographer’s bit : TEA LEAF
Tasseography is the name given to reading fortunes by interpreting the patterns of tea leaves, coffee grounds and wine sediments that are left in the bottom of a cup or glass.

10. Source of some blues : DELTA
Delta blues originated in the Mississippi Delta, first being recorded in the late twenties.

12. 2000 terrorist target : USS COLE
The USS Cole is a guided missile destroyer with a home port in Norfolk, Virginia. Famously, the Cole fell victim to a suicide attack by Al-Qaeda bombers who detonated an explosion on a boat close to the navy vessel while it was at anchor in Aden. 17 of the Cole’s crew members were killed in the attack which blew a hole in the port side of the ship.

14. Sommeliers, at times : TASTERS
“Sommelier” is the French word for a wine steward.

38. “The Children of Men” novelist : PD JAMES
P. D. James is an incredibly successful English author of crime fiction, with her most famous books being a series that features a policeman and sometime poet, Adam Dalgliesh. James’ 1992 novel called “The Children of Men” was adapted into a 2006 movie (“Children of Men”) starring Clive Owen and Julianne Moore. It tells of a world that develops after two generations of human infertility.

41. Syrupy treat : SNO-CONE
A sno-cone (also “snow cone”) is just a paper cone filled with crushed ice and topped with flavored water. Italian ice is similar, but different. Whereas the flavoring is added on top of the ice to make a sno-cone, Italian ice is made with water that is flavored before it is frozen.

57. Commercial name that means, literally, “skyward” : EL AL
El Al (Hebrew for “to the skies”) does not fly on the Sabbath, although this has been subject of some controversy at times since the airline’s founding in 1948.