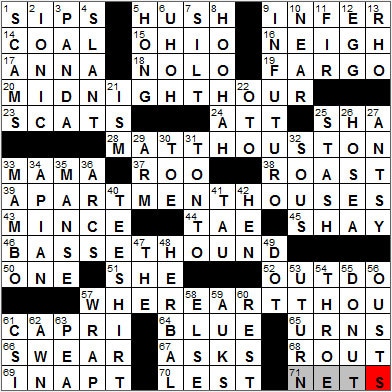 CROSSWORD SETTER: C. W. Stewart
THEME: WHERE ART THOU? … the letters THOU are hidden in each of the theme answers:

20A. Time in the title of a 1965 Wilson Pickett hit : MIDNIGH(T HOU)R
28A. TV oilman-turned-private eye : MAT(T HOU)STON
39A. Multiple-dwelling buildings : APARTMEN(T HOU)SES
57A. Question that follows “O Brother” in film … and a hint to this puzzle’s theme : WHERE ART THOU?


Today’s Wiki-est, Amazonian Googlies
Across
14. Bad child’s stocking filler : COAL
Apparently, the tradition of putting coal in the Christmas stocking of a poorly-behaved child comes simply from the proximity of the stocking (hanging on the fireplace) to a source of coal!

15. Indiana/Kentucky border river : OHIO
The Ohio is the largest tributary of the Mississippi by volume. In fact where the two rivers meet, in Cairo, Illinois, the Ohio is actually the larger of the pair.

17. Kendrick of “Up in the Air” : ANNA
“Up in the Air” is a really enjoyable comedy-drama from 2009, an adaptation of a novel of the same name by Walter Kirn. It’s all about life on the road and business travel, and stars George Clooney. It reminded me of my decades of business travel, something I usually enjoyed, to be honest. Clooney’s young sidekick in the movie is played very ably by Anna Kendrick.

18. ___ contendere : NOLO
“Nolo contendere” is a legal term that translates from the Latin as “I do not wish to contend”. It’s the plea of “no contest”, an alternative to “guilty” or “not guilty”, meaning that one doesn’t admit guilt but nor does one dispute the charge.

19. North Dakota city : FARGO
Fargo, North Dakota is the biggest city in the state. The original name for the city was Centralia, when it was a stopping point for steamboats that traveled the Red River in the late 19th century. The town really grew with the arrival of the Northern Pacific Railway, so the name “Fargo” was adopted in honor of one of the railroad company’s directors, William Fargo (of Wells Fargo Express fame).

23. Skedaddles : SCATS
Our word “scat” comes from a 19th-century expression “quicker than s’cat”, which meant “in a great hurry”. The original phrase probably came from the words “hiss” and “cat”.

“Skedaddle ” is a slang term meaning “run away”, and dates back to the Civil War.

25. Doo-woppers ___ Na Na : SHA
Do you remember the band “Johnny Casino & The Gamblers” in the movie “Grease”? That was actually the real-world group Sha Na Na. Johnny Casino & the Gamblers sang “Those Magic Changes” at the high school dance, in between “Rock’N Roll Is Here to Stay” and “Hound Dog”. Sha Na Na got together in the sixties, and are still performing today.

28. TV oilman-turned-private eye : MATT HOUSTON
“Matt Houston” is a private-eye drama that aired in the early to mid-sixties. It was about a wealthy Texas oilman, played by Lee Horsely, who worked as a private investigator in his spare time. I don’t think I’ve ever seen an episode.

37. Aussie bounder : ROO
The name “kangaroo” comes from the Australian Aborigine term for the animal. There’s an oft-quoted story that James Cook (later Captain Cook) asked a local native what was the name of this remarkable looking animal, and the native responded with “kangaroo”. The story is that the native was actually saying “I don’t understand you”, but as cute as that tale is, it’s just an urban myth.

38. Friars Club event : ROAST
The Friars Club is a private show-business club in New York City that has roots dating back to 1904. Back then the club was called the Press Agents Association. Within a few years the name was changed to reflect its broadening membership of actors and musicians. The name “Friar” was chosen as it comes from the Latin for “brother”, deemed to a good name for a fraternal organization.

44. Light bulb inventor’s inits. : TAE
Thomas Alva Edison was nicknamed “The Wizard of Menlo Park” by a newspaper reporter, a name that stuck with him. He was indeed a wizard, in the sense that he was such a prolific inventor, and he was associated with that location as his first research lab was in Menlo Park, New Jersey.

45. Light carriage : SHAY
A shay is a light carriage. It is an American design based on the French “chaise”, from which it takes its name. A shay is sometimes called a “whisky”, as riders would “whisk” around from stop to stop.

46. Droopy-eared dog : BASSET HOUND
The Basset Hound wouldn’t be my favorite breed of dog, to be honest. They do have a great sense of smell with an ability to track a scent that is second only to that of the Bloodhound. The name “Basset” comes from the French word for “rather low”, a reference to the dog’s short legs.

57. Question that follows “O Brother” in film … and a hint to this puzzle’s theme : WHERE ART THOU?
“O Brother, Where Art Thou?” is a comedy released in 2000, directed by the Coen Brothers and starring George Clooney. The film is based loosely on Homer’s “Odyssey”.

61. Grotto isle of Italy : CAPRI
64. Grotto color at 61-Across : BLUE
The island of Capri off the coast of Southern Italy has been a tourist resort since the days of ancient Rome. Capri is home to the famous Blue Grotto, a sea cave that is illuminated with sunlight that’s colored blue as it passes through the seawater into the cave.

70. “___ we forget …” : LEST
“Lest We Forget” is an oft-quoted phrase, one that comes from a poem by Rudyard Kipling called “Recessional”. Kipling wrote the piece on the occasion of the Diamond Jubilee of Queen Victoria in 1897, and used it to express sadness at the waning of the British Empire. The phrase “lest we forget” is used in this context, a warning that the empire will decline. Ever since WWI we’ve been using the words on memorials as a plea not forget the sacrifices made by others in the past.

Down
2. Greek column style : IONIC
An Ionic column is relatively ornate. It usually has grooves running up and down its length and at the top there is a “scroll” design called a “volute”. The scroll design makes it a popular inclusion in academic buildings.

3. Bamboo-munching critter : PANDA
Taxonomic classification of the giant panda has been a subject of great debate for years, the main question being whether it belongs to the bear or raccoon family. The accepted opinion these days, based on molecular studies, seems to be that the panda is in fact a true bear.

5. ___ Kong : HONG
Hong Kong first became part of the British Empire after the First Opium War in 1842. In 1898, Britain signed a 99-year lease to retain control of Hong Kong. That control ended 99 years later in 1997 with a formal transfer of sovereignty to China.

11. Douglas ___ : FIR
Various species of Douglas fir are native to North and Central America, and to Asia. The tree gets its name from the Scottish botanist David Douglas, who introduced the species into Europe.

12. Cadbury confection : EGG
The Cadbury Creme Egg is the biggest-selling confection in the UK from New Year’s Day up to Easter every year, which is no surprise to me. They’re wickedly delicious …

13. Letter before sigma : RHO
Rho is the Greek letter that looks just like our Roman letter “p”.

27. Prone to fidgeting : ANTSY
The word “antsy” embodies the concept of “having ants in one’s pants”, meaning being nervous and fidgety. However, “antsy” has been used in English since the 1830s, whereas “ants in the pants” originated a century later.

31. Scout’s rider of early TV : TONTO
On the television version of “The Lone Ranger”, Tonto was played by the actor Jay Silverheels.

33. Cuban musical form : MAMBO
The form of music and dance known as mambo developed in Cuba. “Mambo” means “conversation with the gods” in Kikongo, a language spoken by slaves taken to Cuba from Central Africa.

35. Parson’s home : MANSE
A manse is a minister’s home in various Christian traditions. “Manse” derives from “mansus”, the Latin for “dwelling”.

41. Letter after sigma : TAU
Tau is the 19th letter of the Greek alphabet, the letter which gave rise to our Roman “T”. Both the letters tau (T) and chi (X) were symbolically associated with the cross.

42. Old biddy : HEN
We use the term “biddy” to mean an “old woman”. Back in the mid-1800s, the term was developed over here in America and applied to an Irish maid-servant. Biddy is a nickname for a woman called Bridget.

49. Part of a pointillist painting : DOT
Pointillism is a style of painting that grew out of Impressionism. The pointillist technique calls for the artist to use small, distinct dots of bold color to build up the image. Pointillism was developed in the late 1800s by the great French painter, Georges Seurat. You can go see his magnificent work “A Sunday Afternoon on the Island of La Grande Jatte” at The Art Institute of Chicago the next time you’re in town.

54. Severe pang : THROE
Our contemporary word “throe”, meaning a spasm of pain, has been around since the early 1600s. It is a different spelling of the word “throwe” that had been used since around 1200 AD and which meant pain, particularly a pang of childbirth or the agony of death. Pain, from cradle to grave …

59. Razor-billed birds : AUKS
Auks are birds that look very similar to penguins, although they aren’t very closely related. Auks are expert swimmers and divers, but can also fly somewhat clumsily.

61. CBS drama with DNA testing : CSI
I’m told that the TV show “CSI” gets a lot of razzing by law enforcement professionals for its unrealistic portrayal of the procedures and science of criminal investigation. I don’t care though, as I just think it’s fun television. The original “CSI” set in Las Vegas seems to have “gone off the boil”, but the addition of Sela Ward to the cast of “CSI: NY” has really, really raised the level of the sister show centered around New York City.

62. Bristle on barley : AWN
An awn isn’t specific to barley. An awn is the name given to hair or bristle-like structures found in numerous species of plants. In some species, like barley, the awns can contain photosynthetic tissue.

63. Split ___ : PEA
When peas are dried, the skin can be removed and the seed naturally splits into two pieces called cotyledons. These cotyledons would have formed the first two leaves of the pea plant had it been allowed to germinate.