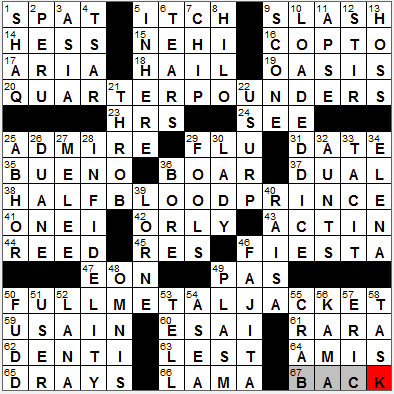 CROSSWORD SETTER: David Gray
THEME: Starts at the BACK … all of the theme answers start with a word that can go with BACK, all being associated with American football:


Today’s Wiki-est, Amazonian Googlies
Across
14. Gas company famous for its toy trucks : HESS
The Hess Corporation is an oil company based in New York City. In 1964, the company started selling toy trucks, with the Hess logo on them, in Hess gas stations. The company has been selling them every since, bringing out new models just before Christmas. They have become quite collectible and the old ones can fetch a pretty penny.

19. Common mirage image : OASIS
The most famous oasis in the US is … Las Vegas, in the middle of the Mojave Desert.

20. Some McDonald’s burgers : QUARTER POUNDERS (QUARTERBACK)
The Quarter Pounder sandwich was created just down the road here, in a McDonald’s restaurant in Fremont, California. The franchise owner felt that there was a market for a hamburger with more meat in the bun, and so introduced a meat patty that weighed a quarter pound prior to cooking. He advertised the Quarter Pounder in his restaurant using the slogan, “Today Fremont, tomorrow the world”. Prophetic words …

29. It might make you go “Achoo!” : FLU
Influenza is an ailment that is caused by a virus. The virus is readily inactivated by the use of soap, so washing hands and surfaces is especially helpful in containing flu outbreaks.

31. January 1 for the Rose Bowl, e.g. : DATE
The Rose Bowl is the oldest of all the bowl games, and so has the nickname, “The Grandaddy of the Them All”. The first Rose Bowl game was played in 1902.

38. Part of a 2005 Harry Potter title : HALF-BLOOD PRINCE (HALFBACK)
“Harry Potter and the Half-Blood Prince” is the sixth in J. K. Rowling’s series of highly successful fantasy novels. When the book was released on the 16 July 2005, 9 million copies were sold in the first 24 hours!

42. Paris airport : ORLY
Orly is on the outskirts of Paris, to the south of the city. It is home of course to the Paris-Orly Airport, the second busiest international airport for the city, after the more recently built Charles de Gaulle Airport. Orly is still home to more domestic flights though.

44. Double-___ (oboe, e.g.) : REED
The oboe is perhaps my favorite of the reed instruments. The name “oboe” comes from the French “hautbois” which means “high wood”. When you hear an orchestra tuning before a performance, you’ll note (pun intended!) the oboe starts off the process by playing an “A”. The rest of the musicians in turn tune to that oboe’s “A”. Oh, and if you want to read a fun book (almost an “exposé”) about life playing the oboe, you might try “Mozart in the Jungle” by oboist Blair Tindall. I heard recently that HBO are working towards a pilot based on the book. I can’t wait to see it!

50. 1987 Stanley Kubrick classic : FULL METAL JACKET (FULLBACK)
Stanley Kubrick’s 1987 classic war film “Full Metal Jacket” takes its name from the “full metal jacket” bullet that is used by infantry riflemen. The film is set largely in Vietnam and, somewhat bizarrely I think, all those jungle scenes were shot on a disused building site in London!

59. Lightning-fast Bolt : USAIN
Usain Bolt is a Jamaican sprinter who in the 2008 Olympics won three gold medals. Back in Jamaica, Bolt was really into cricket and probably would have been a very successful fast bowler had he not hit the track instead.

60. Actor Morales : ESAI
Esai Morales is best known for his role in the 1987 movie “La Bamba”, which depicted the life of Ritchie Valens and his half-brother Bob Morales (played by Esai).

Down
1. N.B.A. nickname until 2011 : SHAQ
Shaquille O’Neal is one of the heaviest players ever to have played in the NBA (weighing in at around 325 pounds). Yep, he’s a big guy … 7 foot 1 inch. He is also the oldest player active in the NBA today, pushing 40 years old.

2. Llama land : PERU
Peru’s name comes from the word “Biru”. Back in the early 1500s, Biru was a ruler living near the Bay of San Miguel in Panama. The territory over which Biru ruled was the furthest land south in the Americas known to Europeans at that time. The Spanish conquistador Francisco Pizarro was the first European to move south of Biru’s empire, and the land that he found was designated “Peru”, a derivative of “Biru”.

4. Former Russian royal : TSAR
The term czar (also tsar) is a Slavic word, and was first used as a title by Simeon I of Bulgaria in 913 A.D. It is derived from the word Caesar, which was synonymous with emperor at that time.

8. Hawaiian port : HILO
Hilo is the largest settlement on the big island of Hawai’i, with a population of over 43,000 (that’s not very many!). Oh, I love the Big Island …

11. Area that may have stained-glass windows : APSE
The apse of a church or cathedral is a semicircular recess in an outer wall, usually with a half-dome as a roof, and often where there resides an altar. Originally, apses were used as burial places for the clergy and also for storage of important relics.

13. “Bonanza” brother : HOSS
Dan Blocker was the actor who played Hoss Cartright on the famous TV show “Bonanza”. Hoss was the “slow” character on the show, yet paradoxically, Dan Blocker was the most educated member of the cast having earned a Masters Degree in the dramatic arts. Sadly, Blocker passed away while “Bonanza” was still running. He was undergoing relatively routine gall bladder surgery, and developed a pulmonary embolism which killed him. Bonanza ran for just one more season after Blocker passed away.

27. Brawl : MELEE
“Melee” comes from the French word (“mêlée”), and in both languages it means a confused fight.

29. April 1 victims : FOOLS
April Fool’s Day is celebrated on April 1st in the western world. In the US (and Ireland) one can make practical jokes all day long if one wants. But in the UK there is a noon deadline. Anyone pranking after midday is called an “April Fool”.

30. ___ Gaga : LADY
I’ve seen Lady Gaga interviewed on television a few times, and she sure is “unique”. Her music is of course out of my league, but she does know how to put on a show.

34. 1941 chart-topper “Maria ___” : ELENA
“Maria Elena” is a Spanish song, written in 1932, with the English version becoming a 1941 hit for the Jimmy Dorsey orchestra. The song was dedicated to María Elena Portes Gil, the wife of the Mexican President in the late twenties.

NBC first aired a form of “Saturday Night Live” in 1975, under the title “NBC’s Saturday Night”. The show was actually created to give Johnny Carson some time off from “The Tonight Show”. Back then “The Tonight Show” had a weekend episode, and Carson convinced NBC to pull the Saturday or Sunday recordings off the air and hold them for subsequent weeknights in which Carson needed a break. NBC turned to Lorne Michaels and asked him to pull together a variety show to fill the vacant slot, and he came up with what we now call “Saturday Night Live”.

40. Mrs. Gorbachev : RAISA
Raisa Gorbachova was the wife of Soviet leader Mikhail Gorbachev. There’s no doubt that Raisa’s charm and personality helped her husband as he toiled to change the image of the Soviet Union.

48. Old Dodges : OMNIS
The Doge Omni was basically the same car as the Plymouth Horizon, and was produced by Chrysler from 1978-90. The Omni is a front-wheel drive hatchback, the first of a long line of front-wheel drive cars that was very successful for Chrysler. The Omni was actually developed in France, by Chrysler’s Simca division. When production was stopped in the US in 1990, the tooling was sold to an Indian company that continued production for the Asian market for several years.

49. Ecto- or proto- ending : PLASM
In the real world, ectoplasm is part of the cytoplasm of a cell. In the paranormal world, ectoplasm is that spiritual energy that some people claim to be able to see, that emanates from ghostly characters. It’s that ethereal shape that is sometimes seen in photographic images,  which can be interpreted as the energy of some spirit from “the other side”. Spooky stuff …

The word “protoplasm” comes from Greek, meaning first (protos) thing formed (plasma). It is the name given to the cell contents, everything that is surrounded by the plasma membrane. The protoplasm in most cells is divided into two parts, the cytoplasm which surrounds the nucleus, and the nucleoplasm found within the nucleus.

50. Elmer with a double-barreled shotgun : FUDD
Elmer Fudd is one of the most famous of all the Looney Tunes cartoon characters, the hapless nemesis of Bugs Bunny. If you have never seen it, check out Elmer and Bugs in the marvelous “Rabbit of Seville”, a short cartoon that parodies Rossini’s “Barber of Seville”. Wonderful stuff …

52. Actress Turner : LANA
Lana Turner started work as a Hollywood actress at a very young age, signing up with MGM at only sixteen. Early in her career she earned the nickname “The Sweater Girl” after wearing a pretty tight sweater in the film “They Won’t Forget”, her film debut. She married eight times, to seven different husbands, the first of which was bandleader Artie Shaw. Shaw and Turner eloped and married on their very first date, when the young actress was just nineteen years old. After divorcing Shaw she married restaurateur Joseph Crane, but had the marriage annulled when she found out that Crane was still married to his first wife. The two had a daughter together, and so remarried when Crane’s divorce was finalized. Cheryl Crane was the daughter from the marriage to Joseph, and she lived with Turner after her parents split up. When Cheryl was 14-years-old, her mother was romantically involved with a shady character named Johnny Stompanato. One evening Cheryl found her mother engaged in a violent argument with Stompanato, and Cheryl became so scared that she pulled out a gun and killed him in what was deemed to be justifiable homicide. Turner’s last marriage was to a nightclub hypnotist, Ronald Pellar, and that union lasted just six months as Pellar disappeared one day with a lot of Turner’s money and jewelry. Years later Turner said, “My goal was to have one husband and seven children, but it turned out to be the other way around.”

56. ___ Sutra : KAMA
Kama is the Hindu god of love. He is portrayed as a youth bearing a bow and arrows, much like Eros and Cupid.

The word “sutra” is used in Hinduism for a learned text, usually meant to be studied by students.

The Kama Sutra is renowned for its descriptions of positions that can be used for sexual intercourse, but the sutra includes many other texts that deal with various matters of a sexual nature including how to woo a woman, the conduct of a “chief wife”, the conduct of “other” wives, how to make money as a courtesan and much, much more, as if that isn’t enough …

57. Attorney General Holder : ERIC
Eric Holder is the Attorney General of the United States, and is the first African American to hold the position. Holder was close to President Obama during the presidential campaign. He was the campaign’s legal advisor, and was also one of the three members on the Obama vice-presidential selection committee, which of course opted for Vice-President Joe Biden.

For the sake of completion, here is a full listing of all the answers:
Across