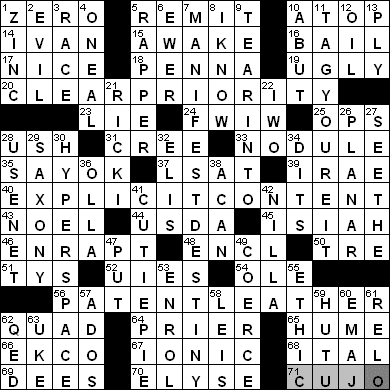 CROSSWORD SETTER: William I. Johnston
THEME: Unambiguous Beginnings … all the theme answers start with a synonym of “unambiguous” …

14. Tennis great Lendl : IVAN
Ivan Lendl is a former professional tennis player from Czechoslovakia. Lendl appeared in eight consecutive US Open finals in the eighties, a record that stands to this day.

17. Riviera city : NICE
The city of Nice lies on the Mediterranean coast of France, not far from the Italian border. Although it is only the fifth most populous city, it has the second busiest airport in the country (after Paris), a reflection of the vast number of jet-setting tourists that flock to Nice and environs.

18. Quaker State: Abbr. : PENNA
Today “Quaker State” is an unofficial name for Pennsylvania, as it is more correctly known as the Keystone State, and has been so since 1802. However, in colonial times Pennsylvania was known officially as the Quaker Province, recognizing the beliefs and doctrine of the state’s founder, William Penn.

24. Bit of cyberchat shorthand : FWIW
For What It’s Worth.

31. First Nations tribe : CREE
“First Nations” is a term used in Canada describing the ethnicity of Native Americans who are neither Inuit nor Métis people.

The Cree are one of the largest groups of Native Americans on the continent. In the US most of the Cree nation live in Montana on a reservation shared with the Ojibwe people. In Canada most of the Cree live in Manitoba.

39. “Dies ___” : IRAE
Dies Irae is Latin for “Day of Wrath”. It is the name of a famous melody in Gregorian Chant, and is often used as part of the Roman Catholic Requiem Mass.

43. Winter air : NOEL
Noel is the French word for the Christmas season, ultimately coming from the Latin word for “birth”, “natalis”. Noel has come to be used as an alternative name from a Christmas carol.

44. Food stamp? : USDA
The US Department of Agriculture dates back to 1862 when it was established by then-president Abraham Lincoln. Notably, Lincoln referred to the USDA as the “people’s department”, reflecting the agrarian basis of our economy back then.

45. Basketball Hall-of-Famer Thomas : ISIAH
Isiah Thomas played his whole professional basketball-playing career with the Detroit Pistons, and he is now the head coach with Florida International University’s Golden Panthers. When you’re out shopping for popcorn, keep an eye out for the Dale &Thomas brand, as it’s co-owned by Thomas.

51. Cobb and others : TYS
Ty Cobb was one of the richest baseball players of all times. When he retired he was a major stockholder of the Coca-Cola Corporation, and by the time he passed away in 1961 he had an even bigger investment in General Electric. He left an estate worth about $86m (in 2008 dollars).

56. Shiny shoe material : PATENT LEATHER
The traditional process that creates the shine on patent leather was developed in 1818 by Seth Boyden. He used a lacquer coating based on linseed oil. Most patent leather today has a plastic coating.

66. Kitchenware brand : EKCO
The EKCO name dates back to 1888 when Edward Katzinger founded his company in Chicago, to make baking pans. The acronym EKCO stands for “Edward Katzinger Co”.

67. Column order : IONIC
An Ionic column is relatively ornate. It usually has grooves running up and down its length and at the top there is a “scroll” design called a “volute”. The scroll design makes it a popular inclusion in academic buildings.

70. “Family Ties” mother : ELYSE
“Family Ties” was one of the first TV shows that I enjoyed when I arrived in the US back in 1983. I found the situation very appealing, with two ex-hippie parents facing off against an ultra-conservative son. The main characters in the show were Michael J. Fox as Alex, Meredith Baxter-Birney as Alex’s mom, Elyse, and Michael Gross as Alex’s Dad, Steven. But some future stars had recurring roles as well, including Courtney Cox as one of Alex’s girlfriends and Tom Hanks as Elyse’s young brother.

71. Rabid dog in a Stephen King story : CUJO
“Cujo” is a Stephen King horror novel, which means that I have never read it (I don’t do horror). The character Cujo is a rabid St. Bernard dog which besieges a young couple for three days in their stalled car. King tells us that he lifted the dog’s name from real life, as Cujo was the nickname of Willie Wolfe, one of the men responsible for the 1974 kidnapping of Patty Hearst by the Symbionese Liberation Army.

Down
1. 97.5% of a penny : ZINC
The official name of our smallest denomination coin is a “cent”, and our use of the word “penny” is just a colloquialism derived from the British coin of the same name. However, in the UK the plural of penny is “pence”, whereas we have “pennies” in our pockets.

4. Center of the N.B.A. : O’NEAL
Shaquille O’Neal is one of the heaviest players ever to have played in the NBA (weighing in at around 325 pounds). Yep, he’s a big guy … 7 foot 1 inch tall. He is also the oldest player active in the NBA today, around 40 years old.

7. Expansionist doctrine : MANIFEST DESTINY
Manifest Destiny was the belief expressed in the 19th century that the United States was “destined” to expand right across North America, from the Atlantic to the Pacific.

21. Lake of “Hairspray” : RICKI
Ricki Lake is perhaps as well known for her “Ricki Lake” talk show, as she is for playing Tracy Turnblad in the 1988 movie “Hairspray”.

22. Pacific battle site, familiarly : IWO
Iwo Jima today is an uninhabited volcanic island located south of Tokyo, Japan. There were about a thousand Japanese civilians living on the island prior to WWII. In 1944, there was a massive influx of military personnel in anticipation of the inevitable US invasion. As the Japanese military moved in, the civilians were forced out, and no one has lived there ever since.

28. Online newsgroup system : USENET
Remember the good old days, when you read messages online in “newsgroups”? Well, that system of aggregating public messages is known as Usenet, and it’s still around today. Usenet started operating in 1980, some ten years before the World Wide Web was introduced (which system has displaced Usenet in terms of popularity). Usenet definitely played a significant part in the history of the Internet. For instance, the terms “FAQ” and “spam” were both born on Usenet.

29. Leipzig’s state : SAXONY
Saxony was the name given at different times in history to states along the Elbe river in central Europe. As the various states broke up, they spawned many duchies that retained the name “Saxe”, the most famous probably being Saxe-Coburg and Gothe, two united duchies in Germany that ceased to exist after WWII. A notable branch of the Saxe-Coburg and Gothe House is the British Royal Family, as Queen Victoria was married to Prince Albert of Saxe-Coburg and Gothe. King George V changed the name of the family to the House of Windsor in a politically pragmatic move during WWI.

30. Four-dimensional realm : HYPERSPACE
“Hyperspace” is a term used to describe space that has four dimensions, and not just three (i.e. length, breadth and height, plus one). The idea makes my head hurt …

32. Skull and Bones members : ELIS
Skull and Bones is a secret society at Yale University, founded in 1832. The society is well funded, and even owns a 40-acre island in Upstate New York that members and alumni use as a retreat. Noted members of Skull and Bones included William F. Buckley, Jr. and Senator John Kerry.

Samuel Morse was a very accomplished painter with quite a reputation (he painted a portrait of President John Adams, for example). In 1825 he was in Washington working on a commissioned painting when he received a one-line letter by horse messenger telling him that his wife was ill. He left immediately for his home in New Haven, Connecticut, but by the time he arrived she had already died and had been buried. This single event spurred him to move from painting to the development of a rapid means of long distance communication, leading to the single-wire telegraph and Morse code.

36. Ceramic vessel : OLLA
An olla is a traditional clay pot used for the making of stews.

42. Nabisco wafer : NILLA
As one might expect, Nilla is a shortened from of “vanilla”. However, you won’t find any vanilla in Nilla cookies or wafers. They always been flavored with vanillin, synthetic vanilla. Is nothing sacred …?

47. Wall Street option : PUT
A “put option” is the name given to a contract in which the buyer of the put has the option to sell something at a future date should it’s market price fall to a predetermined level. The seller of the put is obliged to purchase the security at that price.

58. Island rings : LEIS
“Lei” is the Hawaiian word for “garland, wreath”, although in more general terms a “lei” is any series of objects strung together as an adornment intended to be worn.

59. Rwandan group : HUTU
The Tutsi are the second largest population of people in Rwanda, with the Hutu being the largest group. The bloody conflict that has existed between the Tutsi and Hutu peoples dates back to about 1880 when Catholic missionaries arrived in the region. The missionaries found that they had more success converting the Hutus than the Tutsi, and when the Germans occupied the area during WWI they confiscated Tutsi land and gave it to Hutu tribes in order to reward religious conversion. This injustice fuels the fighting to this very day.

60. Key of Bach’s second violin concerto: Abbr. : E-MAJ
Like so many of the great composers, the extent of Bach’s contribution to the repertoire wasn’t fully recognized until long after his passing. Johann Sebastian Bach was undoubtedly the greatest composer of the Baroque period, and is ranked by many as the greatest classical composer of all time.

Johann Sebastian Bach raised a very musical family. He had four sons who became famous musicians in their own right. They were:

62. Letters seen during proofreading? : QED
Q.E.D. is used at the end of a mathematical proof or a philosophical argument. The acronym stands for the Latin “quod erat demonstrandum” meaning “that which was to be demonstrated”.

63. Island strings : UKE
The ukulele originated in the 1800s, and mimicked a small guitar brought to the Hawaiian Islands by Portuguese immigrants.