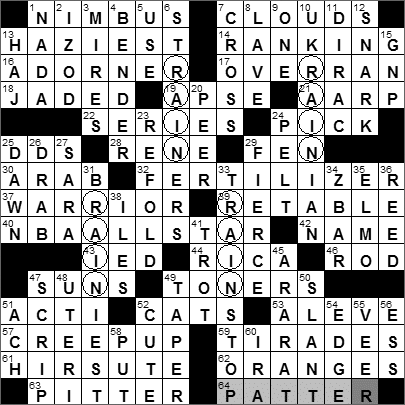 CROSSWORD SETTER: E. J. Masicampo
THEME: It’s Raining … the circled letters spell out the word RAIN, and form “raindrops” raining down from NIMBUS CLOUDS at the top of the grid and going PITTER PATTER when they hit the bottom of the grid.
COMPLETION TIME: 7m 05s
ANSWERS I MISSED: 0

1. With 7-Across, sources of the circled words : NIMBUS
7. See 1-Across : CLOUDS
Nimbus clouds are rain clouds, and in fact, “nimbus” is the latin word for “cloud”. Some other types of cloud can take on the prefix nimbo- or suffix -nimbus, indicating that they are similar to that other cloud type but carry precipitation. So, a stratus cloud that has rain is called nimbostratus, and cumulus cloud with rain is called cumulonimbus.

18. Having a “Ho-hum, I’ve seen that already” attitude : JADED
Our term “jaded”, meaning tired and feeling a little “ho-hum”, comes from the noun “jade” which in the 14th century was an old, worn-out horse.

19. Church recess : APSE
The apse of a church or cathedral is a semicircular recess in an outer wall, usually with a half-dome as a roof, and often where there resides an altar. Originally, apses were used as burial places for the clergy and also for storage of important relics.

21. 50+ org. : AARP
AARP is the official name now for the interest group that used to be called the American Association of Retired Persons. The name change reflects the current focus of the group on all Americans aged 50 or over, as opposed to just people who have retired.

22. “The Office” or “House” : SERIES
“The Office” is set in a branch of a paper company in Scranton, Pennsylvania. If you haven’t seen the original UK version, starring Ricky Gervais, I do recommend you check it out. Having said that, the US cast has taken the show to a whole new level. Great television …

I think that “House” is one of the best shows on Fox television. It is fun for me to see English actor Hugh Laurie in the title role as coming from the other side of the Atlantic I have been watching him in various comedic roles for decades. Famously he played Bertie Wooster opposite Stephen Fry in P.G. Wodehouse’s “Jeeves & Wooster”, as well as one of the bumbling “bad guys” in “101 Dalmatians” (the version starring Glen Close).

25. One whose work is filling?: Abbr. : DDS
Doctor of Dental Surgery.

28. Painter Magritte : RENE
Belgian artist Rene Magritte was a surrealist. His most recognized work maybe is “The Son of Man”, a painting he created as a self-portrait. It is the work that shows a man in a bowler hat with his face covered by an apple. The image features prominently in the great movie, the 1999 remake of “The Thomas Crown Affair”.

30. Part of U.A.E. : ARAB
The United Arab Emirates (UAE) is a federation of seven emirates (states) in the Middle East. Included in the seven are Abu Dhabi and Dubai, with the city of Abu Dhabi being the UAE capital and cultural center.

37. Golden State athlete : WARRIOR
The Golden State Warriors are our local NBA franchise out here in the San Francisco Bay Area, based in Oakland, California. The team was founded in 1946 as the Philadelphia Warriors, becoming the San Francisco Warriors when they moved to City by the Bay in 1962. They changed named again (to Golden State) when they relocated to the other side of the Bay to Oakland in 1971. The state-wide name reflected the fact that the team played some of their 1971-72 season games in San Diego, so were “California’s” team.

39. Postpone again : RETABLE
These “tabling” and “shelving” idioms drive me crazy, because it is always misused. If a topic is shelved, it is set aside. If a topic is tabled, it is brought “off the shelf” and put “on the table” for discussion. But, maybe it’s just me …

43. Roadside bomb, for short : IED
Sadly, having spent much of my life in the border areas between southern and Northern Ireland, I am all too familiar with Improvised Explosive Devices, and their devastating effect. No matter what one’s politics, one has to admire the guts of soldiers who spend their careers defusing (or attempting to defuse) such devices in order to save the lives and property of others. Of course these days IEDs are very much in the news in Iraq and Afghanistan.

49. Photocopying supplies : TONERS
The key features of a laser printer (or copier) are that it uses plain paper and produces quality text at high speed. Laser printers work by projecting a laser image of the printed page onto a rotating drum that is coated with photoconductors (material that becomes conductive when exposed to light). The areas of the drum exposed to the laser carries a different charge than the unexposed areas. Dry ink (called toner) sticks to the unexposed areas due to electrostatic charge. The toner is then transferred to paper by contact and is fused into it by the application of heat. So, that explains why paper coming out of a laser printer is warm, and sometimes powdery …

51. When Caesar is told to beware : ACT I
In Act I of William Shakespeare’s “Julius Caesar” a soothsayer warns the doomed emperor to “beware the Ides of March”. Caesar ignores the prophesy and is of course killed on the steps of the Capitol by a group of conspirators on that very day.

Advil is Wyeth’s brand of ibuprofen, an anti-inflammatory.

Down
1. Zippo : NADA
“Nada” is the Spanish word for “nothing”. “De nada” translates literally from the Spanish as “of nothing”, and is used to mean “you’re welcome” or “don’t mention it”. The French have the same expression “de rien”, also translating to “of nothing” and used the same way.

The use of the word “zip” to mean “nothing” dates back to the early 1900s when it was student slang for being graded zero on a test.

2. Polo alternative : IZOD
Jack Izod was a tailor of some repute over in England, producing shirts for King George V as well as other members of the Royal Family. As he was about to retire, he was approached for the use of his name by an American clothing manufacturer based in New York. The brand Izod of London was introduced to America in 1938.

Ralph Lauren is an American fashion designer, born Ralph Liftshitz in the Bronx, New York. Lauren started off working as a salesman for Brooks Brothers after spending two years in the US Army. He then opened a necktie store, featuring his own tie designs. The ties were sold under the name “Polo”, which became Lauren’s most famous brand.

4. Drinking spree : BENDER
Both jag and bender describe periods of unrestrained activity, particularly involving alcohol. Both words have been in use since the 1800s.

9. Washington bill : ONE
George Washington didn’t appear on the first one-dollar bill. Instead, the bills printed from 1862 to 1869 featured Salmon P. Chase, the Secretary of the Treasury who served under Abraham Lincoln.

10. Like the Chernobyl nuclear power plant : UKRAINIAN
The Chernobyl disaster took place in 1986 in the Ukrainian SSR (now independent Ukraine). A sudden power outage during a system test caused a series of explosions and a resulting fire that sent highly radioactive smoke into the atmosphere. The fallout drifted westward from the Ukrainian SSR with most of it landing in Belarus. Over 350,000 people had to be permanently relocated out of the contaminated areas.

11. 1933 Physics Nobelist Paul : DIRAC
Paul Dirac was an English theoretical physicist, and a co-winner of the Nobel Prize for Physics in 1933. It was Dirac who predicted the existence of anti-matter. What would the Starship Enterprise have done without anti-matter?

12. Lewis Carroll creature : SNARK
Lewis Carroll was actually a pseudonym, for English author Charles Lutwidge Dodgson. His most famous novels are of course “Alice’s Adventures in Wonderland” and “Alice Through the Looking Glass”, and his most famous poems are the two nonsense pieces “Jabberwocky” and “The Hunting of the Snark”.

13. Leon Uris novel, with “The” : HAJ
“The Haj” is a novel by the very successful American author Leon Uris. It is set in Palestine in first half of the 20th century.

15. Econ. figure : GNP
A country’s Gross National Product (GNP) is the value of all services and products produced by its residents in a particular year. GNP includes all production wherever it is in the world, as long as the business is owned by residents of the country concerned. Gross Domestic Product (GDP) is different, and is the value of all services and goods produced within the borders of the country for that year.

27. “___ Smile,” first hit for Hall & Oates : SARA
Daryl Hall & John Oates are a pop music duo, most successful in the late seventies and early eighties. They had six number one hits, including the 1982 release “Maneater”.

31. Like the class valedictorian, perhaps : BRAINIEST
A valediction is an act of taking one’s leave, from the Latin “vale dicere”, to say farewell. An example of a valediction would be the words “yours truly” at the end of a letter. And of course, the valedictorian (here in the US anyway) is the student in a graduating class that is chosen to say the final words at the graduation ceremony, a farewell to the classmates.

35. Patron saint of sailors : ELMO
St. Elmo is the patron saint of sailors. He lends his name to the electrostatic weather phenomenon (often seen at sea) known as St. Elmo’s fire. The “fire” is actually a plasma discharge caused by air ionizing at the end of a pointed object (like the mast of a ship), often observed during electrical storms.

38. Réunion and others : ILES
Réunion is a French island in the Indian Ocean, located east of Madagascar. As the island is a department of France, and has the same status as French domestic departments, it is actually part of the European Union.

45. Biblical landfall : ARARAT
Mount Ararat is in Turkey. Ararat is a snow-capped dormant volcano, with two peaks. The higher of the two, Greater Ararat, is the tallest peak in the country. Ararat takes its name from a legendary Armenian hero called Ara the Beautiful (or Ara the Handsome).

47. Money substitute : SCRIP
Scrip isn’t legal tender, but operates just like currency in specific applications. It is in effect a form of credit. Originally the word “scrip” was used for a certificate giving one the right to receive something, often shares of a stock. “Scrip” is probably short for (sub)script(ion) receipt.

51. Essen exclamation : ACH
The exclamation “ach!” is usually translated into English as “oh!”

I knew a man back in Ireland, a German national from the city of Essen. He had very sad tales to tell from the days of WWII. As a young boy he lost his (socialist) parents during the Nazi purges early in the war. In 1943, he was living with his grandmother and still attending school when he was drafted into the army along with the rest of his class (at 14 years old, he told me). His platoon leader was his old school teacher who made a point of tutoring the boys in place of military drilling. One day, he was on guard duty with his class/platoon at the dam above the city, and along come the Dam Busters, with their bouncing bombs. The raid was successful (from the perspective of the Allies), but he described terrible famine faced by the people below the dam due to flooding of the farmland that surrounded the factories.

60. $$$ set aside for later years : IRA
I have to tell you, when I first came to the US from Ireland, it was pretty confusing seeing big signs along the freeway advocating IRA contributions. Back in Ireland, that was pretty illegal (where IRA stands for the outlawed Irish Republican Army!).