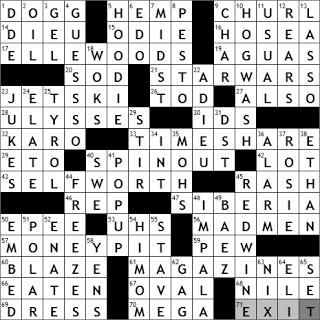 CROSSWORD SETTER: Ian Livengood
THEME: MAGAZINES … each of the theme answers starts with the name of a magazine:

1. Rapper Snoop ___ : DOGG
The rap star Snoop Dogg’s real name is Cordozar Calvin Broadus. He is the most famous protege of the notorious rapper Dr. Dre. Sadly, Snoop Dogg has had numerous run ins with police all round the world, even after he started to live the good life that came with his fame.

9. Rude sort : CHURL
A churl is rude, boorish person. The word “churl” comes from the Old English word “ceorl”, meaning a freeman of the lowest class.

14. “___ et mon droit” (British monarch’s motto) : DIEU
“Dieu et mon droit” is motto of the British monarch, and can be seen on a scroll beneath the coat of arms of the United Kingdom. The words translate from French into “God and my right”, which can be interpreted more easily as “God and my right shall defend me”. Supposedly, the motto was first adopted by King Henry V in the 1400s, and was a password used by King Richard I in 1198 at the Battle of Gisors. The motto is in French probably because French was the language of the Royal Court for so many years.

15. Pooch in a Jim Davis cartoon : ODIE
Odie is Garfield’s best friend, and a slobbery beagle.

16. Book between Daniel and Joel : HOSEA
Hosea is one of the Twelve Prophets of the Hebrew Bible, also called the Minor Prophets of the Old Testament in the Christian Bible.

17. Reese Witherspoon’s role in “Legally Blonde” : ELLE WOODS
Reese is not actually Ms. Witherspoon’s given name. She started out life as Laura Jeanne Witherspoon. Reese is her mother’s maiden name.

“Elle” magazine was founded in 1945 and today has the biggest circulation of any fashion magazine in the world. “Elle” is the French word for “she”.

21. Highest-grossing film of 1977 : STAR WARS
“Star” is a tabloid magazine (although the publishers say it isn’t) specializing in celebrity gossip. It was founded in 1974 by Rupert Murdoch and is intended as a competitor to “National Enquirer”. Here’s a fun feature: “Knifestyles of the Rich and Famous”, which focuses on before-and-after photos of celebrities who have undergone plastic surgery. Something to read while checking out at the grocery store …

23. Lakeside vacation rental : JET SKI
“Jet Ski” is actually a brand name, owned by Kawasaki Heavy Industries of Japan. The generic term, not often used, is “personal watercraft”. Most people use the term “Jet Ski” generically, although “WaveRunner” is also popular. But that’s another brand name, owned by Yamaha.

“Jet” magazine has been on the newsstands since 1951 and is targeted towards the African American community. It is noted for its in-depth coverage of events related to the Civil Rights movement.

26. Browning who directed “Dracula,” 1931 : TOD
Tod Browning was an actor, director and screenwriter noted for his collaborations with Lon Chaney. His most famous work as a director is “Dracula” from 1931, starring Béla Lugosi in the title role.

28. 1922 novel with a Dublin backdrop : ULYSSES
Regular readers will know that I am unashamedly supportive of my native Irish culture, but I have to tell you that I can’t handle the works of James Joyce, although I have spent many a fine day traipsing around Ireland learning about his life. To me, his life is more absorbing than his writing. Having said that, “Ulysses” is an interesting novel in that it chronicles just one, ordinary day in the life of a Dubliner, Leopold Bloom. There’s a huge celebration of the novel in Dublin every year on June 16th, called Bloomsday. The festivities vary from readings and performances of the storyline, to pub crawls.

33. Purchase for a vacation, maybe : TIMESHARE
“Time” is the biggest-selling weekly, news magazine in the world, although newsstand sales are declining as more and more of its readership moves online. When it was first published in 1923, by Briton Hadden and Henry Luce, it was the first weekly news magazine in the country.

39. 1-Down’s W.W. II command : ETO
(1. 39-Across commander : DDE)
Dwight D. Eisenhower was in command of the European Theater of Operations during WWII. If you’re a WWII buff like me, then I recommend you take a look at a great made-for-TV movie starring Tom Selleck as Eisenhower called “Ike: Countdown to D-Day

40. Lose control of a car : SPIN OUT
“Spin” is a music magazine founded in 1985 by Bob Guccione Jr., the eldest son of “Penthouse” founder Bob Guccione.

43. Personal esteem : SELF-WORTH
“Self” is a magazine for women, focused on health, beauty and happiness. “Self” has been around since 1979, and apparently business is booming.

47. Neighbor of Irkutsk on a Risk board : SIBERIA
Risk is fabulous board game, first sold in France in 1957. It was invented by a very successful French director of short films called Albert Lamorisse.  He called his new game “La Conquete du Monde”, which translates into English as “The Conquest of the World”. A game of Risk is a must during holidays in our house …

56. Emmy-winning AMC series set in the 1960s : MAD MEN
If you haven’t seen the AMC show “Mad Men” then I urge you to go buy the first season on DVD

and allow yourself to get addicted. It is a great series set in the sixties, telling all that goes on in and around the advertising business on Madison Avenue in New York City. It brings you right back to the days of three-martini lunches, office affairs, and chain-smoking of cigarettes. Great stuff …

“Mad” magazine has been around since 1952, although back then it was more of a comic book than a magazine.

57. House that drains finances, slangily : MONEY PIT
“Money” magazine is a sister publication of “Time”, and focuses on personal finance.

61. What the starts of the answers to the eight italicized clues are : MAGAZINES
The word “magazine” was originally used to denote a place for storing goods, particularly military arms and ammunition. This usage dates back to the late 1500s. The first use of “magazine” in the sense of a periodical or journal dates back to 1731, with the publication of “Gentleman’s Magazine”. “Magazine” had come to mean a printed list of military stores, and the idea was that the new periodical was to be a “storehouse” of information.

68. Setting for an Agatha Christie mystery : NILE
Agatha Christie wrote a very successful crime novel called “Death on the Nile” that was first published in 1937. That novel had started off life as a play, which was was never performed, one that Christie called “Moon on the Nile”. Christie then adapted the novel back into a play again calling it “Murder on the Nile”, which opened in London in 1946.

6. Tokyo, once : EDO
Edo is the former name of the Japanese capital city of Tokyo. Edo was the seat of the Tokugawa shogunate, a feudal regime that ruled from 1603 until 1868.

8. Pasta topper : PESTO
Pesto gets its name from the Latin word for “crush”. The word “pestle”, as in mortar and pestle, is derived from the same Latin root.

10. “Nonsense!” : HOGWASH
Hogwash was originally the name of the swill fed to pigs.

18. Rice holders : WOKS
Wok is a Cantonese word, the name of the frying pan now used in many Asian cuisines.

23. Diner fixtures, informally : JUKES
Although coin-operated music players had been around for decades, the term “juke box” wasn’t used until about 1940. The term derives from a Gullah word, the language of African Americans living in the coastal areas of South Carolina and Georgia. In Gullah, a “juke joint”, from “juke” or “joog” meaning “rowdy, wicked”, was an informal establishment where African Americans would gather and for some music, dancing, gambling and drinking. The coin-operated music players became known as “juke boxes”.

25. Snowy region of Austria : TYROL
The Austrian state of Tyrol has to be one of the most beautiful places in the world, especially if you love the mountains. It is in the very west of the country, just south of Bavaria in Germany. The capital city is the famous Innsbruck.

31. “Spring forward” to this: Abbr. : DST
On the other side of the Atlantic, Daylight Saving Time (DST) is known as “summer time”. The idea behind summer/daylight-savings is to move clocks forward an hour in spring and backwards in the fall, so that afternoons have more daylight.

35. ___ scale : MOHS
The Mohs scale of mineral hardness was developed in 1812 by Freidrich Mohs. Basically he took minerals and scratched them with other minerals. In this way he was able to determine which minerals were hardest (most scratch resistant) and which softest.

37. Perez with a nasally voice : ROSIE
Rosie Perez is an American actress born in New York City of Puerto Rican descent. As well as pursuing her acting career, Perez is an activist promoting Peurto Rican rights, and was arrested in 2000 at a rally to protest US Navy weapons-training off the coast of Puerto Rica.

38. Patriot Allen : ETHAN
Ethan Allen was one of the founders of the state of Vermont. He was also a hero in the American Revolutionary War, famous for leading (along with Benedict Arnold) the small band of men that captured Fort Ticonderoga. And yes, the Ethan Allan store and furniture line is named for Ethan Allen the patriot.

40. Eur. country with a king : SWE
The country of Sweden emerged during the Middle Ages, and became one of the great powers of Europe in the days of the Swedish Empire in 17th and early 18th century. Since then Sweden’s influence has waned. What was the eastern part of Sweden was lost to Russia in the early 1800s, and is now modern-day Finland. In the 20th century Sweden has adopted a very non-aggressive stance and was neutral in both World Wars.

45. Port, for one : RED WINE
The city of Oporto in Portugal gave its name to port wine in the late 1600s, as it was the seaport through which most of the fortified wine was exported.

49. Woodstock folk singer : BAEZ
Joan Baez is an American folk singer, and a prominent activist in the fields of nonviolence, civil rights, human rights and environmental protection. She’s dated some high-profile figures in her life, including Bob Dylan, Steve Jobs and Mickey Hart of the Grateful Dead.

55. Avert, with “off” : STAVE
The word “stave” was originally the plural of “staff”, a wooden rod. To “stave off” originated with the concept of holding off with a staff.

58. Strong desires : YENS
The word “yen”, meaning “urge”, has been around in English since the very early 1900s. It comes from the earlier word “yin” imported from Chinese, which was used in English to describe an intense craving for opium!

63. Quash : NIX
The use of nix as a verb, meaning “to shoot down” dates back to the early 1900s. Before that it was just the noun, meaning “nothing”. This comes from the German “nichts”, which also means “nothing”.

64. Roth of “Inglourious Basterds” : ELI
Eli Roth is one of a group of directors of horror movies known quite graphically as “The Splat Pack”. I can’t stand “splat” movies and avoid them as best I can. Roth is also famous for playing Donny Donowitz in the Quentin Tarantino movie “Inglourious Basterds”, a good film I thought, if you close your eyes during the gruesome bits.