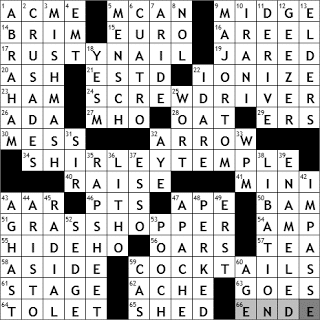 THEME: COCKTAILS … all of the theme answers are the names of famous cocktails i.e.

Today’s Wiki-est, Amazonian Googlies
Across
1. Top point : ACME
The “acme” is the highest point coming from the Greek “akme”, which has the same meaning.

5. Thom ___ footwear : MCAN
Thom McAn footwear was introduced in 1922 by the Melville Corporation (now CVS Caremark). The brand was named after a Scottish golfer, Thomas McCann. The brand is epitomized by the comfortable, leather casual and dress shoe, so sales have really been hurt in recent decades by the growing popularity of sneakers.

9. Barbie the doll’s best friend : MIDGE
Midge Hadley was doll created to as the best friend of Mattel’s famed “Barbie”. Midge was introduced as a “more wholesome” character in order to counteract criticism that Barbie was “too sexy” for young girls.

15. Continental money : EURO
The European Union today stands at a membership of 27 states. The Euro is the official currency of only 16 of those 27 states. The list of states not using the Euro includes the UK, Denmark, Sweden and Norway.

17. Something found in an old board, maybe : RUSTY NAIL
A Rusty Nail is a mixture of Drambuie and Scotch, usually served over ice. Without the ice the drink is sometimes called a Straight Up Nail. There is also a Canadian version of a Rusty Nail that uses rye whiskey instead of Scotch that’s called a Donald Sutherland after the celebrated Canadian actor.

19. ___ Fogle, spokesman for Subway : JARED
Jared Fogle is “The Subway Guy”, spokesman for the chain of fast-food sandwich restaurants. Fogle decided himself to use Subway sandwiches as the basis for a weight loss diet, and did indeed lose a lot of weight prompting a friend to write an article about Fogle and his diet in a student paper. The story was brought to Subway management, and they chose to use Fogle in an advertising campaign. Since the start of the campaign ten years ago, Subway sales have doubled.

23. Show-off in a show : HAM
The word “ham”, describing a performer who overacts, is apparently a shortened form of “hamfatter” and dates back to the late 1800s. “Hamfatter” comes from a song in old minstrel shows called “The Ham-Fat Man”. It seems that a poorly performing actor was being compared to the “acting” qualities of a minstrel done up in black-face.

26. Toothpaste tube letters : ADA
The American Dental Association is the largest and oldest national dental association in the world. Today it is based in Chicago, but the association was founded in Niagara Falls, New York in 1859. The ADA started out as a group of 26 dentists, and it now has more than 152,000 members.

29. Triage sites, briefly : ERS
“Triage” is the process of prioritizing patients for treatment, especially on a battlefield. The term “triage” is French and means “a sorting”.

34. Little girl in 1935’s “Our Little Girl” : SHIRLEY TEMPLE
The original drink called a Shirley Temple was made with two parts ginger ale, one part orange juice and a dash of grenadine. The contemporary drink is much simpler, a mix of 7up (or equivalent) with grenadine. A variant of the non-alcoholic original that includes some form of booze is often called a “Dirty Shirley”.

43. Swiss river to the Rhine : AAR
The Aar (also called the Aare in German) is a major river in Switzerland. A famous spot along the river is The Reichenbach Falls in the center of the country, actually a series of waterfalls near the city of Meiringen. The falls are celebrated in the world of literature as it was here that Sherlock Holmes fell to his supposed doom with his nemesis, Professor Moriarty (in “The Adventure of the Final Problem”).

50. “Batman” sound effect : BAM
Batman is unique among his superhero compatriots in that he has no special powers, just a whole load of cool gadgets.

51. Term of endearment for the Karate Kid : GRASSHOPPER
I don’t think this clue is correct. The term “grasshopper” was used for the student in the TV series “Kung Fu”, not the movie “The Karate Kid”.

A grasshopper cocktail is usually served martini-style, and is a mix of equal parts (green) crème de menthe, crème de cacoa and cream. I just found a corny joke about the drink, that I think is worth repeating:

54. Speaker’s place : AMP
An electric guitar, for example, needs an amplifier to take the weak signal created by the vibration of the strings and turn it into a signal powerful enough for a loudspeaker.

55. Cab Calloway’s signature line : HI DE HO
Cab Calloway was a famous jazz singer and band leader who enjoyed most of his fame in the thirties and forties. His best known recording was the song “Minnie the Moocher” which had a chorus that used the “words” “hi de hi” and “hi de ho”. Calloway became so associated with the song he earned the nickname “The Hi De Ho Man”.

57. Kind of party for Glenn Beck? : TEA
Glenn Beck ss a political commentator who leans to the right, and so is a big star on the Fox News Channel. He has a had a rough life. His parents divorced, and his mother committed suicide by jumping out of a small boat in Puget Sound. Glenn Beck himself got divorced from his first wife, with her leaving him due to his struggles with substance abuse. He is now married for a second time, and living the quiet life in Connecticut.

59. What 17-, 24-, 34- and 51-Across are : COCKTAILS
The word “cocktail” has been used in English since the very early 1800s. The exact etymology of the term isn’t very clear, but the favored story is that it comes from the French word “coquetier”, the word for an “egg cup”. Apparently an apothecary in New Orleans was fond of holding social gatherings in his pharmacy and offered to his guests brandy mixed with his own recipe for bitters, using egg cups to serve the “cocktail”.

1. Presidential first name that comes from Genesis : ABRAHAM
President Abraham Lincoln was born in 1809 in Kentucky. The young Lincoln was given no middle name, and “Abraham” was chosen in honor of his paternal grandfather. Grandfather Abraham Lincoln was a captain in the militia during the American Revolution, and one of the pioneers who settled what is now the state of Kentucky.

2. Holy wars : CRUSADES
The Crusades were a whole series of military campaigns that took place between 1095 and 1291 in the Near East. The Crusades were fought by mainly Roman Catholic forces from the Holy Roman Empire attempting to wrest control of the region from Muslim rule.

5. Good Joe : MENSCH
Mensch is yet another word that comes to us via Yiddish, ultimately derived from the German “mensch” meaning “human being”. We use the term to mean someone of integrity and honor.

8. Cambodia’s Lon ___ : NOL
Lon Nol was a soldier and politician in Cambodia, later serving twice as the country’s president. When the Khmer Rouge took over Cambodia in 1975, Nol escaped the country to Indonesia. He eventually found a home in Fullerton, California, where he died in 1985.

In early 1969, the struggling David Bowie recorded a promotional film in an attempt to reach a wider audience. The film called “Love You Till Tuesday” featured seven of Bowie’s songs in what amounted to an extended music video, with one of the tracks being “Space Oddity”. Somebody smart put two and two together later in the year and decided that a fresh version of “Space Oddity” should be released, to coincide with the Apollo moon landings. Sure enough, the BBC snagged the track for their coverage of the landings and gave Bowie huge audiences. And the song still gets an awful lot of air time on the small screen.

10. Farsi speaker : IRANI
“Farsi” is one of the local names for Persian, an Iranian language.

25. St. John’s ___ (herbal remedy) : WORT
St. John’s wort is a herb that is used by some as a treatment for depression. Extracts are available as over-the-counter purchases here in the US, but back in my homeland of Ireland, one needs a prescription.

36. Certain print, for short : LITHO
Lithography is a printing technique that was invented in 1796 as a cheap way to publish theatrical works. In the litho process the image is drawn on a metal plate, although originally it was drawn on a stone (hence the prefix “litho-“). The image is drawn in such a way that some regions of the plate repel ink, then when paper is applied to the plate, those areas are ink-free.

37. “Put a tiger in your tank” brand : ESSO
The brand name Esso has its roots in the old Standard Oil company, as it uses the initial letters of Standard and Oil (ESS-O). The Esso brand was replaced by Exxon in the US but it is still used in many other countries.

38. Drink : LIBATION
Back in the 14th century “libation” was the pouring of wine in the honor of a god. The term comes from the Latin word “libare”, basically meaning the same thing. Nowadays we tend to use libation as a somewhat ornate word for a drink.

42. Standoff : IMPASSE
Impasse is a French word for a blind alley or an impassable road.

45. Goodyear offering : RADIAL
The Goodyear tire company was founded in 1898. The company was named for Charles Goodyear, the man who invented vulcanized rubber in 1839, even though Goodyear had no connection with the company.

47. Military helicopter : APACHE
The 4-bladed Apache helicopter was introduced in 1975 as a replacement for the 2-bladed Cobra.