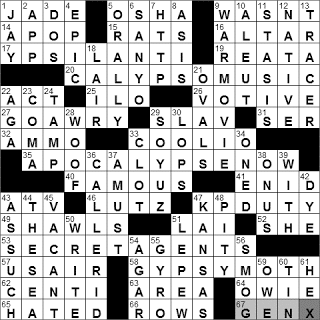 Across
5. Workplace watchdog, for short : OSHA
The Occupational Safety and Health Administration was created in 1970 during the Nixon administration. OSHA regulates workplaces, but only in the private sector, the one exception being the US Postal Service.

15. Mrs. Frisby’s charges in “The Secret of NIMH” : RATS
“The Secret of NIMH” is the 1982 screen adaptation of a book written by Robert C. O’Brien. The novel’s title is “Mrs. Frisby and the Rats of NIMH”. “Mrs. Frisby” doesn’t actually appear in the movie version, at least not under the same name. In the film her character is called Mrs. “Brisby”, with the name change being made due to concerns about a potential trademark dispute with “Frisbee” discs.

17. Home of Eastern Michigan University : YPSILANTI
The city of Ypsilanti, Michigan is named for a hero in the Greek War of Independence, Demetrius Ypsilanti. Among its claims to fame, Ypsilanti was the home to the original Dominic’s pizza store.

Eastern Michigan University was founded in 1849 in Ypsilanti, Michigan. It’s original name was Michigan State Normal School, and it was the first normal school founded outside of the original 13 colonies (a normal school was a teacher-training school i.e. a school that established teaching standards or “norms”).

20. Harry Belafonte’s specialty : CALYPSO MUSIC
The musical style of calypso originated in Trinidad and Tobago, but there seems to be some debate about which influences were most important in developing the genre. It is generally agreed that the music was imported by African slaves from their homeland, but others emphasize influences of the medieval French troubadours. To me it sounds more African in nature. The popularity of calypso  took off when it was first recorded in 1912, and it spread around the world in the thirties and forties. It reached its pinnacle with the release of the famous “Banana Boat Song” by Harry Belafonte.

22. “___ natural” : ACT
This one took me a while, as I still have trouble using adjectives as adverbs. I’d say “act naturally“.

25. U.N. workers’ grp. : ILO
The ILO (International Labour Organization) is now an agency administered by the UN, but it was established by the League of Nations after WWI. The ILO deals with important issues such as health and safety, discrimination, child labor and forced labor. The organization was recognized for its work in 1969 when it was awarded the Nobel Peace Prize.

29. Pole, for one : SLAV
The Slavic peoples are found in the majority in communities that cover over half of Europe. This large ethnic group is traditionally broken down into three smaller groups:

31. It might precede a collection: Abbr. : SER
In church, there might be a sermon followed by a collection.

33. Rapper parodied by Weird Al Yankovic in “Amish Paradise” : COOLIO
Coolio is the stage name of rapper Artis Leon Ivey, Jr. In 2009, Coolio joined fellow-American Le Toya Jackson as one of the house guests in “Celebrity Big Brother” (UK version) and apparently he created quite a stir on the show with some outrageous comments. But he also showed a softer side with a spontaneous, emotional reaction to the election of Barack Obama to the office of US President, as he watched the election results coming in live in the Big Brother house.

35. 1979 film with Capt. Willard and Col. Kurtz : APOCALYPSE NOW
The epic war drama “Apocalypse Now” was released in 1979 and starred Martin Sheen as Captain Willard and Marlon Brando as Colonel Kurtz. The premise of the film is that both Willard and Kurtz are special ops officers, with Willard sent into the jungle to assassinate Kurtz who has “gone rogue”. The film is notorious for the trouble that director Francis Ford Coppola had completing the shoot. Brando turned up on set grossly overweight (as a special ops guy!), and Martin Sheen had a heart attack during filming.

46. Skating maneuver : LUTZ
In figure skating, a Lutz is a toe-pick-assisted jump that one starts skating backwards and ends skating backwards (there’s more to it that I don’t really understand!). The maneuver is named after Alois Lutz, an Austrian skater who first performed it in competition way back in 1913. Lutz wowed the crowd with a single jump, but today both men and women are landing triple Lutz jumps. No one has landed a clean quadruple Lutz in competition.

47. P.F.C.’s punishment : KP DUTY
KP is a US military slang term, and stands for either “kitchen police” or “kitchen patrol”.

51. My ___, Vietnam : LAI
The My Lai Massacre took place in the Vietnamese village of My Lai in March, 1968. After an investigation it was determined that at least 347 unarmed civilians, mostly women, children and elderly people, were murdered by a unit of US soldiers. It was also revealed that gang rapes and torture took place during the massacre. At least three servicemen tried to halt the killing, but they were outnumbered by those participating. About two years after the massacre, 26 men were charged with crimes, but only one man was convicted, William Calley. Calley was found guilty of murder and sentenced to life imprisonment and hard labor. President Nixon stepped in the day after Calley was sentenced and ordered him transferred from Leavenworth prison and placed under house arrest pending appeal. On appeal the life sentence was reduced to 20 years, and this was further reduced to 10 years as an act of clemency by the Secretary of the Army. He was released after serving three years in total.

57. Onetime TWA competitor : US AIR
Trans World Airlines was a big carrier in the US, but was perhaps even more recognized for its extensive presence in Europe and the Middle East. For many years, especially after the collapse of Pan-Am, TWA was considered the unofficial flag carrier for the US. The company started in 1930, the product of a forced merger of Transcontinental Air Transport and Western Air Express. The Transcontinental and Western Air (the original TWA) that resulted was what the Postmaster General wanted, a bigger airline to which the Postal Service could award airmail contracts.

58. Leaf-eating insect scourge : GYPSY MOTH
Gypsy moths were brought to the US from Eurasia in 1868 by one Leopold Touvelot, a French scientist who lived in Massachusetts. He was trying to make a hybrid, silk-spinning caterpillar that was resistant to disease. However, some of the moths escaped from his lab, and today the gypsy moth is one of the most prevalent and destructive pests of hardwood trees in the eastern US.

67. Post-baby boomer group, for short : GEN X
The term Generation X originated in the UK, the name of a book by Jane Deverson. Her book detailed the results of her study of British youths in 1964, contrasting their lifestyle to those of previous generations. It was  Canadian author Douglas Coupland who was responsible for popularizing the term, with his more successful publication “Generation X: Tales for an Accelerated Culture”. By the latest accepted definition, Gen Xers were born between 1961 and 1981.

1. Homer Simpson’s middle name : JAY
“The Simpsons” is one of the most successful programs produced by the Fox Broadcasting Company. Homer Simpson’s catchphrase is “D’oh”, such a famous exclamation nowadays that it has been included in the OED since 2001.

2. iPad download, in brief : APP
Apple’s iPad is a tablet computer, meaning that the whole computer is contained in a flat, touchscreen device, with input being made by using one’s fingers on the screen or by using a stylus. It looks very cool, but it’s still a bit too pricey for me for what you get ($600 – $900).

Just in case you aren’t aware, “http” are the first letters in most Internet links (just look up at the address of this blog in the address bar above). Oh, and it stands for HyperText Transfer Protocol.

22. Turkish title : AGA
An aga, or agha, is a title that was used by both civil and military officials in the Ottoman Empire.

24. Pack (down) : TAMP
“Tamp” means to pack down tightly by tapping. “Tamp” was originally used to specifically describe the action of packing down sand or dirt around an explosive prior to detonation.

29. Russian space program started in the 1960s : SOYUZ
The Russian Soyuz space program started in the early sixties as part of a plan to land a cosmonaut on the moon. Soyuz was focused on two pieces of hardware, the Soyuz rocket (the expendable launch vehicle), and the Soyuz spacecraft itself . The Soyuz program is alive and well, and derivatives of those early designs from the sixties are regularly visiting the International Space Station. “Soyuz” is a Russian word meaning “union”.

33. Medical condition treated by thrombolysis : CLOT
Thrombolysis is also called “clot busting” for obvious reasons. The technique involves the introduction of an enzyme into the bloodstream that acts on the clot to render it soluble in blood plasma.

36. Screening aid : CALLER ID
The basic technology behind caller ID was developed in Athens, Greece by “Ted” Paraskevakos in the late sixties and early seventies. The man should be made a saint …

44. Title location in a Hemingway novel : THE SEA
If you’ve read Ernest Hemingway’s “The Old Man and the Sea” (probably first at school, like me) you’ll likely remember it as a quick read as it is a novella, although it might be better described as a “long short story”. It was first published in 1952, the last major work that Hemingway had published in his lifetime. That first publication was as a story in “Life Magazine”, and it was such a hit that the magazine sold 5 million copies in the first two days. “The Old Man and the Sea” won a Pulitzer in 1952, and two years later the title was cited when Hemingway was awarded the Nobel Prize for Literature in 1954.

47. Where Manhattan is : KANSAS
Manhattan, Kansas is the fourth largest city in the state and is known as a college town, home to Kansas State University. The original settlement that grew to be Manhattan was known as Boston back in the mid-1800s when settlers from the Cincinnati-Manhattan Company of Ohio landed (actually, they ran aground!) in the area. The settlers agreed to stay in Boston provided the settlement was renamed to Manhattan, a conditon that was readily agreed to. In 1977 Manhattan was officially given the nickname of “The Little Apple”, for obvious reasons.

51. Cartoon stinker : LE PEW
Pepé Le Pew is a very likable cartoon character from the Looney Tunes and Merrie Melodies series. Pepé is a French skunk, first introduced way back in 1945, and he is someone always thinking of “l’amour”.

54. Food thickener : AGAR
Agar is a jelly extracted from seaweed, with many uses. It is found in Japanese desserts, and can be used as a laxative or as a food thickener, and it is the most common medium used for growing bacteria in Petri dishes.

55. Greek deli specialty : GYRO
A gyro is a traditional Greek dish, a sandwich made with pita bread containing meat, tomato, onion and tzatziki, a yogurt and cucumber sauce. The meat for gyros is usually roasted on a tall vertical spit, and is sliced from the spit as required.

56. Urban woe : SMOG
“Smog” is of course a portmanteau word, formed by melding “smoke” and “fog”. The word was first used to describe the air around London in the early 1900s.

61. Do voodoo on : HEX
“Hexen” is a German word meaning “to practice witchcraft”. The use of the word “hex” in English started with the Pennsylvania Dutch in the early 1800s.