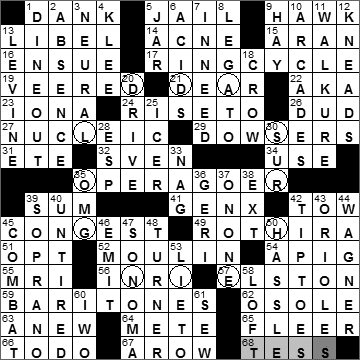 THEME: WAGNER’S RING CYCLE … all the theme answers relate to the epic opera, and opera in general. The RING of letters in the middle of the grid spell out DAS REINGOLD, the first opera in the RING CYCLE.
COMPLETION TIME: 11m 14s
ANSWERS I MISSED: 0

Across
1. Like many a cellar : DANK
“Dank” is such a lovely word, now largely superseded by another nice word “damp”. It is thought that “dank” came in to English from Scandinavia, some time before the 14th century. The modern Swedish word “dank” means “moist place”.

” is somewhat of a cult film now, released in 1995. The cast is amazing, including Gabriel Byrne, Bernicio Del Toro, Kevin Pollak and Kevin Spacey. The title comes from one of the most memorable lines in movie history, from the film “Casablanca”. The Claude Rains character, Major Renault, pronounces, “Major Strasser has been shot. Round up the usual suspects.”

9. Peddle : HAWK
The verb “to hawk” has a Germanic origin, from the Low German word “hoken” meaning “to peddle”. A hawker is actually slightly different from a peddler by definition, as a hawker is a peddler that uses a horse and cart, or a van nowadays perhaps, to sell his or her wares.

13. Suit material? : LIBEL
What clever wording for a clue! The word “libel” meaning a published or written statement likely to harm a person’s reputation, comes into English from the Latin “libellus”, a small book. Back in the 1500s “libel” was just a formal written statement, with the more damaging meaning arising in the 1600s.

are a group of three islands located at the mouth of Galway Bay in the west of Ireland. They are beautiful, but desolate places, and one of the few places in Ireland where the main language spoken is Irish, as opposed to English. If you’ve seen the television comedy “Father Ted”, you’ll be familiar with the landscape, as man of the external shots are from the one of the Aran Islands, Inishmore.

22. Letters between a name and a nickname : AKA
Also Known As …

23. Hebrides isle : IONA
Although the small island of Iona lies just off the west coast of Scotland, it was the site of a monastery built in the Middle Ages by the Irish monk, Colm Cille (also known as Columba). Colm Cille and his followers were sent into exile from the Irish mainland, and settled in Iona, which at that time was part of one of the Irish kingdoms. This monastery in Iona expanded it’s influence over the decades, founding other institutions all over Ireland and Great Britain. It is believed that the famous Book of Kells

, now housed in Trinity College, Dublin, may have been written or at least started, at the monastery on Iona.

27. With 6-Down, genetic carriers : NUCLEIC
6. See 27-Across : ACIDS
The two most common nucleic acids are deoxyribonucleic acid (DNA) and ribonucleic acid (RNA), both of which play crucial roles in genetics. The DNA contains the genetic instructions used to keep living organisms functioning, and RNA is used to transcribe that information from the DNA to protein “generators” called ribosomes.

29. Divining rods : DOWSERS
Dowsing is the practice of divining for not just water, but also buried metals and gemstones for example. Often a dowser will use a Y-shaped or L-shaped rod

as a tool, which can also be called a dowser.

The Somme is a department in the very north of France, in the Picardie region. It is famous for the devastating battles of WWI.

32. ___ Kramer, 2010 Dutch Olympic gold medalist in speed skating : SVEN
Sven Kramer is a famous, Dutch long track speed skater, the holder of the world record time for the 5,000 meter, 10,000 meter, and the team pursuit. Kramer won the 5,000 meter gold medal in the 2010 Vancouver Olympic games, and although he finished first in the 10,000 meters, he was disqualified for failing to make a required lane change. He wasn’t happy …

41. Boomers’ kids : GEN X
The term Generation X originated in the UK, the name of a book by Jane Deverson. Her book detailed the results of her study of British youth in 1964, contrasting their lifestyle to those of previous generations. However, Canadian author Douglas Coupland was responsible for the popularizing the term, with his more successful publication “Generation X: Tales for an Accelerated Culture”. By the latest accepted definition, Gen Xers were born from 1961 to 1981.

52. ___ Rouge : MOULIN
The Moulin Rouge cabaret is located squarely in one of the red light districts of Paris, the district of Pigalle. You can’t miss it, as it has a huge red windmill on its rook (the French for “red windmill” is “moulin rouge”). The Moulin Rouge opened its doors in 1889, and soon after, the working girls of the cabaret adopted a “respectable” party dance and used it to entice their clients, and the can-can was born. Nowadays, the Moulin Rouge is home to a lavish, Las Vegas-style show that cost millions of euros to stage. It features showgirls, dancers, acrobats, a whole host of entertainers in fact. And I am sure the can-can features as well …

55. Hosp. test in a tube : MRI
A CT Scan produces (via computer manipulation) a three dimensional image of the inside of an object, usually the human body. It does so by taking a series of two dimensional x-ray images while rotating the camera around the patient. The issue with CT Scans is that they use x-rays, and high doses on radiation can be harmful, and is cumulative. An MRI on the other hand (Magnetic Resonance Imaging) uses powerful magnetic fields to generate its images, so there is no exposure to ionizing radiation (like X-rays). We used MRI technology in our chemistry labs at school, back in the days when the technology was called Nuclear Magnetic Resonance Imaging. Apparently the marketing folks didn’t like the term “nuclear” because of its association with ionizing radiation and bombs, so it’s now called just MRI.

56. Letters on a crucifix : INRI
The letters on the cross on which Jesus died were INRI. INRI is an acronym, for the Latin “Iesus Nazarenus, Rex Iudaeorum”, which translates into English as Jesus the Nazarene (or Galilean), King of the Jews (or Judeans).

59. Singing voices in the 17-Across : BARITONES
The baritone is the most common male singing voice, and lies between a bass and a tenor.

62. “___ Mio” : ‘O SOLE
“‘O sole mio” is a famous Italian song from Naples, written in 1898. The lyrics are usually sung in the original Neapolitan, as opposed to Italian. The title translates from Neapolitan into “My Sun” (and not into “O, My Sun”). It’s a love song of course, sung by a young man declaring that there is another sun, brighter than that in the sky, the one upon his lover’s face.

Down
3. Kind of network : NEURAL
It used to be that a neural network was just the name given to a network nerve cells in an organism. In the modern world, the term “neural net”, short for neural network, also applies to virtual or electronic devices set up to mimic the function of the human brain, and in particular learning from past experiences.

8. Smooth and connected : LEGATO
A curved line called a slur is used to connect notes that should be played legato i.e. smoothly, without a noticeable break between the notes.

9. Mudder’s fodder : HAY
A mudder is a racehorse, one that runs well on a wet or muddy track.

arcade game was first released in Japan in 1980, and is as popular today as it ever was. The game features characters that are maneuvered around the screen to eat up dots and earn points. The name comes from the Japanese folk hero “Paku”, known for his appetite.

11. “Die ___” (second part of the 17-Across) : WALKURE
“Die Walkure” is the second of the four operas in Richard Wagner’s “Ring Cycle”. It is known in English commonly as “The Valkyrie”, and the most famous part of the opera is the exciting, driving section called “The Ride of the Valkyries”.

13. Met maestro James, longtime conductor of the 17-Across : LEVINE
James Levine is the music director of the Metropolitan Opera and Boston Symphony Orchestra. Since starting with the Met in 1971, Levine has conducted thousands of Met performances. He is also well known in Europe where he makes many guest appearances conducting with the elite European organizations.

30. Big ___ : SUR
Big Sur is lovely part of the California Coast, south of Monterrey and Carmel. The name “Big Sur” comes from the original Spanish description of the area as “el sur grande” meaning “the big south”.

33. Kvetch : NAG
The word “kvetch” of course comes to us from Yiddish, with “kvetshn” meaning “to complain” or “squeeze”.

36. Spice Girl Halliwell : GERI
Geri Halliwell was called Ginger Spice because of her red hair when she was with the Spice Girls. However, as she was quite a bit older than the rest of the group, she was less charitably sometimes referred to as “Old Spice”.

38. No. after a no. : EXT
The extension number comes after the phone number.

39. Singing voice in the 17-Across : SOPRANO
A soprano is the highest singing voice, so is a female voice. There is a term “boy soprano”, but the more correct name for such the voice of pre-adolescent boy is “treble”.

43. Birds with hanging nests : ORIOLES
The colorful oriole has a very special nesting structure. It looks like a deep pouch, hanging from a branch like a hammock.

44. Composer of the 17-Across : WAGNER
Richard Wagner

was a German composer, probably most famous in the musical world for his dramatic operas. During his life, Wagner was a controversial character, noted for having an abrasive personality always ready to offer his opinion. Today, his antisemitic writings are probably the most questioned aspect of his character.

47. County next to Napa : SONOMA
Did you know that there are far more wine grapes produced in Sonoma County than Napa Valley? Within Sonoma County some of the more well-known appellations are Chalk Hill, Anderson Valley and Russian River Valley (my own personal favorite for winery tours in the area, way less crowded and more fun than Napa Valley).

was favorably compared to Lana Turner with her deep voice, especially after her sultry performance in the 1981 movie “Body Heat”. Turner continued to command leading roles through the eighties but her career hit a roadblock in the early nineties when she was diagnosed with rheumatoid arthritis and found herself in constant pain. She turned to alcohol, which along with the medication for her disease altered her appearance dramatically. Thankfully, the disease is now in remission, and Turner has been seen more and more on the stage and screen in the last decade.

60. W.W. II site, briefly : IWO
Iwo Jima today is an uninhabited volcanic island located south of Tokyo, Japan. There were about a thousand Japanese civilians living in the island prior to WWII. In 1944, there was a massive influx of military personnel in anticipation of the inevitable US invasion. When the military moved in, the civilians were forced out, and no one has lived there ever since.