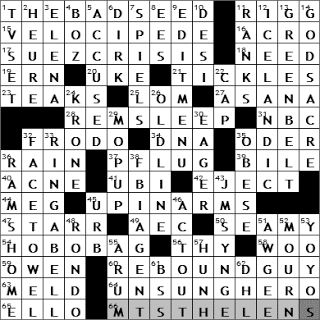 THEME: None
COMPLETION TIME: N/A (watching the excellent “Saving Private Ryan” on DVD)
ANSWERS I MISSED: Too many (all in the southeast)!

” was based on a tremendously successful novel by William March., nominated for the 1955 National Book Award. Sadly, March didn’t get to see the success of his last work, as he died one month after its publication.

11. Bond girl opposite Lazenby : RIGG
Unfortunately, the most capable actress to play a Bond girl, Diana Rigg, was teamed with the absolute worst choice as James Bond, George Lazenby. The movie was “On Her Majesty’s Secret Service”, the first film made after Sean Connery quit the role.

15. Victorian conveyance : VELOCIPEDE
A velocipede is any wheeled-vehicle powered just by human energy (like our modern-day bicycle).

had a long and distinguished military career (including command of Israeli forces during the 1956 Suez Crisis), and played a pivotal, and militarily active, role as Minister for Defense during the Six-Day War of 1967. He was a very recognizable figure with a black patch over his left eye. He was fighting for the Allies in Vichy French Lebanon during WWII and was using a pair of binoculars that was hit by an enemy bullet smashing metal and glass fragments into his eye.

player in Hawaii might be wearing a lei around his or her neck.

The ukulele originated in the 1800s, and mimicked a small guitar brought to the Hawaiian Islands by Portuguese immigrants.

25. Player of Clouseau’s superior : LOM
Herbert Lom is a Czech film actor, best known for playing Chief Inspector Charles Dreyfus in the series of “Pink Panther” movies. He was born in Prague in 1917, and had his first film role in a Czech film. He moved to England in 1939, and made many appearances in British movies. He also worked for many years in Hollywood, and played the King of Siam in the original London production of “The King and I”.

27. Yoga posture : ASANA
Asana is a Sanskrit word literally meaning “sitting down”. The asanas are the poses that a practitioner of yoga assumes. The most famous is the lotus position, the cross-legged pose, or padmasana.

28. A catnap may not provide it : REM SLEEP
REM is an acronym standing for Rapid Eye Movement sleep. REM sleep takes up 20-25% of the sleeping hours, and is the period associated with one’s most vivid dreams.

” was a crime series on NBC TV, famously starring Rock Hudson as San Francisco police commissioner McMillan, and Susan Saint James as his wife. Towards the end of the run, Susan Saint James had a contract dispute with the producers, so her character was killed off, and THE show was renamed “McMillan”.

32. Protagonist bound for Mordor : FRODO
Frodo Baggins is a principal character in J. R. R. Tolkien’s “The Lord of the Rings”. Frodo is a hobbit, and was charged with the quest of destroying Sauron’s Ring in the fires of Mount Doom.

34. Basis of many positive IDs : DNA
Forensic scientists use DNA, usually taken from blood, semen, skin, saliva or hair follicles. Often DNA left at a crime scene can be used to identify a perpetrator of a crime, in a process called genetic fingerprinting.

35. The Warta’s outlet : ODER
The Warta is the third longest river in Poland. The Warta river basin was at the heart of original Poland, when the Slavic tribe called the Polans inhabited the basin from the 8th century.

The Oder rises in the Czech Republic, and forms just over a hundred miles of the border between Germany and Poland, before eventually emptying into the Baltic Sea.

39. Ancient humor : BILE
Greek and Roman physicians ascribed to the theory that the body had four basic substances, the so-called four humors. All diseases were caused by these four substances getting out of balance. The four humors were:

Clearly, some of those ancient terms have found their way into modern medicine.

” is of course a novel written by American author Louisa May Alcott. The quartet of little women is, eldest first, Meg, Jo, Beth and Amy. The tomboy, Jo, is the main character in the story, and is based on Alcott herself.

47. Whitewater navigator? : STARR
Ken Starr has to be one of the most famous lawyers in recent history, due to his tenure as Independent Counsel when President Bill Clinton was in office. His original appointment was to investigate the suicide of White House Counsel Vince Foster. He was also charged with continuing the investigation of the Whitewater controversy in which then-Governor Clinton was accused of applying pressure to arrange an illegal loan to one of his partners in the Whitewater land deal. Famously, Starr’s purview was extended to include an investigation into President’s Clinton’s extra-marital affair with Monica Lewinsky to determine if the President has lied under oath. We don’t hear too much about Ken Starr anymore, but he is currently the President of Baylor University in Waco, Texas.

49. Post-Manhattan Project org. : AEC
The Atomic Energy Commission was set up right after WWII in 1946, with the aim of promoting the peaceful use of atomic energy. It was a significant move made by President Truman, as it passed control of atomic energy from the military to the civilian sector. The AEC continued to operate until 1974 when its functions were divided up into two new agencies, the Energy Research and Development Administration and the Nuclear Regulatory Commission.

50. Hardly wholesome : SEAMY
We’ve used “seamy” to mean “the least pleasant, the worst” since the 1600s. The idea comes from the seamed side of a sewn garment being the less attractive.

is rather unstructured-looking, a crescent-shaped bag with a long strap and soft sides that tends to slump when set down. It’s called a hobo bag because the shape resembles that of the bundle carried by archetypal hobos on the ends of sticks resting on their shoulders.

58. Try one’s suit on? : WOO
“Suit” is the act of courting a woman, and comes via Anglo-Norman from the Latin word for “to follow”.

59. Film critic Gleiberman : OWEN
Owen Gleiberman is a film critic for the magazine “Entertainment Weekly”. You can also hear him on National Public Radio for whom he reviews movies too. His favorite movie from the past decade is
2002’s “Far from Heaven” starring Julianne Moore and Dennis Quaid, one I haven’t seen yet!

65. East End greeting : ‘ELLO
Even though I am really an Irishman, I was actually born in the East End of London, so I used to talk like Michael Caine. “Not a lot of people know that!”

66. High point of 1980 news : MT. ST. HELENS
Only two volcanoes in the Cascade range have erupted in the 20th century, Mount St. Helens

” stars Keri Russell in the title role of Felicity Porter, and ran from 1998 to 2002. One of Felicity’s classmates is Elena Tyler, played by Tangi Miller. I am afraid I have never seen this one …

4. Name attached to some 1836 “Sketches” : BOZ
Charles Dickens used the pen-name Boz early in his career. He had already established himself as the most famous novelist of the Victorian Era when he came to visit America in 1842. He was honored by 3,000 of New York’s elite at a “Boz Ball” in the Park Theater.

” is the Scots word for dagger, and is the name given to a knife that is worn hanging from a belt in traditional dress that includes a kilt. The dagger worn in the sock isn’t a dirk (as is supposed by many) but rather is called a “sgian dubh”, “a black or hidden knife”.

7. What barkers bark : SPIELS
A spiel is a lengthy speech or argument designed to persuade, perhaps a sales pitch. “Spiel” comes to us from German, either directly (“spiel” is the German for “play”) or via the Yiddish “shpil”.

10. First name in ’50s comedy : DESI
Desi Arnaz was of course famous for his turbulent marriage to Lucille Ball. Desi Arnaz was from Cuba, and from a privileged family. His father was mayor of Santiago and served in the Cuban House of Representatives. However, the family had to flee to Miami after the 1933 revolution led by Batista.

13. What may encircle a rising chopper? : GREEN BELT
A rising star in the world of karate (a “chopper”) might be skillful enough to wear a green belt, no doubt working towards his or her black belt.

24. Coin with the monogram of King Harald V : KRONE
King Harald V is the current king of Norway, and has been on the throne since 1991 when his father passed away, King Olav V. You know how incestuous things are in the European Royal houses, so King Harald V of Norway is in the line of succession for the throne of England (albeit around no. 60).

35. Struggling with middle management? : OBESE
I love cleverly worded clues. Have you noticed?

43. Playwright who co-founded the Abbey Theatre : J. M. SYNGE
The Abbey Theatre is the National Theatre of Ireland, located in Dublin. I’m proud to say that the Abbey was the first theater in the world to be subsidized by the people (via the state), receiving funds from the government starting back in 1925. The Irish National Theater was founded in 1903 by a group of luminaries, including J. M. Synge and W. B. Yeats.

45. L.A.-based music magazine : URB
The magazine “URB” takes its name from its focus on music and urban lifestyle. “Urb” is in trouble though, and had to stop publishing a print edition in 2009. The focus these days is on URB.com.

48. Many a Beethoven work : RONDO
A rondo was often chosen by composers for the last movement of a sonata (or symphony or concerto, for that matter). In rondo form there is a principal theme that alternates with a contrasting theme(s), with the original theme anchoring the whole piece in between secondary digressions.

52. Emulate Electra : MOURN
Electra was a princess in Greek mythology, the daughter of Agamemnon. Electra had to mourn the death of her father who was murdered, and then the death of her mother, Clytemnestra, who was also murdered.


To yo-yo is move back and forth. Yo-yo is also a slang term for someone who is unreliable and a bit “nutso”.

Would you believe that the first yo-yos

date back to 500 BC? There is even an ancient Greek vase painting that shows a young man playing with a yo-yo. Centuries later Filipinos were using yo-yos as hunting tools in the 1500s. The word yo-yo is a Tagalog (Filipino) word meaning “come-come” or simply “return”.

is a perennial plant native to eastern North America. It’s a nasty plant though, and contains oxalic acid, a compound that can be very painful if ingested and even cause death if taken in sufficient quantities.

57. “What the …?” : HUNH
Although it’s new to me, “hunh” is an interjection used to ask a question (sort of like “huh?”). “Hunh” can also express anger, imitating a snorting sound.

62. FedEx rival : DHL
Back in the sixties, Larry Hillblom was making pocket money as a Berkeley law student by doing courier runs between San Francisco and Los Angeles. After law school, he decided to parlay his experience into his own business, and set up a courier service flying bills of lading ahead of freight from San Francisco to Honolulu. Hillblom brought in two buddies, Adrian Dalsey and Robert Lynn as partners, and the three were soon hopping on and off commercial flights, gradually making more and more money. And DHL was born … D (Dalsey) H (Hillblom) L (Lynn).