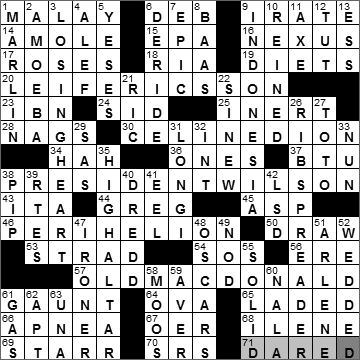 Across
1. Dweller on an Asian peninsula : MALAY
The Malay Peninsula is that long, thin land mass that forms the southern-most part of the Asian mainland. On the peninsula are the countries of Malaysia, Thailand, Burma (Myanmar) and Singapore (an island nation off the southern tip of the peninsula). People of the Malay ethnic group are mainly found on the Malay peninsula.

6. Ballgoer, for short : DEB
Deb is short for “débutante”, a French word meaning “female beginner”, a young lady making her “debut”. Traditionally the term was reserved for young women of aristocratic families who were newly introduced to society, and who were available for marriage. The male equivalent of a débutante is a “beau”, also a French word.

15. Org. doing atmospheric tests : EPA
The Environmental Protection Agency was set up during the Nixon administration, and began operation at the end of 1970.

16. Meeting point : NEXUS
The word nexus comes from the past participle of the Latin verb “nectere” meaning to bind. As such, a nexus is a connection, a link.

17. Gifts for divas : ROSES
“Diva” comes to us form Latin, via Italian. “Diva” is the feminine form of “divus” meaning “divine one”. It is used in Italy to mean goddess, or fine lady, and especially is applied to the prima donna in an opera. We often use the term to describe a singer with a big ego.

18. Shoreline indentation : RIA
A ria is actually a drowned river valley. It is formed where the sea level has raised, and the sea has flooded a valley. As a result, a ria can be confused with a fjord. A fjord is also a drowned valley, but that valley was originally formed by glaciation and not by river erosion.

was a Norse explorer, was the first European to land in North America, some 500 years before Christopher Columbus’s landing in 1492. Eiriksson built a small settlement called Leifsbudir, which archaeologists believe they have found in modern day Newfoundland, at L’Anse aux Meadows. The settlement discovered in Newfoundland is definitely Norse, but there is some dispute over whether it is actually Eiriksson’s Leifsbudir.

24. Punk rocker ___ Vicious : SID
Sid Vicious was a famous English musician, the best-known member of the seventies punk rock group, the Sex Pistols. In 1978, Vicious woke up out of a drugged stupor in his hotel room in New York, to find his girlfriend stabbed to death in the bathroom. Vicious was charged with the murder, and ten days later sliced his wrist in a suicide attempt. Vicious made bail a few months later and at a celebratory party, his mother supplied him with heroin, on which Vicious overdosed and died, at the age of 21.

” : CELINE DION
French-Canadienne singer Celine Dion first came to international attention when she won the 1988 Eurovision Song Contest, representing Switzerland in the competition that was hosted in Dublin, Ireland.

37. 1,055 joules: Abbr. : BTU
In the world of heating, ventilation and air conditioning, the power of a heating or cooling unit can be measured in British Thermal Units. This dated unit of energy is basically the amount of energy required to heat a pound of water so that the water’s temperature increases by one degree Fahrenheit.

The 1919 Treaty of Versailles ended the war between Germany and the Allied Powers, and was the most significant treaty signed at the end of WWI. The war itself ended in November of 1918, but it took six months of negotiations at a peace conference in Paris to hammer out a peace treaty. The treaty called for reparations to paid by Germany to the Allies, an amount so heavy that it could have taken Germany until the 1980s to settle the debt in full. As it turned out, the agreement was not honored consistently by Germany, and when Adolf Hitler came to power, reparation payments were halted altogether.

45. Cleopatra held it close : ASP
The asp is a venomous snake found in the Nile region of Africa. It was so venomous that it was used in ancient Egypt and Greece as a means of execution. Cleopatra observed such executions noting that the venom brought on sleepiness without and painful spasms. When opted to commit suicide, the asp was therefore her chosen method.

46. *Point in a planet’s orbit that’s closest to the sun : PERIHELION
In the celestial world, the apogee (or apsis) is the point in an orbit when the orbiting body is at its greatest, or least, distance from it’s center of orbit. The furthest and closest points of orbit is known as the apogee and perigee, when talking about bodies orbiting the Earth. The furthest and closest points for bodies orbiting the sun are known as the aphelion and perihelion.

53. Expensive violin, for short : STRAD
Generations of the Stradivari family produced violins, the most famous of which were constructed by Antonio Stradivari.

is a brand name of scouring pads made from steel wool impregnated with soap. The product was invented as a giveaway by an aluminum pot salesman in San Francisco called Ed Cox. His wife gave it the name “S.O.S” as an acronym for “Save Our Saucepans”. Note the punctuation! There is no period after the last S, and that is deliberate. When Cox went to register the trademark, he found that S.O.S. could not be a trademark because it was used as an international distress signal. So, he dropped the period, and I hope made a lot of money for himself and his wife.

“, was an English poet active in the early 1800s. He was equally as famous for his poetry as he was for the wild excesses in his personal life. He lived much of his life outside of England, and fought for revolutionaries in both Italy and Greece, and indeed died from a fever contracted while fighting against the Ottomans in Greece.

57. Subject of a children’s song associated with the vowels in the answer to each starred clue : OLD MACDONALD
There was an American version of the children’s song “Old MacDonald Had a Farm” that was around in the days of WWI. The first line of the US version goes “Old Macdougal had a farm, in Ohio-i-o”.

66. Sleep disorder : APNEA
Sleep apnea can be caused by an obstruction in the airways, possible due to obesity or enlarged tonsils.

67. “___ the ramparts …” : O’ER
The words “o’er the rampart we watched” come from “The Star Spangled Banner” written by Francis Scott Key. The lyrics were written first as a poem by Key, inspired by his witnessing of the bombarding by the British of the American forces at Fort McHenry during the Battle of Baltimore in September 1814. The words were then set to the tune of a popular British drinking song written by John Stafford Smith called “The Anacreontic Song”, with Anacreontic Society being a men’s club in London.

69. Brenda of comics : STARR
“Brenda Starr” is a comic strip created by Dale Messick. The strip is somewhat unique in the world of syndicated comics, in that it was created by a woman, and has been drawn by women ever since Messick retired in 1980. The storyline features Brenda Starr who lives through exciting and exotic adventures and romances.

Down
2. It multiplies by dividing : AMOEBA
An ameba (or “amoeba” as we spell it back in Ireland) is a single-celled microorganism. The name comes from the Greek “amoibe”, meaning change. The name is quite apt, as the cell changes shape readily as the ameba moves, eats or reproduces.

4. Beth preceder : ALEF
Alef is the first letter of the Hebrew alphabet, and beth the second.

8. Sounds heard by 57-Across : BAAS
Old MacDonald heard a BAA BAA here and a BAA BAA there …

11. Tool used by Hansel and Gretel’s father : AXE
Hansel and Gretel is a Germanic fairy tale found in the collection of the Brothers Grimm. It tells of two siblings, Hansel and Gretel, the children of a woodcutter, who are abandoned in a forest at the behest of an evil stepmother. Clever Hansel hears of the plan, and leaves a trail of pebbles so that he and his sister can find their way home. But, the children are abandoned again, and this time leave a trail of breadcrumbs. Unfortunately, the crumbs are eaten by birds, so the children do indeed become lost. But, eventually, they all live happily ever after …

12. King ___ : TUT
King Tut is a name commonly used for the Egyptian pharaoh Tutankhamen. Tutankhamen may not have been the most significant of the pharaohs, but he is the most famous. This is largely because of the discovery of his nearly intact tomb in 1922

. Prior to this, Egyptian tombs had routinely been ravaged by grave robbers. The magnificent burial mask is one of the most recognizable of all Egyptian artifacts.

13. What’s extracted from soil to get oil? : ESS
What a great clue … extract the S from the front of the word s-oil, and you get “oil”.

21. Singer Ocasek of the Cars : RIC
Ric Ocasek is an American musician of Czech heritage, and was the lead vocalist of the rock band, the Cars.

27. Kansas canine : TOTO
In “The Wizard of Oz” Toto is played by a terrier, but in the books by L. Frank Baum, Toto was just described as “a little black dog, with long, silky hair and small black eyes that twinkled merrily on either side of his funny, wee nose”.

29. Carrier with a hub in Copenhagen : SAS
SAS, formerly known as Scandinavian Airlines System, is the flag carrier of three countries: Denmark, Norway and Sweden.

33. Carmelite, for one : NUN
The full name of the Carmelite religious order of the Catholic church is the Order of the Brothers of Our Lady of Mount Carmel. It is thought that the order was founded on Mt. Carmel in northern Israel in the 12th century, giving the name.

38. Any singer with Gladys Knight : PIP
Gladys Knight & the Pips were performing together from 1953 to 1989. The group was founded around Gladys Knight, originally featuring her brother, sister and two cousins. The group took its name from yet another cousin, called “Pip”.

” starring Sylvester Stallone in the title role, was loosely based on the comic book character of the same name. Judge Dredd may be an American hero from the future in an American city, but the comic is written and published in the UK.

42. It was dropped in the ’60s : LSD
LSD is short for Lysergic acid diethylamide. A Swiss chemist called Albert Hofmann first synthesized LSD in 1938 in a research project looking for medically efficacious ergot alkaloids. But it wasn’t until some five years later when Hofmann ingested some of the drug accidentally that the psychedelic properties of the drug were discovered. Trippy, man …

48. Hollywood treasures : OSCARS
The Academy of Motion Picture Arts and Sciences (AMPAS) is the organization gives the annual Academy Awards, also known as the “Oscars”. The first Academy Awards were presented at a brunch in 1929, with an audience of just 29 people. It’s a slightly bigger event these days …

51. Francis of “What’s My Line?” : ARLENE
I only discovered the wonderful old American TV show “What’s My Line” a few years ago. I was familiar with it’s British version, but hadn’t spotted the US version in reruns until relatively recently. I fell in love with the beautiful Arlene Francis

watching those reruns. She was a regular panelist on the show, and the embodiment of elegance. I think I have seen every show ever made at this point.

58. Sounds heard by 57-Across : MOOS
Old MacDonald heard a MOO MOO here and a MOO MOO there …

In “The Lion King”, Nala is a lioness, the childhood friend of Simba.