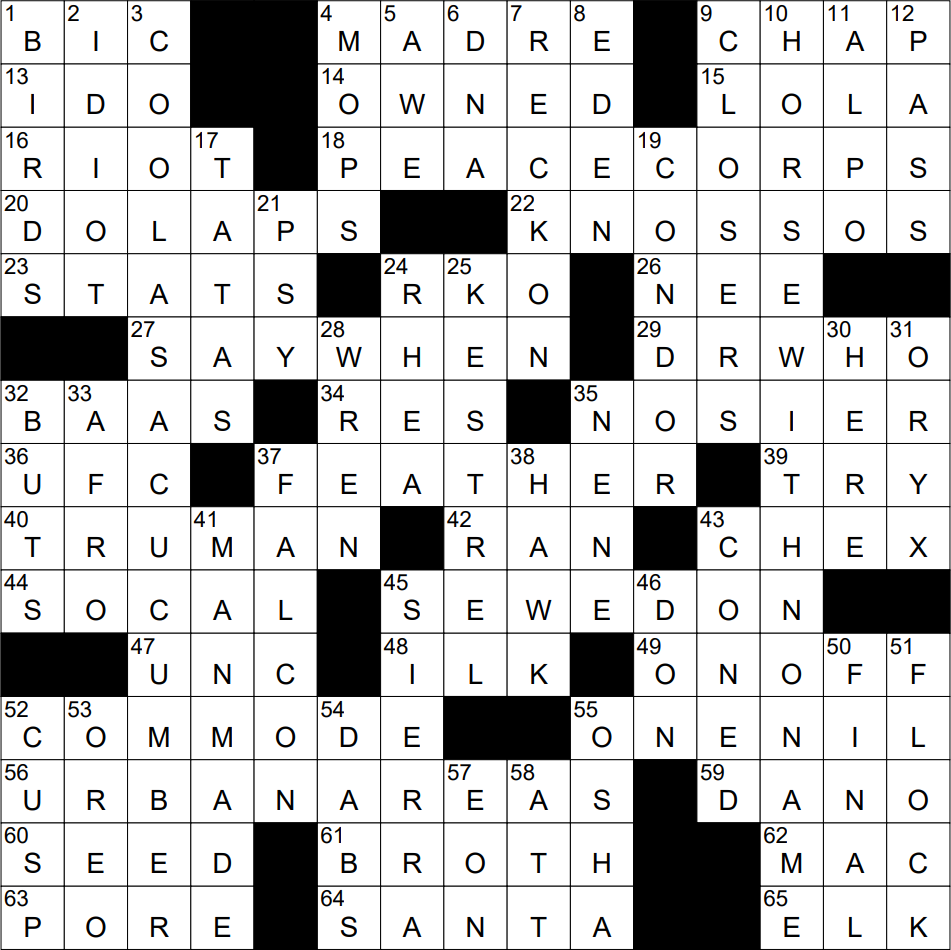 Constructed by: David Rockow
Edited by: Will Shortz

We have a FLOCK of BIRDS gathered around a FEATHER in the center of the grid. Nice!

“Lola” is a fabulous song that was written by Ray Davies and released by the Kinks back in 1970. Inspired by a real life incident, the lyrics tell of a young man who met a young “lady” in a club, danced with her, and then discovered “she” was actually a transvestite. The storyline isn’t very traditional, and the music is superb.

18 International service organization with a dove in its logo : PEACE CORPS

22 City in ancient Crete with a renowned labyrinth : KNOSSOS

Knossos was a city on the island of Crete that is widely believed to be the oldest city in Europe. The ruins of Knossos date back to the Bronze Age and have been extensively excavated since their discovery in 1878.

Harry S. Truman became vice president under President Franklin D. Roosevelt in January of 1945. He was in office for only 82 days when he was informed at the Whie House by First Lady Eleanor Roosevelt that her husband had died in Warm Springs, Georgia. Truman was sworn in as US president, and served out the remainder of Roosevelt’s term without naming a replacement vice president. When Truman ran for president in his own right in 1948, he shared the ticket with Alben W. Barkley. Truman and Barkely won that election, and were in office until 1953.

The University of North Carolina (UNC) at Chapel Hill started enrolling students way back in 1795, making it the first public university in the country to open its door to students.

True finches are relatively small, colorful birds known for their robust conical bills that have evolved for eating nuts and seeds. Back in the day, finches were used (along with canaries) in coal mines to detect the presence of carbon monoxide.

3 Unruffled : COOL AS A CUCUMBER

6 Molecule whose structure was discovered by Rosalind Franklin : DNA

“A Horse with No Name” is a fabulous song from the early seventies that was released by the band America. The song was originally banned by some radio stations in the US, due to claims that the “horse” in the title is a reference to the drug heroin.

19 Its Andean variety has the largest wingspan among all raptors : CONDOR

Ratites are species of birds that cannot fly. They are different physiologically than other birds in that they have nowhere on their sternum to attach the muscles needed for flight.

25 American raptor that’s the size of a mourning dove : KESTREL

The name kestrel applies to several different types of falcon. What distinguishes kestrels from other falcons is their behavior. Kestrels hover when hunting, at 50-60 feet above the ground, and then swoop down when they spot their prey.

The oryx is a large antelope species, mainly found in Africa but also in the Arabian Peninsula. One species was introduced by man into the White Sands Missile Range. As a result, the oryx is now considered an invasive species in the neighboring White Sands National Monument.

37 Its peregrine variety is the world’s fastest avian : FALCON

There are about 40 species of the birds of prey classed as falcons, with examples being several species of kestrel. Falcons differ from hawks and eagles in that they kill their prey with their beaks, as opposed to their talons. Famously, falcons swoop down on their prey at great speed. Peregrine falcons have been clocked at well over 200 miles per hour, making them the fastest-moving creatures on the planet.

“Sierra Madre” is Spanish for “Mother Mountain Range”, and is a name given to several mountain ranges around the world.

The Oreo was the best-selling cookie in the 20th century, and almost 500 billion of them have been sold since they were introduced in 1912 by Nabisco. In those early days the creme filling was made with pork fat, but today vegetable oils are used instead. If you take a bite out of an Oreo sold outside of America you might notice a difference from the homegrown cookie, as coconut oil is added in the overseas version to give a different taste.

In football, a quarterback’s (QB’s) performance can be measured by attempts (ATT), a statistic (stat).