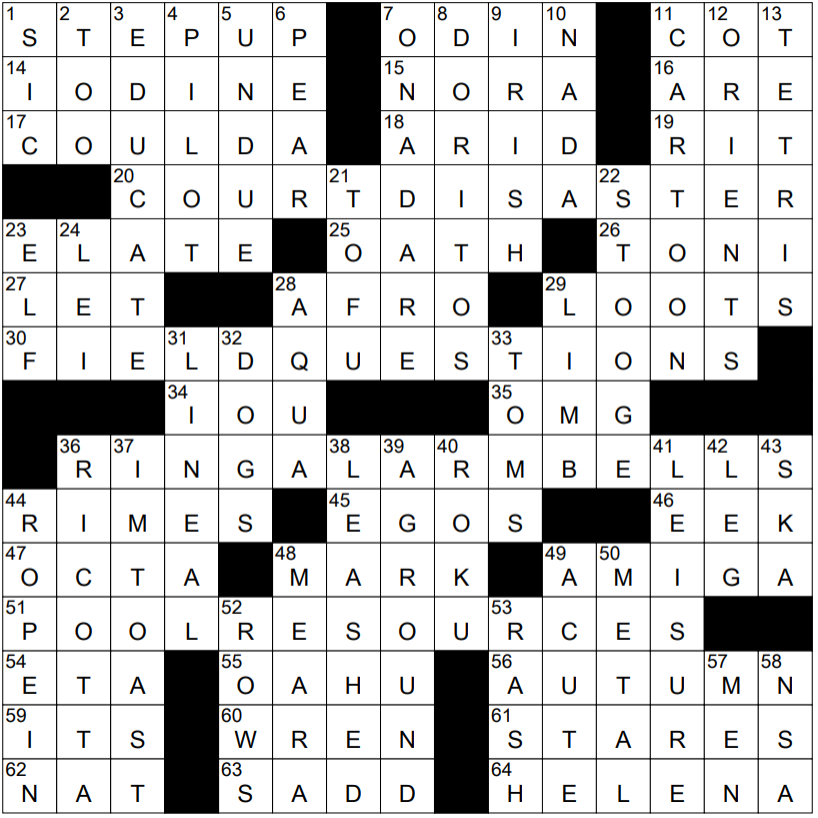 Themed answers are common phrases reinterpreted with reference to a sporting event cited in the clue. Also, each phrase starts with a verb, which is reinterpreted as a noun:

The Rochester Institute of Technology (RIT) is a private school in Rochester, New York that is actually located in the town of Henrietta. Despite the “technology” moniker, the school has a noted fine arts program. RIT was formed in 1891 when the Rochester Athenaeum (a literary society) merged with the Mechanics Institute (a technical training institute). The school’s first name was the Rochester Athenaeum and Mechanics Institute, but this was changed to RIT in 1944.

A string of typographical symbols such as “@#%!” that is used to replace a swear word is called a “grawlix”. The term “grawlix” was coined by Mort Walker, the creator of comic strip “Beetle Bailey”, in 1964.

Spirit Airlines is a low-cost carrier based in Miramar, Florida that was founded as Charter One in 1980. That said, the 1980 airline service was established as a branch of Clipper Trucking Company that dated back to 1964. Spirit started its low-fare service in 2007.

The athletic teams of the University of Notre Dame in South Bend, Indiana are known as the Fighting Irish. There are several debated etymologies for the moniker “Fighting Irish”, with the most generally accepted being that it was applied by the press in the 1920s, reflecting the team’s fighting spirit and grit, determination and tenacity. I guess “grit, determination and tenacity” are characteristics often associated with the Irish.

11 “SpongeBob SquarePants,” for one : CARTOON

SpongeBob SquarePants is a cartoon character in a Nickelodeon television series. Spongebob first appeared in 1999, and he “lives in a pineapple under the sea”. The character was created by marine biologist, cartoonist and animator Stephen Hillenburg.

“Tofu” is a name for bean curd, and is a Japanese word meaning just that … bean that has curdled. Tofu is produced by coagulating soy milk, using either salt or something acidic. Once the protein has coagulated, the curds are pressed into the familiar blocks. Personally I love tofu, but my wife absolutely hates it …

Ricotta is an Italian cheese made from the milk of a sheep or a cow. It produced from the whey of the milk, the liquid left after the curds have been separated out (curds are used to make “traditional” cheese). The whey is heated again so that the remaining protein precipitates out, producing ricotta cheese. The word “ricotta” literally means “recooked”, which makes sense to me now …

Roku is a manufacturer of digital media players that allow access to audio and video programming over the Internet that is shown on television. Roku was founded in Los Gatos, California in 2002 by Anthony Wood. Wood chose the company name “Roku” as it is the Japanese word for “six”, and Roku is the sixth company that Wood founded. For what it’s worth, Rokus used to be my streaming devices of choice …

“Men Explain Things to Me” is a 2014 collection of seven essays by American writer Rebecca Solnit. The book’s title is taken from the first essay, a 2008 work that explores the silencing of women, and the concept that men always know better. This essay inspired the use of the term “mansplaining”.