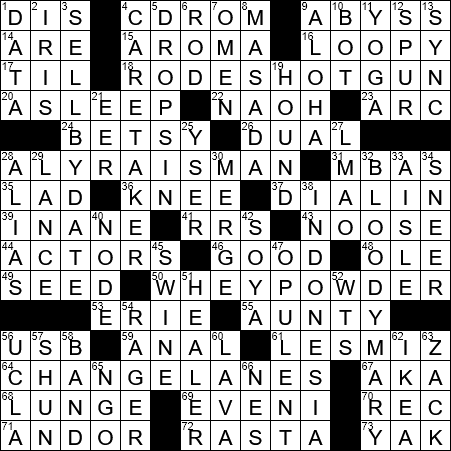 Constructed by: Anne Marie Crinnion
Edited by: Will Shortz

Themed answers each start with a synonym of “LANE” that has been CHANGED into a homophone of itself:

4 Something computers cannot write to or erase : CD-ROM

“We Are the World” is the 1985 charity single recorded by a whole host of celebrity singers who came together as “USA for Africa”. “We Are the World” was written by Michael Jackson and Lionel Richie, and sold over 20 million copies. The idea for the USA for Africa recording came out of the great success of the UK project, Band Aid’s “Do They Know It’s Christmas?”.

41 Monopoly properties you can’t put houses on, in brief : RRS

56 Kind of connection port on a PC : USB

67 Letters before an assumed name : AKA

The name “Masada” comes from the Hebrew word for fortress, and describes a plateau in the Judean Desert overlooking the Dead Sea. It is home to the ruins of ancient palaces and fortifications that date back to the days of Herod the Great, father of Herod who figured in the lives of Jesus of Nazareth and John the Baptist. After the Romans invaded Jerusalem, Jewish extremists settled on the mountaintop using it as a base to harass the invaders. Eventually Romans mounted an attack on the elevated fortress, building an elaborate wall and rampart to get to the encampment with some cover. After months of preparation, the Romans breached the walls only to discover the inner buildings all ablaze, and the 1,000 rebels and their families dead after a mass suicide.

A botnet is a network of computers running cooperatively to send spam messages. The computers are usually private machines infected with malware that run the bots without the owners’ knowledge.

30 Join the flow of traffic : MERGE

Indonesia is the fourth most populous country in the world, and is the country with the largest population of Muslims. And, Indonesia has an amazing 17,508 islands.

56 Sch. whose home football games used to include a live bear on the field : UCLA