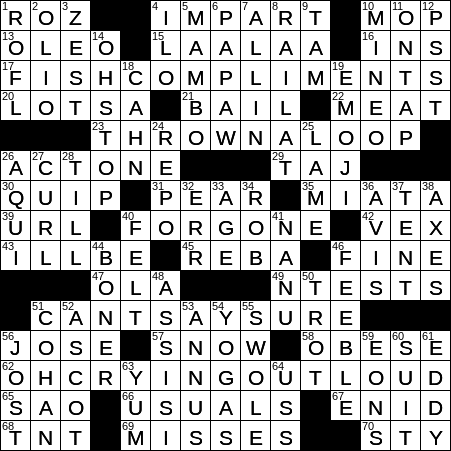 Constructed by: Chris A. McGlothlin
Edited by: Will Shortz

Themed answers are common phrases, but in each the word FOR is GONE:

Peri Gilpin is an actress best known for playing Roz Doyle on the hit sitcom “Frasier”. “Frasier” was a spinoff of “Cheers”. Gilpin actually made an appearance on “Cheers”, albeit playing a completely different character.

21 It can get you out of a place it rhymes with : BAIL

Someone posting bail might get you out of jail.

51 Is unable to pronounce the name of a deodorant brand? : CAN’T SAY SURE (from “can’t say for sure”)

Sure is a brand of deodorant sold in Britain and Ireland. The same product is marketed in North America as Degree.

62 Actress Sandra emoting? : OH CRYING OUT LOUD (from “oh, for crying out loud”)

“TNT” stands for Turner Network Television. The TNT cable channel made a big splash in the eighties when it started to broadcast old MGM movies that had been “colorized”, not something that was a big hit with the public. In recent years, the TNT programming lineup is touted with the tagline “We Know Drama”, and includes shows like “Judging Amy”, “ER” and “Cold Case”.

“Olio” is a term meaning “hodgepodge, mixture” that comes from the mixed stew of the same name. The stew in turn takes its name from the Spanish “olla”, the clay pot used for cooking.

10 Actor Sal of “Rebel Without a Cause” : MINEO

Honduras is a country in Central America that used to be known as Spanish Honduras, in order to differentiate it from British Honduras that is now called Belize. “Honduras” is the Spanish word for “the depths”, which is probably a reference to deep coastal waters.

A bobby pin is an unobtrusive hair clip. The clip became popular starting in 1899 with the introduction of the “bob cut”, hence the name “bobby pin”.

28 Much change may come from this : TILL

VISA doesn’t actually issue any credit or debit cards. VISA just sells the electronic systems and infrastructure to banks who then put the VISA logo on their own cards. Seeing the logo, both customer and merchant know to use the VISA system when making a transaction.

Boner is one of those terms that I just don’t like because it can be used offensively. “Boner” can be used to mean “faux pas, error”.

51 “Give My Regards to Broadway” composer : COHAN

I suppose much of what many of us know about American entertainer George M. Cohan comes from the 1942 film about his life called “Yankee Doodle Dandy”, which stars Jimmy Cagney as Cohan. There is an 8-foot bronze statue of Cohan on Broadway in New York City that was erected in 1959 at the behest of the lyricist Oscar Hammerstein.

“Weekend Update” is the longest-running of any recurring sketch on “Saturday Night Live” (SNL). In fact, the segment made its debut on the very first show, back in 1975. The first “anchor” at the “Weekend Update” desk was Chevy Chase.