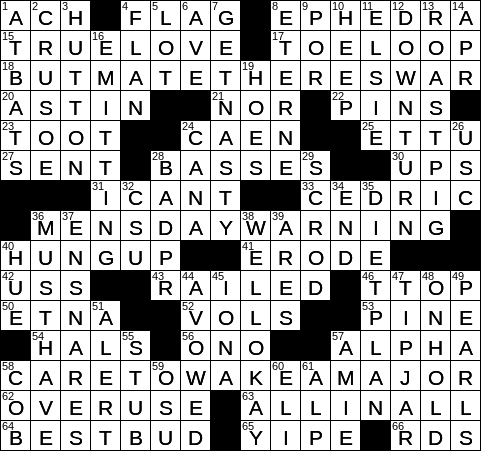 Constructed by: Bruce Haight & Peter A. Collins
Edited by: Will Shortz

Themed answers sound like common phrases, but with M- and W-sounds swapped. Also, black squares in the middle of the grid look like letters M and W:

Ephedra is a plant extract used in traditional Chinese medicine for the treatment of asthma and hay fever. Ephedra was banned by the FDA in 2004 as its use has been linked to many fatalities.

24 French city that was an objective for recapture on D-Day : CAEN

Cedric Diggory is a fellow student of Harry Potter at Hogwarts. He is two years ahead of young Harry.

The Tennessee Volunteers (the Vols) is the name given to the men’s sports teams at the University of Tennessee in Knoxville. The women’s teams are called the Lady Volunteers.

56 Musical artist behind the “War Is Over! (If You Want It)” campaign : ONO

In Daniel Defoe’s 1719 novel “Robinson Crusoe”, the castaway encounters a companion that Crusoe calls “Friday”, because the two first met on that day. Friday soon becomes his willing servant. This character is the source of our terms “Man/Guy Friday” and “Girl/Gal Friday”, which are used to describe a particularly competent and loyal assistant.

Betty Hutton’s most famous performance was probably playing the title role in the 1950 movie, “Annie Get your Gun”. She got the part even though filming had already started with Judy Garland as the star. Garland had to withdraw due to exhaustion, giving Hutton the role of her career.

Flan (also “crème caramel”) is a delicious dessert comprising a molded custard topped with a clear caramel sauce. The related crème brûlée is a dessert made from molded custard with a hard, burnt caramel layer on top.

Nowadays the word “luau” denotes almost any kind of party on the Hawaiian Islands, but to the purist a luau is a feast that always includes a serving of poi, the bulbous underground stems of taro.

California State University (CSU) is the largest university system in the country, with 23 campuses. About half of the bachelor’s degrees in the US awarded annually are from CSU.

Iona College is a Roman Catholic school run by Christian Brothers in New Rochelle, New York. The school’s sports teams are called the Iona Gaels, and the team mascot goes by the name “Killian”.

Eli Long served in the Union army during the Civil War, was wounded five times, and decorated five times for bravery.

The Battle of Selma was fought towards the end of the Civil War, in Selma, Alabama. In 1865, Selam had strong defenses, but lacked the men needed to make good use of them. The Union soldiers broke through the defensive line in several places and the Confederates surrendered the city in less than a day.

The Jungfrau is a peak in the Bernese Alps in Switzerland. “Jungfrau” translates from German as “maiden” or “virgin”.