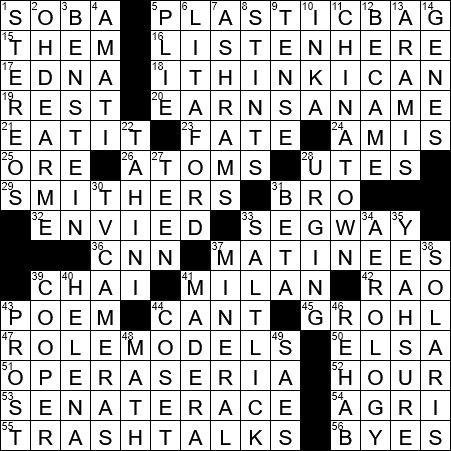 Today’s Wiki-est, Amazonian Googlies
Across
1. Noodle house noodles : SOBA
Soba is a thin Japanese noodle made from buckwheat flour. In Japan, the word “soba” tends to be used to describe any thin noodle, in contrast with the thicker noodles that are called udon.

17. Mother in “Hairspray” : EDNA
“Hairspray” is a 1988 musical comedy movie written and directed by the zany John Waters. The film had a lukewarm reception when it opened, but it spawned an extremely successful franchise. A Broadway musical of the same name opened in 2002, which won the Best Musical Tony Award in 2003. The film was remade in 2007.

18. Optimist’s mantra : I THINK I CAN
A “mantra” is a word that is used as a focus for the mind while meditating. The term is Sanskrit in origin, and is now used figuratively in English to describe any oft-repeated word or phrase.

23. It “will find a way,” according to Virgil : FATE
Publius Vergilius Maro (better known as “Virgil”) was a poet from Ancient Rome. His best known works are:

24. Fraternité fellows : AMIS
In French, fellows in a “fraternité” (brotherhood) are “amis” (friends).

36. Cable channel that once won a Four Freedoms Award for freedom of speech : CNN
CNN (Cable News Network) was launched in 1980 by the Turner Broadcasting System, and was the first television channel in the world to provide news coverage 24 hours a day.

37. Early showings : MATINEES
“Matinée” is a French word used to describe a musical entertainment held during the daytime. “Matinée” is derived from the word “matin”, meaning “morning”, although here the term is used in the sense of “daylight”.

39. ___ latte : CHAI
Chai is a drink made from spiced black tea, honey and milk, with “chai” being the Hindi word for “tea”. We often called tea “a cup of char” growing up in Ireland, with “char” being our slang word for tea, derived from “chai”.

42. “Kanthapura” novelist Raja ___ : RAO
Raja Rao was an Indian writer, but one who wrote and published mainly in English. His much acclaimed 1960 novel “The Serpent and the Rope” is largely autobiographical. Rao spent the last decades of life living in the US.

47. Paragons : ROLE MODELS
A paragon is an model of excellence, a peerless example. Ultimately the term derives from the Greek “para-” meaning “on the side” and “akone” meaning “whetstone”. This derivation comes from the ancient practice of using a touchstone to test gold for its level of purity by drawing a line on the stone with the gold and comparing the resulting mark with samples of known purity.

50. Disney queen voiced by Idina Menzel : ELSA
“Let It Go” is an incredibly successful song from the Disney animated film “Frozen” released in 2013. It was performed in the movie by Idina Menzel, who also was the voice actor for the character Elsa. “Let It Go” is one of the very few Disney songs to make it into the Billboard Top Ten.

51. Mozart’s “Il Re Pastore,” e.g. : OPERA SERIA
“Il re pastore” is an opera seria by Wolfgang Amadeus Mozart. The title translates into “The Shepherd King”. Mozart wrote the whole thing in six weeks.

53. Sexennial event : SENATE RACE
The six-year terms enjoyed by US senators are staggered, so that every two years about one third of the 100 US Senate seats come up for reelection.

56. What seeds often have : BYES
The word “bye”, as used in sport, originated in cricket. A bye is a run scored due to an error by the wicketkeeper (similar to a catcher in baseball) when he fails to stop a ball bowled by the bowler (like a pitcher in baseball). Later the word “bye” in sport came to mean the position of a player in a tournament who is left without a competitor when the rest have drawn pairs. In these commercial times, those byes tend to be awarded to the best (seeded) players, so that the most popular players always advance past the first round of competition.

Down
3. Economist who shared a Daytime Emmy with Jimmy Kimmel in 1999 : BEN STEIN
Many of us know Ben Stein as a very smart and entertaining TV personality. Before focusing on his screen career, Stein was a speechwriter for Presidents Richard Nixon and Gerald Ford.

4. Master of strings : AMATI
The first of the Amati family to make violins was Andrea Amati, who lived in the 14th century. He was succeeded by his sons, Antonio and Girolamo. In turn, they were succeeded by Girolamo’s son, Nicolo. Nicolo had a few students who achieved fame making musical instruments as well. One was his own son, Girolamo, and another was the famed Antonio Stradivari.

5. Ballet move : PLIE
The French word for “bent” is “plié”. In the ballet move known as a plié, the knees are bent. A “demi-plié” is a similar move, but with less bending of the knees.

6. “Kiss Me Deadly” rocker : LITA FORD
Lita Ford was the lead singer for The Runaways, later becoming famous for her solo work (never heard of her, outside of crosswords!).

7. Guru residences : ASHRAMS
“Ashram” is a Hindu term that traditionally describes a place of spiritual retreat, one that is typically located in a remote location conducive to spiritual instruction and meditation.

13. Estée Lauder fragrance for men : ARAMIS
Estée Lauder was a very successful businesswoman, with a reputation as a great salesperson. Lauder introduced her own line of fragrances in 1953, a bath oil called “Youth Dew”. “Youth Dew” was marketed as a perfume, but it was added to bathwater. All of a sudden women were pouring whole bottles of Ms. Lauder’s “perfume” into their baths while using only a drop or two of French perfumes behind their ears. That’s quite a difference in sales volume …

22. Baba ghanouj ingredient : TAHINI
“Tahini” is the Arabic name for the paste made from ground sesame seeds. Tahini is a major ingredient in hummus, one of my favorite dishes.

Baba ghanoush (also baba ghanouj) is an Arab dish with the main ingredient of mashed eggplant. It is sometimes served as a (delicious) dip.

27. Typical Snapchatter : TEEN
Snapchat is a messaging system that allows users to send photos and video clips to a limited list of recipients. The photos and clips, called “snaps”, can be viewed for only a few seconds before they are deleted from the recipient’s device, and from the Snapchat servers.

30. Soap-making equipment? : TV CAMERAS
The original soap operas were radio dramas back in the fifties. Given the structure of society back then, the daytime broadcasts were aimed at women working in the home as housewives. For some reason the sponsors of those radio shows, and the television shows that followed, were soap manufacturers like Procter & Gamble, Colgate-Palmolive and Lever Brothers. And that’s how the “soap” opera got its name …

31. A new computer program may be in it : BETA
In the world of software development, the first tested issue of a new program is usually called the “alpha” version. Expected to have a lot of bugs that need to be fixed, the alpha release is usually distributed to a small number of testers. After reported bugs have been eliminated, the refined version is called a “beta” and is released to a wider audience, but with the program clearly labeled as “beta”. The users generally check functionality and report further bugs that are encountered. The beta version feeds into a release candidate, the version that is tested just prior to the software being sold into the market, hopefully bug-free.

33. Source of sodium in the wild : SALT LICK
A “mineral lick” (also “salt lick”) is an exposed mineral deposit to which some animals gravitate as a source for minerals essential to their diet that are otherwise in short supply in the environment. Naturally occurring mineral licks are usually exposed by harsh weather, but artificial versions are also used, especially to attract wild animals to a particular location.

38. Classic Stanislaw Lem sci-fi novel : SOLARIS
Stanislaw Lem was a writer, mainly of science fiction, from Poland. Lem’s most famous work is the novel “Solaris”, which has been adapted into a film three times.

40. Capital that’s home to Last Chance Gulch : HELENA
Helena is the capital of the state of Montana, and is known as the Queen City of the Rockies. Helena’s main street has a very colorful name, namely Last Chance Gulch.

41. City and county of central California : MADERA
The California city of Madera was founded in 1876 by the California Lumber Company. “Madera” is a Spanish word meaning “lumber”.

49. Freelancers’ enclosures, for short : SAES
An SAE is a “stamped, addressed envelope”. An SASE is a “self-addressed, stamped envelope”.