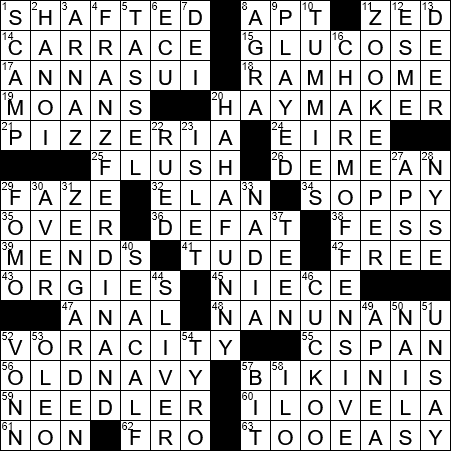 Today’s Wiki-est, Amazonian Googlies
Across
11. What many Brits don’t spell “realize” with : ZED
The letter named “zed” has been around since about 1400, and derives from the Greek letter zeta. The spelling and pronunciation of “zee” used in America today first popped up in the 1670s.

14. 500, e.g. : CAR RACE
The Indianapolis 500 race is held annually at the Indianapolis Motor Speedway in Speedway, Indiana. The race is run around a 2.5 mile oval, hence requiring 200 laps for completion. The first Indy 500 race was held on Memorial Day in 1911. The winner that day was one Ray Harroun. Harroun had seen someone using a rear view mirror on a horse-drawn vehicle, and decided to fit one on his Marmon “Wasp” motor car. Supposedly that was the first ever use of a rear view mirror on a motor vehicle.

15. Natural energy source : GLUCOSE
Glucose is a simple sugar that is also known as dextrose or grape sugar. It is widely found in nature as glucose is made by plants from carbon dioxide and water during photosynthesis.

20. Strong connection? : HAYMAKER
A haymaker is a wide, swinging punch. It is so called because the action involves using one’s weight and shoulder power to deliver the blow, with a motion much like using a scythe to cut hay.

21. Locale in “Do the Right Thing” : PIZZERIA
“Do the Right Thing” is a Spike Lee movie, released in 1989. Much of the action in the film is centered on a local pizzeria called “Sal’s” owned by Italian-American Salvatore Frangione (played by Danny Aiello).

24. Where the Shannon flows : EIRE
The Shannon is the longest river in Ireland, draining one fifth of the island’s area. It is named for a Celtic goddess named Sionna.

25. One may be straight : FLUSH
In the game of poker, a flush is a hand with all cards in the same suit.

32. Spirit : ELAN
Our word “élan” was imported from French, in which language the word has a similar meaning to ours, i.e “style” or “flair”.

38. Own (up) : FESS
The term “fess” is most often seen as part of the phrasal verb “to fess up” meaning “to admit to something”. “Fess” is simply a shortened form of “confess”.

48. Classic sitcom sign-off : NANU NANU
“Mork & Mindy” is a sitcom that originally aired from 1978 to 1982. The title characters were played by Robin Williams and Pam Dawber. Mork is an alien from the planet Ork who reports back to his superior called Orson. Orson is played by voice actor Ralph James. Ralph James was also known for providing the voice of Mr Turtle in famous Tootsie Pop commercials in the seventies. Nanu nanu!

56. H&M competitor : OLD NAVY
Old Navy is a store brand founded and owned by The Gap. The name Old Navy was taken from the Old Navy Cafe in Paris.

H&M is a Swedish clothing company. “H&M” is a brand name, short for Hennes & Mauritz. The words “Hennes” and “Mauritz” are a somewhat unusual combination (meaning “hers” and “Mauritz”), explained by the history of the company. H&M was founded in 1957, selling women’s clothing, and was called “Hennes”, the Swedish for “Hers”. The company acquired a hunting equipment store, with a line of men’s clothing called Mauritz Widforss (a man’s name), with the transaction leading to a new store name of Hennes & Mauritz, eventually shortened to H&M.

57. Providers of limited coverage? : BIKINIS
The origin of the word “bikini”, a type of bathing suit, seems very uncertain. My favorite story is that it is named after the Bikini Atoll, site of American A-bomb tests in the forties and fifties. The name “bikini” was chosen for the swim-wear because of the “explosive” effect it had on men who saw a woman wearing the garment!

59. Noodge : NEEDLER
“Noodge” is a slang term, meaning “to nag”, or as a noun it can mean “a nag”. It comes into English from the Yiddish word “nudyen” meaning “to bore, be tedious”.

60. 1983 song that begins “Hate New York City” : I LOVE LA
“I Love L.A.” is a song written and recorded by Randy Newman in 1983. The song is played at major sporting events in the city, after the home team scores or wins.

61. Only word spoken in Mel Brooks’s “Silent Movie” : NON
Marcel Marceau was the most famous mime of all time, and a native of Strasbourg in France. He is perhaps most associated with the character Bip the Clown who he played onstage. Marceau made a cameo appearance in Mel Brooks’s “Silent Movie”, portraying himself. In the scene, Mel Brooks is asking Marceau to appear in his movie (a question asked silently of course, in subtitles), and Marceau turns to the camera and speaks the only word in the whole film, “Non!” (French for “No!”). The mime speaks! Brilliant …

Down
2. Tower of ___ (classic math puzzle) : HANOI
The Tower of Hanoi is a mathematical puzzle or game in which different-sized disks are moved around on three vertical rods. The disks start off as a stack on one rod with the largest disk on the bottom. The idea is to move the disks one-at-a-time so that the entire stack ends up on another rod.

3. Desi Jr. of the 1960s group Dino, Desi & Billy : ARNAZ
Dino, Desi and Billy were a singing group in the late sixties. Two of the trio were sons of famous parents. “Dino” was Dean Paul Martin, son of singer, actor and comedian Dean Martin. “Desi” was Desi Arnaz, Jr., the son of Desi Arnaz and Lucille Ball. Rounding out the group was a friend called Billy Hinsche.

4. His assassination sparked W.W. I : FRANZ FERDINAND
As with WWII, tension was building as the European powers jockeyed for position on the world stage in the run-up to the First World War . The event that triggered the open warfare was the June 1914 assassination of Archduke Franz Ferdinand of Austria by a Yugoslav nationalist. There followed an ultimatum by the Austro-Hungarian Empire against the Kingdom of Serbia. This in turn triggered what were basically automatic threats invoked by age old alliances, and within weeks the major powers were at war. As these were colonial powers, the conflict spread around the world. By the time an armistice was signed in November 1918, the Austro-Hungarian Empire and the Ottoman Empire had ceased to exist, and the German and Russian Empires had been defeated.

5. Tarboosh feature : TASSEL
“Tarboosh” is the Arabic name for the hat called a “fez” in Turkish.

6. Coin introduced by Louis IX : ECU
The ecu is an Old French coin. When introduced in 1640, the ecu was worth three livres (an older coin, called a “pound” in English). The word “ecu” comes from the Latin “scutum” meaning “shield”. The original ecu had a coat of arms on it, a shield.

Louis IX was the King of France from 1226 until 1270. Louis IX is the only king of France to have been made a saint. This Saint Louis was the man who gave his name to the city of St. Louis, Missouri.

7. ___ gratia : DEI
The phrase “Deo gratias”, meaning “Thanks be to God”, is heard repeatedly during the Latin Mass in the Roman Catholic faith.

8. Famed Indian burial site : AGRA
Agra is a medieval city on the banks of the river Yamuna in India. Agra was also the capital of the Mughal Empire from 1556 to 1658. The city is home to three UNESCO World Heritage Sites:

12. Titular Salinger girl : ESME
J. D. Salinger wrote a short story called “For Esmé – with Love and Squalor”, originally published in “The New Yorker” in 1950. It is a story about a young English girl called Esme and an American soldier, and is set in WWII.

23. Key : ISLET
A “key” (also “cay”) is a low island offshore, as in the Florida Keys. Our term in English comes from the Spanish “cayo” meaning “shoal, reef”.

27. Place to pray : APSE
The apse of a church or cathedral is a semicircular recess in an outer wall, usually with a half-dome as a roof and often where there resides an altar. Originally, apses were used as burial places for the clergy and also for storage of important relics.

28. Where Molson Coors is TAP : NYSE
The New York Stock Exchange (NYSE) can give some quite descriptive ticker symbols to companies, for example:

29. Feeling that everyone’s having fun without you, in modern lingo : FOMO
Fear of missing out (FOMO)

31. Place of outdoor meditation : ZEN GARDEN
Japanese Zen gardens are inspired by the meditation gardens of Zen Buddhist temples. Zen gardens have no water in them, but often there is gravel and sand that is raked in patterns designed to create the impression of water in waves and ripples.

33. Tennis’s Petrova : NADIA
Nadia Petrova is a tennis player from Moscow who has ranked third in the world in doubles. Petrova has a good complement of athletic genes as her father was a successful hammer thrower and her mother won an Olympic bronze in the 400m track relay.

40. Harbor seal : SEA CALF
A sea calf is an alternative name for the harbor seal, also known as the common seal.

49. Trouble in the night : APNEA
Sleep apnea (“apnoea” in British English) can be caused by an obstruction in the airways, possibly due to obesity or enlarged tonsils.

52. Skiing great Lindsey : VONN
Lindsey Vonn is a World Champion alpine ski racer from Saint Paul, Minnesota. She is one of the few women to have won World Cup races in all five alpine racing disciplines: downhill, super-G, giant slalom, slalom and super combined. In fact, Vonn is the most successful US ski racer in history.

58. 1969 Peace Prize agcy. : ILO
The International Labour Organization (ILO) is an agency now administered by the UN which was established by the League of Nations after WWI. The ILO deals with important issues such as health and safety, discrimination, child labor and forced labor. The organization was recognized for its work in 1969 when it was awarded the Nobel Peace Prize.