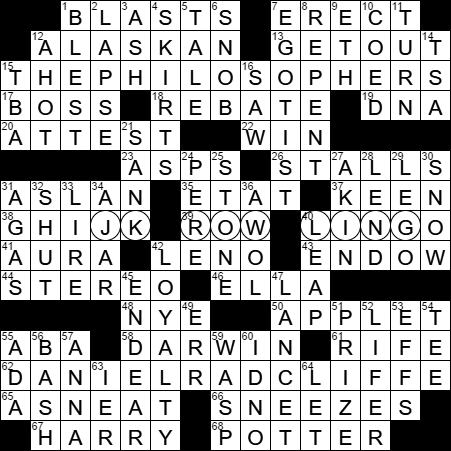 CROSSWORD CONSTRUCTOR: Brian Greer
THEME: J. K. Rowling
The circled letters running horizontally across the middle of today’s grid spells out the name of Scottish author J. K. ROWLING. We also have some themed answers that relate to her work:

62A. Star of the film version of the book referenced in 15-Across/25-Down : DANIEL RADCLIFFE

67A. Persistently torment : HARRY
68A. Crafty person at a wheel? : POTTER

15. With 25-Down, alchemists’ quest in a book released on June 26, 1997 : THE PHILOSOPHER’S …
(25D. See 15-Across : … STONE)
To an alchemist, the “philosopher’s stone” is a legendary substance with the power of turning base metals into gold. The philosopher’s stone also has the power to extend life, and is sometimes called the elixir of life.

The titles of the seven “Harry Potter books are:

31. Lion in “The Chronicles of Narnia” : ASLAN
In the C. S. Lewis books “The Chronicles of Narnia”, Aslan is the name of the lion character (as in “The Lion, the Witch and the Wardrobe”). “Aslan” is actually the Turkish word for lion. Anyone who has read the books will recognize the the remarkable similarity between the story of Aslan and the story of Christ, including a sacrifice and resurrection.

35. Coup d’___ : ETAT
A coup d’état (often just “coup”) is the sudden overthrow of a government, and comes from the French for “stroke of state”. The Swiss-German word “putsch” is sometimes used instead of “coup”, with “Putsch” translating literally as “sudden blow”.

40. Specialist’s vocabulary : LINGO
“Lingo” is a specialized vocabulary, as in “journalese” and “legalese”, for example.

42. Jay once seen nightly : LENO
Jay Leno was born James Leno in New Rochelle, New York. Jay’s father was the son of Italian immigrants, and his mother was from Scotland. Leno grew up in Andover, Massachusetts and actually dropped out of school on the advice of a high school guidance counsellor. However, years later he went to Emerson college and earned a Bachelor’s degree in speech therapy. Leno also started a comedy club at Emerson in 1973. Today Jay Leno is a car nut and owns about 200 vehicles of various types. You can check them out on his website: www.jaylenosgarage.com.

46. Singer Fitzgerald : ELLA
Ella Fitzgerald, the “First Lady of Song”, had a hard and tough upbringing. She was raised by her mother alone in Yonkers, New York. Her mother died while Ella was still a schoolgirl, and around that time the young girl became less interested in her education. She fell in with a bad crowd, even working as a lookout for a bordello and as a Mafia numbers runner. She ended up in reform school, from which she escaped, and found herself homeless and living on the streets for a while. Somehow Fitzgerald managed to get herself a spot singing in the Apollo Theater in Harlem. From there her career took off and as they say, the rest is history.

50. Small program : APPLET
“Applet” is the name given to a small application that runs within another, larger computer program.

58. “The Descent of Man” author : DARWIN
Englishman Charles Darwin studied medicine at the University of Edinburgh in Scotland but neglected his studies largely due to his interest in nature and natural history. In the early 1830s, a friend put forward Darwin’s name as a candidate for the post of “collector” on the voyage of HMS Beagle. The Beagle was intending to spend two years at sea primarily charting the coast of South America. The voyage ended up taking five years, during which time Darwin sent back copious letters describing his findings. Back in Britain these letters were published as pamphlets by a friend and so when Darwin eventually returned home in 1836, he had already gained some celebrity in scientific circles. It was while on the Beagle that Darwin developed his initial ideas on the concept of natural selection. It wasn’t until over twenty years later that he formulated his theories into a scientific paper and in 1859 published his famous book “On the Origin of the Species”. This original publication never even mentioned the word “evolution” which was controversial even back then. It was in 1871 that Darwin addressed head-on the concept that man was an animal species, in his book “The Descent of Man, and Selection in Relation to Sex”.

62. Star of the film version of the book referenced in 15-Across/25-Down : DANIEL RADCLIFFE
Daniel Radcliffe is the former child-actor who played the title role in the “Harry Potter” series of films. Radcliffe is doing okay in terms of money. He earned about 1 million pounds for the first “Harry Potter” movie, and about 15 million pounds for the last.

65. Comparable to a pin, in a phrase : AS NEAT
Apparently the idiom “neat as a pin” arose in the early 1800s, with the advent of mass production. Up until that time, pins were handmade and so were irregular and relatively flawed. Mass-produced pins were uniform and of consistent quality. So, something that was uniform and of consistent quality came to be described as “neat as a pin”.

Down
1. Given benediction, the old-fashioned way : BLEST
A benediction is a prayer usually spoken at the end of a religious service in which one invokes divine help and guidance.

3. ___ Wednesday : ASH
In the Christian tradition, the first day in the season of Lent is called Ash Wednesday. On Ash Wednesday, Palm Crosses from the prior year’s Palm Sunday are burned. The resulting ashes are mixed with sacred oil and then used to anoint worshipers on the forehead with the shape of a cross.

5. Shakespeare’s “The Winter’s ___” : TALE
“The Winter’s Tale” is a 1623 play by William Shakespeare. It is often categorized as one of Shakespeare’s “problem plays” in that it does not readily fall into the category of drama or romance. The first three acts are quite dramatic, while the last two acts are very humorous and provide us with a happy ending.

12. “Cat on ___ Tin Roof” : A HOT
“Cat on a Hot Tin Roof” is the play that won Tennessee Williams the Pulitzer Prize for Drama in 1955. The play was adapted into a famous film version in 1958, with Elizabeth Taylor and Paul Newman playing the leads.

15. Letters on a schedule meaning “We’ll let you know” : TBA
Something not yet on the schedule (“sked” or “sched.”) is to be advised/announced (TBA).

21. What the Titanic did, famously : SANK
The RMS Titanic set off on her tragic maiden voyage in 1912, sailing from Southampton, England bound for New York City. Regulations only required that the ship have lifeboat capacity for 1,178 people, even though a full complement of passengers and crew was 3,547. When the order was given to abandon ship, the captain adhered to the traditional protocol of “women and children first”. As a result, only 20% of male passengers survived the disaster, compared to 75% of the female passengers. Perhaps more telling is that 61% of those in first class survived, and only 25% of those in third class. The crew fared even worse though, with only 24% making it.

29. Toy block brand : LEGO
Lego is manufactured by Lego Group, a privately held company headquartered in Billund, Denmark. The company was founded by a carpenter called Ole Kirk Christiansen in 1934 and the now-famous plastic interlocking blocks were introduced in 1949. The blocks were originally sold under the name “Automatic Binding Bricks” but I think “Lego” is easier to remember! The name “Lego” comes from the Danish term “leg godt” meaning “play well”.

31. Turkish pooh-bahs : AGAS
The term “pooh-bah” (also “poobah”), meaning an ostentatious official, comes from the world of opera. Pooh-Bah is a character in the wonderful Gilbert & Sullivan comic opera “The Mikado”. Famously, Pooh-Bah holds many, many offices, including that of “Lord High Everything Else”.

33. Abandoned European capital : LIRE
The word “lira” is used in a number of countries for currency. “Lira” comes from the Latin for “pound” and is derived from a British pound sterling, the value of a Troy pound of silver. For example, the lira (plural “lire”) was the official currency of Italy before the country changed over to the euro in 2002.

34. Not quite closed : AJAR
Our word “ajar” is thought to come from Scottish dialect, in which “a char” means “slightly open”.

47. Surgical knife : LANCET
“Lancet” is another name for a scalpel. There’s a publication called “The Lancet”, which is probably the world’s most respected medical journal. It is certainly the oldest, first published in 1823.

55. Palindromic Nabokov title : ADA
“Ada” is a 1969 novel by Vladimir Nabokov. The story takes place in the 1800s on Antiterra, an Earth-like planet that has a history similar to ours but with interesting differences. For example, there is a United States, but that country covers all of North and South America. What we call eastern Canada is a French-speaking province called “Canady”, and western Canada is a Russian-speaking province called “Estody”. The storyline is about a man called Van Veen who, when 14 years old, meets for the first time his cousin, 11-year-old Ada. The two cousins eventually have an affair, only to discover later that they are in fact brother and sister.

57. “___ and the King of Siam” : ANNA
“Anna and the King of Siam” is a semi-biographical novel written by Margaret Landon and first published in 1944. The book tells the largely true story of Anna Leonowens who spent five years in Siam teaching English to the children and wives of King Mongkut. The novel was adapted as a 1946 movie of the same name starring Irene Dunne and Rex Harrison. Then followed a 1951 stage musical titled “The King and I”. The musical was written as a vehicle for Gertrude Lawrence, who played Anna. Rex Harrison was asked to play the King, but he turned it down and Yul Brynner was cast instead. A movie version of the stage musical was released in 1956, famously starring Yul Brynner and Deborah Kerr.

59. Big stinger : WASP
While the wasp is considered to be a nuisance by many, the insect is very important to the agricultural industry. Wasps prey on many pest insects, while having very little impact on crops.

60. Nine-digit fig. on a Social Security card : ID NO
A Social Security number (SSN) is divided into three parts i.e AAA-GG-SSSS, Originally, the Area Number (AAA) was the code for the office that issued the card. Since 1973, the Area Number reflects the ZIP code from which the application was made. The GG in the SSN is the Group Number, and the SSSS in the number is the Serial Number. However, this is all moot, as since 2011 SSN’s are assigned randomly. However, some random numbers have been excluded from use, i.e. Area Numbers 000, 666 (!) and 900-999.