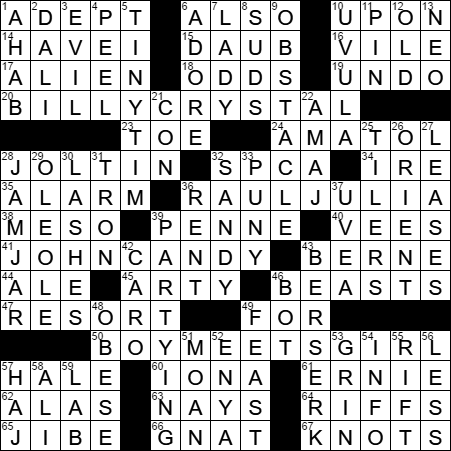 CROSSWORD CONSTRUCTOR: Dan Margolis
THEME: Boy Meets Girl
Each of today’s themed answers is the name of a comic actor. The first name of each is a BOY’S given name, and the second can be a GIRL’S given name:

20A. Actor who has hosted the Oscars nine times, a number second only to Bob Hope : BILLY CRYSTAL
36A. He played Gomez in 1991’s “The Addams Family” : RAUL JULIA
41A. Comic actor who was an original cast member of SCTV : JOHN CANDY

Today’s Wiki-est, Amazonian Googlies
Across
17. First of a series of sci-fi movies starring Sigourney Weaver : ALIEN
The 1979 sci-fi horror movie “Alien” was the big break for Sigourney Weaver as it was her first lead role, and her character ended up as central to a whole set of sequels. The movie’s producers made a very conscious decision to cast a female in the lead role so as to have the film stand out in the male-dominated genre of science fiction. Famously, the film was publicized with the tagline “In space no one can hear you scream”.

20. Actor who has hosted the Oscars nine times, a number second only to Bob Hope : BILLY CRYSTAL
Billy Crystal is an actor and comedian who first gained fame as the character Jodie Dallas on the seventies sitcom “Soap”. Crystal is also famous for hosting the Academy Awards, and has done so nine times. Only Bob Hope has hosted the event more times, and he did so on 18 occasions.

24. Powerful explosive : AMATOL
Amatol is a mixture of TNT and ammonium nitrate. Amatol is no longer used today, but featured extensively in the two world wars. TNT, which was relatively costly, was able to “go further” with the addition of cheaper ammonium nitrate (fertilizer) with very little degradation in destructive power.

28. Baseball’s ___ Joe DiMaggio : JOLTIN’
Joe DiMaggio was born not too far from here, in Martinez, California, the son of Italian immigrants. The family moved to San Francisco when Joltin’ Joe was just a baby. Joe’s Dad was a fisherman, and it was his hope that all his sons would follow him into his trade. But Joe always felt sick at the smell of fish, so fishing’s loss was baseball’s gain.

32. Watchdog org.? : SPCA
Unlike most developed countries, the US has no “umbrella” organization with the goal of preventing cruelty to animals. Instead there are independent organizations set up all over the nation using the name SPCA. Having said that, there is an organization called the American Society for the Prevention of Cruelty to Animals (ASPCA) that was originally intended to operate across the country, but really it now focuses its efforts in New York City.

36. He played Gomez in 1991’s “The Addams Family” : RAUL JULIA
Raúl Juliá was a Hollywood actor from San Juan, Puerto Rico. Julia had a very distinguished career, but is perhaps best known for portraying Gomez Addams in the two film adaptations of “The Addams Family”.

38. Prefix with -zoic : MESO-
The Mesozoic Era is also known as the Age of the Dinosaurs, as most dinosaurs developed during that time and the era ended with the extinction of all dinosaurs (except the avian species, which developed into our modern birds). The Mesozoic Era started with another cataclysmic event, the so called “Great Dying”, the largest mass extinction in the history of our planet. During the “Great Dying” over 90% of all marine species and 70% of all terrestrial vertebrate species died off.

39. Tube-shaped pasta : PENNE
Cylindrical pasta is known in general as “penne”, and there are many variants. For example, ziti is a particularly large and long tube with square-cut ends. “Penne” is the plural of “penna”, the Italian for “feather, quill”.

40. Geese formations : VEES
Apparently, geese fly in a V-formation for a couple of reasons. One is that it makes for efficient flight and conserves energy. The leading bird gets no advantage, but every following bird gets to “slipstream” a little. It has been noted that the lead bird drops to the back of the formation when he/she gets fatigued. It’s also thought that the flock can stick together more easily when in formation, so it is more difficult to lose someone along the way.

41. Comic actor who was an original cast member of SCTV : JOHN CANDY
John Candy was a Canadian comedian and actor. He was an alum of Canada’s famed comedy troupe called the Second City (later “SCTV”). In the world of movies I have to say my favorite of Candy’s performances were in supporting roles, as in “Stripes” and “Home Alone”. Sadly, Candy died of a heart attack in 1994, when he was only 43 years old.

43. Swiss capital, to French speakers : BERNE
Bern (sometimes “Berne”, especially in French) is the capital city of Switzerland. The official language of the city is German, but the language most spoken in Bern is a dialect known as Bernese German.

44. India pale ___ : ALE
India pale ale (IPA) is a style of beer that originated in England. The beer was originally intended for transportation from England to India, hence the name.

47. Club Med, for one : RESORT
Club Méditerranée is usually referred to as “Club Med”. It is a French company that started in 1950 with a resort on the Spanish island of Mallorca in the Mediterranean. It was originally a “club” with annual membership dues. Now it is an operator of numerous all-inclusive resorts located all over the world.

57. In fine fettle : HALE
Both the words “hale” and “healthy” derive from the Old English “hal” meaning healthy.

60. College in New Rochelle, N.Y. : IONA
Iona College is a Roman Catholic school run by Christian Brothers in New Rochelle, New York. The school’s sports teams are called the Iona Gaels, and the team mascot goes by the name Killian.

66. Itsy-bitsy biter : GNAT
Gnats are attracted to the smell of rotting food, and to vinegar. Simple homemade traps that use vinegar are often constructed to attract and kill gnats.

67. Units of nautical speed : KNOTS
A knot (kt.) is a unit of speed equal to one nautical mile per hour. Traditionally a vessel’s speed was determined by using a “chip log”. A chip log is made up of a wooden board attached to a line wrapped around a reel. The line (called a “log-line”) had knots tied in it at uniform spacings. To determine the vessel’s speed the board was thrown overboard and the line allowed to unroll. The speed was then the “number of knots” paid out in a fixed time interval.

Down
1. Melville captain : AHAB
Captain Ahab is the obsessed and far from friendly captain of the Pequod in Herman Melville’s “Moby-Dick”. The role of Captain Ahab was played by Gregory Peck in the 1956 John Huston film adaptation. Patrick Stewart played Ahab in a 1998 miniseries in which Peck made another appearance, as Father Mapple.

2. Limp watch painter : DALI
“The Persistence of Memory” is probably Salvador Dalí’s most famous work. It features the celebrated “melting clocks”, and you can see the work in the MoMA in New York City.

7. ___ Gaga : LADY
“Lady Gaga” is the stage name of Stefani Germanotta. Germanotta is a big fan of the band Queen, and she took her stage name from the marvelous Queen song titled “Radio Ga Ga”.

10. Throat dangler : UVULA
The uvula is that conical fleshy projection hanging down at the back of the soft palate. The uvula plays an important role in human speech, particularly in the making of “guttural” sounds. The Latin word for “grape” is “uva”, so “uvula” is a “little grape”.

13. With 21-Down, military hawk : NEO-
21. See 13-Down : -CON
By definition, a neoconservative (neocon) is a former left-aligned politician who has moved to the right and supports the use of American power and military might to bring democracy, liberty, equality and human rights to other countries.

22. Key of Beethoven’s Symphony No. 7: Abbr. : A MAJ
If I had to name which of Beethoven’s symphonies I listen to most often, at the top of the list comes the 7th followed closely by the 9th, and then the 5th a little further down. But that four-note opening of the 5th … that is superb …

30. Mascara is applied to them : LASHES
Variants of mascara have been around a long time, and certainly there was a similar substance in use in Ancient Egypt. “Mascara” is a Spanish word meaning “stain, mask”.

31. 1982 Disney film : TRON
Released in 1982, Disney’s “Tron” was one of the first mainstream films to make extensive use of computer graphics. The main role in the movie is played by Jeff Bridges. The original spawned a 2010 sequel called “Tron: Legacy”, as well as a 2012 TV show called “Tron: Uprising”.

32. Devastating hurricane of 2012 : SANDY
2012’s Hurricane Sandy was the second-costliest hurricane in US history, with the extent of the damage only exceeded by 2005’s Hurricane Katrina. Sandy claimed 233 live along its path, including 71 in the US, across nine states. Because the storm’s devastation was so great, the World Meteorological Organization retired the name “Sandy” and will not be using again for a North Atlantic hurricane.

37. Iris’s place : UVEA
The uvea is the middle of the three layers that make up the eyeball. The iris is the colored part of the eye with an aperture in the center that can open or close depending on the level of light hitting the eye.

“Rigoletto” is one of Giuseppe Verdi’s most famous and oft-performed operas. The storyline comes from a Victor Hugo play called “Le roi s’amuse” (usually translated as “The King’s Fool”). Rigoletto is the king’s fool, the jester.

43. Crazy : BERSERK
Our word “berserk” meaning “deranged” comes from the “Berserkers”, Norse warriors described in Old Norse literature. Berserkers were renowned for going into battle in a fury, and some believe that they consumed drugged food to get themselves worked up for the fighting ahead.

46. Web crawler : BOT
A bot is computer program that is designed to imitate human behavior. It might crawl around the Web doing searches for example, or it might participate in discussions in chat rooms by giving pre-programmed responses. It might also act as a competitor in a computer game.

49. Thanksgiving meal : FEAST
Thanksgiving Day was observed on different dates in different states for many years, until Abraham Lincoln fixed the date for the whole country in 1863. Lincoln’s presidential proclamation set that date as the last Thursday in November. In 1941, President Franklin D. Roosevelt moved the holiday to the fourth Thursday in November, arguing that the earlier date would give the economy a much-needed boost.

52. New Age singer from Ireland : ENYA
Enya’s real name is Eithne Ní Bhraonáin, which can translate from Irish into Enya Brennan. Her Donegal family (in the northwest of Ireland) formed a band called Clannad, which included Enya. In 1980 Enya launched her very successful solo career, eventually becoming Ireland’s best-selling solo musician. And, she sure does turn up a lot in crosswords!

57. Journey to Mecca : HAJ
A Haji (also “Hajji”) is the term used for someone who has made a pilgrimage to Mecca, and it is sometimes also used as a form of address for such a person. The journey itself goes by the name “haj” or “hajj”.

58. “Aladdin” prince : ALI
In Disney’s version of the “Aladdin” story, released in 1992, the street urchin Aladdin uses one of three wishes to become a prince, so that he can get near to the Princess Jasmine, with whom he has become besotted. With the genie’s help, Aladdin takes on the persona of “Prince Ali of Ababwa”.