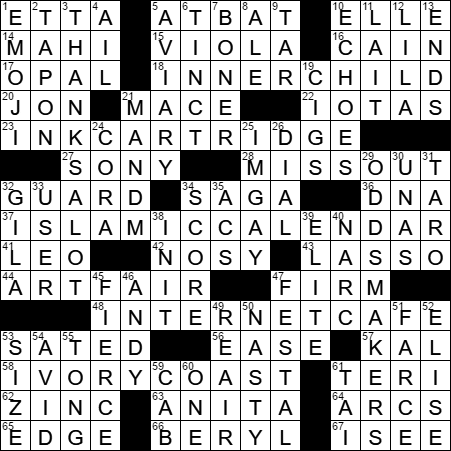 CROSSWORD SETTER: Bruce Haight
THEME: I See!
Today’s themed answers are each two words starting with the letters IC (sounds like “I see!”).

18A. What might make an adult jump in a pile of leaves : INNER CHILD
23A. Home office item that’s surprisingly expensive to replace : INK CARTRIDGE
37A. What Ramadan is an annual feature of : ISLAMIC CALENDAR
48A. Obsolescent place to go online : INTERNET CAFE
58A. West African country whose name is usually rendered in French : IVORY COAST

Today’s Wiki-est, Amazonian Googlies
Across
1. Jazzy James : ETTA
Etta James was best known for her beautiful rendition of the song “At Last”. Sadly, as she disclosed in her autobiography, James lived a life that was ravaged by drug addiction leading to numerous legal and health problems. Ms. James passed away in January 2012 having suffered from leukemia.

14. When doubled, a Hawaiian fish : MAHI
Mahi-mahi is the Hawaiian name for the dolphin-fish, also called a dorado. The mahi-mahi is an ugly looking creature if ever I saw one …

15. Relative of a cello : VIOLA
The viola looks like and is played like a violin, but is slightly larger. It is referred to as the middle voice in the violin family, between the violin and the cello.

17. Milky gemstone : OPAL
An opal is often described as having a milky iridescence, known as “opalescence”.

20. Rocker Bon Jovi : JON
Jon Bon Jovi was born John Francis Bongiovi, Jr., and he is the leader of the band that took his name: Bon Jovi.

21. Defensive spray : MACE
“Mace” is actually a brand name, originally introduced by Lake Erie Chemical when they started to manufacture “Chemical Mace”, with the name being a play on the club-like weapon from days of old. Mace was originally a form of tear gas, but Mace today uses a formula that is actually a pepper spray, a different formulation.

22. Greek vowels : IOTAS
Iota is the ninth letter in the Greek alphabet. We use the word “iota” to portray something very small as it is the smallest of all Greek letters.

23. Home office item that’s surprisingly expensive to replace : INK CARTRIDGE
Inkjet cartridges are relatively expensive. Printer manufacturers will sometimes see printers at a loss in order to get more printers into the market, knowing that they’re going to rake in the money on the cartridges. As a result, there are a lot of cartridges being refilled out there. Personally, I print very little these days, and what I do print is with a cheap and effective laser printer. It’s all black-and-white printing, but so much cheaper. Also, I never have to worry about inkjet cartridges drying out while they are still almost full …

27. Tokyo-based electronics giant : SONY
Sony was founded by Akio Morita and Masaru Ibuka. The two partners met in the Japanese Navy during WWII.

32. Player most likely to shoot a three-pointer : GUARD
That would be basketball.

36. Genetic code carrier : DNA
DNA was first isolated in 1869 by Swiss physician and biologist. The molecular structure of DNA was identified in 1953, by the American and British team of James Watson and Francis Crick.

37. What Ramadan is an annual feature of : ISLAMIC CALENDAR
Ramadan is the ninth month of the Islamic calendar, and is traditionally a period of fasting. The faithful that observe Ramadan refrain from eating, drinking and sexual relations from dawn to dusk everyday, a lesson in patience, humility and spirituality.

41. Sign before Virgo : LEO
Leo is the fifth astrological sign of the Zodiac. People born from July 23 to August 22 are Leos.

The astrological sign of Virgo is associated with the constellation of the same name. The Virgo constellation is related to maidens (virgins), purity and fertility.

43. Something thrown by a cowboy : LASSO
Our English word “lasso” comes from the Spanish “lazo”, and ultimately from the Latin “laqueum” meaning “noose, snare”.

53. Stuffed to the gills : SATED
“Sate” is a variant of the older word “satiate”. Both terms can mean either to satisfy an appetite fully, or to eat to excess.

56. Life of Riley : EASE
The phrase “life of Reilly” dates back to at least 1919. It may have originated in a song from the 1880s about a man called O’Reilly and how he became rich and lived an easy life.

58. West African country whose name is usually rendered in French : IVORY COAST
The Republic of Côte d’Ivoire is located in West Africa on the Gulf of Guinea. The country is often, mistakenly, referred to as the Ivory Coast, the direct translation from the French. The official language of the country is French, as for many years it was a French colony.

61. Actress Polo of “Meet the Parents” : TERI
Teri Polo’s most prominent role on the big screen was Pam Focker in “Meet the Fockers” and its sequel. Pam is the wife of the character played by Ben Stiller. Polo also played the wife of Presidential candidate Matt Santos in “The West Wing”.

66. Green gemstone : BERYL
The mineral beryl is a source of a number of different, semi-precious stones, depending on the nature of the impurities present. Pure beryl is colorless; blue beryl is called aquamarine, and green beryl is emerald. The source of the green color is mainly chromium.

Down
1. Symbol like “prayer hands” or “heart eyes” : EMOJI
An emoji is a character found on many cell phones now that is much like an emoticon, but more elaborate.

6. Hint of color : TINCT
To tinct is to add a little color to something.

7. Screw-up : BONER
“Boner” is one of those terms that I just don’t like because it can be used offensively. “Boner” can be used for a faux pas, an error.

8. India pale ___ : ALE
India Pale Ale (IPA) is a style of beer that originated in England. The beer was originally intended for transportation from England to India, hence the name.

11. Café au ___ : LAIT
“Café au lait” (coffee with milk) is usually strong drip coffee to which one adds steamed milk. At least that’s the way we tend to make in this country.

12. ___ Kedrova, Oscar-winning actress for “Zorba the Greek” : LILA
Lila Kedrova was a Russian-born French actress best-known for playing Mme. Hortense in the 1964 film “Zorba the Greek”. Kedrova won a Best Supporting Actress Oscar for that performance.

“Zorba the Greek” the film, and “Zorba” the musical, are adaptations of the 1952 novel “Zorba the Greek” by Nikos Kazantzakis. The 1964 film version stars Anthony Quinn in the title role, and Alan Bates. The movie is set and was filmed on location on the island of Crete, the home of author Kazantzakis.

19. Marlboros, e.g., for short : CIGS
Marlboro cigarettes were launched by Philip Morris in 1924 as a cigarette for women. To that end there was a red band around the filter designed to hide lipstick stains. In the fifties the brand was repositioned as a men’s cigarette, offering men a “manly” filtered cigarette as the world was becoming aware of the link between cigarettes and lung cancer. With the introduction of the Marlboro Man, the rugged cowboy riding across the west, sales rocketed from a 1% market share to become the 4th biggest seller in the country. The original Marlboro Man was model and actor named Darrell Winfield. He received loads of free cigarettes during his reign, I am sure. He died of lung cancer …

21. Candy item with plain and peanut varieties : M AND M
Forrest Mars, Sr. was the founder of the Mars Company. Forrest invented the Mars Bar while living over in England and then developed M&M’s when he returned to the US. Mars came up with the idea for M&M’s when he saw soldiers in the Spanish Civil War eating chocolate pellets. Those pellets had a hard shell of tempered chocolate on the outside to prevent them from melting. Mars got some of the funding to develop the M&M from William Murrie, the son of the president of Hershey’s Chocolate. It is the “M” and “M” from “Mars” and “Murrie” that gives the name to the candy.

24. “Downton Abbey” countess : CORA
In the incredibly successful period drama “Downton Abbey”, the patriarch of the family living at Downton is Robert Crawley, the Earl of Grantham or Lord Grantham. The character is played by Hugh Bonneville. Lord Grantham married American Cora Levinson (played by Elizabeth McGovern. Lord and Lady Grantham had three daughters, and no son. The lack of a male heir implied that the Grantham estate would pass to a male cousin, and out of the immediate family. The Grantham daughters are Lady Mary (played by Michelle Dockery), Lady Edith (played by Laura Carmichael) and Lady Sybil (played by Jessica Brown Findlay). Lady Sybil had the audacity to marry the family chauffeur, an Irish nationalist. The shame of it all …

31. Poi source : TARO
The corm of some taro plants is used to make poi, the traditional Hawaiian dish (that I think tastes horrible). When a taro plant is grown as an ornamental, it is often called Elephant Ears due to the shape of its large leaves.

32. ___ monster (desert lizard) : GILA
A Gila monster is a venomous lizard found in the southwestern US and northern Mexico, and is the only venomous lizard native to America. Gila monsters move along at a snail’s pace so aren’t normally a danger to humans.

40. Many a police officer on “The Wire” : NARC
I didn’t watch the HBO series called “The Wire” when it first aired. We ending up buying all five series on DVD and we watched the whole thing a couple of years ago. It’s is a great drama series, and I thoroughly recommend it. Personally, I think that HBO produces some of the best dramas on American television.

46. Artist Warhol : ANDY
Andy Warhol went through a period of painting iconic American products, including Coca-Cola bottles and Campbell’s tomato soup cans. In 1964 he participated in a gallery show called “The American Supermarket”. Along with other pop artists he contributed works including a painting of a can of Campbell’s tomato soup. He priced the painting at $1,500, and sold autographed cans of soup for $6 a piece.

51. Many a Monty Python skit : FARCE
The zany comedy show called “Monty Python’s Flying Circus” was first aired in 1969 on the BBC. The show ran for four seasons and finished up soon after John Cleese decided to leave the team and move onto other projects.

52. Beethoven honoree : ELISE
“Fur Elise” is a beautiful piece of music written by Beethoven, and is also known as “Bagatelle in A Minor”. “Fur Elise” means simply “For Elise”, but sadly no one knows for sure the identity of the mysterious dedicatee.

55. Half of a fireplace tool : TONG
A pair of tongs is a tool with a scissor-like hinge used to pick up things, like meat cooking on a barbecue grill or ice from an ice bucket. The verb “to tong” means “to handle with tongs”.

59. Taxi : CAB
We call cabs “taxis”, a word derived from “taximeter cabs” that were introduced in London in 1907. A taximeter was an automated meter designed to record distance travelled and fare to be charged. The term “taximeter” evolved from “taxameter”, with “taxa” being Latin for “tax, charge”.

61. Mai ___ : TAI
The Mai Tai cocktail is strongly associated with the Polynesian islands, but the drink was supposedly invented in 1944 in Trader Vic’s restaurant in Oakland, California. One recipe is 6 parts white rum, 3 parts orange curaçao, 3 parts Orgeat syrup, 1 part rock candy syrup, 2 parts fresh lime juice, all mixed with ice and then a float added of 6 parts dark rum.