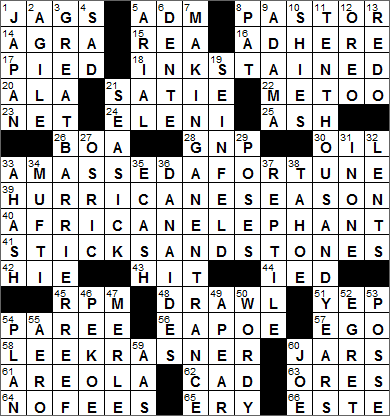 8. Service provider : PASTOR
A pastor is a minister or priest in some Christian traditions. “Pastor” is the Latin word for “shepherd”.

14. Much-photographed mausoleum site : AGRA
The most famous mausoleum in the world has to be the Taj Mahal in Agra, India. The Taj Mahal was built after the death of the third wife of Shah Jahan, Mumtaz Mahal (hence the name of the mausoleum). The poor woman died in childbirth delivering the couple’s 14th child.

15. 1978 Grammy nominee Chris : REA
Chris Rea is a singer-songwriter and respected blues guitar player from England. Rea’s biggest hit is a song that he wrote himself called “Fool (If You Think It’s Over”), released in 1978.

17. Blotchy, in a way : PIED
Something described as “pied” is patchy or blotchy in color, piebald. The term comes from the Middle English “pie”, an old name for the magpie, and is a reference to the bird’s black and white plumage.

20. Mimicking : A LA
The phrase “in the style of” can be translated in “alla” in Italian and “à la” in French.

21. “Enfantines” composer : SATIE
Erik Satie was a French composer most famous for his beautiful composition, the three “Gymnopédies”. I have tried so hard to appreciate other works by Satie but I find them so very different from the minimalist simplicity of the lyrical “Gymnopédies”.

24. Book and film title character surnamed Gatzoyiannis : ELENI
Nicholas Gage (born Nikolaos Gatzoyiannis) is a Greek-American author and investigative journalist. Gage wrote two memoirs, “Eleni” and “A Place for Us”. “Eleni” tells of his life in Greece during WWII and the Greek Civil War. The title is a tribute to his mother Eleni who was executed by Communists who occupied her village, simply because she helped her children escape from the ravages of a war of occupation. “Eleni” was adapted into a movie in 1985, with John Malkovich playing Gage.

28. Measure of econ. health : GNP
A country’s Gross National Product (GNP) is the value of all services and products produced by its residents in a particular year. GNP includes all production wherever it is in the world, as long as the business is owned by residents of the country concerned. Gross Domestic Product (GDP) is different, although related, and is the value of all services and goods produced within the borders of the country for that year.

39. Depression era? : HURRICANE SEASON
Hurricanes are given names primarily to help the public keep track dangerous systems. The names are decided ahead of the hurricane season, with the first system given a name beginning with A, the second, B etc. The names are alternated between male and female names throughout the season. Also, if the first storm of the season is male, then the following year a female name is chosen. For hurricanes in the North Atlantic, names are assigned for every letter, except Q, U, X, Y and Z. The most frequently used name is Arlene, which was used for ten different storms from 1959 to 2011.

41. Hurtful pair in a playground rhyme : STICKS AND STONES

Sticks and stones may break my bones
But words will never hurt me.

44. Mil. roadside hazard : IED
Having spent much of my life in the border areas between southern and Northern Ireland, sadly I am all too familiar with the devastating effects of Improvised Explosive Devices (IEDs). One has to admire the bravery of soldiers who spend their careers defusing (or attempting to defuse) such devices in order to save the lives and property of others.

45. 78 letters : RPM
The first standard for the rotational speed of gramophone records was 78 rpm. Like so many things it seems, the US version of “78” was slightly different from that for the rest of the world. The US record was designed to play at 78.26 rpm, whereas the standard in the rest of the world was 77.92 rpm. So, imported records playing on American equipment didn’t sound quite as they were intended.

48. Dixieland sound : DRAWL
“Dixie” is a nickname sometimes used for the American South, and often specifically for the original 11 states that seceded from the Union just prior to the Civil War. It’s apparently not certain how the name “Dixie” came about. One theory is that it comes from the term “dixie” which was used for currency issued by banks in Louisiana. The 10-dollar bills had the word “dix” on the reverse side, the French for “ten”. From the banknote, the French speaking area around New Orleans came to be known as Dixieland, and from there “Dixie” came to apply to the South in general.

51. “10-4” : YEP
There is a set of “ten-codes” that were developed in 1937 for the use of law enforcement departments. As of 2006, the US federal government is recommending that they be replaced by plain language due to a lack of standardization in ten-codes. Examples of ten-codes are:

The Cole Porter musical “Can-Can” was first produced on Broadway, in 1953, where it ran for two years. There was a very successful film adaptation released in 1960, starring Shirley MacLaine, Frank Sinatra and Maurice Chevalier. During filming, the Soviet leader Nikita Khrushchev visited the set as part of a tour of 20th Century Fox studios. He made a big splash in the media at the time describing what he saw as “depraved” and “pornographic”.

56. “To Helen” writer, in footnotes : EA POE
Edgar Allen Poe wrote two versions of his poem “To Helen”. The “Helen” in the poems might be the Greek goddess of light or perhaps Helen of Troy. If fact Poe wrote the poem in honor of Jane Stanard, who was the mother of one of his childhood friends.

62. He’s unrefined : CAD
Our word “cad”, meaning “a person lacking in finer feelings”, is a shortening of the word “cadet”. “Cad” was first used for a servant, and then students at British universities used “cad” as a term for a boy from the local town. “Cad” took on its current meaning in the 1830s.

Down
1. Follower of a diet system : JAPAN
The Diet is the national legislature of Japan. The Diet is a bicameral institution, comprising a lower house known as the House of Representatives and an upper house known as the House of Councillors. The Imperial Diet first convened in 1889, although the current form first met in 1947 after Japan adopted her post-WWII constitution.

5. Alternative to Geneva : ARIAL
Geneva and Arial are fonts.

6. Al ___ : DENTE
The Italian expression “al dente” literally means “to the tooth” or “to the bite” and is used to describe not only pasta, but also vegetables that are cooked so that they are tender and yet still crisp.

9. “Battlestar Galactica” role : ADAMA
“Battlestar Galactica” is a whole franchise these days, based on an original television series that aired in 1978. The executive producer of that first series was Glen A. Larson who had been trying get the show off the ground since the sixties. Larson was finally able to get some finances for his sci-fi show on the back of the success of the 1977 movie “Star Wars”.

11. What “Banzai!” literally means : TEN THOUSAND YEARS
During WWII the Japanese infantry when making mass assaults would often yell out “Banzai!”, a shout of courage, and encouragement, as they ran into enemy fire. These mass assaults became known by the Allied soldiers as “banzai attacks”. The term “banzai” is not limited to use in times of war, but is used like a toast wishing long life, as “banzai” translates into “ten thousand years”.

12. Food brand since 1912 : OREO
The Oreo cookie was introduced in 1912. The Oreo was intended to be a competitor to the very similar Hydrox cookie which had debuted four years earlier. The Oreo won the resulting battle on the grocery store shelves …

19. Who called a date “a job interview that lasts all night” : SEINFELD
Jerry Seinfeld is a standup comedian and comic actor from Brooklyn, New York. Jerry is most famous of course for playing the lead in the “Seinfeld” sitcom from 1989 to 1998. “Seinfeld” was good for Jerry, earning him $267 million in 1998 alone, making him the highest-paid celebrity that year.

27. Shakespearean duel overseer : OSRIC
In William Shakespeare’s play “Hamlet”, Osric is the courtier that Claudius dispatches to invite Hamlet to participate in a duel.

32. Temporary quitting times? : LENTS
In Latin, the Christian season that is now called Lent was termed “quadragesima” (meaning “fortieth”), a reference to the forty days that Jesus spent in the desert before beginning his public ministry. When the church began its move in the Middle Ages towards using the vernacular, the term “Lent” was introduced. “Lent” comes from “lenz”, the German word for “spring”.

34. Civvies : MUFTI
“Mufti” is civilian dress that is worn by someone who routinely wears a uniform. The term is probably related somehow to the Arabic “mufti”, the word for a Muslim scholar who interprets Islamic law.

35. What Google Wallet uses : E-CASH
Google Wallet is a clever mobile payment system that allows users to store credit cards, loyalty cards, gift cards and the like on cell phones. The ideal use of the system involves just tapping one’s phone at Wallet-enabled terminal at checkout. But, there aren’t many stores that have such a capability. Great idea though …

36. Eternal water-pourers in Hades : DANAIDES
According to Greek mythology, Danaus was the twin brother of Aegyptus, a mythical king of Egypt. Danaus had fifty daughters, known as the Danaids or Danaides, who were ordered to marry the fifty sons of Aegyptus. All but one of the Daughters of Danaus killed their husbands on their wedding night. As a result of their crimes, all are condemned to carry water in a sieve or perforated vase for the eternity.

37. Chameleon, e.g. : REPTILE
Chameleons are a family of Old World lizards, many of which have the ability to change their skin coloration and pattern. The term “chameleon” is simplified Latin, and is ultimately derived from the Greek for “lion of the ground”.

38. Literally, “big water” : TAHOE
Lake Tahoe is up in the Sierra Nevada mountains, right on the border between California and Nevada. Lake Tahoe is the largest alpine lake in the country, and the largest lake in general, behind the five Great Lakes. It’s also the second deepest lake, with only the beautiful Crater Lake in Oregon being deeper. Given its location, there are tall casinos that sit right on the shore on the Nevada side of the state line where gambling is legal.

46. What some caddies hold : PEKOE
A pekoe (or more commonly “orange pekoe”) is a medium-grade black tea. There is no orange flavor in an orange pekoe tea. The “orange” name most likely derived from the name of the trading company that brought the tea to Europe from Asia.

A “caddy” is a container used for tea. “Caddy” comes from the Malay word “kati”, a unit of weight used as a standard by British tea companies in the East Indies.

47. ___ Norman (cosmetics franchise) : MERLE
Merle Norman Cosmetic was founded in the late twenties by Merle Nethercutt Norman. One of Norman’s key strategies from the outset was encourage her customers to “try before you buy”.

50. Circumlocutory : WORDY
“Circumlocution” is the use of more words than are needed to address a topic, a “speaking around” or indirect way of talking.

52. Target of the plume trade : EGRET
The Snowy Egret is a small white heron, native to the Americas. At one time the egret species was in danger of extinction due to hunting driven by the demand for plumes for women’s hats.

53. Western union? : POSSE
Our word “posse” comes from an Anglo-Latin term from the early 15th century “posse comitatus” meaning “the force of the county”.

60. ___ College : JOE
“Joe College” is a term that was used particularly in the 1930s, a personification of the typical male college student.