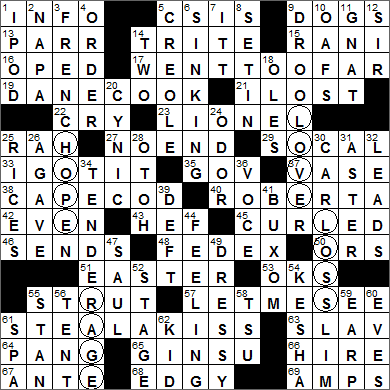 CROSSWORD SETTER: Zhouqin Burnikel
THEME: Sinking Feeling … today’s themed answers are all in the down- (SINKING-) direction and contain a hidden word that is a FEELING:

9. Lady and the Tramp, e.g. : DOGS
“Lady and the Tramp” is a classic animated feature from Walt Disney, released in 1955. Who can forget the scene where the Tramp and Lady are “on a date” and together eat that one strand of spaghetti? So cute!

15. Punjabi princess : RANI
“Raja” (also “rajah”) is word derived from Sanskrit that is used particularly in India for a monarch or princely ruler. The female form is “rani” (also “ranee”) and is used for a raja’s wife.

19. Comedian with the double-platinum album “Retaliation” : DANE COOK
Dane Cook is a stand-up comedian who has had a number of roles in movies as well. He had a setback handling the income he was earning from his work though back in 2008. His half-brother had been his business manager up to that point and it was discovered that he had embezzled millions of dollars from Dane. The half-brother and his wife are now in prison for the crime.

23. Soccer superstar Messi : LIONEL
Lionel Messi is a soccer player from Argentina. Messi was awarded FIFA’s Ballon d’Or (Golden Ball) award from 2009 to 2013. The Ballon d’Or is presented to the player who is considered the best in the world in the prior year.

35. WhiteHouse.___ : GOV
The White House website went live in 1994, although the design and content changes with each new administration. The website’s address is WhiteHouse.gov. It’s a good idea to note the ending of the address, because WhiteHouse.com used be an adult site!

37. Bouquet holder : VASE
“Bouquet” comes from the French word for a “bunch” in the sense of bunch of flowers. In French the term was derived from an older word describing a little wood, or a small grove of trees.

38. Massachusetts vacation destination : CAPE COD
Cape Cod is indeed named after the fish. It was first called Cape Cod by English navigator Bartholomew Gosnold in 1602 as his men caught so many fish there.

43. Mogul with a Bunny : HEF
Hugh Hefner (often called “Hef”) is from Chicago. His first publishing job was in the military, where he worked as a writer for a US Army newspaper from 1944-46. He went to college after his military service and then worked as a copywriter for “Esquire” magazine. He left “Esquire” to found his own publication that he called “Playboy”, which first hit the newsstands in 1953. “Playboy” has been around ever since.

48. “The World on Time” courier : FEDEX
FedEx began operations in 1973 as Federal Express, but now operates very successfully under it’s more catchy abbreviated name. Headquartered in Memphis with its “SuperHub” at Memphis International Airport, FedEx is the world’s largest airline in terms of tons of freight flown. And due to the presence of FedEx, Memphis Airport has the largest-volume cargo operation of any airport worldwide.

51. Celebration with a bunny : EASTER
The original Easter Bunny was an Easter Hare, a character popular in the German Lutheran community. The Easter Hare was a kind of judge, similar to Santa Claus, deciding if children were naughty or nice. The nice kids received colored egg, candy and toys from the Easter Hare’s basket.

63. Croat or Serb : SLAV
The Slavic peoples are in the majority in communities covering over half of Europe. This large ethnic group is traditionally broken down into three smaller groups:

65. Kind of knife once touted in infomercials : GINSU
Ginsu knives are more famous for their hard-sell television ads than they are for their efficacy in the kitchen. The Ginsu phenomenon took off in the seventies when two brothers found a set of knives called “Eversharp” that were being manufactured in Ohio. The brothers changed the brand name to something more exotic, and Japanese in particular (Ginsu), and then produced ads that made references to Japanese martial arts. I think they made a fortune …

68. Envelope-pushing : EDGY
The phrase to “push the envelope” is a relatively recent one, only dating back to the 1970s. It was popularized in Tom Wolfe’s celebrated book “The Right Stuff”, as it was oft-quoted during the space program. The “envelope” in question was the “mathematical envelope” that had to be “pushed” in order to make the space program successful.

69. Stack at a rock concert : AMPS
An electric guitar, for example, needs an amplifier (amp) to take the weak signal created by the vibration of the strings and turn it into a signal powerful enough for a loudspeaker.

Down
1. Device with earbuds : IPOD
The iPod is Apple’s signature line of portable media players. It first hit the market in 2001, with a hard drive-based device that is now known as the iPod Classic. Later models all use flash memory, allowing a smaller form factor.

7. “Ooky” family cousin : ITT
In the television sitcom “The Addams Family”, the family had a frequent visitor called Cousin Itt. Itt is a short man with long hair that runs from his head to the floor. Cousin Itt was played by Italian actor Felix Silla.

10. Stumblebums : OAFS
A “stumblebum” is a clumsy and incompetent person. The term particularly applies to a second-rate prizefighter. Back in the 1930s, the term referred to a down-and-out alcoholic, a “bum” who “stumbled” around.

11. Tiny nuisance : GNAT
Gnats are attracted to the smell of rotting food, and to vinegar. Simple homemade traps that use vinegar are often constructed to attract and kill gnats.

14. Number of times the Twins have won the World Series, appropriately : TWO
The Minnesota Twins baseball team started out life as the Kansas City Blues in 1894, before becoming the Washington Senators in 1901. The team arrived in Minneapolis in 1961.

18. Flamenco cheers : OLES
Flamenco is a style of Spanish music and dance. The origin of the word “flamenco” isn’t clearly understood, but the explanation that seems most credible to me is that it comes from Flanders in Northern Europe. Given that “flamenco” is the Spanish word for “Flemish” and Flanders is home to the Flemish people it makes perfect sense, doesn’t it?

26. Desert bloomer : AGAVE
The agave is a succulent plant found mainly in Mexico. Surprisingly (to me, anyway), the agave is unrelated to the cactus and isn’t very closely related to the aloe plant either.

30. Mexican once ranked as the world’s richest man : CARLOS SLIM
Carlos Slim is a businessman from Mexico who was the richest person in the world from 2010 to 2013. Slim’s net worth is almost equivalent to 6% of Mexico’s gross domestic product.

36. Viva ___ (orally) : VOCE
“Viva voce” translates literally from Latin as “with living voice”, and we use the phrase today to mean “by word of mouth”. The term might also be used for an oral exam in university, or for a voice vote in a governing assembly.

41. Like women in Rubens paintings : BUXOM
Peter Paul Rubens was a Flemish painter who worked in the city of Antwerp in Belgium. When Rubens was 53-years-old, four years after the death of his first wife, he married a 16-year-old girl. It was his young wife who inspired many of the voluptuous figures with whom Rubens became associated later in his career. This style of painting gave rise to our term “rubenesque”, describing a voluptuous, attractive woman.

47. First king of Israel : SAUL
According to the Hebrew Bible, Saul was the first King of Israel and ruled from 1049 BC to 1007 BC. Saul’s story is mainly recounted in the Books of Samuel.

52. Old West transport : STAGE
Although the stagecoach is very much associated with the Wild West, the vehicle originated in England in the 16th century. Stagecoaches provided transportation for travellers and goods over long distances. The rest points for the travellers were known as “stages”, and later “stations”, hence the name “stagecoach”.

54. One-named singer whose name used to be spelled with a dollar sign : KESHA
Kesha (formerly “Ke$ha”) is the stage name used by singer Kesha Rose Sebert.

55. Ending of several central Asian country names : -STAN
The suffix “-stan” in many place names is Persian for “place of”. One example is “Pakistan”, the Place of the Pure. “Pakistan” is a relatively recent name, first coined in 1933. It comes from the abbreviation PAKSTAN, standing for Punjab – Afghan Province – Kashmir – Sindh – BaluchisTAN, all regions in the north of India. The “I” was added to Pakistan to make it easier to pronounce, and to fit the translation “Land of the Pure”.

58. Houston sch. : TSU
Texas Southern University (TSU) is a school in Houston. TSU was founded as the Houston Colored Junior College in 1927.

59. Wyatt of the Old West : EARP
The legendary Western gunfighter and lawman Wyatt Earp has been portrayed on the big and small screen many, many times. Kevin Costner played the title role in 1994’s “Wyatt Earp”, and Val Kilmer played Earp in 2012’s “The First Ride of Wyatt Earp”. Joel McCrea had the part in 1955’s “Wichita”, and Kurt Russell was Earp in 1993’s “Tombstone”.

60. Nervous nights, maybe : EVES
I guess the idea is that one might be nervous on the eve of a “big day”.