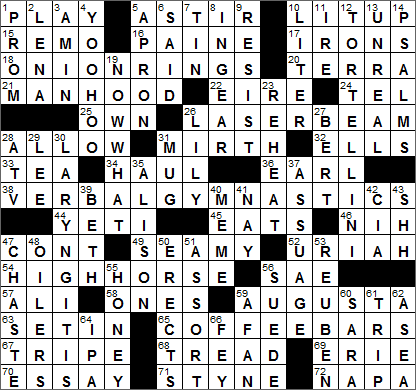 CROSSWORD SETTER: Gary Cee
THEME: Verbal Gymnastics … each of today’s themed answers ends with the name of a piece of gymnastics equipment:

Today’s Wiki-est, Amazonian Googlies
Across
1. iTunes button : PLAY
The iTunes Store now offers a “Complete My Album” service. The idea is that if someone already owns a track in an album, the balance of the album can be purchased at a discount.

15. San ___ (Italian resort) : REMO
The Italian city of San Remo sits on the Mediterranean, right on the border with France. In Italian the city is named Sanremo, just one word, although the spelling of “San Remo” dates back to ancient times.

16. Thomas who wrote “Common Sense” : PAINE
Thomas Paine was an English author who achieved incredible success with his pamphlet “Common Sense” published in 1776 which advocated independence of colonial America from Britain. Paine had immigrated to the American colonies just two years before his pamphlet was published, and so was just in time to make a major contribution to the American Revolution.

20. ___ cotta : TERRA
The name “terra cotta” comes to us from Latin via Italian and means “baked earth”. Terra cotta is a ceramic made from clay which is left unglazed. Maybe the most famous work in terra cotta is the Terracotta Army, the enormous collection of life-size figures that was buried with the Qin Shi Huang, the First Emperor of China around 210 BC. I had the privilege of seeing some of this collection when it toured the US a few years ago, and just the few pieces on display were so very impressive.

22. U2’s homeland : EIRE
Irish singer Bono is a Dubliner, born Paul David Hewson. As a youth, Hewson was given the nickname “Bono Vox” by a friend, a Latin expression meaning “good voice”, and so the singer has been known as Bono since the late seventies. His band’s first name was “Feedback”, later changed to “The Hype”. The band members searched for yet another name and chose U2 from a list of six names suggested by a friend. They picked U2 because it was the name they disliked least …

34. Schlep : HAUL
Our word “schlep” means “to carry, drag”. As one might expect, “schlep” comes from Yiddish, with “shlepen” having the same meaning.

36. British nobleman : EARL
In the ranking of nobles, an earl comes above a viscount and below a marquess. The rank of earl is used in the British peerage system and is equivalent to the rank of count in other countries. Other British ranks have female forms (e.g. marquess and marchioness, viscount and viscountess), but there isn’t a female word for the rank of earl. A female given the same rank as an earl is known simply as a countess.

44. Abominable Snowman : YETI
A yeti is a beast of legend, also called an abominable snowman. “Yeti” is a Tibetan term, and the beast is fabled to live in the Himalayan regions of Nepal and Tibet. Our equivalent legend in North America is that of Bigfoot, also known as Sasquatch. The study of animals whose existence have not yet been substantiated is called cryptozoology.

45. Noshes : EATS
Our word “nosh” has been around since the late fifties, when it was imported from the Yiddish word “nashn” meaning “to nibble”.

49. Disreputable : SEAMY
We’ve used “seamy” to mean “the least pleasant, the worst” since the 1600s. The idea comes from the seamed side of a sewn garment being the less attractive.

52. ___ Heep : URIAH
Uriah Heep is a sniveling insincere character in the novel “David Copperfield” by Charles Dickens. The character is such a “yes man” that today, if we know someone who behaves the same way, then we might call that person a “Uriah Heep”.

54. Snootiness : HIGH HORSE
The expression “on one’s high horse” stems from the fact that someone of rank tended to ride a “high horse” i.e. a war horse or a charger.

57. Gold medalist of 1960, under a previous name : ALI
Cassius Marcellus Clay, Jr. was born in 1942 in Louisville, Kentucky. Clay changed his name to Muhammad Ali when he converted to Islam in 1964. Who can forget Muhammad Ali lighting the Olympic flame for the 1996 games in Atlanta? Ali was presented with a gold medal during those ’96 Games, a replacement for the medal he won at the 1960 Olympics. He had thrown the original into the Ohio River as a gesture of disgust after being refused service at a “whites only” restaurant.

59. Maine’s capital : AUGUSTA
As well as being the easternmost, Augusta, Maine is the third smallest US state capital, with a population of under 20,000.

67. Claptrap : TRIPE
“Tripe” is an informal term meaning “rubbish, of little value”. Tripe is actually the rubbery lining of say a cow, that in the UK is traditionally eaten with onions.

70. Part of a G.E.D. exam : ESSAY
The General Educational Development (GED) tests are a battery of five tests designed to demonstrate that a student has the academic skills of someone who has graduated from an American or Canadian high school.

71. Broadway composer Jule : STYNE
Jule Styne was an English songwriter who made a name for himself in America with a series of popular musicals. Styne wrote a number of famous songs including “Don’t Rain on My Parade” from “Funny Girl”, “Diamonds Are a Girl’s Best Friend” from “Gentlemen Prefer Blondes”, and “Everything’s Coming Up Roses” from “Gypsy”.

Did you know that there are far more wine grapes produced in Sonoma than Napa? Within Sonoma County some of the more well-known appellations are Chalk Hill, Anderson Valley and Russian River Valley. Personally, when I want to visit the wine country, I head for the Russian River Valley as it’s far less crowded and much more fun than Napa Valley.

Down
2. Dunham of HBO’s “Girls” : LENA
Lena Dunham is a co-star in the HBO series “Girls”, and is also the show’s creator. Dunham garnered a lot of attention for herself during the 2012 US Presidential election cycle as she starred in ad focused on getting out the youth vote. In the spot she compared voting for the first time with having sex for the first time. I must say, I quite enjoy the show “Girls” …

3. Dictator Idi : AMIN
Idi Amin received most of his military training in the British armed forces, eventually achieving the highest rank possible for a Black African in the British Colonial Army in 1959, that of Warrant Officer. On his return to Uganda Amin joined his country’s military and quickly rose to the rank of Deputy Commander of the Army. During that time he was quite the athlete. He was a noted rugby player and swimmer, and for nine years held the Ugandan national light-heavyweight boxing title. By the early seventies, Amin was commander of all the armed forces of Uganda and in 1971 seized power in a military coup, displacing the country’s president Milton Obote. There followed seven years of brutal rule by Amin during which it is estimated that between 100,000 and 500,000 people were murdered. Amin was ousted from power in 1979 after a war with Tanzania, and fled to Libya where he stayed for a year. He then moved to Saudi Arabia, where he was financially supported by the Saudi Royal Family for the remainder of his life. Amin died in 2003.

12. Stuffed, rolled pasta : TORTELLINI
Tortellini are stuffed pasta that are ring-shaped, or navel shaped. In fact tortellini can also be called “umbellico”, the Italian for “belly button”.

14. Source of the line “The Lord is thy keeper” : PSALMS
The Greek word “psalmoi” originally meant “songs sung to a harp”, and gave us the word “psalms”.

29. Daniels who directed “The Butler” : LEE
“Lee Daniels’ The Butler” is a 2013 movie that is loosely based on the life of Eugene Allen, who worked at the White House for 34 years before retiring as head butler in 1986. Forest Whitaker plays the title role. My wife saw this one, and really enjoyed it. It has been on my list for quite a while now …

35. 27-time Grammy winner Krauss : ALISON
Alison Krauss is country singer/musician who has won a whole host of Grammy Awards. As of 2012, only the late classical conductor had won more Grammys, and only Quincy Jones has won as many.

40. Something trending online : MEME
A “meme” (short for “mineme”) is a cultural practice or idea that is passed on verbally or by repetition from one person to another. The term lends itself very well to the online world where links, emails, files etc. are so easily propagated.

48. Edmonton six : OILERS
The National Hockey League’s Edmonton Oilers are so called because they are located in Alberta, Canada … oil country.

53. Sandwich with sauerkraut : REUBEN
There are conflicting stories about the origin of the Reuben sandwich. One is that it was invented around 1914 by Arnold Reuben, an immigrant from Germany who owned Reuben’s Deli in New York.

56. Napped leather : SUEDE
Suede is leather made from the underside of the skin, mainly from a lamb. As such it is very soft, although not as durable as leather made from the exterior skin. The soft leather was, and is still used for making gloves. Back in 1859 these gloves were called “gants de Suede” in France, or “gloves of Sweden”. So, the name “suede” comes from the French word for Sweden.

60. Singer Bareilles : SARA
Sara Bareilles achieved success with her 2007 “Love Song” with the help of the iTunes online store. In one week in June of that year, iTunes offered the song as “free single of the week” and it quickly became the most downloaded song in the store, and from there climbed to the number spot in the charts.

64. Beer variety, familiarly : IPA
India Pale Ale is a style of beer that comes from England. The beer was originally intended for transportation from England to India, hence the name.