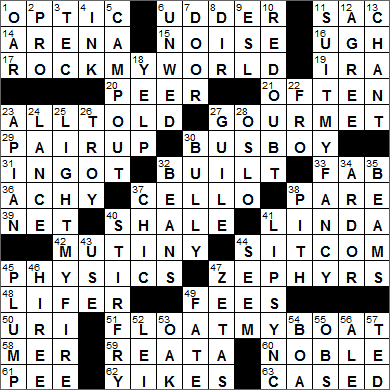 CROSSWORD SETTER: John Guzzetta
THEME: I Really Adore You! … each of today’s themed answers is a remark made by a someone who is smitten, with the remark suits that person’s profession:

Today’s Wiki-est, Amazonian Googlies
Across
11. Cul-de-___ : SAC
Even though “cul-de-sac” can indeed mean “bottom of the bag” in French, the term cul-de-sac is of English origin (the use of “cul” in French is actually quite rude). The term was introduced in aristocratic circles at a time when it was considered very fashionable to speak French. Dead-end streets in France are usually signposted with just a symbol and no accompanying words, but if words are included they are “voie sans issue”, meaning “way without exit”.

14. Coliseum : ARENA
Our word “coliseum”, meaning an arena, was first imported into English to describe a music hall in the early 1700s. The term is a variant of the Latin “Colosseum”, the huge amphitheater in Rome.

17. “You really ___!,” said the adoring seismologist : ROCK MY WORLD
Seismology is the study of earthquakes, from :”seismos”, the Greek for “shaking”,

27. Connoisseur of fine food : GOURMET
A gourmand is someone who takes great pleasure in consuming food and drink, often eating and drinking to excess. The related term “gourmet” refers to someone who has a refined palate.

30. Starting restaurant employee, maybe : BUSBOY
A busboy is a person who assists a waiter, mainly by clearing tables. The verb “to bus” arose in the early 1900s and is probably a reference to the wheeled cart that was used to carry dishes.

37. Larger cousin of a violin : CELLO
The word “cello” is an abbreviation for “violoncello”, an Italian word for “little violone”, referring to a group of stringed instruments that were popular up to the end of the 17th century. The name violoncello persisted for the instrument that we know today, although the abbreviation ‘cello was often used. Nowadays we just drop the apostrophe.

39. Ping-Pong table divider : NET
Ping-pong is called table tennis in the UK, where the sport originated in the 1880s. Table tennis started as an after-dinner activity among the elite, and was called “wiff-waff”. To play the game, books were stacked in the center of a table as a “net”, two more books served as “”rackets” and the ball used was actually a golf ball. The game evolved over time with the rackets being upgraded to the lids of cigar boxes and the ball becoming a champagne cork (how snooty is that?). Eventually the game was produced commercially, and the sound of the ball hitting the racket was deemed to be a “ping” and a “pong”, giving the sport its alternative name.

40. Mineral layer involved in fracking : SHALE
“Fracking” is a familiar term for “hydraulic fracturing”. Fracking involves the injection of chemicals and sand in water at high pressure into a wellbore. This creates cracks in layers of rock deep in the earth allowing perhaps oil or natural gas to flow more freely to the surface. I know someone who works for the US Geological Surface, and he’s measuring seismic activity in parts of the country where it has never been seen before. It seems that that fracking does have an impact on our environment after all …

41. Loma ___, Calif. : LINDA
Loma Linda is a city in California located not far from Los Angeles. The name Loma Linda translates from Spanish as “Beautiful Hill”.

42. Event on the Bounty : MUTINY
Charles Nordhoff and James Norman Hall wrote “Mutiny on the ‘Bounty'”, based on a true story. They followed up their successful novel with two more works, creating what is now called the “Bounty Trilogy”. The three books are:

44. “Modern Family” or “All in the Family” : SITCOM
“Modern Family” is a marvelous television show shown on ABC since 2009. The show’s format is that of a “mockumentary”, with the cast often addressing the camera directly. In that respect “Modern Family” resembles two other excellent shows: “The Office” and “Parks and Recreation”, both of which might also be described a “mockumentaries”.

“All in the Family” is an American sitcom, a remake of the incredibly successful BBC show called “Till Death Us Do Part”. Both the UK and US versions of the sitcom were groundbreaking in that the storyline brought into focus topics previously considered unsuitable for a television comedy, including racism, homosexuality, women’s liberation, menopause and impotence. “All in the Family” is one of only three TV shows that has topped the Nielsen ratings for five consecutive seasons (the other two are “The Cosby Show” and “American Idol”).

45. Field for Newton or Einstein : PHYSICS
Sir Isaac Newton was one of the most influential people in history, the man who laid the groundwork for all of classical mechanics. The story about an apple falling on his head, inspiring him to formulate his theories about gravity, well that’s not quite true. Newton often told the story about observing an apple falling in his mother’s garden and how this made him acutely aware of the Earth’s gravitational pull. However, he made no mention of the apple hitting him on the head.

47. Gentle winds : ZEPHYRS
A zephyr is a gentle breeze, traditionally a light wind from the west. The term comes from the Greek god of the west wind, who was called Zephyrus.

50. Spoon-bending Geller : URI
Uri Geller’s most famous performance is perhaps his uncomfortable failure on “The Tonight Show” with Johnny Carson in 1973. Carson “hi-jacked” Geller on live television by providing him with spoons to bend and watches to start, none of which had been available to Geller before the show aired. Clever!

59. Rodeo rope : REATA
“Reata” is the Spanish word for “lasso”. We tend to use the spelling “riata” in English, but sometimes can use the original Spanish word.

63. Examined before robbing : CASED
The term “case the joint” is American slang dating back at least to 1915, meaning to examine a location with the intent of robbing it. The origins of the phrase are apparently unknown.

Down
3. Sleuth, in old crime fiction : TEC
“Tec” is a slang term for a private detective, a private investigator (PI).

4. Quill fluid : INK
Quills have been used as writing implements since the 6th century. Historically, goose, swan and turkey feathers have been the quills of choice. A bird’s feather is well suited for writing, as the hollow shaft acts as a reservoir for ink which then flows to the tip due to capillary action. Choice of feather is important. Right-handed writers are best served by feathers from the left wing, as the feather curves away from the palm of the hand when writing. The tip of the quill is sharpened using a “quill knife”. This quill knife is the ancestor of what we know today as a “penknife”.

5. Activity with a tent and s’mores : CAMP OUT
S’mores are a treat peculiar to North America, usually eaten around a campfire. A s’more consists of a roasted marshmallow and a layer of chocolate sandwiched between two graham crackers. The earliest written reference to the recipe is in a 1927 publication called “Tramping and Trailing with the Girl Scouts”. Girl Scouts always did corner the market on cookies and the like!

9. Class for some immigrants, for short : ESL
English as a Second Language (ESL) is sometimes referred to as English for Speakers of Other Languages (ESOL) and English as a Foreign Language (EFL).

10. Fortress : REDOUBT
A redoubt is a system of fortifications that surround a larger fort. The redoubt is used to protect soldiers stationed outside the main fort, and to provide additional defenses. The term “redoubt” (originally “redout”) means “place of retreat”.

18. Website for customer reviews : YELP
yelp.com is a website that provides a local business directory and reviews of services. The site is sort of like Yellow Pages on steroids, and the term “yelp” is derived from “yel-low p-ages”.

26. “Iliad” locale : TROY
“Iliad” is an epic poem by the Greek poet Homer, which tells the story of the siege of Ilium (also known as Troy) during the Trojan war.

28. Norway’s capital : OSLO
Oslo, the capital of Norway, is an ancient city that was founded around 1048. The medieval city was destroyed by fire in 1624 and was rebuilt by the Danish-Norwegian king Christian IV and renamed to Christiana. In 1877 there was an official change of the spelling of the city’s name to “Kristiana”, and then more recently in 1925 the name was restored to the original Oslo. Things have almost gone full circle and now the center of Oslo, the area that would have been contained by the original medieval walls, has apparently been renamed to Christiana.

32. Garbanzos, e.g. : BEANS
The garbanzo, or chickpea, is absolutely my favorite legume to eat.

40. Go for a wok, say? : STIR-FRY
“Wok” is a Cantonese word, the name for the frying pan now used in many Asian cuisines.

47. Z Z Z, to Greeks : ZETAS
Zeta is the sixth letter of the Greek alphabet, and is a precursor of our Roman letter Z. The word “zeta” is also the ancestor of the name “zed”, which became “zee”, the pronunciation that we use here in the US.

54. Cousin of a python : BOA
Boa constrictors are members of the Boidae family of snakes, all of which are non-venomous. Interestingly, the female boa is always larger than the male.

56. Ginger ___ : ALE
The brand most closely associated with ginger ale is Canada Dry. “Canada Dry Pale Ginger Ale” was first formulated in 1904 by a Canadian chemist called John McLoughlin from Ontario. Prohibition in the United States helped sales of the drink as it was particularly effective in masking the taste of illegally-produced homemade liquor.

57. Sen. Cruz : TED
US Senator Ted Cruz served as Solicitor General for the state of Texas before heading to Washington. Cruz was appointed Solicitor General in 2003 at the age of 32, making him the youngest Solicitor General in the country. Famously, Cruz is an opponent of the Affordable Care Act and made a speech in 2013 in the US Senate on the subject that lasted for 21 hours and 19 minutes. It was the fourth longest speech in the history of the Senate.