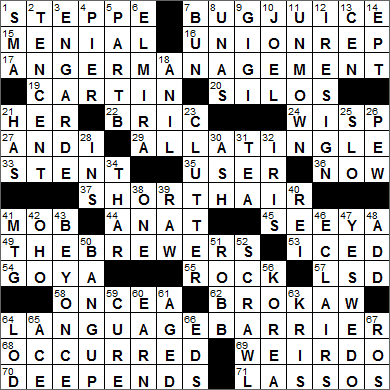 CROSSWORD SETTER: Dan Schoenholz
THEME: Language Barrier … each of today’s themed answers contains a hidden word, and that word is a LANGUAGE:

Today’s Wiki-est, Amazonian Googlies
Across
1. Eurasian plain : STEPPE
A steppe is a grassland, devoid of trees apart from those growing near rivers and lakes. We would likely call such a geographic feature a prairie in this country.

7. Sugary punch, slangily : BUG JUICE
“Bug juice” is a slang term for a really sweet juice drink that is artificially flavored, like Kool-Aid.

15. Like McJobs : MENIAL
“McJob” is a slang term for a low-paying position that offers little chance for advancement. The term of course comes from front-line jobs at a McDonald’s fast-food restaurant.

20. Storage buildings with elevators : SILOS
Silo is a Spanish word that we absorbed into English, originally coming from the Greek word “siros” that described a pit in which one kept grain.

22. ___-a-brac : BRIC
Bric-a-brac is a French phrase (actually “bric-à-brac”) that was used as far back as the 16th century. Back then it was a nonsense term meaning “at random” or “any old way”. Since Victorian times we have used the phrase in English to mean a collection of curios, statues and the like. In modern usage, bric-a-brac tends to be a selection of cheaper items.

33. Cardiologist’s insert : STENT
In the world of medicine and surgery, a stent is an artificial tube inserted inside a vessel in the body, say an artery, so that it reduces the effects of a local restriction in the body’s conduit.

44. Veterinary school subj. : ANAT
“Vet” is an abbreviation for “veterinarian”, a professional who treat animals for disease and injury. The word “veterinary” comes from the Latin “veterinae” meaning “working animals, beasts of burden”.

49. Miller Park crew : THE BREWERS (hiding “Hebrew”)
“The Brew Crew” is a nickname of the Milwaukee Brewers baseball team.

The Brewers are Milwaukee’s professional baseball team, and they play at Miller Park. Miller Park was completed in 2001. The stadium has the country’s only fan-shaped convertible roof, and it can open and close in under ten minutes.

54. They know beans : GOYA
Goya Foods is a supplier of food products headquartered in Secaucus, New Jersey. The company was founded in 1936 by two immigrants from Spain.

55. Loser to paper : ROCK
Rock-paper-scissors is a hand game played by two people, at least here in North America. Back in Ireland we called the game “scissors-paper-stone”. The game is often used as a way to choose between two options or two people.

57. Something to trip on : LSD
LSD (colloquially known as “acid”) is short for lysergic acid diethylamide. A Swiss chemist called Albert Hofmann first synthesized LSD in 1938 in a research project looking for medically efficacious ergot alkaloids. It wasn’t until some five years later when Hofmann ingested some of the drug accidentally that its psychedelic properties were discovered. Trippy, man …

62. NBC anchor before Williams : BROKAW
Tom Brokaw is a much-respected television journalist mostly seen on NBC. Brokaw is also the author of the excellent 1998 history of WWII and its aftermath called “The Greatest Generation”.

Brian Williams is currently the anchor of NBC’s “Nightly News”. Williams did not graduate from college, and instead left school to take an internship spot with the administration of President Jimmy Carter. Although Williams has done very well for himself, he does say that he regrets not having finished college. Stay in school, kids …

71. Ropes in : LASSOS
Our English word “lasso” comes from the Spanish “lazo”, and ultimately from the Latin “laqueum” meaning “noose, snare”.

3. Fighting words, of sorts : EN GARDE
“En garde” is a French term that has been absorbed into the sport of fencing. Originally a warning “on guard!”, it is spoken at the start of an encounter to warn the fencers to take a defensive position.

5. Medicare component : PART B
Medicare is divided into four parts:

6. Twain’s New York burial place : ELMIRA
Elmira is a city in the southern tier of New York State located closed close to the border with Pennsylvania. Elmira was also the family home of Olivia Langdon, wife of Samuel Clemens (aka Mark Twain). Mark Twain and family are buried in Elmira’s Woodlawn Cemetery.

7. Brat holder : BUN
A bratwurst (sometimes “brat” in the US) is a German sausage.

9. Caron title role of 1958 : GIGI
In the lovely musical film “Gigi”, released in 1958, the title song is sung by Louis Jourdan who plays Gaston. My favorite number though, has to be “Thank Heaven for Little Girls” sung by Maurice Chevalier. Many say that “Gigi” is the last in the long line of great MGM musicals. It won a record 9 Academy Awards, a record that only lasted one year. Twelve months later “Ben Hur” won 11 Oscars. In the 1958 film, Gigi was played by the lovely Leslie Caron. A few years earlier, “Gigi” was a successful stage play on Broadway. Chosen for the title role on stage was the then-unknown Audrey Hepburn.

10. Billy a.k.a. the Piano Man : JOEL
Billy Joel is the third-best selling solo artist in the US, after Elvis Presley and Garth Brooks. Joel’s name has been associated with two supermodels in his life. He dated Elle Macpherson, and wrote two songs about their relationship: “This Night” and “And So It Goes”. Joel’s second wife was Christie Brinkley, to whom he was married from 1985 to 1994. Brinkley appeared in the title role in the music video for “Uptown Girl”.

14. Competent, facetiously : EPT
If one is capable, one might jokingly be described as “ept”, the opposite of “inept”.

18. Indigo source : ANIL
Anil is another name for the indigo plant, as well as the name for the blue indigo dye that is obtained from it. The color of anil is relatively close to navy blue. The main coloring agent in indigo dye is a crystalline powder called indigotin.

25. ___ Poke (classic candy) : SLO
Slo Pokes are a brand of candy, described as caramel on a stick, made by the Gilliam Candy Company.

26. Seat for a service : PEW
A pew is a bench in a church, usually with a high back. The original pews were raised and sometimes enclosed seats in the church used by women and important men or families. “Pew” comes from the Old French “puie” meaning “balcony, elevation”.

32. Body part used in some recognition systems : IRIS
The iris is the colored part of the eye with an aperture in the center that can open or close depending on the level of light hitting the eye.

40. Big name in outdoor gear : REI
REI is acronym used by the sporting goods store called Recreational Equipment Inc. REI was founded in Seattle by Lloyd and Mary Anderson in 1938 as a cooperative that supplies quality climbing gear to outdoor enthusiasts. The first full-time employee hired by the Andersons was Jim Whittaker, who was the American to climb Mount Everest.

43. Music star with an accent in her name : BEYONCE
Beyoncé Knowles established herself in the entertainment industry as the lead singer with the R&B group Destiny’s Child. She launched her solo singing career in 2003, two years after making her first appearance as an actor. In 2006 she played the lead in the very successful movie adaptation of the Broadway musical “Dreamgirls”. Beyoncé is married to rap star Jay-Z.

46. Oblong pastries : ECLAIRS
The name for the pastry known as an éclair is clearly French in origin. The French word for lightning is “éclair”, but no one seems to be too sure how it came to be used for the rather delicious bakery item.

51. L.B.J. in-law : ROBB
Chuck Robb is a former Governor of Virginia and former US Senator. Robb is married to Lynda Bird Johnson Robb, the daughter of former President Lyndon B. Johnson. The couple were married in the White House in December 1967.

56. Home to Samsung : KOREA
Samsung is huge multinational company based in Seoul, South Korea. We tend to think of Samsung as a supplier of consumer electronics perhaps, but the company is into so much more. Samsung Heavy Industries is the world’s second-biggest shipbuilder, and Samsung Techwin is a major manufacturer of aeronautic and weapons systems. The name “Samsung” means “three stars” in Korean.

63. Jenner of reality TV : KRIS
Kris Kardashian is the matriarch of the Kardashian clan. She was married to the lawyer Robert Kardashian who was one of O. J. Simpson’s lawyers in his 1995 murder trial. The couple divorced in 1990 and Kris is now married to the famed decathlete from the 1976 Olympic Games, Bruce Jenner.

67. Children’s author Asquith : ROS
Ros Asquith writes the “Teenage Worrier” books aimed at teens, as well as cartoons for “The Guardian” newspaper in the UK.