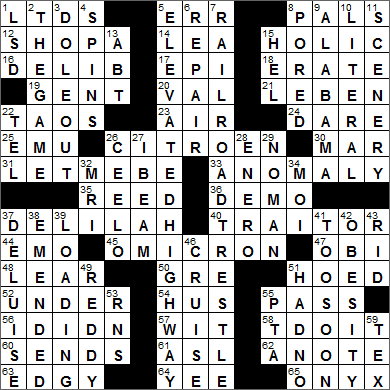 Note: I solved this crossword using a version of the puzzle that I downloaded from the “New York Times” website. The numbering of clues may differ from the version printed in the newspaper.

CROSSWORD SETTER: Jason Flinn
THEME: Underpass … today’s grid design features an UNDERPASS running from top to bottom down the center. Six of the across-answers are in two parts and are read by joining the two parts together, as if they slip beneath the UNDERPASS:

Today’s Wiki-est, Amazonian Googlies
Across
1. Former Ford full-sizes : LTDS
There has been a lot of speculation about what the abbreviation LTD stands for in the car model known as “Ford LTD”. Many say it is an initialism standing for Luxury Trim Decor, and others say that it is short for “limited”. Although the car was produced in Australia with the initialism meaning Lincoln Type Design, it seems LTD was originally chosen as just three meaningless letters that sound well together.

8. Huck Finn and Tom Sawyer, e.g. : PALS
“The Adventures of Huckleberry Finn” by Mark Twain was first published in 1884, not here in the US but rather in England. The original launch planned for the US had to be delayed until the following year because some rascal had defaced the plate for one of the illustrations, making an obscene joke. Once the problem was spotted a new plate had to be made, and 30,000 copies already printed had to be reworked to cover up the obscenity.

Tom Sawyer is a favorite character created by Mark Twain. He turns up in four of Twain’s books:

But that’s not all, as Tom appears in at least three works that Twain left unfinished:

17. Commercial start for Pen : EPI
EpiPen is a brand name of epinephrine auto-injector. An EpiPen delivers a measured dose of epinephrine, usually for the treatment of an allergic reaction.

20. ___-de-Marne (French department) : VAL
Val-de-Marne is department of France located southeast of Paris that takes its name from the Marne river.

22. New Mexico county or its seat : TAOS
The city of Taos, New Mexico is named for the Native American village nearby called Taos Pueblo. Taos is famous for its art colony. Artists began to settle in Taos in 1899, and the Taos Society of Artists was founded in 1915.

25. Big bird : EMU
Emu eggs are very large, with a thick shell that is dark-green in color. One emu egg weighs about the same as a dozen chicken eggs.

26. First mass-production auto company outside the U.S. : CITROEN
André-Gustave Citroën was a Parisian industrialist who founded the Citroën automotive company in 1919, which became the fourth-largest manufacturer of automobiles by the 1930s. Citroën was also quite the gambler and his huge losses eventually led to his company going bankrupt and being taken over by Michelin, the enterprise that provided the tires for the Citroën cars.

35. Epitome of thinness : REED
The more common meaning of “epitome” is a perfect example of a group, quality, type etc. An “epitome” is also an abstract or summary of a book or article.

36. Start of a massive renovation, for short : DEMO
Demolition (demo)

37. Biblical betrayer : DELILAH
Delilah is a Biblical figure, the wife of Samson. Delilah was engaged by the Philistines to betray her husband by determining the secret of his great strength. Samson lied to his wife three times, but on the fourth asking he told his wife the truth, that he did not cut his hair. Delilah then persuaded Samson to shear his locks and so allowed him to be captured by his enemies. Over the centuries, it has been usual to depict Delilah actually cutting off her husband’s hair, but the Bible actually says that she persuaded Samson to do the job himself.

47. Open kimono preventer : OBI
The sash worn as part of traditional Japanese dress is known as an obi. The obi can be tied in what is called a butterfly knot.

48. “I am a man more sinn’d against than sinning” speaker : LEAR
Shakespeare was inspired to write his famous drama “King Lear” by the legend of “Leir of Britain”, the story of a mythological Celtic king.

50. It has an analytical writing component, for short : GRE
Passing the Graduate Record Examination (GRE) is usually a requirement for entry into graduate school here in the US.

54. Czech reformer Jan : HUS
Jan Hus was Czech priest, famous today for having been burnt at the stake in 1415 as he was deemed guilty of heresy against the Catholic Church. Hus was an important contributor to Protestantism, over 100 years before Martin Luther made his famous proclamations.

61. One way to see a talk, for short? : ASL
It’s really quite unfortunate that American Sign Language (ASL) and British Sign Language (BSL) are very different, and someone who has learned to sign in one cannot understand someone signing in the other.

63. Avant-garde : EDGY
People described as being avant-garde are especially innovative. “Avant-garde” is French for “advance guard”.

65. Material used in many high-end chess sets : ONYX
Onyx is a form of quartz that comes in many different shades, but most often it’s the black version that’s used for jewelry. The name “onyx” comes from the Greek word for “fingernail”, as onyx in the flesh color is said to resemble a fingernail.

Down
1. Flashback cause, maybe : LSD
LSD (colloquially known as “acid”) is short for lysergic acid diethylamide. A Swiss chemist called Albert Hofmann first synthesized LSD in 1938 in a research project looking for medically efficacious ergot alkaloids. It wasn’t until some five years later when Hofmann ingested some of the drug accidentally that its psychedelic properties were discovered. Trippy, man …

6. Withdraw (to) : REPAIR
The verb “to repair”, meaning “to go, withdraw”, comes from the Latin “repatriare” that translates as “return to one’s own country”. “Repatriare” also gives us our verb “repatriate”.

7. Another reason for a 52-Across : RAILROAD TRESTLE
A trestle is a frame that is used as a support, particularly for a bridge.

9. One side in college football’s Iron Bowl : ALABAMA
The Iron Bowl is an annual football game played between the University of Alabama’s Crimson Tide and Auburn University’s Tigers. The game was played in Birmingham, Alabama for most of the 20th century (as was the 1893 inaugural game). It was Birmingham’s traditional association with the steel industry that led to the name “Iron Bowl”.

13. N.Y.C.-based dance group : ABT
The American Ballet Theatre (ABT) is a dance company based in New York City that was once led by Mikhail Baryshnikov.

15. Daughter of Loki : HEL
Hel is a being from Norse Mythology who presides over a realm that is also called Hel. The underworld of Hel receives many of the dead, and the term “go to Hel” is used in Norse accounts to mean “to die”.

26. Green formerly of “The Voice” : CEELO
CeeLo Green is the stage name of rapper Thomas DeCarlo Callaway. Apparently Green is one of the coaches for the contestants on the singing TV show “The Voice”. That’s all I need to know …

28. Summer time in Buenos Aires : ENERO
In Spanish, a year (año) starts in January (enero) and ends in December (diciembre).

Buenos Aires is the capital of Argentina, located on the estuary of the Ria de la Plata. As a port city, the people of Buenos Aires are known as porteños (“people of the port”).

29. Another name for Odysseus : NOMAN
According to Greek mythology, Odysseus and some of his men were trapped in a cave by the great Cyclops Polyphemus. The prisoners managed to drive a pole into Polyphemus’s eye, blinding him. The cyclops screamed, “Who has done this to me?” Odysseus replied, “I am Noman, and Noman has done this to you!” As the men finally make their escape, Odysseus shouts back to Polyphemus, “I am not Noman, but Odysseus, ruler of Ithaca. Tell everyone that I, Odysseus, blinded the mighty Polyphemus!”

32. Hosp. procedure : MRI
A CT (or “CAT”) scan produces (via computer manipulation) a three dimensional image of the inside of an object, usually the human body. It does so by taking a series of two dimensional x-ray images while rotating the camera around the patient. The issue with CT scans is that they use x-rays, and high doses of radiation can be harmful causing damage that is cumulative over time. An MRI on the other hand (Magnetic Resonance Imaging), uses powerful magnetic fields to generate its images so there is no exposure to ionizing radiation (such as X-rays). We used MRI equipment in our chemistry labs at school, way back in the days when the technology was still called Nuclear Magnetic Resonance Imaging (NMRI). Apparently the marketing folks didn’t like the term “nuclear” because of its association with atomic bombs, so now it’s just called MRI.

37. Co-star of “The Cannonball Run,” 1981 : DELUISE
Dom DeLuise was of course a talented comic actor, and an avid cook. DeLuise wrote several books on cooking and appeared regularly on radio cooking shows. He also wrote a few children’s books.

42. Michelle Obama campaign target : OBESITY
The First Lady plays the lead role in the Obama administration’s initiative to reverse the trend of childhood obesity. Ms. Obama has named the movement “Let’s Move!” As part of the initiative, the White House now has a famous Kitchen Garden, something last seen when Eleanor Roosevelt was First Lady.

Michelle Obama nee Robinson grew up on the South Side of Chicago and is sister to Craig Robinson, the coach of men’s basketball at Oregon State University. After graduating from Harvard Law School, Michelle Robinson worked as an associate at the Chicago office of the Sidley Austin law firm. Barack Obama joined the firm as a summer associate and Michelle Robinson was assigned to mentor him, and as they say, one thing led to another …

49. “I Am Woman” singer : REDDY
The successful singer Helen Reddy was born in Melbourne, Australia. In 1966, Reddy won a talent contest, and earned herself a trip to New York City for an audition. The 25-year-old single mother decided to stay in the US, and a few years later was able to launch a successful singing career. Her hit song “I Am Woman”, released in 1972, was the first recording by an Australian artist to reach #1 in the US charts.

53. Urgent care workers, for short : RNS
Registered nurses (RNs) might be found in an operating room (OR) or emergency room (ER).

59. Big ___ (Dallas fair icon) : TEX
Big Tex is a 55-foot tall statue of a cowboy located at Fair Park in Dallas, home of the State Fair of Texas. Big Tex started out as a 49-foot tall Santa Claus (billed as the “World’s Largest Santa Claus”) in Kerens, Texas in 1949. Two years later, Santa was “reworked” and turned into Big Tex. Sadly, on Big Tex’s 60th birthday in 2012, the statue went up in flames in a fire caused by a faulty electrical panel located under the cowboy’s right boot. A bigger and better Big Tex was revealed in 2013, built at the cost of half a million dollars.