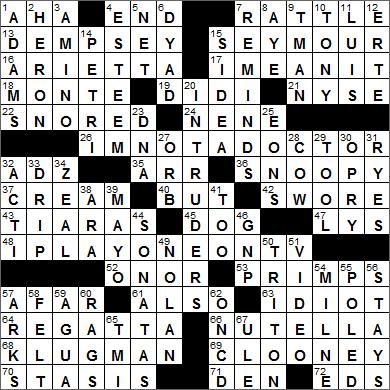 CROSSWORD SETTER: Robyn Weintraub
THEME: Doctors, Sort of … today’s grid contains four actors who have famously played doctors on television. And, we have a famous line from someone playing a doctor in commercials:

Today’s Wiki-est, Amazonian Googlies
Across
1. Cry after an epiphany : AHA!
An “epiphany” is an appearance or manifestation, especially of a supreme being. By extension, “epiphany” can also apply to a sudden insight or intuitive perception. The term derives from the Greek “epiphainein” meaning “to manifest, display”.

15. *Actress Jane who was a “Medicine Woman” : SEYMOUR
The lovely English actress Jane Seymour was born Joyce Frankenberg. She chose her stage name after the third wife of King Henry VIII. Although Seymour has had many respected performances on the big screen, she is also famous for playing the title role on the US television show “Dr. Quinn, Medicine Woman”.

16. Short opera piece : ARIETTA
An arietta quite simply is a short aria.

18. Three-card hustle : MONTE
Three-card Monte is a confidence trick in which someone is goaded into betting money on the assumption that he or she can find the “money card” (usually a queen) among three cards placed face down. The “mark” who is being duped has all sorts of ways to lose and there are usually several people in on the scam, including others playing who seem to be winning.

21. Wall St. initials : NYSE
The roots of the New York Stock Exchange (NYSE) go back to 1792 when a group of 24 stock brokers set up the New York Stock & Exchange Board. They did so in an agreement signed under a buttonwood tree outside 68 Wall Street. That document became known as the Buttonwood Agreement.

24. Hawaii’s state bird : NENE
The bird called a nene is a native of Hawaii, and is also known as the Hawaiian goose. The name “nene” is imitative of its call. When Captain Cook landed on the islands in 1778, there were 25,000 nene living there. By 1950, the number was reduced by hunting to just 30 birds. Conservation efforts in recent years have been somewhat successful.

32. Wood shaper : ADZ
An adze (also adz) is similar to an axe, but is different in that the blade of an adze is set at right angles to the tool’s shaft. An axe’s blade is set in line with the shaft.

36. Brown beagle? : SNOOPY
The Beagle breed of dog is a scent hound, developed for tracking small game. Because of this characteristic, Beagles are often used as detection dogs in customs halls around the world. The world’s most famous Beagle is probably Charlie Brown’s Snoopy, from the comic strip “Peanuts”.

64. Offshore race : REGATTA
The word “regatta” is Venetian dialect and was originally used to describe boat races among the gondoliers of Venice on the Grand Canal back in the mid-1600s.

66. Chocolaty spread since 1964 : NUTELLA
Nutella is a delicious hazelnut chocolate spread made by Ferrero, a company based in Italy. Sadly, 70% of the Nutella recipe is saturated fat and processed sugar.

68. *Actor Jack who was “Quincy” : KLUGMAN
Jack Klugman was an actor, most famous perhaps for his television roles. He played Oscar Madison in the “The Odd Couple” alongside Tony Randall, and he also played the title role in “Quincy, M.E.” On the big screen, Klugman did a marvelous job as one of the jurors in the 1957 classic “12 Angry Men”.

69. *”ER” actor George : CLOONEY
The actor George Clooney’s breakthrough role was playing Dr. Doug Ross on TV’s “ER”, although before that he had a fairly regular role on the sitcom “Roseanne”. George’s aunt was the singer and actress Rosemary Clooney.

3. Acid in proteins, informally : AMINO
Amino acids are essential to life in many ways, not least of which is their use as the building blocks of proteins.

9. Counterfeiter fighter : T-MAN
A T-man is a law-enforcement agent of the US Treasury (the “T” stands for Treasury).

10. U.S. equivalent to the U.K.’s Laurence Olivier Award : TONY
The full name for the Tony Award is the Antoinette Perry Award for Excellence in Theatre. Antoinette Perry was an American actress and co-founder of the American Theatre Wing, one of the organizations that selects the award recipients.

Laurence Olivier has to be one of the most respected actors to come out of England in the 20th century. He had tremendous impact on stage and screen, and was never short of work on either side of the Atlantic. While working in the British film industry just before WWII, Olivier met actress Vivien Leigh. The two were already married but started an affair. Olivier travelled to Hollywood as he was cast as Heathcliff in “Wuthering Heights”, his big break in Hollywood. Leigh followed him, and found herself cast as Scarlett O’Hara in “Gone with the Wind”. The couple took Hollywood by storm, and eventually unraveled their prior marriages so that they could wed, in 1940.

11. San ___ Obispo, Calif. : LUIS
The city of San Luis Obispo is one of the oldest communities in California. The name “San Luis Obispo” translates as “Saint Louis, the Bishop of Toulouse”. In 1990, San Luis Obispo was the first municipality in the world to ban smoking in all indoor public areas.

14. ___ dish : PETRI
Julius Richard Petri was a German bacteriologist and was the man after whom the Petri dish is named. The petri dish can have an agar gel on the bottom which acts a nutrient source for the specimen being grown and studied, in which case the dish plus agar is referred to as an “agar plate”.

15. “I Want to Hold Your Hand” through “All My Loving,” on “Meet the Beatles!” : SIDE A
The cover of the 1964 album “Meet the Beatles!” describes itself as the “first” album the group released in the US. In fact, the first Beatles album was “Introducing… The Beatles”, which was released a few months earlier.

23. ___ lab : DNA
I’ve always been fascinated by the fact that the DNA of living things is so very similar across different species. Human DNA is almost exactly the same for every individual (to the degree of 99.9%). However, those small differences are sufficient to distinguish one individual from another, and to determine whether or not individuals are close family relations.

30. Nashville site, familiarly : OPRY
“The Grand Ole Opry” started out as a radio show in 1925 originally called the WSM “Barn Dance”. In 1927, the “Barn Dance” radio show was broadcast in a slot after an NBC production called “Musical Appreciation Hour”, a collection of classical works including Grand Opera. In a December show, the host of “Barn Dance” announced, “For the past hour, we have been listening to music taken largely from Grand Opera. From now on we will present the ‘Grand Ole Opry'”. That name was used for the radio show from then on.

31. Bartender’s stock : RYES
For whiskey to be labelled as “rye” in the US, it has to be distilled from at least 51% rye grain. In Canada however, a drink called rye whiskey sometimes contains no rye at all.

33. Reason to call a plumber : DRIP
“Plumbum” is the Latin for lead, explaining why the symbol of the element in the Periodic Table is “Pb”. It also explains why the original lead weight on the end of a line used to check vertical was called a “plumb line”. And, as pipes were originally made of lead, it also explains why we would call in a “plumber” if one of them was leaking.

34. Gusto : ZEAL
“Gusto” is an Italian word meaning “taste”. We use it in the sense of “with gusto”, with great enjoyment.

39. Potato salad ingredient, informally : MAYO
Mayonnaise originated in the town of Mahon in Menorca, a Mediterranean island belonging to Spain. The Spanish called the sauce “salsa mahonesa” after the town, and this morphed into the French word “mayonnaise” that we use in English today.

Ludwig van Beethoven is one of my favorite composers from the Classical period. There are two excellent films that showcase his music and give fictionalized yet entertaining accounts of different aspects of his life: “Immortal Beloved” (1994) that speculates on the identity of one of Beethoven’s lovers, and “Copying Beethoven” (2006) that explores the events leading up to the triumphant premiere of his 9th Symphony.

46. Econ. indicator : GNP
A country’s Gross National Product (GNP) is the value of all services and products produced by its residents in a particular year. GNP includes all production wherever it is in the world, as long as the business is owned by residents of the country concerned. Gross Domestic Product (GDP) is different, and is the value of all services and goods produced within the borders of the country for that year.

49. Hall-of-Fame pitcher Ryan : NOLAN
Nolan Ryan is famous for having more career strikeouts that any other baseball pitcher. However, he also holds the record for the most career walks and wild pitches. Another record that Ryan holds is the most no-hitters, a total of seven over his career.

50. King in “The Little Mermaid” : TRITON
“The Little Mermaid” is a 1989 animated feature from Disney that is based on the Hans Christian Andersen fairy tale of the same name. It tells the story of a mermaid princess called Ariel who falls in love with the human Prince Eric. Ariel’s father is chief merman King Triton.

54. Kanga and Roo creator : MILNE
Kanga is a friend of A. A. Milne’s “Winnie-the-Pooh”, and is a kangaroo. She is the mother of Roo, who appears more frequently in the storyline.

57. Temple receptacles : ARKS
The Torah ark is found in a synagogue, and is the ornamental container in which are stored the Torah scrolls. The word “Torah” best translates as “teaching”, I am told.