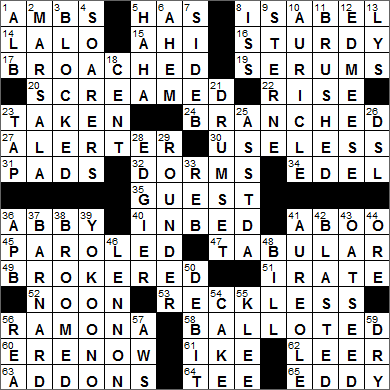 CROSSWORD SETTER: Pawel Fludzinski
THEME: In Bed … each of today’s themed answers is hidden away inside the word BED. The result from placing the answer into BED is another common word, one startign with a B and ending with ED:

8. Novelist Allende : ISABEL
Isabel Allende is a Chilean writer, apparently the world’s most widely-read, Spanish-language author. Isabel is related to Salvador Allende, the ex-President of Chile.

14. Composer Schifrin : LALO
Lalo Schifrin is an Argentine pianist and composer best-known for writing film and television scores. Famously, Schifrin wrote the theme for “Mission: Impossible”, but also for “The Man from U.N.C.L.E.”, “Mannix” and “Starsky and Hutch”.

19. Some shots : SERUMS
Blood serum is the clear, yellowish part of blood i.e. that part which is neither a blood cell or a clotting factor. Included in blood serum are antibodies, the proteins that are central to our immune system. Blood serum from animals that have immunity to some disease can be transferred to another individual, hence providing that second individual with some level of immunity. Blood serum used to pass on immunity can be called “antiserum”.

23. 2008 action thriller with Liam Neeson : TAKEN
“Taken” is a fabulous thriller movie released in 2008. It stars Liam Neeson as kind of an older James Bond-ish character, and he is great in the role. “Taken 2” followed in 2012 and it wasn’t a bad sequel, I must say …

24. *Dressing choice : B(RANCH)ED
Ranch dressing has been the best selling salad dressing in the country since 1992. The recipe was developed by Steve Henson who introduced it in the fifties to guests on his dude ranch, Hidden Valley Ranch in Northern California. His ranch dressing became so popular that he opened a factory to produce packets of ranch seasoning that could be mixed with mayonnaise and buttermilk. Henson sold the brand for $8 million in 1972.

31. Homes, colloquially : PADS
Back in the 16th century a “pad” was a bundle of straw to lie on, and came to mean a “sleeping place” in the early 1700s. The term was revitalized in the hippie era.

32. Campus digs : DORMS
“Digs” is short for “diggings” meaning “lodgings”, but where “diggings” came from, no one seems to know.

36. “Dear” one : ABBY
The advice column “Dear Abby” first appeared in 1956. Pauline Phillips was Abby back then, but now the column is written by Jeanne Phillips, her daughter. The full name of the “Abby” pen name is Abigail Van Buren, which Pauline Phillips came up with by combining “Abigail” from the biblical Book of Samuel, and “Van Buren” after the former US president.

45. Released early : PAROLED
The term “parole” is a French word that we use in English, with the French “parole” meaning “word, speech”. Of particular interest is the French phrase “parole d’honneur” which translates as “word of honor”. In the early 1600s we started using “parole” to mean a promise by a prisoner of war not to escape, as in the prisoner giving his “word of honor” not to run off. Over time, parole has come to mean conditional release of a prisoner before he or she has served the full term of a sentence.

49. *Longtime TV weatherman : B(ROKER)ED
Al Roker is best known as the meteorologist on the “Today” show on NBC. He has successfully branched out from that platform though, and even co-wrote a novel called “The Morning Show Murders”, about a celebrity chef and TV host who get entangled in mystery. Topical stuff …

52. Eight bells, maybe : NOON
Our word “noon”, meaning “midday”, comes from the Latin “nona hora” that translates as “ninth hour”. Back in Ancient Rome, the “ninth hour” was three in the afternoon. Over the centuries, traditions such as church prayers and “midday” meals shifted from 3 p.m. to 12 p.m., and so “noon” became understood as 12 noon.

On board a seagoing vessel, there is a system of watches, when a specific compliment of the crew is on duty. Most of the watches last for four hours (the exception are the two dog watches, that last for two hours each). During each watch, the ship’s bell is sounded every 30 minutes, starting with “one bell” thirty minutes into the watch, and finishing with eight bells that signals the end of the watch.

56. ___ Quimby (Beverly Cleary heroine) : RAMONA
Ramona Quimby is a character in a series of “Henry Huggins” children’s novels penned by Beverly Cleary. As Ramona aged, she merited her own set of stories.

61. Mamie’s man : IKE
President Eisenhower was born in Denison, Texas and given the name David Dwight Eisenhower, but by the time he made it to the White House he was going by the name Dwight D. Eisenhower. Growing up, his family called him Dwight, and when “Ike” enrolled in West Point he himself reversed the order of his given names.

62. Villainous visage : LEER
“Visage” is the French word for “face”, and is a term we’ve imported into English to mean “face” or “facial expression”.

63. Aftermarket options : ADD-ONS
Aftermarket merchandise is sold to a consumer who has already purchased some “seed” product. I suppose a warranty on DVD player would be an example.

Down
1. It’s between B.C. and Sask. : ALB
Alberta is a big province, about the size of Texas. Alberta is named after Princess Louise Caroline Alberta, the fourth child of Queen Victoria and Prince Albert. Princess Louise also donated her name to Lake Louise, the large glacial lake in the province, now withing the bounds of Banff National Park.

2. Cooking wine : MARSALA
Marsala is a seaport lying in the very west of Sicily. If you visit Marsala, you’ll find what’s called “vintage” Marsala wine, a “regular” red wine. If you buy a bottle of Marsala at your local store though, it will be a fortified wine, wine with a higher alcohol content.

4. Parasailers, e.g. : SOARERS
Parasailing is hanging below a tethered parachute that is towed by a boat.

6. Kiss interrupter, maybe : AHEM
If one walks in on a couple kissing, a polite “ahem!” might be appropriate.

7. Rod Stewart’s “Maggie May,” for one : SIDE B
The English singer Rod Stewart first achieved success with the Jeff Beck Group in the late sixties before launching a solo career while recording with a new lineup called Faces. Stewart is an ardent soccer fan, and actually supports the Scottish national team (Rod’s father was Scottish). Stewart plays the game himself, playing for a team called the LA Exiles along with a few other celebrities. He even kicks autographed soccer balls into the audience at his concerts.

“Maggie May” is a wonderful 1971 song recorded and co-written by Rod Stewart. Stewart tells us that the story told in “Maggie May” is basically true, and was inspired by the first woman with whom Stewart had a relationship, at the Beaulieu Jazz Festival in 1961.

9. “Tristram Shandy” novelist : STERNE
Laurence Sterne is best known for his novel, “The Life and Opinions of Tristram Shandy, Gentleman”. It is an epic work, published in nine volumes over ten years.

10. Outer ear : AURICLE
“Auricle” is an alternative term for the pinna, the visible part of the ear that sits outside of the head.

Pinna is a the anatomical name for the outer ear, the fleshy part that resides outside the head. “Pinna” is the Latin for “feather” and is used anatomically for a wing, fin or other external appendage.

12. Reagan cabinet member who was previously counselor to the president : ED MEESE
Ed Meese was born in Oakland, California just down the road here and spent 24 years in the office of the Treasurer of Alameda County, the county in which I live. After military service, Meese earned himself a law degree at UC Berkeley. Later, as Chief of Staff for President Reagan, he was instrumental in a famous decision to crack down on student protesters at Berkeley which resulted in one protester dying and a two-week occupation of the city by the California National Guard.

26. Broadband inits. : DSL
The acronym “DSL” originally stood for Digital Subscriber Loop, but is now accepted to mean (Asymmetric) Digital Subscriber Line. DSL is the technology that allows Internet service be delivered down the same telephone line as voice service, by separating the two into different frequency signals.

29. Habitual drunkard : ROUNDER
A “rounder” is a habitual drunk, with the term referring to the habit of turning up in bars, over and over.

36. Manhunt letters : APB
An All Points Bulletin (APB) is a broadcast from one US law enforcement agency to another.

37. Seven Sisters college : BARNARD
Barnard College is private women’s school in New York City. Barnard was founded in 1889 and since 1900 has been affiliated with Columbia University.

39. 46-Down’s partner : YOKO ONO
(46D. A Beatle : LENNON)
Yoko Ono is an avant-garde artist. Ono actually met her future husband John Lennon for the first time while she was preparing her conceptual art exhibit called “Hammer a Nail”. Visitors were encouraged to hammer in a nail into a wooden board, creating the artwork. Lennon wanted to hammer in the first nail, but Ono stopped him as the exhibition had not yet opened. Apparently Ono relented when Lennon paid her an imaginary five shillings to hammer an imaginary nail into the wood.

41. Radiant light around the head : AUREOLE
“Aureole” is the name given to the radiant cloud depicted around the head of a sacred character depicted in some religious paintings. “Aureole” comes from the Latin word “aureus” meaning “golden”.

42. *Like Pisces, in the zodiac : B(LAST)ED
The last astrological sign of the zodiac is called Pisces, which is named for the Pisces constellation. “Pisces” is the Latin word for “fish” in the plural (singular “piscis”).

46. A Beatle : LENNON
John Lennon was shot and killed by Mark David Chapman in New York City in December 1980. Chapman’s lawyers wanted him to file an insanity plea but instead he chose to plead guilty and was sentenced to life in prison, with eligibility for parole after 20 years. Chapman has been denied parole every two years since 2000 and is still an inmate of Attica State Prison.

55. Swiss Surrealist : KLEE
The artist Paul Klee was born in Switzerland, but studied art in Munich in Germany. You can see many of Klee’s works in the San Francisco Museum of Modern Art, and if you get to Bern in Switzerland, even more of them can be seen at the Zentrum Paul Klee that was opened in 2005.

56. Blues rocker Chris : REA
Chris Rea is a singer-songwriter and respected blues guitar player from England. Rea’s biggest hit is a song that he wrote himself called “Fool (If You Think It’s Over”), released in 1978.

59. Like pinot grigio : DRY
Pinot gris is a wine grape used to make white wine called Pinot gris, which is also known as Pinot grigio. DNA analysis has shown that the Pinot gris grape mutated from the Pinot noir variety.