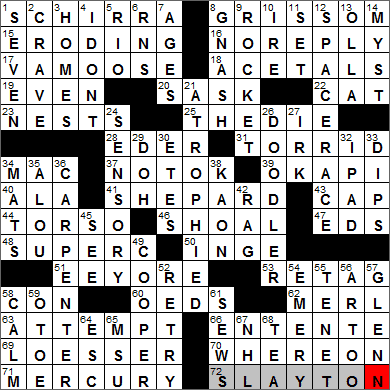 Today’s Wiki-est, Amazonian Googlies
Across
1. WALLY : SCHIRRA
Wally Schirra was one of the original Mercury Seven astronauts. He was the only astronaut who flew in the Mercury, Gemini and Apollo Programs. Schirra retired after commanding the Apollo 7 mission, and took the seat beside Walter Cronkite for the TV coverage for the seven moon landings. Schirra was a naval officer. After he passed away in 2007, his body was cremated and his ashes were committed to the deep in a burial at sea ceremony on the aircraft carrier USS Ronald Reagan.

8. GUS : GRISSOM
Gus Grissom was the second American to fly in space, and the first astronaut at NASA to make two space flights. Sadly, Grissom was one of the three astronauts who died in a terrible launch pad fire in 1967.

18. Volatile solvents : ACETALS
Acetals are a class of organic compounds, the smaller of which are volatile solvents. The simplest of the group is named acetal, which is a solvent and ingredient used in cosmetics. A much larger example of an acetal is cellulose.

22. Burmese, for one : CAT
Most Burmese cats today can be traced back to a single ancestor, a female cat given the name Wong Mau that was brought from Burma to America in 1930. Amazing …

23. Sites for kites : NESTS
Kites are birds of prey that feed mainly on carrion.

25. What is cast, in a saying : THE DIE
Supposedly, when Caesar marched back to Rome from Gaul, as he defiantly “crossed the Rubicon” with his army, he uttered the words “Alea iacta est” (“The die is cast”).

28. River of Hesse : EDER
The Eder is a river in Germany, a tributary of the Fulda River. The Eder has a dam near the small town of Waldeck which holds water in the large Edersee reservoir. This was one of the dams that was attacked by the RAF during WWII with the famous Barnes Wallis bouncing bombs. It was destroyed in the Dam Busters raid in 1943, but rebuilt the same year.

31. Not just hot : TORRID
Our word “torrid” means “very hot, steamy”. The term is derived from ”the torrid zone”, a name given in the 1500s to that part of the Earth found between the tropics.

34. Bub : MAC
“Bub” is American slang, a term used to address males, and is possibly a variation of bud.

39. Animal with stripes : OKAPI
The okapi is closely related to the giraffe, although it does have markings on its legs and haunches that resemble those of a zebra. The okapi’s tongue is long enough to reach back and wash its eyeballs (eek!), and can go back even further to clean its ears inside and out.

41. ALAN : SHEPARD
Alan Shepard was the first American in space. Shepard’s flight was originally scheduled for October 1960 but a series of delays pushed it out till May 5, 1961. Yuri Gagarin made his celebrated flight on April 12, 1961, just one one month earlier, winning that part of the Space Race for the Soviets.

44. Many a classical sculpture : TORSO
“Torso” (plural “torsi”) is an Italian word meaning the “trunk of a statue”, a word that we imported into English.

48. Very high trumpet note : SUPER C
The Super C is the name given to a very high note, often the top note, on some musical instruments, most notably the trumpet.

50. “Splendor in the Grass” screenwriter : INGE
Playwright William Inge had a run of success on Broadway in the early fifties. Inge’s most celebrated work of that time was the play “Picnic”, for which he was awarded a Pulitzer Prize. The original 1953 cast of “Picnic” included a young male actor making his debut on Broadway. His name was Paul Newman. Many of Inge’s works are set in the American heartland and so he became known as the “Playwright of the Midwest”.

“Splendor in the Grass” is a 1961 film with an Oscar winning screenplay by William Inge. The film stars Natalie Wood and Warren Beatty, and even Inge himself makes a brief appearance as a clergyman.

51. Gloomy donkey of fiction : EEYORE
Eeyore is the donkey character in A. A. Milne’s “Winnie-the-Pooh”. Eeyore is very lovable, but has a gloomy and pessimistic outlook on life.

58. Caller on a cell phone? : CON
A convict (con) might leave his or her cell to make a phone call.

60. Library refs. : OEDS
The “Oxford English Dictionary” (OED) contains over 300,000 “main” entries and 59 million words in total. It is said it would take a single person 120 years to type it out in full. The longest entry for one word in the second edition of the OED is the verb “set”. When the third edition was published in 2007, the longest entry for a single word became the verb “put”. Perhaps not surprisingly, the most-quoted author in the OED is William Shakespeare, with his most quoted work being “Hamlet”. The most-quoted female author is George Eliot (aka Mary Ann Evans).

62. Keyboardist Saunders : MERL
Merl Saunders was a piano and keyboard musician. Saunders was good friends with Jerry Garcia and often played with the Grateful Dead.

66. International agreement : ENTENTE
An “entente cordiale” (sometimes just “entente”) is a friendly understanding, usually between two nations. The term, which translates from French as “cordial agreement”, was first used to describe a set of agreements between the UK and France in 1904.

69. “Luck Be a Lady” composer/lyricist : LOESSER
Frank Loesser was a songwriter who was famous for penning both lyrics and music for the Broadway show “Guys and Dolls” and “How To Succeed In Business Without Really Trying”. Loesser also wrote the marvelous song “Baby, It’s Cold Outside”.

“Luck Be a Lady” is a song written by Frank Loesser for his Broadway musical “Guys and Dolls” that premiered in 1950. Some years later, “Luck Be a Lady” became a signature song for Frank Sinatra.

70. “I envy Seas, ___ He rides”: Emily Dickinson : WHEREON
“I envy seas whereon he rides” is the first line of a love poem by Emily Dickinson. The poem starts with:

I ENVY seas whereon he rides,
I envy spokes of wheels
Of chariots that him convey,
I envy speechless hills

That gaze upon his journey;
How easy all can see
What is forbidden utterly
As heaven, unto me! rides

71. With 1-Down, first American astronauts : MERCURY
(1A. See 71-Across : SEVEN)
The Mercury Seven was the name given to the original lineup of NASA astronauts. Members of the 7-man team actually flew on all the major NASA programs: Mercury, Gemini, Apollo and the Space Shuttle. The seven astronauts were:

72. DEKE : SLAYTON
WWII pilot Deke Slayton was chosen as one of the original Mercury Seven astronauts, but he never flew in that program as he was grounded when it was discovered that he had a heart murmur. Famously, Slayton was then made NASA’s director of flight crew operations from 1963 to 1972. He eventually was cleared medically so that he went into space as docking module pilot on the 1975 Apollo-Soyuz Test Project. Slayton was 51 years old when he flew, making him the oldest person to fly in space up to that time.

Down
5. 2016 Olympics city : RIO
Even though the 2016 Olympic Games is a “summer” competition, it will be held in Rio de Janeiro in the winter. As Rio is in the southern hemisphere, the planned date of the opening of 5th August 2016 falls in the local season of winter. The 2016 games will also be first to be held in South America, and the first to be hosted by a Portuguese-speaking country.

6. E.R. personnel : RNS
Registered nurses (RNs) might be found in an operating room (OR) or emergency room (ER).

12. Old U.S./Soviet rivalry : SPACE RACE
The Soviet Union launched the Sputnik satellite towards the end of 1957, a development that shocked the establishment in the US. Within months, President Eisenhower created the Advanced Research Projects Agency (ARPA, now DARPA) and the National Aeronautics and Space Administration (NASA). The Space Race has begun …

13. It’s a crock : OLLA
An olla is a traditional clay pot used for the making of stews. “Olla” was the Latin word used in Ancient Rome to describe a similar type of pot.

14. Best-selling PC game of the 1990s : MYST
In the days when I played the occasional video game, the best of the bunch was undoubtedly “Myst”. It is a game full of puzzles with the player wandering through a beautifully-designed (for its day) interactive world.

29. Play-___ : DOH
Back in the 1930s, a manufacturer in Cincinnati produced a doughy compound that was used to clean wallpaper. Twenty years later, school-kids started using the cleaning material as a modelling compound, so the manufacturer reworked the formula, and sold it to local schools. It was given the name Play-Doh.

35. Baseball family name : ALOU
Felipe Alou is a former professional baseball player and manager. Alou managed the Montreal Expos from 1992 to 2001, and the San Francisco Giants from 2003 to 2006. Alou was born and raised in the Dominican Republic and came to the US to play for the Giants in 1955. Felipe’s brothers Matty and Jesús followed him to the US, and into Major League baseball.

36. SCOTT : CARPENTER
Scott Carpenter was the fourth American in space, one of the original Mercury Seven astronauts. After his career as an astronaut, Carpenter became an aquanaut. He spent 28 days living on the ocean floor in 1965 as a member of the team in SEALAB II.

49. GORDON : COOPER
Gordon Cooper was an American astronaut who went into space as part of both the Mercury and Gemini Programs. Cooper had the honor of being the first American to have a snooze in space!

54. File material : EMERY
Emery is a very hard type of rock that is crushed for use as an abrasive. Emery paper is made by gluing small particles of emery to paper. Emery boards are just emery paper with a cardboard backing. And emery boards are primarily used for filing nails.

55. Guiding belief : TENET
A tenet is an article of faith, something that is held to be true. “Tenet” is Latin for “he holds”.

57. JOHN : GLENN
John Glenn is a retired Marine Corps pilot, astronaut and US Senator. As an astronaut, Glenn was the first American to orbit the earth, in 1962, and later became the oldest person to fly in space, in 1998.

59. Plains tribe : OTOE
The Native American people known as the Otoe were the first tribe encountered by the Lewis and clark Expedition. The meeting took place at a point on the Missouri River that is now known as Council Bluff.

65. Where Magic Johnson played college ball, for short : MSU
Michigan State University (MSU) is located in East Lansing, Michigan. MSU has the largest study-abroad program of any single-campus university in the US. Programs are offered on all continents of the world, including Antarctica.

67. Org. with Sharks and Predators : NHL
The San Jose Sharks hockey team play their home games at the HP Pavillion in San Jose, a venue that we locals call “the Shark Tank”.

The Predators are the National Hockey League team based in Nashville, Tennessee.