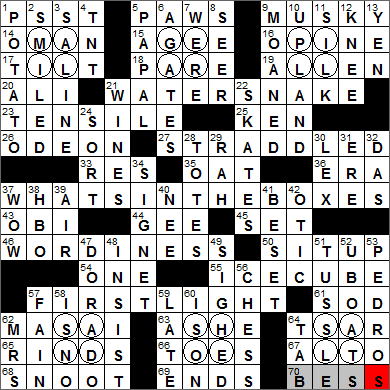 CROSSWORD SETTER: John E. Bennett
THEME: Boxes … the circled (or shaded) squares form BOXES in the grid, and the letters in those BOXES spell different types of BOXES:

37A. Question asked by a customs officer or a kid on Christmas … with a hint to this puzzle’s shaded squares : WHAT’S IN THE BOXES?

Today’s Wiki-est, Amazonian Googlies
Across
9. Like some scents for men : MUSKY
Musk has such an elegant connotation these days because of it’s use in the world of perfumery. However, its origin is not quite so glamorous. The original substance called musk, used in perfumes, was extracted from a gland in the rectal area of the male musk deer. The name “musk” is a Sanskrit word for “testicle”.

15. James who won a posthumous Pulitzer : AGEE
James Agee was a noted American film critic and screenwriter. Agee wrote an autobiographical novel “A Death in the Family” that won him his Pulitzer in 1958, albeit posthumously. He was also one of the screenwriters for the 1951 classic movie “The African Queen”.

17. Knight’s contest : TILT
Tilting is the most recognized form of jousting. Jousting can involve the use of a number of different weapons, but when lances are used the competition is called “tilting”. Jousting took place in a roped-off enclosure that was called the lists, or list field. In later medieval times, some castles and palaces had purpose-built “tiltyards” that were used for jousting. Do you remember where the Beach Volleyball events were held in the 2012 London Olympics. Well that was Horse Guards Parade, the former tiltyard for the Palace of Whitehall that was used in the time of King Henry VIII.

19. ___ wrench : ALLEN
The Allen wrench (or “Allen key”, as we call it back in Ireland) is a successful brand of hex wrench that was trademarked in 1943 by the Allen Manufacturing Company of Hartford , Connecticut. However, the hex wrench had in fact been around since the mid-to-late 1800s.

20. Will Smith biopic : ALI
“Ali” is a 2001 biographical movie about Muhammad Ali, with Will Smith in the title role. Among other things, the film is noted for its realistic fight scenes. The scenes were realistic because Smith was really being hit, as hard as his opponents could manage.

21. Cottonmouth, e.g. : WATER SNAKE
“Cottonmouth” is one of the common names of a venomous pit viper that native to the southeastern US. The cottonmouth is a strong swimmer and is usually found in or near water. Another common name for the species is “water moccasin”.

25. Trivia whiz Jennings : KEN
Ken Jennings is a remarkable man, the person who had the longest winning streak on television’s “Jeopardy”. He was defeated after 75 appearances on the show, after racking up over $2.5 million in the prior episodes.

A pixel is a dot, the base element that goes to make up a digital image.

43. “The Mikado” accessory : OBI
The sash worn as part of traditional Japanese dress is known as an obi. The obi can be tied in what is called a butterfly knot.

45. Prepare for a spike, in volleyball : SET
In volleyball, each team can only touch the ball a maximum of three times before it returns to the other side of the net. The three contacts are often a bump and a set followed by a spike.

62. Seminomadic Kenyan : MASAI
The Masai (also “Massai”) are a semi-nomadic people found in Kenya and Tanzania. They are semi-nomadic in that over the years they have been migrating from the Lower Nile Valley in northwest Kenya, and are moving into Tanzania.

63. New York’s ___ Stadium : ASHE
The Arthur Ashe Stadium in Queens, New York opened in 1997 and is the largest outdoor, tennis-only venue in the world. The stadium is sometimes criticized for not having a retractable dome to protect the playing surface from inclement weather.

64. Title derived from the name “Caesar” : TSAR
The term czar (also tsar) is a Slavic word that was first used as a title by Simeon I of Bulgaria in 913 AD. “Czar” is derived from the word “Caesar”, which was synonymous with “emperor” at that time.

65. Ingredients in old-fashioneds : RINDS
The cocktail called an Old Fashioned is usually made from whiskey or brandy that is muddled with sugar and bitters, and then a twist of citrus rind added.

67. Mezzo’s choirmate : ALTO
In choral music, an alto is the second-highest voice in a four-part chorus made up of soprano, contr(alto), tenor and bass. The word “alto” describes the vocal range, that of the deepest female singing-voice, whereas the term “contralto” describes more than just the alto range, but also its quality and timbre. An adult male’s voice (not a boy’s) with the same range as an alto is called a “countertenor”.

A mezzo-soprano is a female singing voice below a soprano but above a contralto. “Mezzo” is Italian for “half”.

68. Stuck-up sort : SNOOT
“Snoot” is a variant of “snout” and is a word that originated in Scotland. The idea is that someone who is “snooty”, or snouty, tends to look down his or her nose at the rest of the world.

69. Some linemen : ENDS
In American football, linemen specialize in playing in the line of scrimmage.

70. First lady before Mamie : BESS
Harry and Bess Truman met when they were very young children, at Sunday school. They were friends right through high school and became engaged in 1918 just before Harry went off to France during WWI, marrying the next year. Bess Truman never really took to the Washington scene when she became First Lady and stayed out of the limelight as much as she could. Perhaps that contributed to her longevity. Mrs. Truman lived to the age of 97, making her the longest living First Lady in US history.

Down
1. Latke component : POTATO
A latke is a delicious potato pancake (I’m Irish … so anything made with potato is delicious!).

2. Heeded the photographer, say : SMILED
Photographers often instruct us to say “cheese”, to elicit a smile-like expression. Even Japanese photographers use the word “cheese” for the same effect. Bulgarians use the word “zele” meaning “cabbage”. The Chinese say “eggplant”, the Danish “orange”, the Iranians “apple” and the most Latin Americans say “whiskey”.

4. Blasting stuff : TNT
TNT is an abbreviation for trinitrotoluene. Trinitrotoluene was first produced in 1863 by the German chemist Joseph Wilbrand, who developed it for use as a yellow dye. TNT is relatively difficult to detonate so it was on the market as a dye for some years before its more explosive properties were discovered.

5. ___ States : PAPAL
The Papal States were territories located in modern-day Italy that for centuries were under the direct rule of the pope in Rome. The age of the Papal States came to an end in 1870 as Italian nationalism took control of the country. There followed decades when the papacy confined itself to the Apostolic Palace and adjacent buildings in Rome on Vatican Hill. The situation was resolved in 1929 when Pope Pius XI renounced the Papal States in exchange for the creation of the State of the Vatican City.

6. Banded gemstones : AGATES
Agate is a micro-crystalline form of quartz (so is related to sand/silica). Some agate samples have deposited layers that give a striped appearance, and these are called “banded agate”.

11. Product of a domesticated insect : SILK
Silk is a fiber made from natural protein, and is produced by insect larvae. The best-known silk is made by the larvae of the mulberry silkworm. The term “silk” comes from “si”, the Chinese word for the material.

13. Its banknotes have denominations from 1,000 to 10,000 : YEN
The Korean Won, the Chinese Yuan, and the Japanese Yen (all of which are Asian currencies) take their names from the Chinese written character that represents “round shape”.

22. Roller derby need : SKATES
The sport of roller derby has an international footprint, with almost half the world’s teams being located outside of the US. Most of the teams playing the sport are all-female.

28. Schleps : TOTES
Our word “schlep” means “to carry, drag”. “Schlep” comes from Yiddish, with “shlepen” having the same meaning in that language.

30. N.Y.C. ave. parallel to Park and Madison : LEX
Lexington Avenue in New York City is famous from many things, but my favorite fact is that it was the site of the first ever arrest for speeding in the city. In 1899 a police officer on a bicycle caught up with a cabdriver who was tearing down Lexington Avenue at the breakneck speed of 12mph …

34. Seal engraved on a ring : SIGNET
A signet is a seal, in particular one used by an official to mark a document. A signet can be incorporated into a “signet ring”.

40. Word in many a woman’s bio : NEE
“Née” is the French word for “born” when referring to a female. The male equivalent is “né”.

47. El ___ (fabled city) : DORADO
The original El Dorado was a Muisca chief who was covered with gold dust in a tribal ritual and then dove into Lake Guatavita in present-day Colombia. Later, “El Dorado” was adopted as the name for a mythical “Lost City of Gold” that became a quest from many Spanish Conquistadors who explored the Americas.

52. W.W. II threats : U-BOATS
U-boat stands for the German “Unterseeboot” (undersea boat). U-boats were primarily used in WWII to enforce a blockade against enemy commercial shipping, with a main objective being to cut off the supplies being transported to Britain from the British colonies and the US. The epic fight for control of the supply routes became known as the Battle of the Atlantic.

53. Three-time Cy Young winner Martinez and others : PEDROS
Pedro Martinez is a retired baseball pitcher from the Dominican Republic. Martinez won the Cy Young Award three times, and was on the Boston Red Sox team that won the 2004 World Series.

56. Magnus Carlsen’s game : CHESS
Magnus Carlsen is a chess grandmaster from Norway who is the current World Chess Champion. Carlsen achieved world no. 1 ranking for the first time in 2010 when he was just 19 years of age, making him the youngest player ever to be so honored.

57. “April Love” composer Sammy : FAIN
Sammy Fain was a composer of popular music from New York City. Fain mainly collaborated with lyricist Irving Kahal. Two of Fain’s more famous compositions are “Secret Love” (a favorite of mine) from “Calamity Jane” and the title song from the movie “Love Is a Many-Splendored Thing”.

“April Love” is the theme song for the 1957 film of the same name that was a number-one hit for Pat Boone. Pat Boone stars in the film, opposite Shirley Jones.