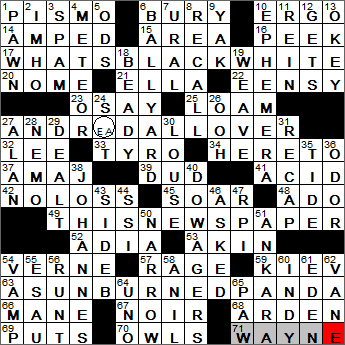 CROSSWORD SETTER: Dan Schoenholz
THEME: Red or Read … the circled square in today’s grid can be filled with either “EA” or “E”, giving us two different versions of the same-sounding riddle. Further down the grid we have the two answers to those two versions of the riddle:

Today’s Wiki-est, Amazonian Googlies
Across
1. ___ Beach, city near San Luis Obispo : PISMO
Pismo Beach is a California city located just 15 miles south of San Luis Obispo. The name “Pismo” comes from a Native American word “pismu” meaning “tar”, a reference to tar springs that are located in nearby Price Canyon. The tar was used by the locals to caulk their canoes.

20. U.S. city known to some locals as Siqnazuaq : NOME
Nome, Alaska has over 3,500 residents, the majority of whom are Native American. The next largest ethnic group in Nome is the white population.

23. Starting words at many a sporting event? : O SAY
“O say can you see by the dawn’s early light” us the opening line of “The Star Spangled Banner” by Francis Scott Key.

32. “To Kill a Mockingbird” author : LEE
Harper Lee’s Pulitzer Prize-winning novel “To Kill A Mockingbird” was first published in 1960. The book is a mainstay in English classes all around the world and is a great ambassador for American literature, I’d say.

33. One on probation, maybe : TYRO
A tyro (also tiro) is a beginner or a novice. “Tyro” comes into English from Latin, in which “tiro” means “a recruit”.

37. Key of Beethoven’s Symphony No. 7: Abbr. : A-MAJ
If I had to name which of Beethoven’s symphonies I listen to most often, at the top of the list comes the 7th followed closely by the 9th, and then the 5th a little further down. But that four-note opening of the 5th … that is superb …

48. Kerfuffle : ADO
“Kerfuffle” comes from the Scottish “curfuffle”, with both words meaning “disruption”.

52. 1998 Sarah McLachlan hit : ADIA
Apparently the song “Adia”, co-written by Sarah McLachlan, was intended as an apology to her best friend … for stealing her ex-boyfriend and then marrying him!

54. Author of the quote “I am not what you call a civilized man!” : VERNE
Jules Verne really was a groundbreaking author. Verne pioneered the science fiction genre, writing about space, air and underwater travel, long before they were practical and proved feasible. Verne is the second most translated author of all time, with only Agatha Christie beating him out.

59. Capital in 2004-05’s Orange Revolution : KIEV
The Orange Revolution of 2004/2005 was a series of protests that followed a supposedly corrupt election in Ukraine. Largely as a result of the civil upheaval there was a revote, which international observers deemed to be fair. The result remained unchanged, with Viktor Yushchenko being elected Ukrainian president for another term.

67. Dark genre : NOIR
The expression “film noir” has French origins, but only in that it was coined by a French critic in describing a style of Hollywood film. The term, meaning “black film” in French, was first used by Nino Frank in 1946. Film noir often applies to a movie with a melodramatic plot and a private eye or detective at its center. Good examples would be “The Big Sleep” and “D.O.A”.

68. Where Rosalind becomes Ganymede, in Shakespeare : ARDEN
The Forest of Arden is the setting for Shakespeare’s “As You Like It”. Even though there is a Forest of Arden surrounding Shakespeare’s home town of Stratford-on-Avon, seeing as the play is set in France one has to assume that the “As You Like It” Arden is an Anglicization of the forested “Ardennes” region that stretches from Belgium into France,and that famously featured in WWII’s Battle of the Bulge.

The heroine of Shakespeare’s play “As You Like It” is Rosalind. Rosalind flees her uncle’s court in the guise of a man called Ganymede. She finds refuge in the Forest of Arden, and also finds love.

In the play “As You Like It”, there is a speech that yields one of the most-quoted phrases written by William Shakespeare, namely “all the world’s a stage”:

71. Detroit’s county : WAYNE
The city of Detroit is known worldwide as the capital of the automotive industry. However, times have been hard in recent years and the city’s population dropped by about 25% from 2000 to 2010 as locals moved to the suburbs and beyond in search of work.

Down
2. Modern “methinks” : IMHO
In my humble opinion (IMHO)

3. Filter target : SPAM
Apparently the term “SPAM”, used for unwanted email, is taken from a “Monty Python” sketch. In the sketch (which I’ve seen) the dialog is taken over by the word SPAM, a play on the glut of canned meat in the markets of Britain after WWII. So “SPAM” is used for the glut of emails that takes over online communication. I can just imagine nerdy Internet types (like me) adopting something from a “Monty Python” sketch to describe an online phenomenon …

4. Luminary in a late-night show? : METEOR
A shooting star is what we call the visible path of a meteoroid as is it enters the earth’s atmosphere. Almost all meteoroids burn up, but if one is large enough to survive and reach the ground, we call it a meteorite. The word “meteor” comes from the Greek “meteōros” meaning “high in the air”.

7. Russian river : URAL
The Ural River rises in the Ural Mountains in Russia and flows for half its length through Russian territory until it crosses the border into Kazakhstan, finally emptying into the Caspian Sea.

8. Special election : RECALL
A “recall election” is one in which an attempt is made by the voters to remove an incumbent before his or her term has ended. The most famous recall election here in California was the one that removed Governor Gray Davis in 2003. Davis was replaced by Governor Arnold Schwarzenegger.
.
10. Time-sensitive items : EPHEMERA
“Ephemera” was originally a medical term, used to describe a fever that only lasted a day. The use of the term was expanded in the 17th century to include insects that were “short-lived”, and by end of the 18th century “ephemera” were any things of transitory existence.

12. Savvies : GETS
The term “savvy”, meaning “understanding”, comes from the French “savez-vous?” that translates as “do you know?”

27. One of the men on “Two and a Half Men” : ALAN
“Two and a Half Men” is a TV sitcom that is remarkably successful despite being fraught with controversy. The eighth season had to be suspended when the show’s star Charlie Sheen went into drug rehab and made disparaging comments about the show’s producers. Sheen was fired, and his role was taken over by a new character played by Ashton Kutcher. In 2012, Angus T. Jones who plays young Jake urged fans not to watch the show as it was “filth”. Jones had recently converted to the Seventh-day Adventist Church, and the show’s themes clashed with the church’s standards. Well, I enjoy the show …

28. Fictional character who says “I am not what you call a civilized man!” : NEMO
In the 1954 movie version of “20,000 Leagues Under the Sea”, Captain Nemo goes down with his ship. In the novel by Jules Verne the fate of Nemo and his crew isn’t quite so cut and dry, although the inference is perhaps that they did indeed head for Davy Jones’ Locker.

35. ‘Bama, with “the” : TIDE
The athletic teams of the University of Alabama (“Bama”) are nicknamed the Crimson Tide, a reference to the team colors: crimson and white.

38. Artist Vermeer : JOHANNES
Johannes Vermeer was born in the city of Delft in 1632, and died there some 43 years later. I just love Vermeer’s paintings, and his wonderful use of light. A great example of such a work is his “Girl with a Pearl Earring”. If you haven’t seen it, I thoroughly recommend the 2003 movie “Girl with a Pearl Earring” starring Scarlett Johansson as the girl in the painting, and Colin Firth as Vermeer. The movie is based on a novel of the same name by Tracy Chevalier, so it’s all just a great story as opposed to a documentary. The way the movie is shot really reflects the qualities of a Vermeer work of art. And, my wife and i are planning on taking a peek at the original painting “Girl with a Pearl Earring” in a couple of weeks as it is visiting one of our galleries here in San Francisco.

40. Violet Crawley of “Downton Abbey,” and others : DOWAGERS
Originally, a dowry was money that was set aside by a man for his wife and children, to be used in the event that he passed away. A widow who receives said money was known as a “dowager”. Over time, “dowry” became a term used for the money, goods or estate that a woman brought into a marriage.

43. Elvis’s “Viva Las Vegas,” recordwise : SIDE-B
“Viva Las Vegas” is a 1963 song that was recorded by Elvis Presley for his film of the same name.

“Viva Las Vegas” is an Elvis Presley movie released in 1964, considered to be one of his best films. The good reception for the movie was at least in part due to the performance of the female lead, Ann-Margret.

47. Sch. near Albany, N.Y. : RPI
The Rensselaer Polytechnic Institute (RPI) is a private school in Troy, New York. The university is named after its founder Stephen Van Rensselaer who set up the school in 1824. The goal of RPI has always been the “application of science to the common purposes of life”, an objective set by the founder. Given that, the name for the school’s sports teams is quite apt, namely “the Engineers”.

51. Site of the Museum of Anatolian Civilizations : ANKARA
Ankara is the second largest city in Turkey, after Istanbul (formerly Constantinople). After WWI, the Ottoman Empire had been defeated and the Allies occupied the Ottoman capital of Istanbul. The victors planned to break up most of Turkey, leaving native Turks just part of their country for their own. In the inevitable War of Independence that followed, the Turkish Nationalists used Ankara as their base. When the Nationalists emerged victorious, they declared Ankara the new capital of Turkey.

54. Seductress : VAMP
A “vamp” (short for vampire) is a seductive woman.

55. Genesis man : ESAU
Esau, was the grandson of Abraham and the twin brother of Jacob, the founder of the Israelites. When Esau was born to Isaac and Rebekah, the event was described, “Now the first came forth, red all over like a hairy garment”. Esau is portrayed later in life as being very different from his brother, as a hunter and someone who loves the outdoor life.

56. Little sucker? : RUNT
Back around 1500. a runt was an old or decayed tree stump, and by the early 1600s “runt” was being used to describe animals that were similarly old and decayed. Ultimately “runt” came to mean the smallest and often sickest in a litter.

58. Blue dye source : ANIL
Anil is another name for the indigo plant, as well as the name for the blue indigo dye that is obtained from it. The color of anil is relatively close to navy blue.

60. May race, informally : INDY
The first Indy 500 race was held on Memorial Day in 1911. The winner that day was one Ray Harroun. Harroun had seen someone using a rear view mirror on a horse-drawn vehicle, and decided to fit one on his Marmon “Wasp” motor car. Supposedly that was the first ever use of a rear view mirror on a motor vehicle.

61. Genesis place : EDEN
According to the Book of Genesis, Adam and Eve lived in a garden “in” Eden, with Eden being geographically located by reference to four rivers including the Tigris and the Euphrates. Some scholars hypothesize that Eden was located in Mesopotamia, which encompasses much of modern-day Iraq.