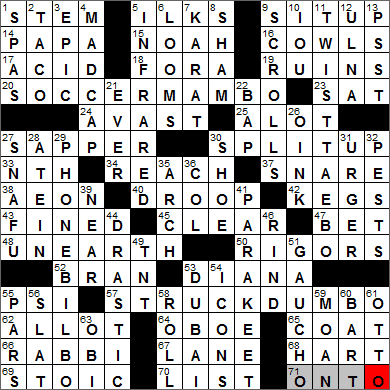 CROSSWORD SETTER: Jeff Stillman
THEME: Plus Bo Sound … each of today’s themed answers sounds like a well-known phrase with the letters BO added:

Today’s Wiki-est, Amazonian Googlies
Across
14. One of the Smurfs : PAPA
The Smurfs are little blue men created by a Belgian cartoonist in 1958. The Smurfs became famous in the US when Hanna-Barbera used them in a children’s cartoon series. The characters are largely a group of males. The original lineup included just one “Smurfette”, who is wooed by almost all of the boy Smurfs. Later, another female was introduced into the mix called Sassette, and still later along came Granny Smurf.

15. Father of Ham : NOAH
According to the Book of Genesis, Noah lived to a ripe old age. Noah fathered his three sons Shem, Ham and Japheth when he was 500 years old, and the Great Flood took place when he was 600.

16. Monastery wear : COWLS
A cowl is a long garment with a hood that is primarily worn by monks in the the Christian tradition.

17. ___ rock : ACID
Acid rock is a musical genre, a subset of psychedelic rock. The term comes from the influence of the drug LSD (acid) on some compositions in the early days.

20. Celebration dance after a goal? : SOCCER MAMBO (“soccer mom” & “bo”)
The form of music and dance known as mambo developed in Cuba. “Mambo” means “conversation with the gods” in Kikongo, a language spoken by slaves taken to Cuba from Central Africa.

23. Sr.’s challenge : SAT
Today the standardized test for admission to colleges is known as the SAT Reasoning Test, but it used to be called the Scholastic Aptitude Test and Scholastic Assessment Test, which led to the acronym SAT.

24. “Stop!” : AVAST!
“Avast” is a nautical term used to tell someone to stop or desist from what they are doing. The word comes from the Dutch “hou vast” meaning “hold fast”.

27. Combat engineer : SAPPER
A “sapper” is a soldier whose job is to perform engineering duties, such as building bridges and laying minefields. The term “sapper” comes from the verb “to sap” meaning “to lay a trench”. “To sap” comes into English via French, from the Latin “sappa” meaning “spade”.

37. Part of a drum kit : SNARE
Snare drums are so called because they have a set of wire strands (called snares) stretched across the bottom surface of the drum. When the drum is struck, the snares vibrate against the bottom drumhead producing a unique sound.

38. Many millennia : AEON
Geological time is divided into a number of units of varying lengths. These are, starting from the largest:

The Soul Train Music Awards are presented annually for the best performances by African American entertainers. The awards take their name from the “Soul Train” musical variety show that rain for 35 years starting in 1971.

55. Letter before omega : PSI
The Greek letter psi is the one that looks a bit like a trident or a pitchfork.

Omega is the last letter of the Greek alphabet and is the one that looks like a horseshoe. The word “omega” literally means “great O” (O-mega). Compare this with the Greek letter Omicron meaning “little O” (O-micron).

57. Punched out a Disney elephant? : STRUCK DUMBO (“struck dumb” & “bo”)
The 1941 Disney animated film “Dumbo” was made a year after the feature called “Fantasia” was released. “Dumbo” was largely a commercial venture. The film was made quickly and released in theaters as soon as possible, the idea being to recoup the financial losses incurred by “Fantasia”.

64. Slender reed : OBOE
The oboe is perhaps my favorite of the reed instruments. The name “oboe” comes from the French “hautbois” which means “high wood”. When you hear an orchestra tuning before a performance you’ll note (pun intended!) that the oboe starts off the process by playing an “A”. The rest of the musicians in turn tune to that oboe’s “A”.

65. It may be checked, in more ways than one : COAT
One might check one’s check-pattern coat at the door for temporary safekeeping.

68. Politico Gary : HART
Gary Hart was serving as US Senator for the state of Colorado when he first ran for the Democratic nomination for president, in 1984. He made a second bid for the nomination in 1988. In the 1988 campaign, the polls showed that Hart was leading the pack when it came to light that he was having an extra-marital affair with actress and model Donna Rice. There was a famous photograph that surfaced at the time, showing Rice on Hart’s knee while the pair were in Bimini about the aptly named motor yacht “Monkey Business”.

69. Impassive : STOIC
Zeno of Citium was a Greek philosopher famous for teaching at the Stoa Poikile, the “Painted Porch”, located on the north side of the Ancient Agora of Athens. Because of the location of his classes, his philosophy became known as stoicism (from “stoa”, the word for “porch”). And yes, we get our adjective “stoic” from the same root.

Down
4. Like the Marx Brothers : MADCAP
The five Marx Brothers were born to “Minnie” and “Frenchy” Marx in New York City. The more famous older boys were Chico, Harpo and Groucho. Zeppo was the youngest brother, and he appeared in the early Marx Brothers movies. The fifth son was called Gummo, and he decided to pursue a different career off the stage.

5. Like some vision : INFRARED
At either end of the visible light spectrum are the invisible forms of radiation known as infrared (IR) light and ultraviolet (UV) light. IR light lies just beyond the red end of the visible spectrum, and UV light lie just below the violet end.

7. Gold standard : KARAT
A karat (also “carat”, the spelling outside of North America) is a measure of the purity of gold alloys, with 24-karat representing pure gold.

8. Its appearance is deceiving : SHAM
A sham is something that is imitation, fake. In the world of bed linens a sham is also imitation and fake, in the sense that it is a decorative cover designed to cover up a regular pillow used for sleeping.

9. Torahs, for example : SCROLLS
The word “Torah” best translates as “teaching”, I am told.

11. Aerobics done to Chubby Checker music? : TWIST TAE BO (“twist tie” & “bo”)
Tae Bo isn’t an ancient martial art, and rather was developed as a form of aerobic exercise in the 1990s. The discipline was introduced by taekwondo expert Billy Blanks who gave it the name Tae Bo, a melding of “taekwondo” and “boxing”.

The Twist is a dance that was born in the sixties, and was inspired by the Chubby Checker hit of 1960 called “The Twist”. Chubby Checker sang the song live in front of a crowd in Deland, Florida in October 2012. About 40,000 people danced along to the music, setting a new Guinness World Record for the most people “twisting” at the same time.

Ernest Evans was given the nickname “Chubby” by his boss at a produce market where he worked after school. When he went to make a recording for “American Bandstand” as Ernest Evans, Dick Clark’s wife asked what his friends called him. When she heard “Chubby”, she compared his name to that of “Fats” Domino. She then joked that “Checker” might be a better choice than Evans, given that Fats used “Domino”. And so, Chubby Checker was born.

12. Forearm bone : ULNA
The humerus is the long bone in the upper arm. The bones in the forearm are the radius and ulna. “Ulna” is the Latin word for “elbow”, and “radius” is Latin for “ray”.

President Jimmy Carter is a graduate of the US Naval Academy. Carter served in the Navy on surface ships and submarines, and chose to pursue a career in the submarine service as he was interested in nuclear power and believed it had a great future in submarine design. As a result, he became an expert in nuclear propulsion. In 1952, the Navy sent the young Carter to the Chalk River Laboratories in Canada to lead the US effort to shutdown the reactor after an accident and partial meltdown of a reactor core. He and his team had to be lowered into the leaking reactor core for mechanical disassembly, staying there for only seconds at a time to minimise exposure to radiation. Decades later as US President, it was this experience that influenced Carter’s decision not to complete the development of the neutron bomb.

27. Real mix-up : SNAFU
SNAFU is an acronym standing for Situation Normal: All Fouled Up (well, that’s the “polite” version!). As you might imagine, the term developed in the US Army, during WWII.

29. Give a hobbit a ring? : PHONE BILBO (“phone bill” & “bo”)
Bilbo Baggins is the main character in J. R. R. Tolkien’s fantasy novel “The Hobbit”, and a supporting character in Tolkien’s “The Lord of the Rings” trilogy.

32. Raid targets : PESTS
Raid insecticide has been killing bugs since 1956.

41. One known for talking back? : PARAKEET
Parakeets are a group of bird species that are small parrots. The most common type of parakeet that we see in pet stores is the budgerigar.

49. Channel with the catchword “Drama” : TNT
TNT stands for Turner Network Television. The TNT cable channel made a big splash in the eighties when it started to broadcast old MGM movies that had been “colorized”, not something that was a big hit with the public. In recent years, the TNT programming lineup is touted with the tagline “We Know Drama”, and includes shows like “Judging Amy”, “ER” and “Cold Case”.

53. Home of the Burj Khalifa, the world’s tallest building : DUBAI
Burj Khalifa is a spectacular skyscraper in Dubai, United Arab Emirates. It is the tallest man-made structure in the world, and has been so since the completion of its exterior in 2009. The space in the building came onto the market at a really bad time, during the global financial crisis. The building was part of a US$20 billion development of downtown Dubai that was backed by the city government which had to go looking for a bailout from the neighboring city of Abu Dhabi. The tower was given the name Burj Khalifa at the last minute, apparently as a nod to the UAE president Khalifa bin Zayed Al Nahyan who helped to broker the bailout.

58. Cinnabon purchase : ROLL
Cinnabon is a chain of stores that sell baked goods. The first Cinnabon store opened in 1985 in a suburb of Seattle Washington.

60. Former baseball commissioner Giamatti : BART
Bart Giamatti was the President of Yale University from 1978 to 1986. He was also the Commissioner of Major League Baseball for a few months in 1989 after having served as National League President from 1986 to 1989.

61. Comics canine : OTTO
Sgt. Snorkel (“Sarge”) is Beetle Bailey’s nemesis in the cartoon strip that bears his name. Snorkel has a dog called Otto that he dresses up to look just like himself. Otto started off as a regular dog, but artist Mort Walker decide to draw him more like his owner, and soon Otto became a big hit.

63. Kimono sash : OBI
The sash worn as part of traditional Japanese dress is known as an obi. The obi can be tied in what is called a butterfly knot.